In their first trip to the College Cup, the Fighting Irish clinch the championship with a 2-1 victory over Maryland. Light up the #1.

Share All sharing options for: National Champions: ND Men's Soccer Wins it All

Sunday afternoon, the no. 3 Irish (17-1-6) squared off against the no. 7 Maryland Terrapins (17-4-5) outside Philadelphia after winning against New Mexico on Friday, 2-0. Despite an early, game-ending injury to striker Vince Cicciarelli (collar bone), the Irish held off the Terps with goals from senior forward Leon Brown (with assists from Nick Besler and Luke Mishu) and senior defenseman and tri-captain Andrew O'Malley (assist from tri-captain Harrison Shipp).

From the Associated Press's summary of the match:

Notre Dame finished the season 17-1-6 to give 68-year-old coach Bobby Clark his first title in 27 years of coaching at Dartmouth, Stanford and Notre Dame.

Patrick Mullins, the nation's leading scorer, scored for Maryland (17-4-5). The Terrapins were trying to win their fourth national championship and third under coach Sasho Cirovski.

Harrison Shipp, a finalist for the MAC Hermann Trophy as the nation's best player, set up O'Malley's winning goal with a perfectly placed free kick in the 60th minute. O'Malley leaped for Shipp's kick and directed a header past goalkeeper Zack Steffen's outstretched arms.

Brown tied it at 1 in the 40th minute with a tough-angle shot. He entered the game as a reserve whenVince Cicciarelli was forced to leave with an injury in the 10th minute.

Mullins, Maryland's own Hermann Trophy finalist, opened the scoring for the Terrapins in the 35th minute.

Moments earlier, Mullins thought a penalty kick was warranted when his shot was cleared off the goal line by what looked to be the arm of Notre Dame's Patrick Hodan. But Hodan was not called for the hand ball and Mullins was able to collect the rebound and deposit a shot past goalkeeper Patrick Wall.

Mullins had 19 goals this season and finished his college career with 47, second in program history. In his four years at Maryland, the Terrapins have lost only two games in which he scored.

Check out OFD's Photo Gallery here or the one on UND.com right here. The game stats are available here. USA Today Sports has a fuller recap of the game here.

Here's goal number 1 from Leon Brown in the 40th minute, with assists from Besler and Mishu:

Here's goal number 2 for the Irish, which came in the 60th minute from Andrew O'Malley off a free kick from Harrison Shipp: 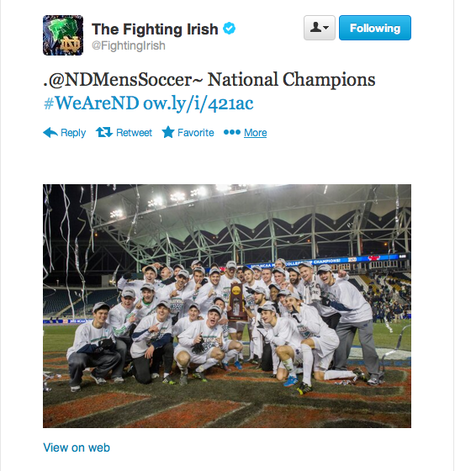 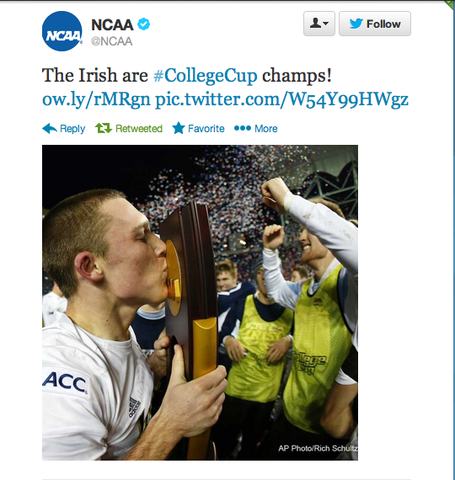 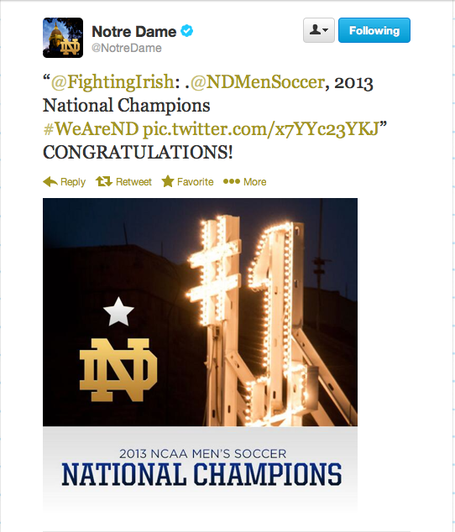 For those of you keeping track at home, that makes 28 national championships for the Fighting Irish: 11 for football, 8 for fencing, 3 for women's basketball, 2 tennis, 1 golf, 1 women's soccer, 1 cross country, and 1 amazing addition to that long list. Three cheers for Irish Men's Soccer.