Why Hermann Award finalist Harrison Shipp and his target man Vince Cicciarelli are the straw that stirs the drink for the Notre Dame Men's Soccer team.

While most of the time in the OFD Film Room is spent breaking down lines of scrimmage, defensive backfields, and playcalling, occasionally, I sneak the film equipment away from Larz and Burger and take an in-depth look into my first love, soccer. This past week was one of those times, with the Notre Dame Men's Soccer team entering their first ever College Cup tonight against the New Mexico Lobos.

In watching the Irish this season, it becomes apparent that all roads lead though Hermann Award (think Soccer's Heisman) finalist Harrison Shipp. He is truly the heartbeat of the attack for the Irish, and his strike partnership with Vince Cicciarelli is a prime example of one of the most well-established offensive tactics in soccer today: pairing a large, strong target forward alongside a withdrawn playmaker pulling the strings. 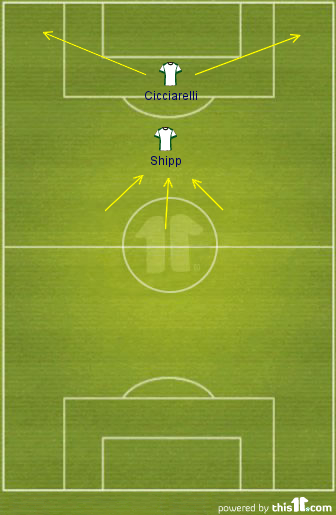 The basic responsibilities of each player are laid out in the diagram above. Cicciarelli's main job in this offensive strategy is to receive passes as the man furthest up the field. Oftentimes, he will be alone, with a defender draped all over him. This is where his size (6'2", 205lbs) becomes a huge advantage, as he is able to hold up the ball just long enough for Shipp (or another Irish midfielder) to present to the ball to make another pass to a player coming into the play, ready to attack the net. It is extremely important for the target forward to be able to find the ball as it is sent to either sideline as well, varying the point of attack and entry into the opposing team's final third. When the play doesn't go through the target forward, but instead goes up the wing (usually via an overlapping fullback), Cicciarelli's size again proves an advantage as a big target inside the penalty area ready to receive a cross.

Shipp's main role is to always be in the right spot, and be the link between the midfield and Cicciarelli. His ability to find space to receive a pass, then turn towards goal and find an attacking pass is uncanny. The Italians call this position the "trequartista" ("playmaker"), and the player is often responsible for making the final pass which sends a teammate through on goal.

So how will New Mexico look to shut down the combination of Shipp and Cicciarelli? Look for one of New Mexico's defensive midfielders (one of the players right in front of the defensive back 4) to play almost man-to-man against Shipp all game long, to try and not give him the space he needs to turn towards goal and make incisive passes. If the defensive midfielder is able to prevent Shipp from receiving the ball, and makes Shipp drop deeper into the midfield to receive passes, he has done his job. Removing the playmaker from the edge of the penalty area where he likes to work is THE key to stopping the combination the Irish enjoy playing. If Shipp is separated from Cicciarelli, Cicciarelli will be required to hold any ball he receives even longer, waiting for Shipp and his other teammates to join into the attack - extra seconds that can be used by New Mexico to setup a solid defense.

If we start to see Shipp playing more around the center circle than the penalty arc, it may be a long day for the Irish attack, and Cicciarelli may be rendered ineffective with no outlets after he receives the ball. If Shipp is able to gain some space in the midfield, I fully expect the attack to click and put some goals up on the Lobos. I think Coach Bobby Clark will utilize one of the wings early and often to try and soften up the Lobo defensive midfield, forcing them to sag towards the sideline, leaving Shipp free to roam the middle of the field.

Good luck to the Irish tonight, and hopefully everyone enjoys a little change in their regularly scheduled programming! Go Irish, Beat Lobos!

(Author's note: We're going to treat any soccer questions in the comments as a good place to learn about the beautiful game, should any of you hooligans have "simple" questions that you would like answered!)