In this edition of OFD films we take a look at how both Notre Dame and Stanford broke some of their offensive tendencies to put points on the board.

Every football team has tendencies. That's why coaches spend so much time scouting the opposition. If they can decipher the tendencies of the other team they gain an advantage on game day. In this session of OFD films, we'll take a look at a couple of examples of the Fighting Irish and the Stanford Cardinal breaking their offensive tendencies. 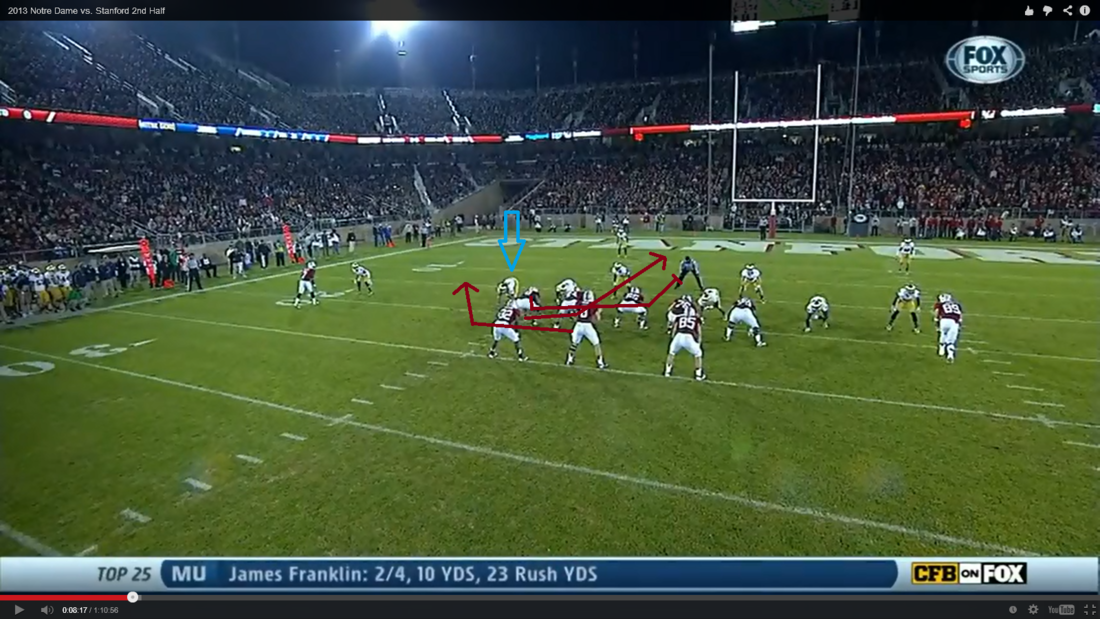 Third and about 9, a down and distance that favours the pass. Stanford tends to be a predictable team, they usually run in running situations and pass in passing situations. This time, they are going to break that trend and run the ball in a passing situation.

This is a tackle pull play. The offensive tackle will pull and lead block through the middle, leaving Ishaq Williams (# 11, blue arrow) unblocked. Quarterback Kevin Hogan (# 8) will read Williams. If he steps inside and attacks running back Anthony Wilkerson (# 32), the quarterback keeps the ball and runs to the outside. If Ishaq stays outside and plays the quarterback, Hogan will hand off to the running back up the middle. This play is a hybrid between power football concepts (pulling linemen leading running backs) and spread football concepts (such as the zone read). 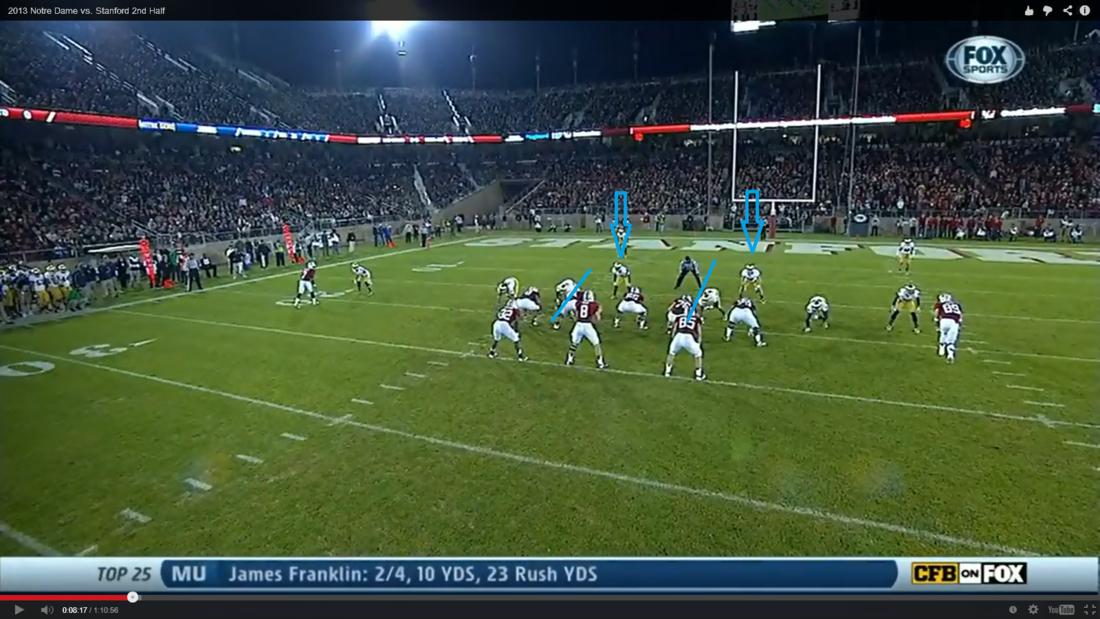 Notre Dame knows that Stanford tends to be a predictable team. It's a passing situation, so the Irish expect Stanford to pass. With the advantage of hindsight, we know the Irish are in trouble before the ball is snapped based on their personnel selection and alignment. Take a look at the players being used at inside linebacker (blue arrows). One is an undersized, former walk-on (Joe Schmidt # 38) and the other appears to be a freshman defensive back (more on the identity of this mystery defensive back turned linebacker later). The second concern is the wide alignment of the defensive tackles. If it is a run up the middle (which we know it is) this alignment gives the interior of the Stanford offensive line a virtual free run at a DB playing linebacker and Joe Schmidt. Yikes, not a great match up for the Irish. 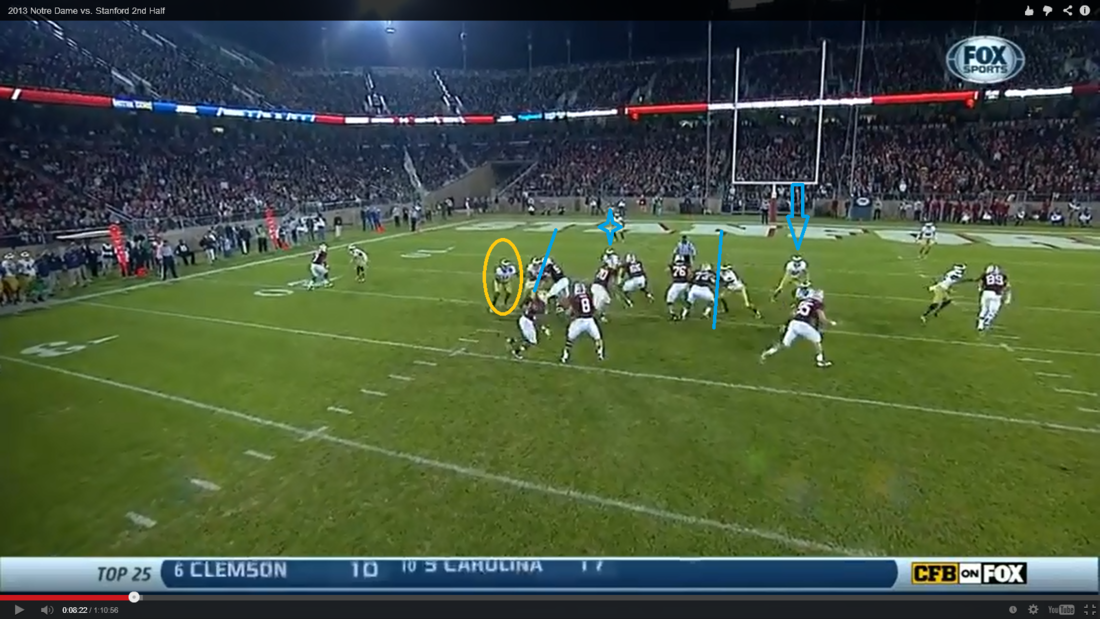 A fraction of a second after the snap. The quarterback is reading defensive end Ishaq Williams (yellow circle). Williams stays to the outside so Hogan will hand the ball off. As you can see, the alley between the defensive tackles has widened considerably and is now a chasm. Joe Schmidt (blue arrow) has been pulled out of the box pursuing his responsibility in man coverage. This leaves the mystery defensive back (blue star) all alone to take on two Stanford offensive linemen. Running the ball up the middle turned out to be a pretty good choice in this situation. 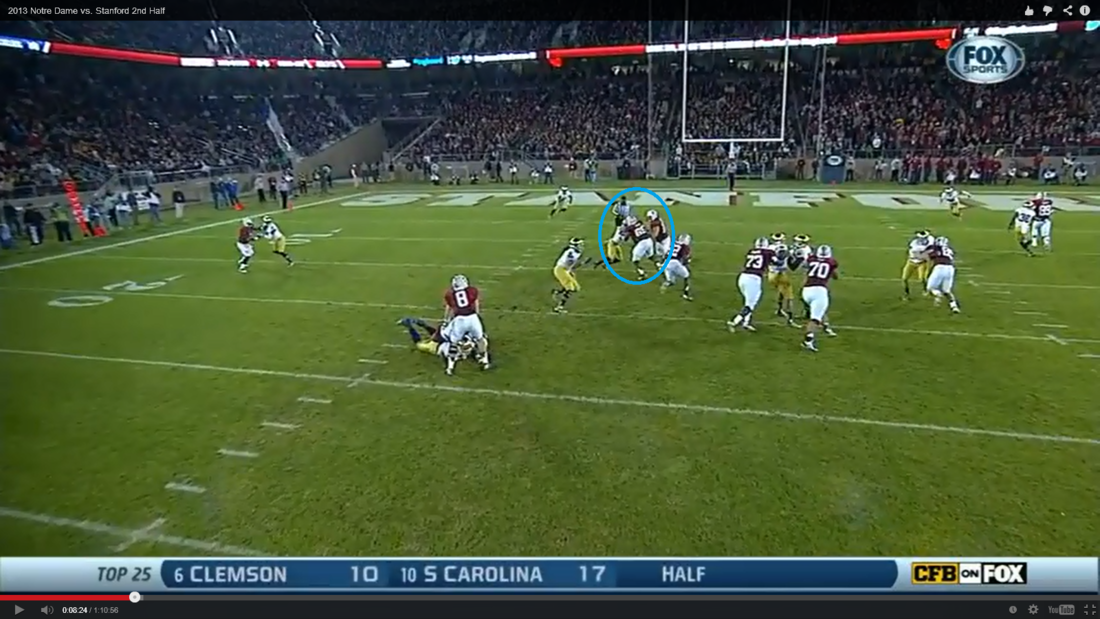 Our mystery defensive back is getting mauled. The only hope is one of the unblocked Irish safeties will be able to make a play and prevent a touchdown. I laughed a little and cried a little when I typed that sentence. 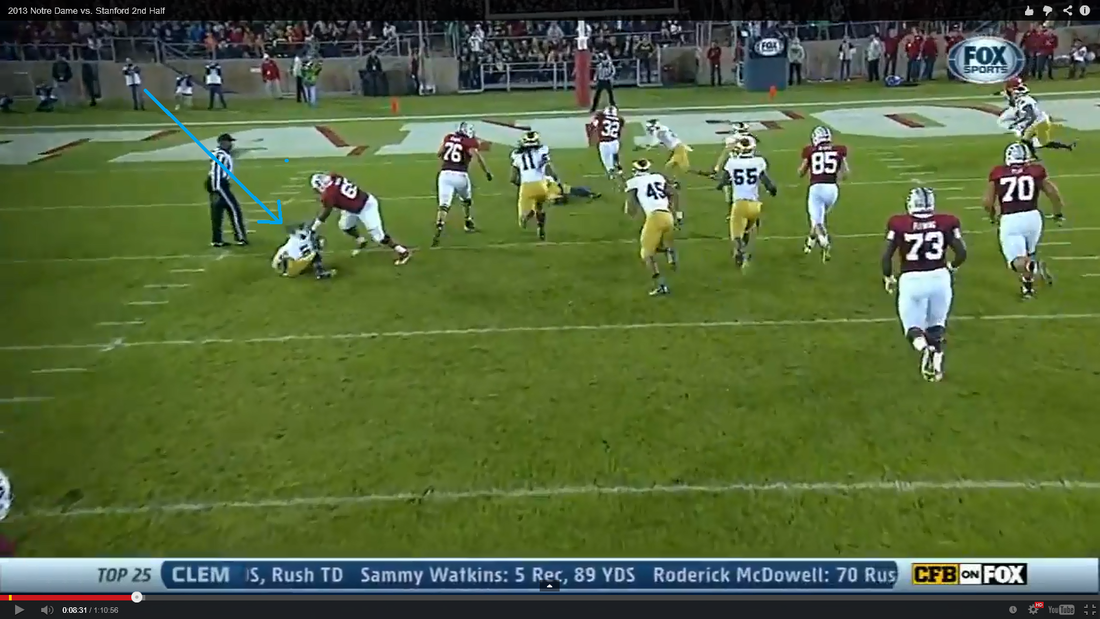 Behind the scenes there was much debate regarding who the mystery inside linebacker was. We were unable to get a clear look at a jersey number from any of the TV angles we have. The feeling of the staff was it was either Max Redfield (# 10) or Devin Butler (# 12). I personally think it's Redfield because the jersey number looks like a 10. As well, if you are going to line up a defensive back at linebacker you are more likely to use a safety because they tend to be bigger and are more accustomed to reading keys from the interior of the defense. What do you think OFD community? Does anyone out there know for certain who this mystery player is? If so feel free to let us know in the comments. If you don't know, feel free to speculate wildly in the comments.

Here's the video. Watch how the middle of the defense opens up almost instantly. As well, I present Mathias Farley's (# 41) technique on this play without comment. 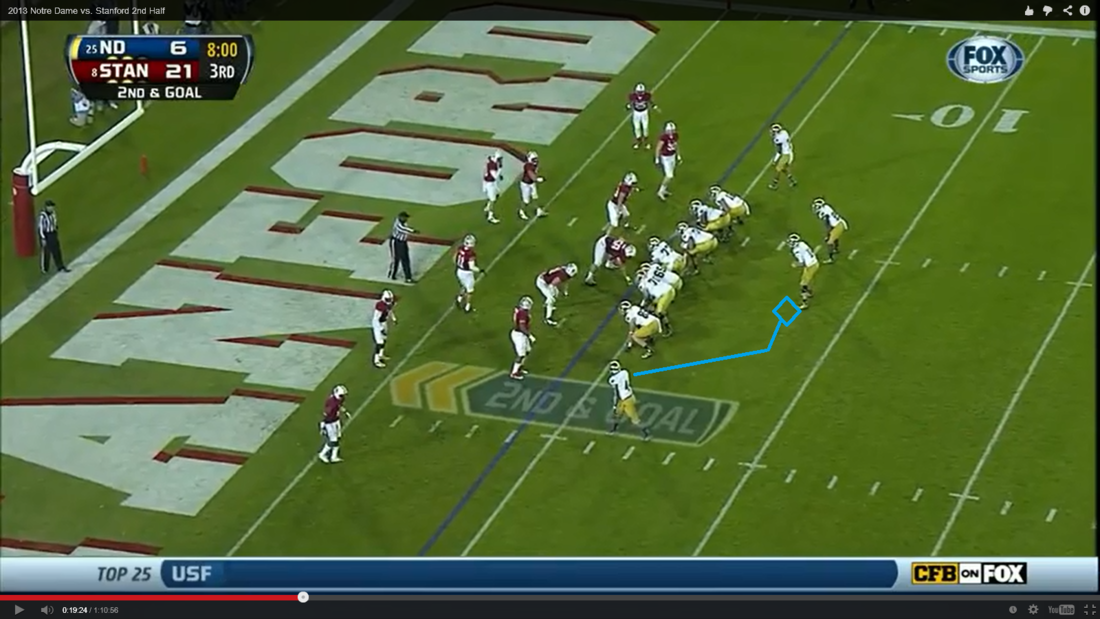 Not to be outdone, Notre Dame will break one of their tendencies to score a touchdown. The Irish will motion George Atkinson III into the backfield. This creates a two back set, which almost always means run. The run tendency is strengthened by the situation. 2nd down inside the 5 yard line is often a run play. 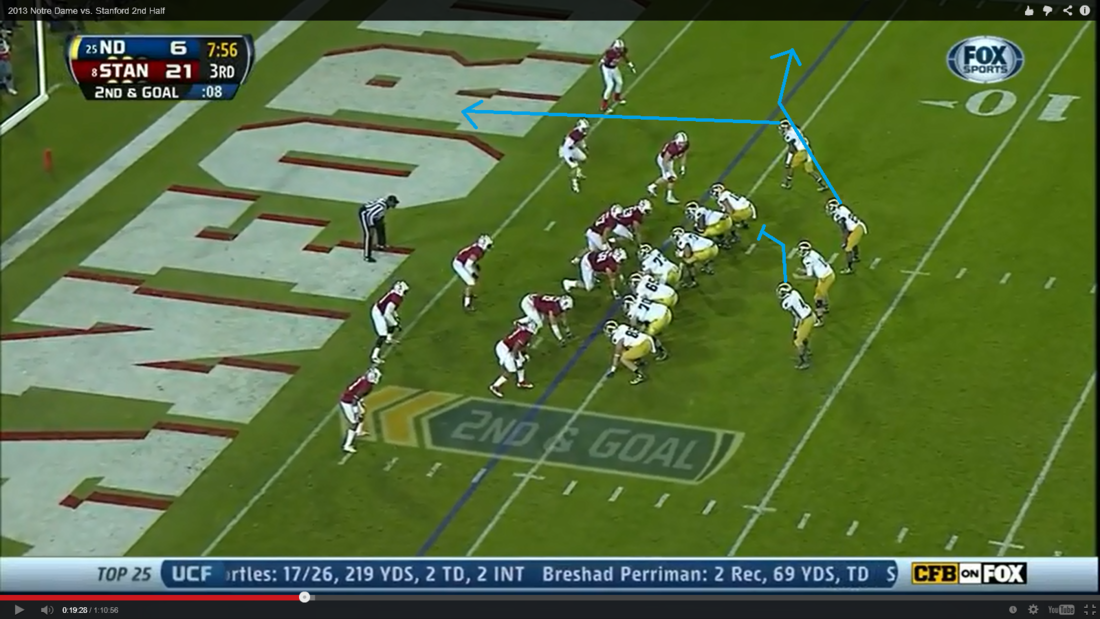 The Irish will run a pretty simple play action pass here. Tommy Rees (# 11) will look to TJ Jones (# 7) first and if he isn't open he'll check down to Tarean Folston (# 25). If everyone is covered Rees will run, throw the ball away, throw a pick in the end zone, spin the Tommy Rees roulette wheel of decision making. 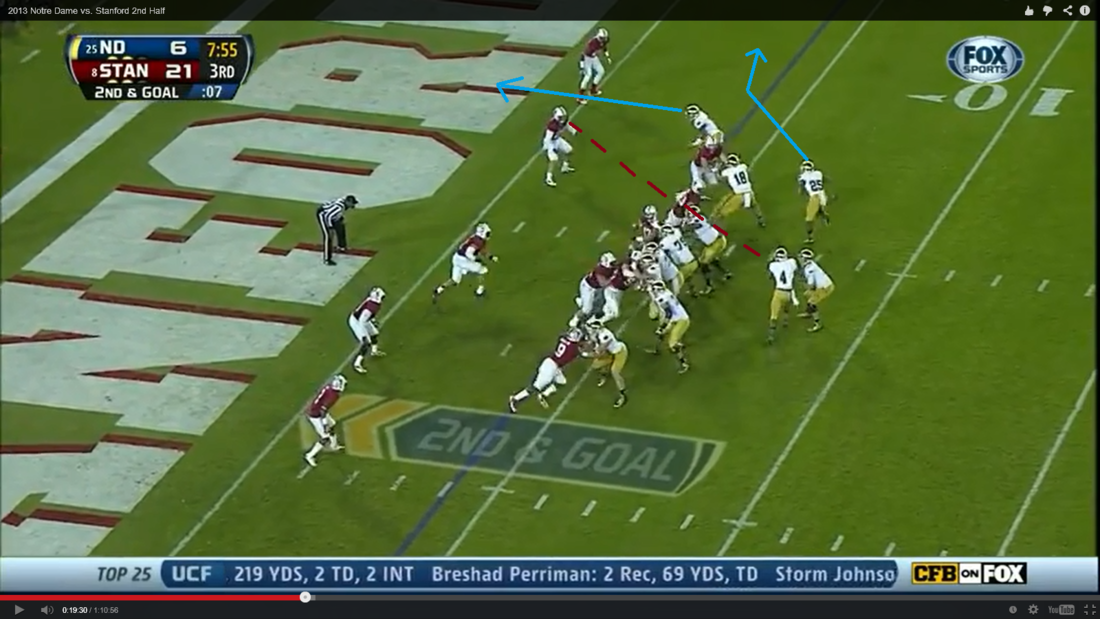 This is going to be a touchdown. Take a look at the Stanford defender responsible for covering TJ Jones. He's mesmerized by the play action fake. These days it's trendy for TV announcers to talk about eye discipline. That's really just football jargon designed to make a relatively simple concept sound complicated. Basically when you are in man coverage, you keep your eyes locked on your man. In this case, the Stanford defender "lost eye discipline" (boy do I feel smart and technical using that term) and peeked into the backfield. While he is sneaking a peek, TJ Jones runs by him.

There you have it. Stanford running the ball in a passing situation. Notre Dame passing in a running situation. Pure craziness. Next thing you know cats and dogs will be living together and Canadians will be writing about American football.