Welcome to another installment of OFD's Trick Shot Wednesday! What with all the griping about injuries and bellyaching about our embarrassingly subpar 7-2 record, it's good to inject some humor into our week so we can say something righteous and hopeful for a change and dispense with all them negative waves.

After we went to Colorado Springs and dominated the first half of our service academy slate, the fanbase was in fine form. Nothing was bad and everything was beautiful...but we asked you if Brian Kelly felt the same way. According to the commentariat (led by Queen Fishoutofwater), there were probably many things on Coach's mind, like, "Where's Shembo's bike seat?" or "Should I have listened to that commercial with the creepy German guy telling me to get a prostate exam?" But it was CleverScreenName who voiced the thought that was foremost in our beloved Coach's mind: 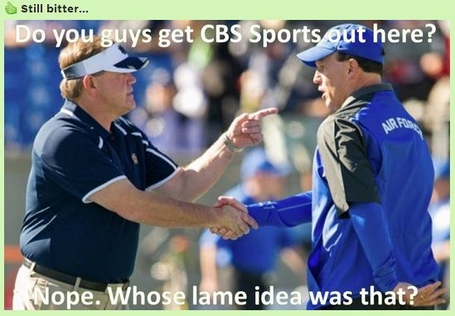 So now we know that CSN's screen name isn't the only clever thing about him! As a reward, you get to be King of the brand-new "OFD Cable Network That Will Never Not Carry a Notre Dame Game, Not Even The Ones Way The Heck Out In Colorado". Go forth and rule the airwaves, my son!

As we take the ice bags off our relentlessly-cut-blocked knees and turn our attention to Pitt, let's try to find a lighthearted moment from our nail-biting win over Navy (yes, folks, we DID win) this past week. Let's see...who do we have in this one? It looks like...wait a second. That's...that's not CAM again, is it?? Can't keep that dude out of TSW! 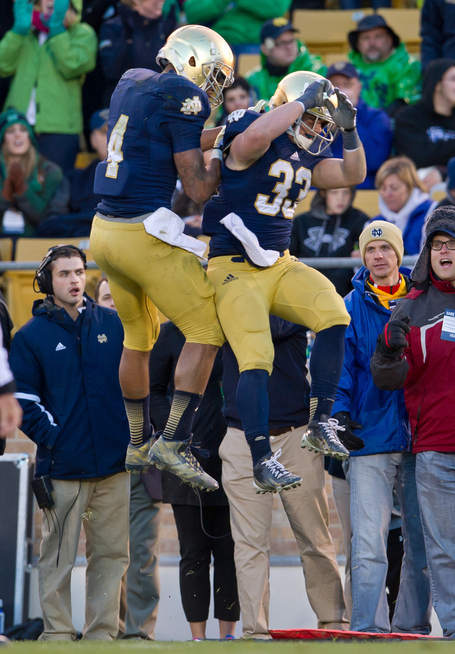 Yup, that's good ol' Run-CMC and GA3 celebrating after Cam's 4th-quarter touchdown rumble. Can any of you explain what sorcery is going on here or what the various characters are thinking? As always, give us your best captions in the comments and star whichever entries you think are worthy of one week of pseudo-monarchical power.