Who cares. We won.

The spread option offense isn't like other offenses. Most offenses have an overarching scheme and then call the plays within that scheme that give the offense the best chance at success in a given game. For example, consider Notre Dame's last two games. Air Force crowded the line of scrimmage and the Irish threw the ball down the field all game. Navy had absolutely no success stopping the run, so Notre Dame pounded the Midshipmen on the ground with a three-headed monster of George Atkinson, Cam McDaniel, and Tarean Folston.

This play is from Navy's opening drive. They're lined up in the flexbone and will run the veer. 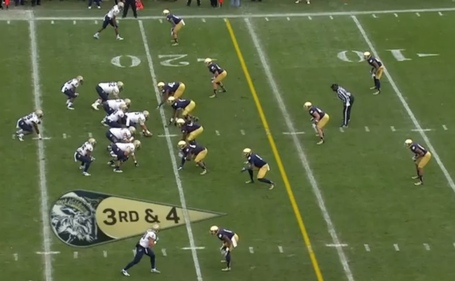 This play highlights the struggles Notre Dame had on defense. Let's start by identifying the count. 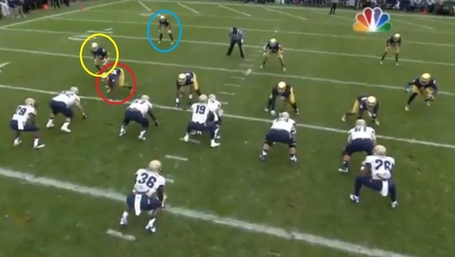 Romeo Okwara (red circle) is lined up as a 4-tech, so he's #1; he'll be optioned on the dive. Dan Fox (yellow circle) is #2; he's the pitch read. Mathias Farley (blue circle) is #3; he's the run support. Farley and Carlo Calabrese at middle linebacker are the responsibility of the playside A-back and the offensive tackle. 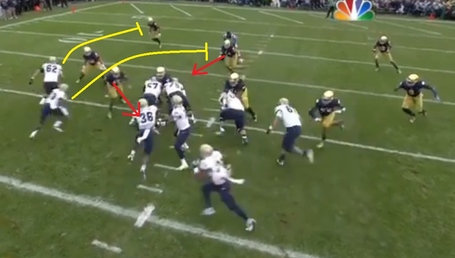 Navy double teams Isaac Rochelle at defensive tackle. Okwara comes down and forces Keenan Reynolds to pull the ball. The offensive tackle goes outside to block Farley, while the A-back slips behind Okwara to block Calabrese.

Maybe the biggest issue Notre Dame had in this game was the play of Carlo Calabrese. His responsibility was to diagnose plays and get to the edge to help on the option and he almost never did that. I honestly don't know if this is Diaco's fault or Calabrese's, but this should have been corrected during the game and it wasn't, and that's certainly Diaco's fault. Diaco does have a history of misusing his linebackers against the option. 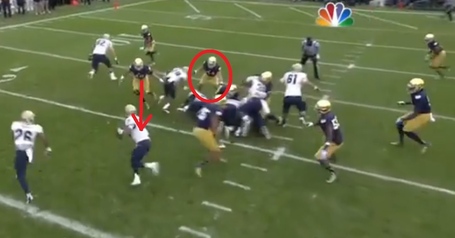 Here's what I'm talking about. What in the world is Carlo (circled) doing there? How is he helping the defense in that position? Okwara took away the dive so there's no reason for him to stay inside. He should be hauling it towards the sideline to help on the quarterback or the pitch. Instead, he makes for an easy target for the A-back. You can also see Farley is playing rather tentative. 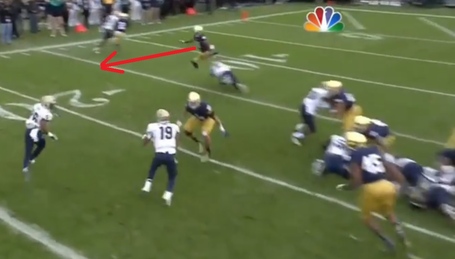 Farley actually does a nice job avoiding the block and saves the touchdown. But the damage was done and Navy picks up the first down easily.

This was the common theme on Saturday: the safeties playing tentative and Carlo Calabrese not in any kind of position to help the defense.

Diaco did make a few adjustments, but Navy had answers for all of them.

A few times, Notre Dame lined up in a 3-4 instead of the 4-3 they've been using since the 2010 Army game. When they did this, Navy would immediately check into a B-back dive right behind the guard. As long as the 0-tech and 4-tech didn't get penetration, there was natural bubble in front of the guard. 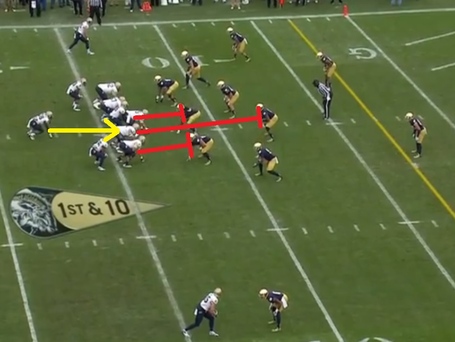 Watch the video and look at the space the B-back has to run.

Notre Dame caught on and started lining up in a 3-4, waiting for Navy to audible, and then shifting into a 4-3. They even got Navy to run the dive into the teeth of the defense once or twice.

Just like last week against Air Force, Diaco started using the corner to set the edge on the option plays. 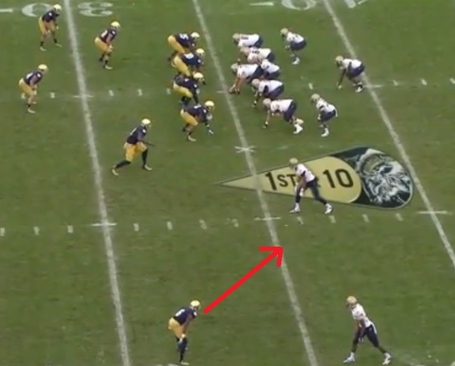 Here, KeiVarae Russell comes down to take the pitch. 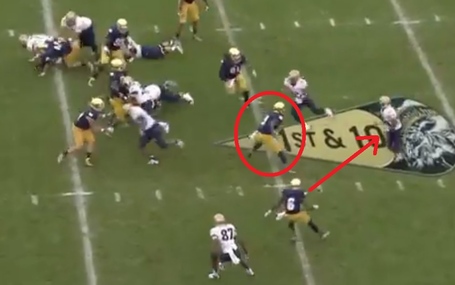 Unfortunately, Jaylon Smith tries to take both the QB and the pitch and Reynolds keeps the ball. But if Smith had played more aggressively and attacked the quarterback, Russell would have been in good position to make the tackle.

Navy responded in two ways. First, the wide receiver let the corner go by him and then settled in a spot about five yards down the field between the corner and safety. Reynolds then had an easy throw to the receiver. 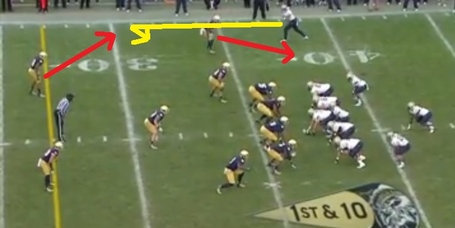 Devin Butler will play the edge here. Reynolds will throw a quick pass to the receiver before Eliar Hardy can come over to help in coverage. 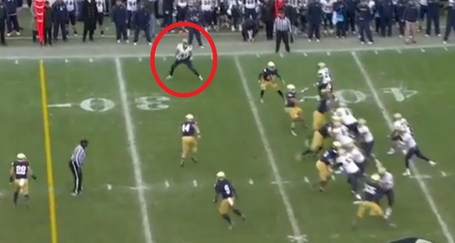 The second adjustment Navy made was to just take this scheme away with their formation. Navy brought the wide receivers in tight to the offensive line. This, in turn, forced Notre Dame to bring their corners closer to the line. The wide receiver and playside A-back could now switch blocking responsibilities. The receiver could block the middle linebacker while the A-back took the corner. 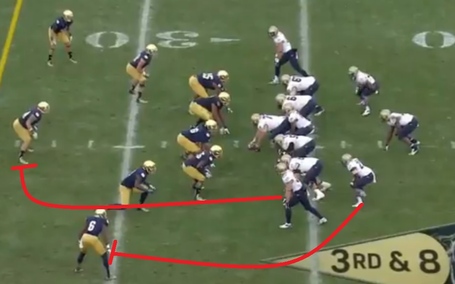 Look at how Navy continues to have enough blockers on the edge. Also watch at how Carlo Calabrese continues to fill the wrong lane on the veer.

Paul Johnson calls this an "easy stunt" because it's a very common adjustment teams make against the spread option. A smart quarterback will recognize this and change the count, making the linebacker #1 and the defensive end #2.

I think Diaco was counting on Reynolds continuing to read the end and handing the ball off into the waiting arms of Dan Fox or Jaylon Smith. That actually worked once or twice, but the unfortunate thing for the Irish is that this change doesn't do anything to change the numbers on the play. There isn't magically an extra defender on the edge.

Here's an example of where this went horribly wrong. 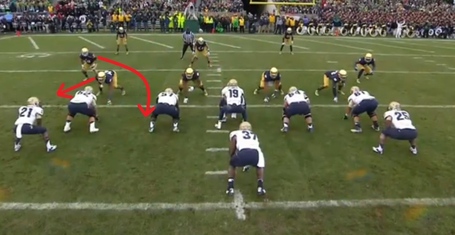 It's 1st and 10 near the endzone and Notre Dame is going to bust out the easy stunt. Romeo Okwara will widen to the outside while Dan Fox shoots through the gap.

Notre Dame actually fooled Reynolds, who hands the ball off. However, B-back are always taught to read their blocks and run where there is room. 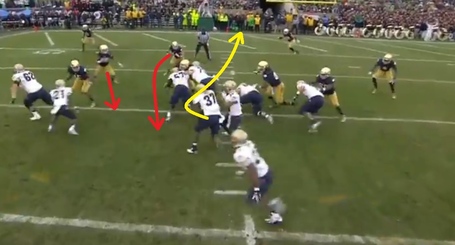 Chris Swain, the B-back, is supposed to run through the B gap, but a linebacker is flying towards him. So he cuts back and follows his guard and center through the A gap.

Once again, Carlo Calabrese is the culprit here. He overreacts to the dive and shoots into the B gap to help Fox. Once Swain clears the blocks by his linemen he has a free path to the endzone. Carlo needs to trust his teammates here and take away the cutback through the A gap.

There was one last set of adjustments, and it was almost very costly for Notre Dame.

In the first play of this post, I talked about how Mathias Farley was playing too tentative at the safety position. In the fourth quarter, Diaco finally changed that. He started using the safeties to shoot through the gaps on the veer. 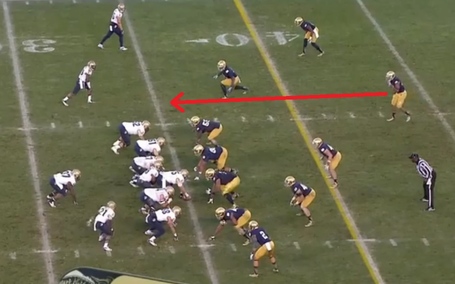 Navy is in a funky formation here. They moved their right tackle to the left side of the line and have a wide receiver lined up at right tackle. They also split one of the A-backs out as a receiver. It doesn't change any of the mechanics of the veer, though. Eliar Hardy will fire out towards the line of scrimmage. The A-back at receiver won't be able to block him and Hardy will make a big play. 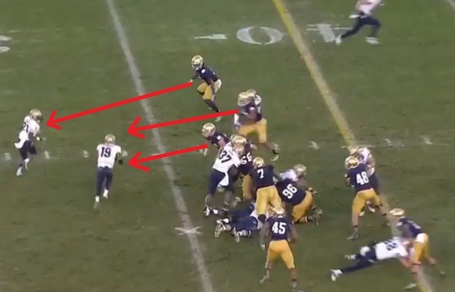 As an added bonus, Carlo Calabrese plays this perfectly and is in great position. Notre Dame now has three defenders on two Navy players. Calabrese and Hardy bury Reynolds for a three yard loss.

But just like everything else Notre Dame did, Navy had an answer. 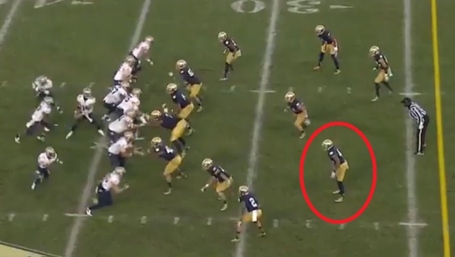 Look at how close Mathias Farley (circled) is to the line. Compare this to the other plays in this review. Navy runs a play action pass. 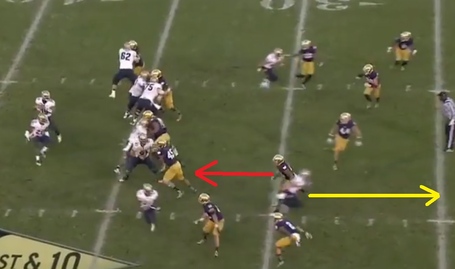 Farley gets sucked in on the play action and the Navy wide receiver runs right past him. All eleven Notre Dame defenders are shown in this picture. There is no one behind Farley. 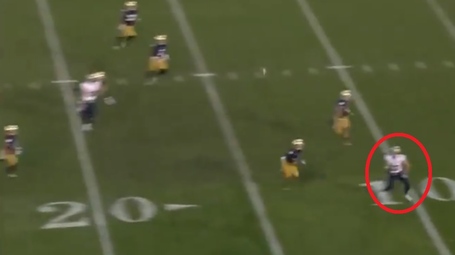 Bennett Jackson and Carlo Calabrese see what's happening and try desperately to catch up, but it's too late. Touchdown, Navy.

Ouch. That was quite the post-mortem. It sucks to play a game that close against Navy, but you have to tip your hat to the Midshipmen coaching staff. They had answers to everything Notre Dame did on defense and coached circles around Bob Diaco.

So what about Diaco? Despite the two wins, the Notre Dame defense can only be deemed a failure in the games against Air Force and Navy. The continued misuse of Carlo Calabrese at middle linebacker, the tentative play of the outside linebackers and safeties, and the inability of anyone to get off of blocks was terrible.

However, Notre Dame will not see the spread option offense again until next year. The defense has performed admirably this season and will probably continue to do so. Diaco showed he was able to learn from his mistakes the last time he got embarrassed by an academy, so let's hope he does so again. To turn on him now over games against the military academies is dumb and shortsighted.