A review of Notre Dame's thrilling victory over Navy.

This game had that feeling of all those painful losses from this century with glum weather, poor defense, and untimely turnovers. But, Notre Dame won! Yet there are still many questions to mull over after this 38-34 victory over the Midshipmen.

Play Call of the Game: 17-yard TD Pass from Rees to Koyack

It's nice to see Koyack finally playing to his potential. He only has 5 receptions on the season after Saturday but he's already doubled his yardage from last year and let's not forget he still has another year of eligibility. Certainly in recent weeks Koyack's been on fire with touchdowns in two straight games and scores in three out of the last four.

Wow, a pro-style play-action fake from under center with a waggle to the tight end in the flat?

Who put the gun to Kelly and Martin's head on that play?

By the way, the Irish also ran this play earlier except to Troy Niklas which gave us the amazing opportunity to view Hercules literally throwing a defender to the turf on his way to 10 more yards.

Navy played a near perfect game on offense but this one mistake was a back breaker on their final drive. They had just given the ball to their fullback for 5 yards on first down and moved to the Notre Dame 32-yard line. Seconds later Reynolds toss was a little off mark and Navy ended up losing 9 yards.

Reynolds did make a nice play on third down to escape pressure and get 10 more yards back but it set up that fateful fourth down play which failed and ended the game.

I'd also add Troy Niklas' clutch 28-yard catch on 3rd & 8 following a substitution infraction. That big first down allowed Notre Dame to continue a drive that ended up with Folston's game-winning touchdown.

You know your offense is humming when you only have 5 third down attempts for an entire football game. The funny thing is that Notre Dame only converted 2 of those 5 attempts but they were 1 for 1 on fourth down attempts.

What isn't a surprising stat was Navy's 16 attempts on third down. If that doesn't show how much they ground things out on offense nothing will.

Kona played his heart out before leaving the game with an injury and he still led the team with 11 tackles. In a game where the defensive line was very lackluster it was Schwenke at least doing something out there.

The score was 10-7 Notre Dame at this point and the Irish had already moved 52 yards down field and were about to enter Navy's red zone. Then Jones slips, Rees' pass is fired right into the chest of a Midshipman, and one series later Notre Dame found themselves down 4 instead of being up by 10.

Bad Flag of the Game 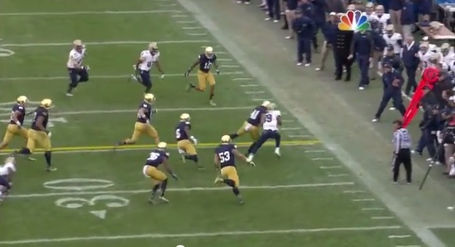 This play really summed up some of Notre Dame's tough luck on defense and the incompetency of the referees. Farley comes up and actually makes a play! He made a play and what's more it was a stop on third down!

The head official states states after the play, "Personal foul 53 on the defense. It's a 15-yard penalty it'll be an automatic first down. By rule, number 53..."

And then the ref stops talking as he realizes it wasn't 53 (Justin Utupo) who made the hit. Since it was a very late flag I think what the ref who threw the laundry was calling was Utupo's jawing after the play.

So that's the way it was officially scored but that doesn't explain how the head referee was convinced by another official that it was a targeting foul.

Just a deep, loud, and maniacal laugh. We were all like "Here we go again" after Rees' interception towards the end of the half but he rebounded well, managed the game in the second half, and finished the game going 5 for 6 with 91 yards and a touchdown.

Rees also had a pair of beautiful passes to Jones in this game---including the touchdown pass. The third down conversion to Niklas was of the most clutch variety.

The Irish scored three touchdowns in four opportunities and settled for a field goal from the Navy 8-yard line on the second series of the game.

Fun stat: Excluding the kneel down series to end the game Notre Dame gained at least 52 yards on 7 of their 8 offensive drives. The lone outlier was Rees' interception before the half on the first play of the series. In fact, the Irish gained 70+ yards on four of their 8 drives.

If there was ever a perfect game for an offensive line the Irish might have pulled it off this week. That's a great effort with two new starters in left guard Connor Hanratty and right guard Steve Elmer. Notre Dame had zero rushes for negative yards, Navy had zero tackles for loss, zero sacks, zero quarterback hurries and I'm pretty sure they didn't even breath on Tommy Rees.

The defensive line will get cut some slack because of injuries but their effort was quite poor. Lining up 2 yards off the ball, sometimes not even down in their stance, preparing for cut blocks, not even shedding those very well, and sometimes getting knocked off the ball the old fashion way.

Steve Elmer made his second straight start at right guard and Jaylon Smith continues to start at outside linebacker. Of course Tarean Folston had a career day with 140 yards on 18 carries and a touchdown.

Corey Robinson and Will Fuller played again at receiver but did not catch any passes. He's not a true freshman but it was notable that C.J. Prosise caught a 13-yard pass.

The main story to me for the Irish defense was their inability to get off the field on third down. Navy was able to convert 10 third down opportunities. To put that into perspective Michigan and Oklahoma combined for 11 third down conversions against Notre Dame this season.

A lot of that conversion rate was Navy's ability to get into manageable third downs. The Middies were just 3 for 8 converting third downs of 6 yards or longer but they converted every single 3rd & 5 and shorter. Even just a couple stops on third and short could have dramatically swung the game in Notre Dame's favor.

I'll try to sum up the defensive performance succinctly: Navy played nearly flawless and Keenan Reynolds worked the option wonderfully. The Irish defensive line played way too tentatively and the cut blocks got into their heads and the heads of the coaching staff. Middle linebackers consistently filled the wrong holes and corners couldn't get off blocks to help on the edge. The safeties played deep and couldn't fill alley's worth a damn. Does that about sum it up? Oh yeah, and the injuries.

Shumate, Farley, Jackson, Russell, Calabrese, Fox, Okwara, Nix, Tuitt, Smith, and Shembo are the likely starters this weekend against Pittsburgh. Doesn't seem that bad but if Nix can't go it's expected that Jarron Jones and Tyler Stockton will play at nose guard (yikes) and there's virtually no third-string along the defensive line and no backups at both outside linebacker positions who have seen any playing time. Next week will probably be ugly, let's hope the offense picks things up and puts enough points on the board.