Taking a look at the constraint plays that make Stanford's methodical offense effective.

Power, power, power. You'll see the play at least 15 times on Saturday from the Cardinal, but they can't run it every time, can they? In an offense that has a distinct identity like Stanford's (they're going to cram it down your throat), oftentimes, the plays that make the offense tick aren't the bread-and-butter plays like the power, or the counter. Many times, the plays that make the offense work smoothly are the constraint plays.

The constraint plays in Stanford's offense serve two purposes, as all constraint plays do: to punish the defense for overplaying the offensive tendencies, and to open up the bread-and-butter plays by providing something extra for the defense to account for. On the defensive side of the ball, a lot of time and effort goes into allowing the players to make a read and react quickly. If they need to also worry about a playaction pass or that runner in motion getting a handoff, they won't be able to react as quickly to the play developing. In Stanford's offense, they use the constraint plays to turn their core set of runs from 3 yard gainers to 5 yard gainers, by making the defense account for everything.

Since it's Thanksgiving and you should be spending time with your family and not on some Notre Dame football website (unless you're here to get away from your mother-in-law, in which case, welcome, stay awhile, we have over 3 years of articles to peruse), we're going to make this a quick look at 4 constraint plays that Stanford will likely use in Saturday's game against the Irish. 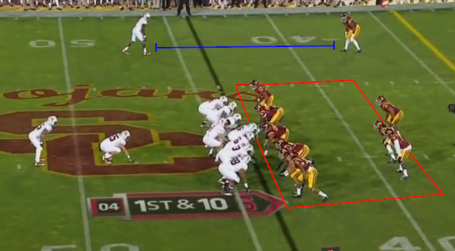 Here we see a very common look from the Cardinal. They've had some success on this drive, moving the ball well on the ground. The defense has responded by loading the box with NINE men. The cornerback to the top of the screen has given Ty Montgomery an 8 yard cushion. Kevin Hogan sees the matchup in the box, and the cushion to the outside, and simply throws a smoke route to let Montgomery pick up some easy yards instead of the run called.

Here we will see a very standard play that many power and pro-style offenses run, the waggle. The main goal of the play is to get the linebackers to act on the run action given by the pulling guard and the running back. I believe it was Abraham Lincoln who said "If you want them to bite on the playaction, you better pull a guard." The TE on the end of the line will hold his block momentarily, and then release to the flat, where he will usually have some room to operate. This play looks to punish the defense that sends its linebackers crashing against the power run game of Stanford (something I think we may see from Notre Dame this weekend).

This is one of the cooler plays I've seen in a while, and something I think Notre Dame could work into their playbook as well. We have all seen the orbit motion used as a constraint play, where a wide receiver will come in motion looking for an end around as the running back is either getting or faking a handoff up the middle. Stanford works another wrinkle into the play to get Ty Montgomery out into space by faking the orbit motion, and having Montgomery double back for a swing pass. It is a great example of using the motion and the run fake to get the defense flowing in one direction and then effectively changing the point of attack. 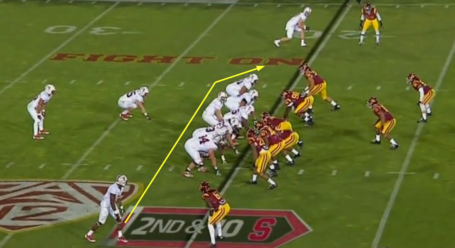 We've all seen the jet sweep from the spread offenses around the country. It's a great way to get the ball to the edge quickly. Stanford using the jet sweep from the power formations it uses is a nice wrinkle and a way to punish teams that load up the inside and risk losing contain. One of the goals of this play is to get Ty Montgomery in space (are we seeing a pattern yet?). In the video, you will notice that the linebackers from USC react to the motion before the snap. That is exactly what you want to have happen when you are running your constraint plays. If you see them react and stop the constraint play, that means the next time you use that motion, your base play will work even better.

There you have it -- now get back to that turkey! Happy Thanksgiving, Go Irish, Beat Cardinal!