"That DOES it. Johnson! Make me a budget that includes heated bleacher seats to go with Jumbotrons and FieldTurf!" --Jack Swarbrick

Y'know, when people say someone has "stone hands", they're usually insulting that person's receiving abilities. But if you were at the BYU game, odds are that anyone uttering the phrase "I have stone hands" was referring to their own numb and semi-frostbitten hands, not their ability to catch an oblong leather ball. On a completely unrelated note, sure feels good to be able to feel and move my fingers again!

As the temperatures plummet and the heating bills rise, I'd like to give you all a very warm welcome to yet another edition of Trick Shot Wednesday! I know the previous two weeks weren't easy for anyone here--not only did we suffer a rather unexpected setback against Pitt, but then we had to simmer through another bye week (which also included an unexpected season-ending surgery to fan favorite Louis Nix III) and weather all the negativity that came with these events.

Past editions of TSW: The Bard, the Duck, and the Tree Hey! Who turned out the lights? Moonwalking over cut-blocks Let's not point fingers Origin of Ridiculously Photogenic Cam McDaniel Punterrific job Shamrock Series shenanigans HORRIFIED CHEERLEADER Fun with Pez Reverend A. Carlisle

Despite all this, I'm very proud of how all you Deluded Manics™ conducted yourselves during this time. Sure, there was the usual (and semi-merited) lamenting and wailing and grinding of teeth, but overall we held our heads high and didn't "give up the ship", so to speak. Nowhere was this more evident than last week's Oregon-Stanford Edition of TSW, when y'all shook off the doom-and-gloom and made good use of the chance to poke a bit of fun at some West Coast powerhouses. Obviously, there was the usual array of photoshops, fashion critique, and jabs at USC's Inflategate scandal...but all that was swept aside when windyirish went all medieval on us and busted out one of the most gloriously poetic comments I've ever seen on OFD: a full-on Shakespearean interpretation of the tragedy unfolding before our very eyes. 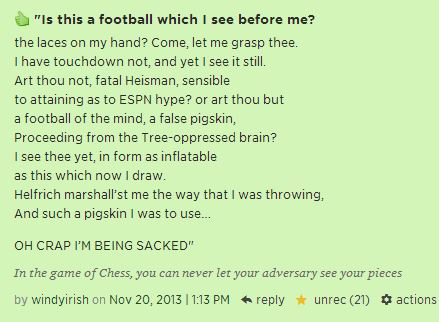 Let me tell you guys, I was so impressed by this that I honestly spent a solid 10 minutes searching for a GIF of Shakespeare applauding...but I fear I have disappointed you all. Instead, I humbly submit a GIF of an applauding actor who played a guy who traveled back in time and hung out with Shakespeare (which is basically the same thing...right?):

By the power invested in me by...me, I hereby appoint windyirish as Bard and Warrior-Poet of the Commentariat. Frankly, although subsequent weeks will bring new enlightened despots from among our ranks, this title may be a rank that is only bequeathed to superlative poetic entries, like this week's winner. Very well done, O Bard!

Well, although I already discussed the Arctic conditions in which the BYU game was played, I neglected to remind everyone that this was ND's last home game for this season. Such an occasion brings with it all the emotions of Senior Day, particularly regarding a certain senior quarterback. This means that Tommy Rees was greeted with loud cheers during his introduction as well as chants of "TOM-MY! TOM-MY!" from the student section...but the cold and snowy weather that accompanied it also meant that there were plenty of goofy-looking winter hats on the sideline.

Now, if anyone here has ever doubted Tommy's unflappable nature, please take a gander at this week's TSW photo. Then tell me honestly whether you could have kept a straight face if BK was inches from your face being all serious and coach-ly and such, but his comical knit hat kept flopping about and ended up at a jaunty angle. C'mon, seriously--just look at this: 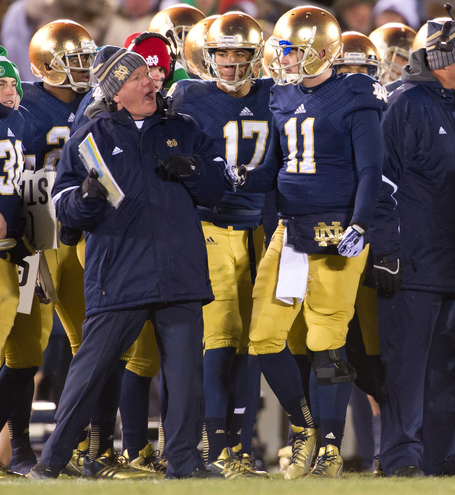 Please note Tommy's stone-cold poker face on the right...then next to him, observe how poor Mr. Onwualu appears to be on the brink of letting out a massive guffaw straight into the head coach's eardrum.

We only have one game left in the regular season, everyone, so stay sharp! Like the team, we need to be bringing our A-game in the comments this week; if possible, try to turn in as many captions for the above photo as you can before the Turkey Coma knocks you out cold. Click the gold stars, and we'll see you in the comments--Go Irish, Beat Cardinal!