OFD Films: The Evolution of the Irish Run Game

Share All sharing options for: OFD Films: The Evolution of the Irish Run Game

For much of the 2013 season the Fighting Irish run game has been an enigma. At times dominant, and at other times non-existent. In this film session we'll look at one of the subtle adjustments the Irish have made in the run game that is starting to yield promising results. 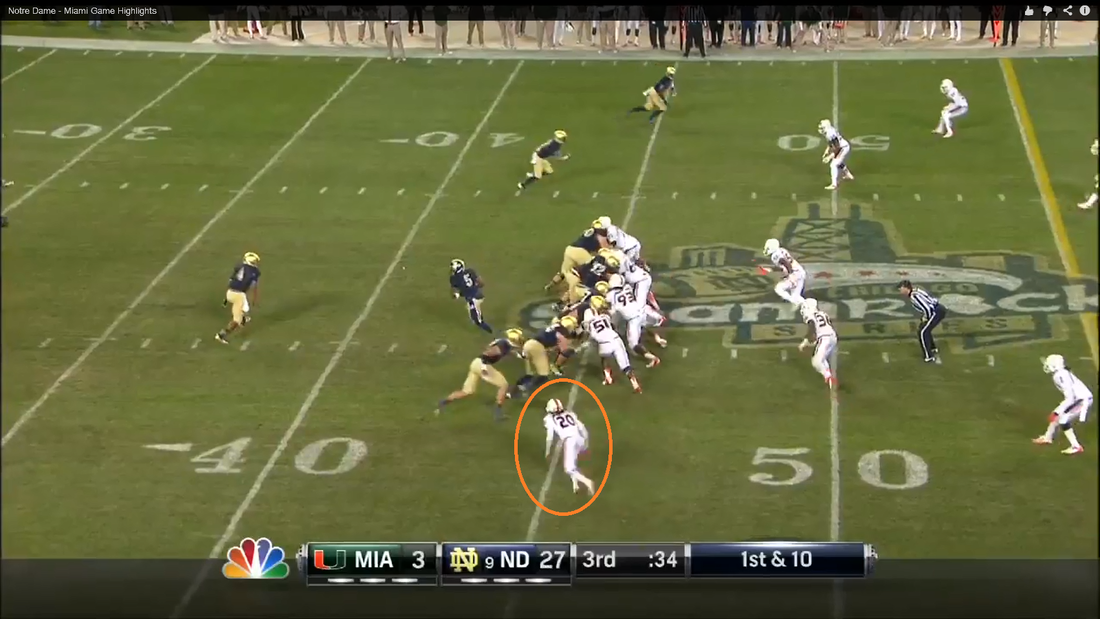 Notre Dame vs. Miami 2012. The good old days. Miami has a player that will come free off the edge (orange circle). Running back George Atkinson III (# 4) is going to get the ball. An unblocked defender coming off the edge on a run play, should be a tackle for a loss, right? 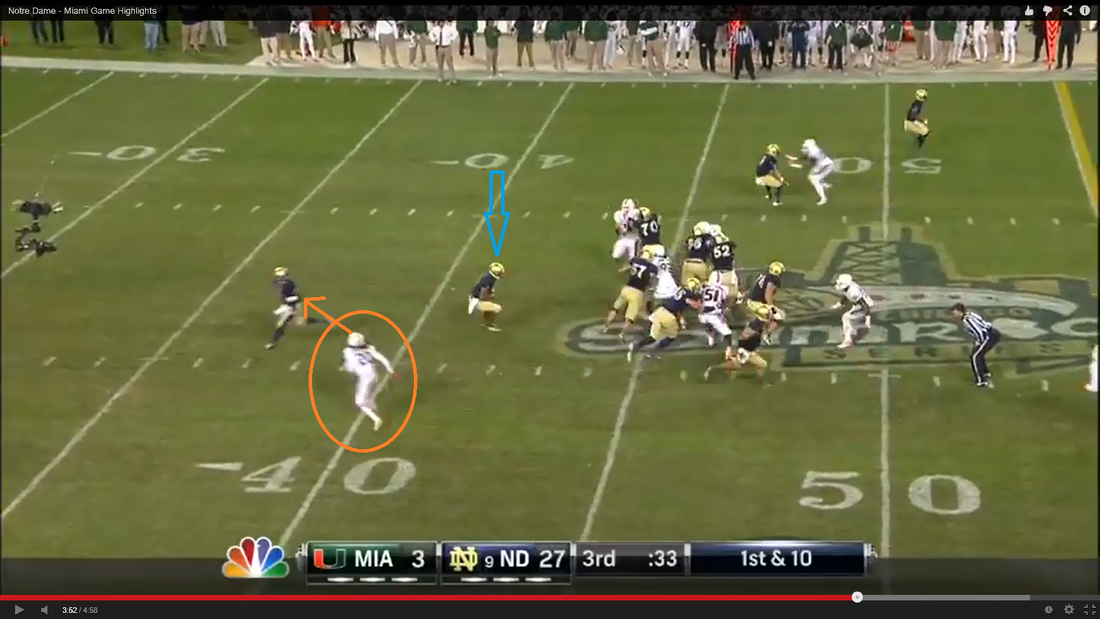 Not exactly. The free defender is pre-occupied with quarterback Everett Golson (# 5) (FYI it felt really good to type: quarterback Everett Golson) and doesn't notice that George Atkinson III has the ball. This illustrates one of the advantages of having a mobile quarterback. In essence, the threat of quarterback run serves as an extra blocker. The defense has to commit a player to the quarterback, which creates space for the running back. Take a look at the video and you'll see what I mean. 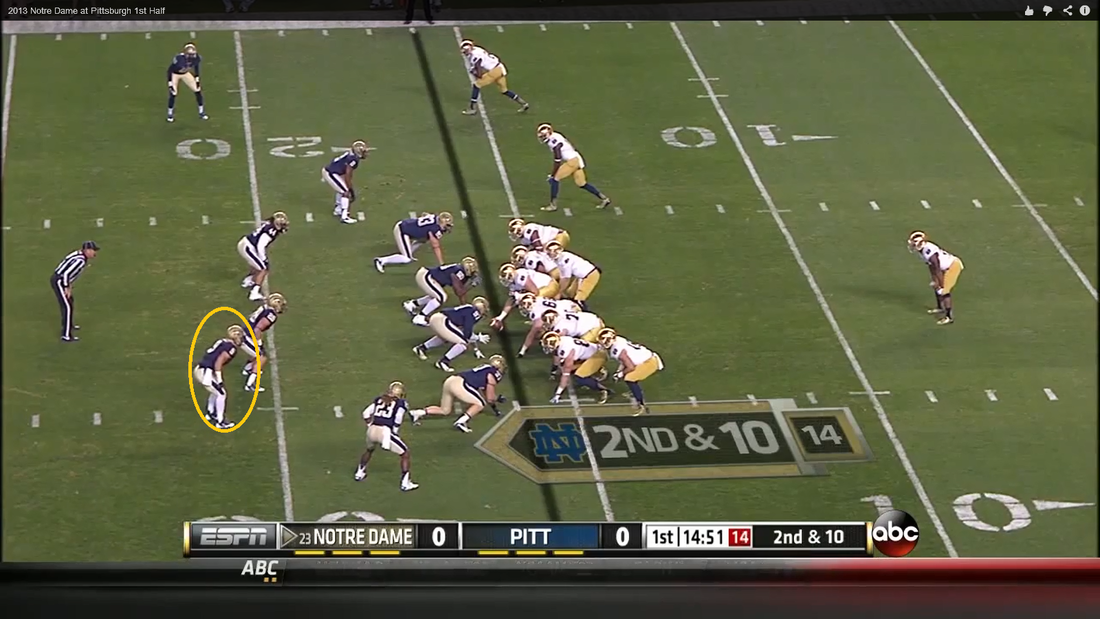 Unfortunately, we don't have a mobile quarterback this year. Consequently, when the opposition brings an extra player into the box it creates problems. Since there is no threat of quarterback run, the extra defender can focus exclusively on the running back. In this case Pitt brings a safety into the box (yellow circle) to help with the run. 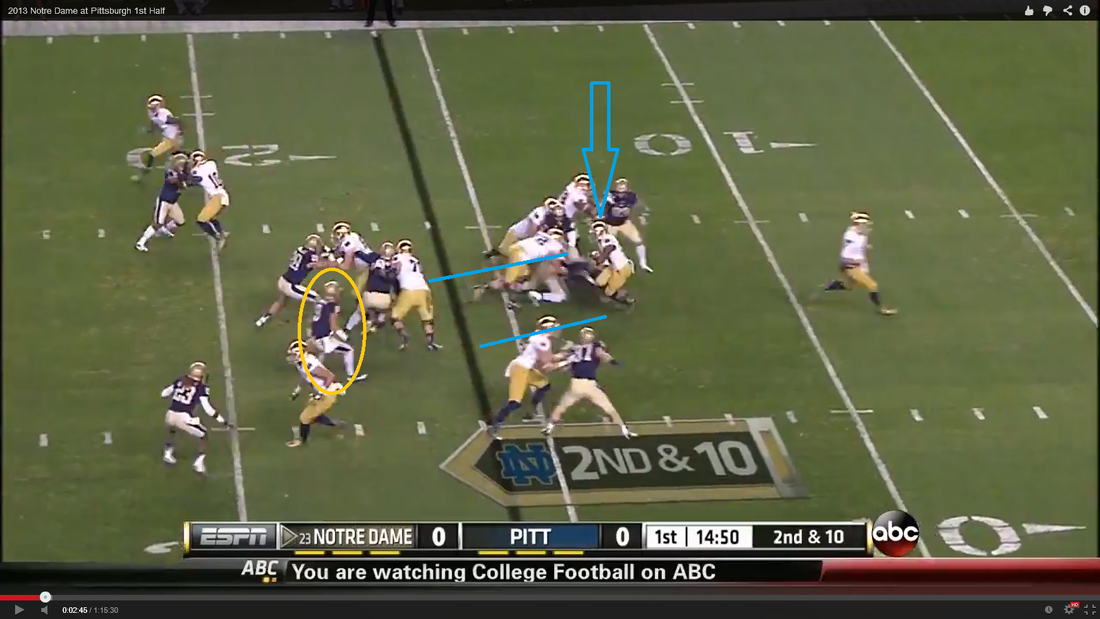 Tarean Folston (# 25) has the ball (blue arrow) and has a bit of lane to run through. The only problem is the Pitt safety (yellow circle) is not the least bit concerned about Tommy Rees and therefore can concentrate all of his efforts on Folston. 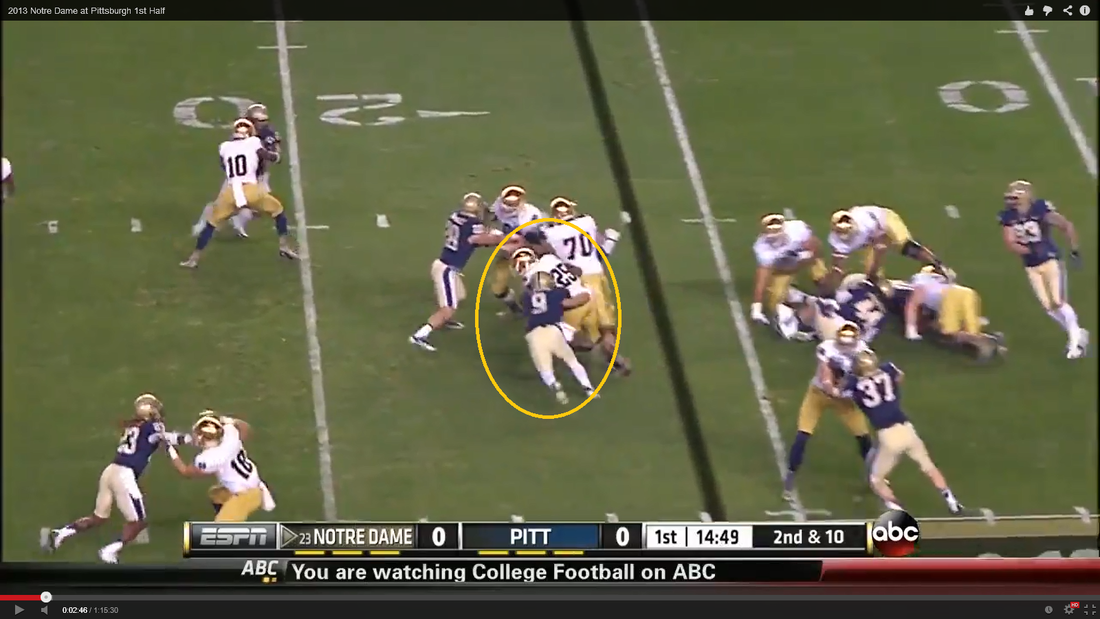 The unblocked extra defender makes the tackle. This has been an ongoing issue this season. The opposition doesn't have to account for the quaterback in the run game, so they have an extra player to stop the running back.

Unless a Notre Dame grad invents jet propulsion shoes, Tommy Rees isn't going to scare anyone with his running. As a result, the defense will continue to have an advantage in the run game when they bring an extra defender close to the line of scrimmage. The answer? Use a lead blocker. In a zone running scheme there typically isn't a lead blocker, rather the running back is responsible for influencing defensive players towards the line of scrimmage (click here for an article showing this). By incorporating a lead blocker the offense regains a numeric advantage at the point of attack. This is something Notre Dame has done sporadically throughout the year, however since the Air Force game we have seen it more frequently. Let's take a look at the film and I'll show you what I mean. 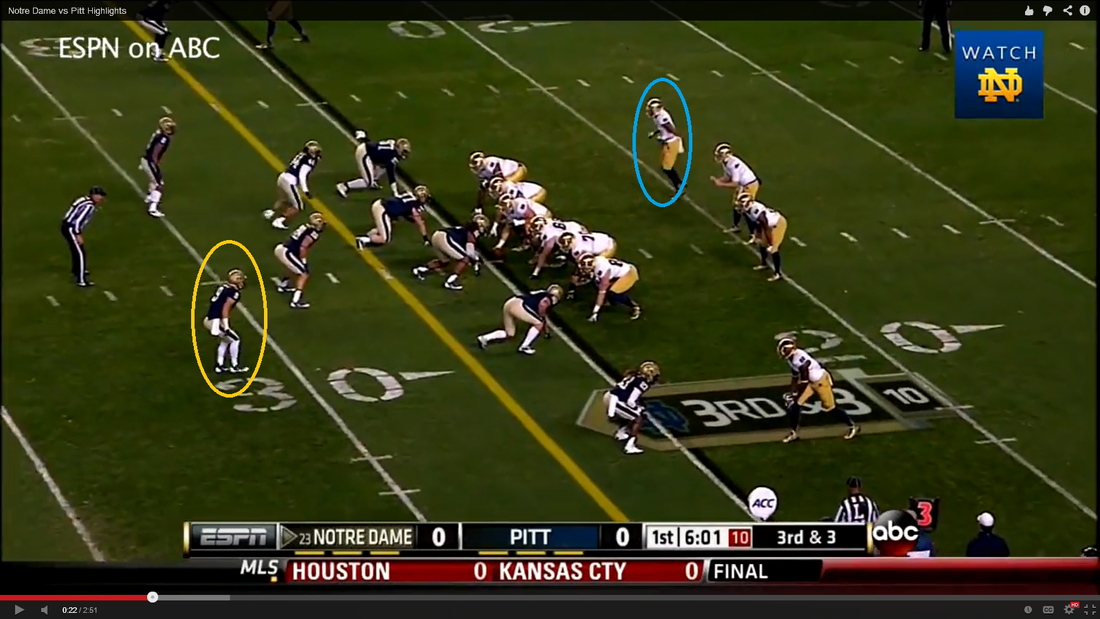 Pitt has brought their safety into the box again and he is looking to play the run. Notre Dame counters by motioning TJ Jones (#7 blue circle) into the backfield. This gives the Irish a two back set. Which allows the offense to use one of the backs as blocker at the point of attack. 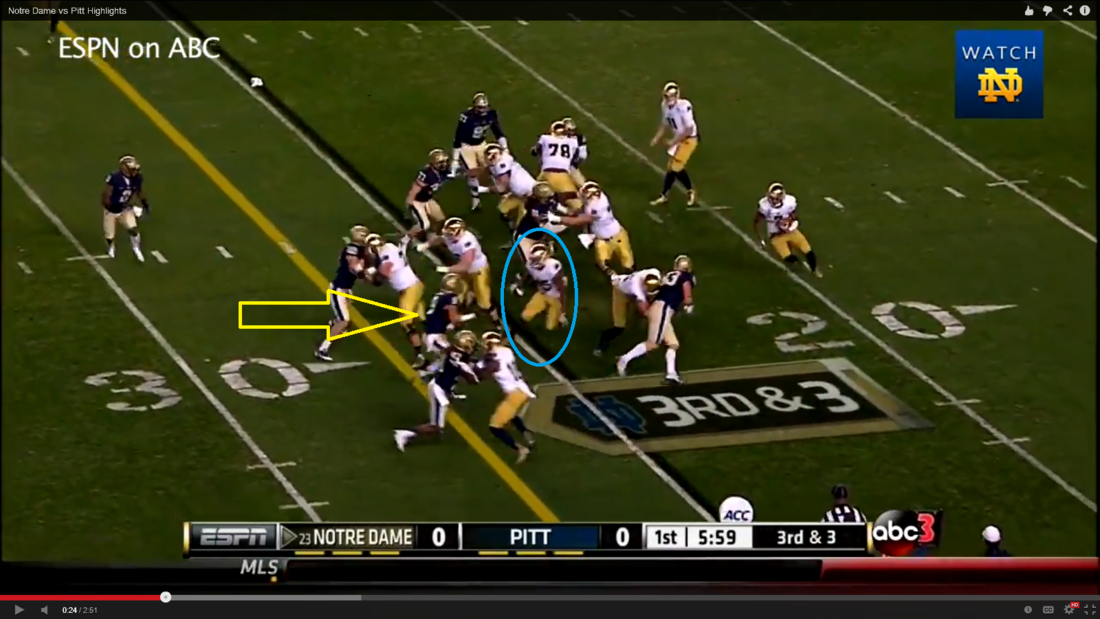 Tarean Folston (blue circle) is the lead blocker and is about to take on the extra defender (yellow arrow). 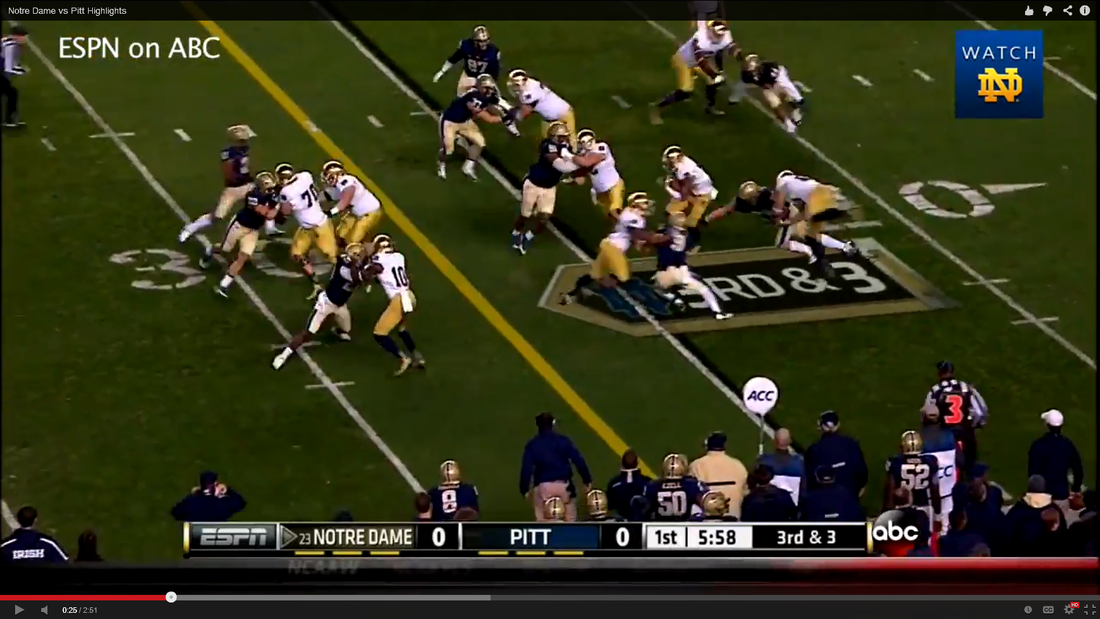 Every defender is accounted for and TJ is off to the races. 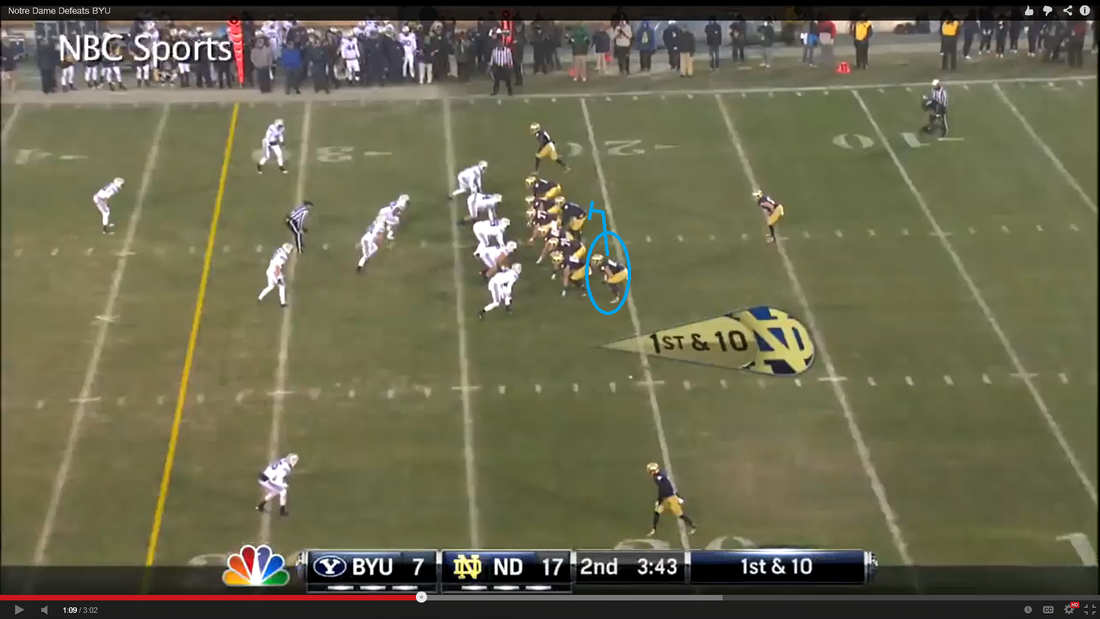 We've seen this double tight end look many times this year. Ben Koyack (# 18) is going to motion towards the point of attack. An extra blocker is necessary because BYU has committed 8 players to stopping the run. 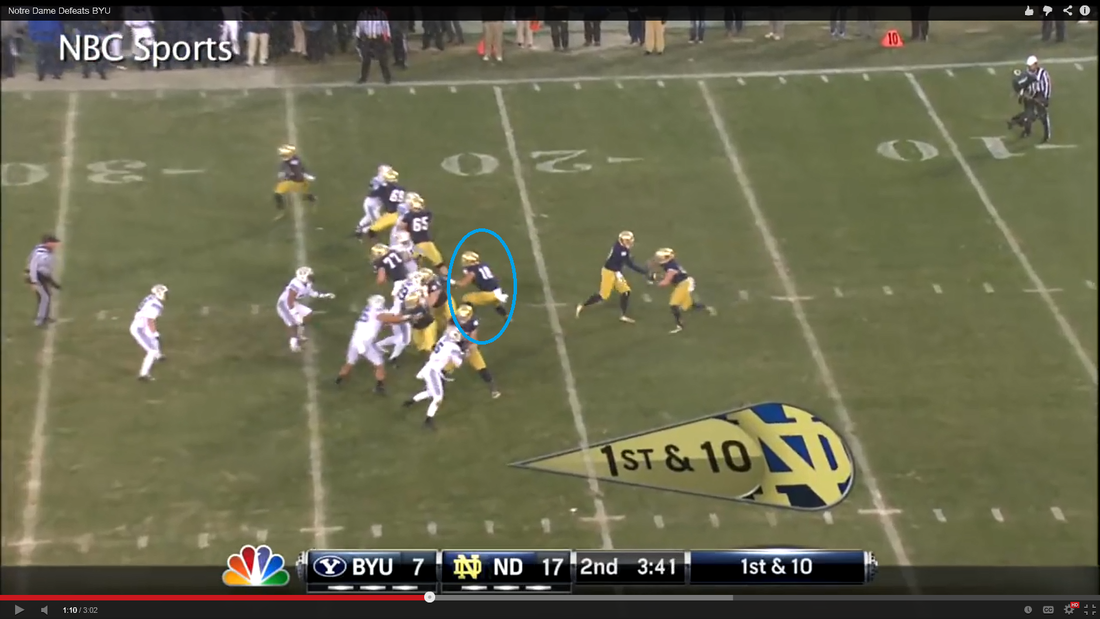 Post-snap. Koyack (blue circle) is directly at the point of attack. 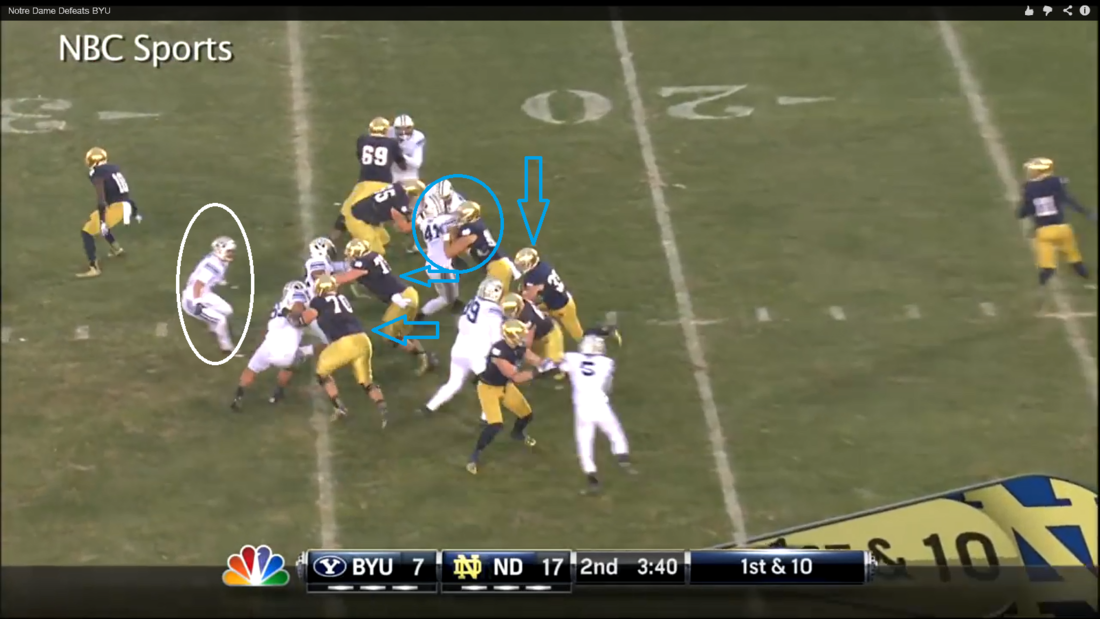 Cam McDaniel (# 33, vertical blue arrow)is at the line of scrimmage and is about to tuck in behind the blocks of Zack Martin (# 70) and Matt Hegarty (#77). As you can see Koyack's block (blue circle) is essential. Even with an extra blocker, BYU still has one defender that isn't accounted for (white circle). 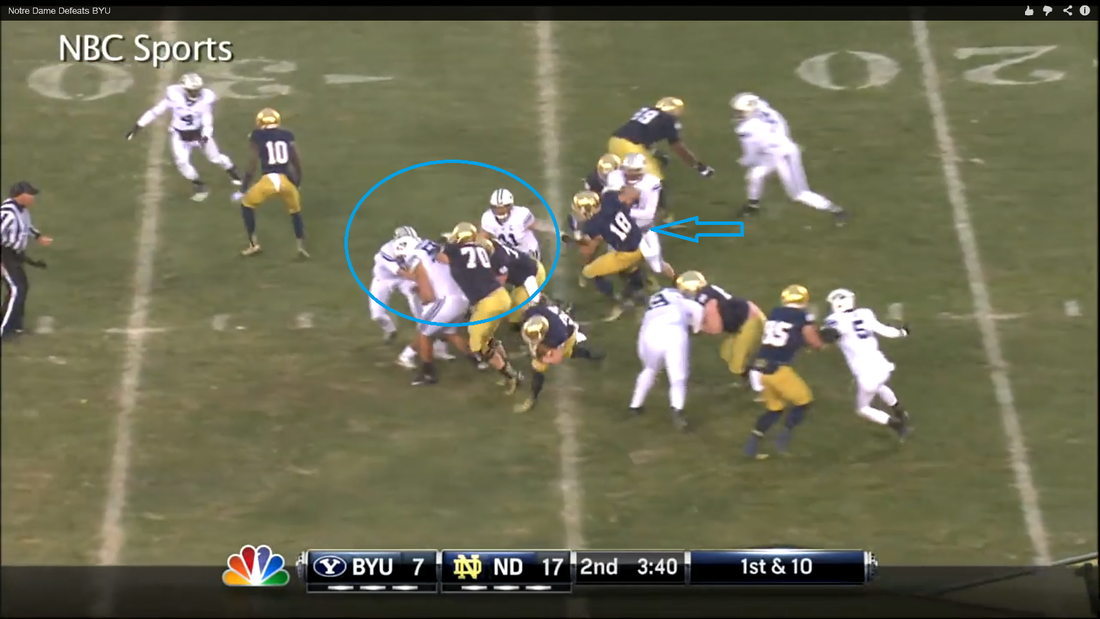 Koyack held his block just long enough. Cam did a nice job of waiting until the last second to make the cut and Zack Martin is doing his usual bulldozer impersonation and blocking two players.

There is little question that bringing an extra blocker to the point of attack was crucial to the success of this play. Otherwise, BYU ends up with two unblocked players waiting to make the tackle and the play goes nowhere.

Since the second half of the Air Force game we've seen an increase in run plays that use a lead blocker. Guards, running backs, tight ends and even receivers have all been used in a lead blocking role. This makes sense. While the Irish shouldn't abandon their zone blocking scheme, the reality is they are limited by a lack of mobility at the quarterback position. Since defenses don't have to worry about Tommy Rees running, they can easily gain a numeric advantage in the run game. By using plays that incorporate a lead blocker Notre Dame is able to even out the numbers in the run game. This adjustment has paid dividends for the Irish running game recently. Now all the coaching staff has to do is figure out a way to run the ball against Stanford. Might be time to bring in a few fullbacks. Anyone have a year of eligibility left?