Here with your weekly punting and kicking fix.

Notre Dame faces a tough BYU team this weekend that has some significant weapons on special teams. Let's take a look at what ND will see this weekend.

Justin Sorensen is BYU's primary kickoff man. For as large of a kicker as Sorensen is (6'1'', 243 lbs.), he has only ripped 67 kickoffs for 4,287 yards and 34 touchbacks. That's almost a 50% chance of a return. BYU has allowed returns on 32 of those kicks for 759 yards, an average of 23.7, and one touchdown, a 95-yard return by Demarcus Ayers from Houston. The 23.7 yard return is not terrible but it should be noted that some of these kicks that were returned landed in positions where the returning team would be stuck inside the 25. Looking at BYU's last game vs. a FBS opponent, Wisconsin, Sorensen had three kickoffs, one of which went for a touchback. His first landed at the 6 and was returned 18 yards to the 24. His second landed on the 4 and was returned 27 yards to the 31. The chances are going to be there on Saturday for ND to return kicks so long as blocks can be made. Let's take a look at the return by Ayers from Houston. 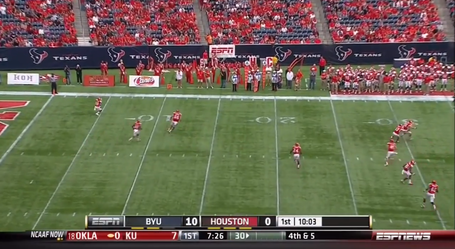 As I noted above with the short kicks, Sorensen only got this kick to the 5 yard line and Ayers has a lot of field to work with. There are no BYU players even on the screen, not even at the 30. Houston is wisely sitting back and you can see 8 of their players waiting to block. 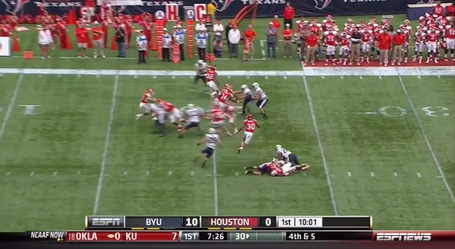 Absolutely fantastic job here by Houston to pick up assignments. There are a handful of BYU players running free but Ayers has a lane to the outside of the field because two BYU players have flooded the same zone (at the 22-yard line). Houston has 2 blockers for these guys and provided that Ayers can squeak by the free BYU coverage man at the 19, he has the entire sidelines to work with. 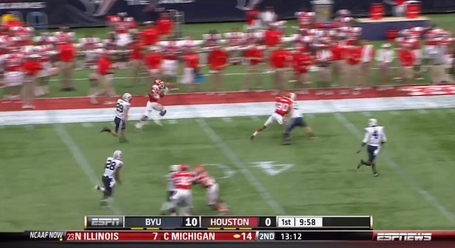 Ayers hit the hole and was off down the sidelines. He got an excellent lead block from #30 but BYU did a great job of recovering, with #s 28, 29, and 4 all taking recovery angles to prevent a longer return. 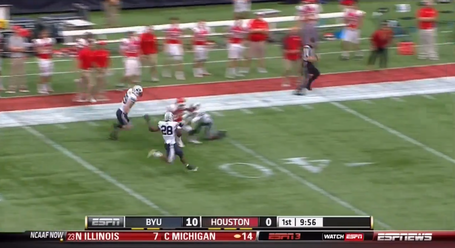 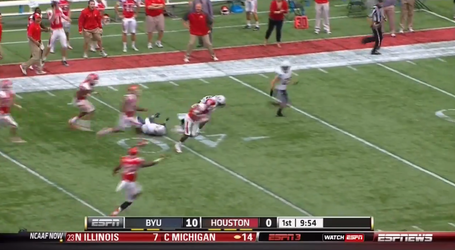 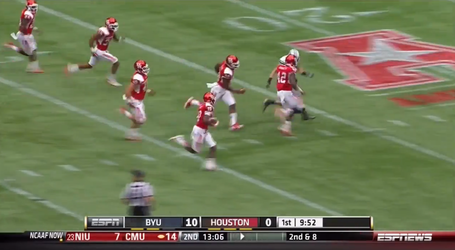 BYU was in position to stop Ayers but all three coverage men over-pursued. Ayers cut it back and now has the entire field with which to continue the return. He slowed down just enough to get blockers ahead of him and it was clear sailing to the endzone. Overall, a fantastic return by Houston. They took advantage of BYU losing their lanes, practically every Houston blocker kept their assignments, and Ayers was smart enough to wait for blockers after breaking the overpursuing coverage men at the 40. This is how you return kicks. Hopefully ND can take similar steps on Saturday and get a big special teams play because the chances are there.

Scott Arellano is BYU's punter and is another good one. He has 65 punts on the year for 2,709 yards, an average of 41.7, only 8 touchbacks, 14 fair catches, and a whopping 10 over 50 yards, his longest being 73. Shocking to me, BYU has had 3 punts blocked this year. Georgia Tech, Utah State, and Virginia all managed to block a punt. Because Arellano has only allowed 10 fair catches, this means teams are able to return punts against them and they have done so with moderate success. BYU has allowed 24 punt returns for 187 yards, an average of 7.8 with a long of 40. Boise State managed the 40 yard return. I want to take a look at this long return as well as one of the blocked punts to see what exactly happened. I'll also highlight the Utah State punt block. Onto the video... 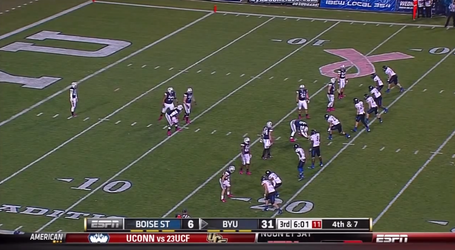 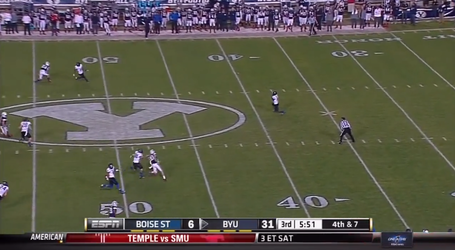 BYU's punt was relatively low and Boise State's return man had a lot of room to work with. He has a blocker to the top and the middle of the field is wide open with a blocker in place at the 45. 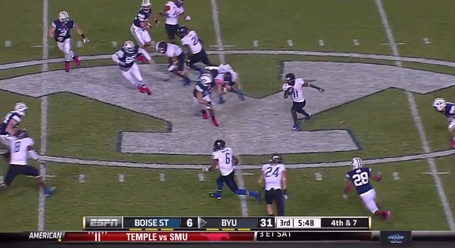 The return man chose the middle path and with blockers in place, a hole developed to the left-side of the field. You can see that he's making a beeline for it, provided he can get by the free BYU coverage man at midfield. If he does, he'll have a lead blocker (#6) with him. 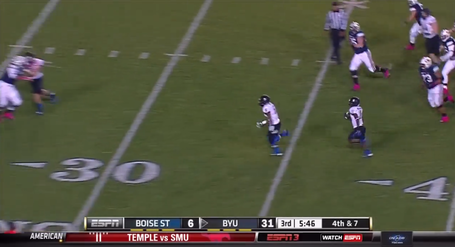 And he did. #6 is lead blocking for the return man and he has the sidelines plus two men (one being the punter) to beat. 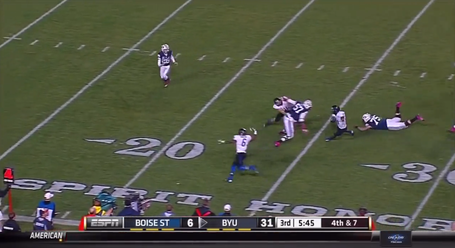 And the return man makes his fatal error on the return. He was looking towards the inside of the field and neglected to follow his lead blocker down the sidelines (you can see #6 yelling, probably, "What are you doing!?"). The Boise blocker on #57 for BYU couldn't hold him and he was able to grab onto the return man to stop the return. BYU really lucked out here. If the Boise return man had simply broken for the sidelines, he probably would have taken this one back. 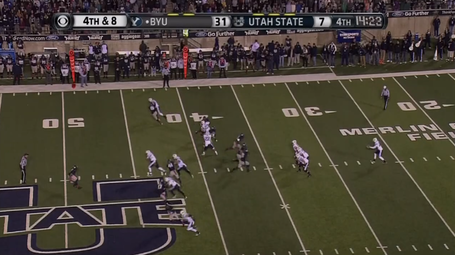 BYU rushed 3, as most teams do, to account for the blockers. On a side note, for those who watched the UCLA-Washington game and saw the fake, a rush like this would have prevented that fake from succeeding. Because the rear blockers on that play moved forward, the fake was obvious, and they could have prevented the punter from rushing for a first down. However, they backed up for a return and the punter had wide open field to get a first down. 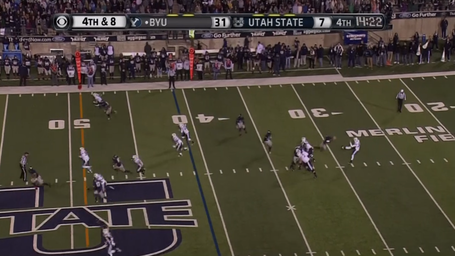 And what is somewhat inexplicable to me, the right rear blocker just let his guy go untouched to the punter. BYU is really lucky that this punt was not completely blocked (it ended up going forward and bouncing for a 31 yard net). This is not the only time this has happened to BYU this year and it is possible we could see ND with their first punt block of the season if they decide to take advantage of it. However, it may not be likely, as BYU has not allowed a punt block in over a month (last one to Georgia Tech).

Scared is the wrong adjective to use to describe how I feel about facing BYU's returners. Concerned is probably more accurate.

There is no nice way to say this, but BYU has some absolutely dynamic return men, probably the best the Irish will face next to Jalen Saunders from Oklahoma, Ty Montgomery from Stanford, and Nelson Agholor from Southern Cal. The Notre Dame coverage team NEEDS to play smart and keep their lanes if they want to keep the Cougars in check. That said, there are some bright spots. Middle Tennessee State, who gave up the most return yards to BYU including both long returns, is ranked 97th in kick return defense and 102nd in punt return defense. Of course, Notre Dame is 120th in kick return defense but who is counting. The point is BYU picked on a weak opponent and took advantage. Notre Dame needs to work hard on Saturday to prevent the same from happening to them. Let's take a look at the kick and punt returns. 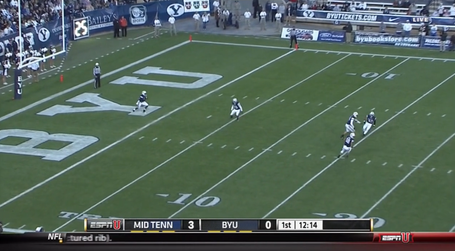 Hine fielded this ball about 1 yard deep in the endzone. He was credited with catching it at the goal line but to me, he looked about a yard deep. 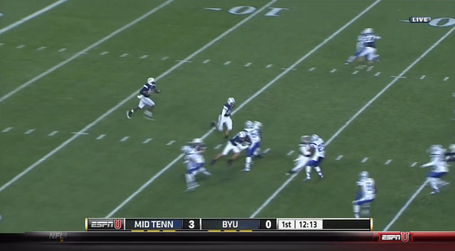 Now, to Notre Dame's credit, most of their failures on kick coverage are due to overpursuit and to losing outside contain. They have never had a problem like this: no people in the middle of the field. Still, you have to credit BYU here because almost every MTSU player has a BYU blocker on them. Hine is at the 10 already and has a lead blocker as well as a massive lane in the middle of the field. 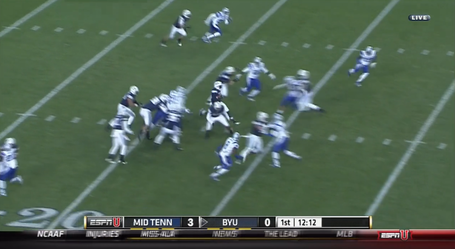 At this point, several MTSU players see the writing on the wall and are taking recovery angles. The refs missed a questionable block-in-the-back at the 25 but Hine has his hole and provided he can blow through it, he has clear sailing. This, ladies and gentlemen, is why you need to keep your lanes. MTSU has utterly failed on this return and it would take a miracle to salvage it. 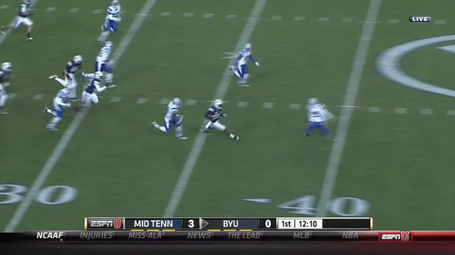 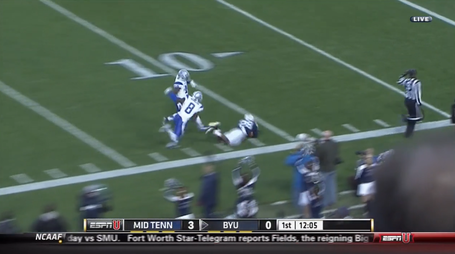 Hine juked by the kicker but MTSU took great recovery angles to prevent a touchdown. What also helped MTSU is Hine is not a speed demon and was caught from behind. Still, the damage was done. BYU can return kicks well, has great discipline with blocks, and will certainly take advantage of tentative coverage much in the same way Navy took advantage of ND's tentative coverage. To succeed in this game, Notre Dame is going to need to play smart, much smarter than they have all season. 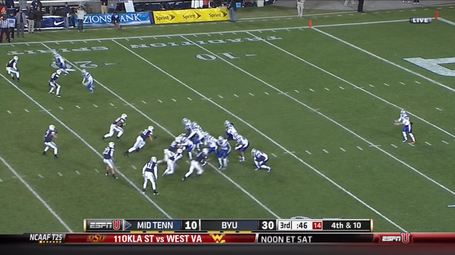 Well that certainly explains it. MTSU runs a hybrid version of the traditional punt formation. I have said time and time again that this formation will be the death of teams and in this game, it was no exception. 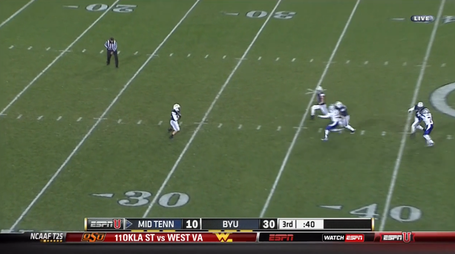 And this is reason numero uno why the spread punt is the way to go. MTSU had two gunners to the top side of the field. The MTSU punter punted to the opposite hash and these two gunners not only weren't downfield to stop it, but BYU has 3 guys back to block them. 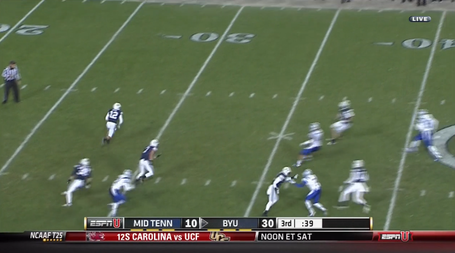 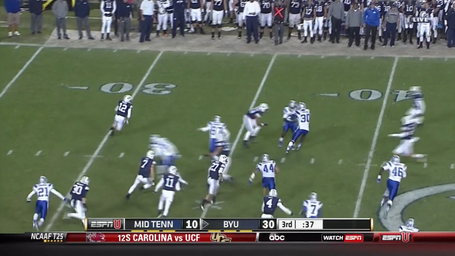 This must have been like MTSU's version of the Southern Cal game for us. The BYU return man immediately took off for the opposite sidelines and has a wall of blockers ahead of him. Look at the freaking sidelines--absolutely ZERO outside contain. 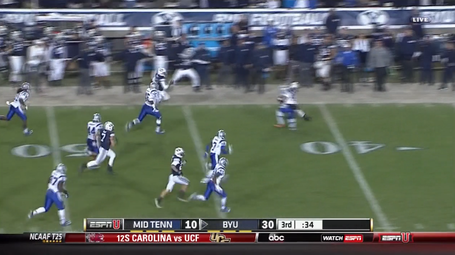 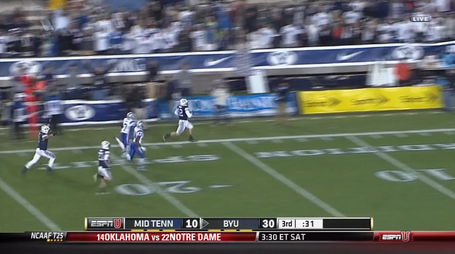 This was probably the easiest punt return of Falsev's career. He made absolutely no moves and simply switched fields and rode his blockers. I would like to say that ND's punt team is a strength and this is not going to happen to us but we all say the Southern Cal game and know that anything is possible. This was practically a mirror of Agholor's returns against us, minus the safety angles. BYU knows how to switch fields and knows how to take advantage of suspect formations. Notre Dame needs to be sure to maintain outside contain and to get downfield quickly for coverage. They have two tough return opponents in BYU and Stanford left on the schedule and they cannot let up now. One big return could make or break this game. ND needs to realize this and play smart.

As always, let me know your thoughts in the comments below.