They're not as morbid as they sound unless you eat them on a daily basis.  While funeral potatoes do get their name honestly as a staple served by Mormon church ladies to grieving families after funerals (they are also known as "church lady potatoes"), the name is more representative of their role as a comfort food, and as such, they are nearly ubiquitous in all forms of social gathering within the LDS Church from family dinners to neighborhood potlucks to baby showers to football game watches.  With the Irish hosting BYU this weekend, this dish is potentially a rich tapestry of symbolism, and since we are the most accommodating host team in the nation, I feel like it's a perfect fit to feature in this week's edition of Football Foods.  I should thank my pal Knuckles for bringing this dish to my attention.  Knuckles is primarily the brawn of the Voltron-like 6-man ND fan crew known as The Grid to which I also belong, but Knuckles seriously knows his food as well. 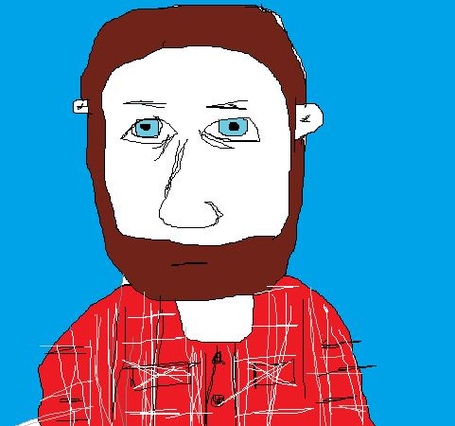 By and large, funeral potatoes are pretty straightforward and require minimal effort (at least the version I'm doing, a simplified version of this winning recipe from Utah's Own Funeral Potatoes Cookoff), but if you are a warrior poet in the kitchen then you should humor your compulsion to carry out expert manoeuvres like making your own cream of chicken soup from scratch and freshly grating your potatoes before frying them in duck fat and so forth.  But for now, for the sake of clarity and in keeping with the Mormon spirit of using ingredients that can be easily stockpiled, let's do it the easy way! 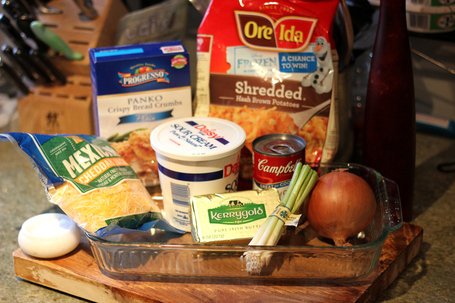 First things first:  preheat your oven to 350 by rotating the dial counterclockwise. 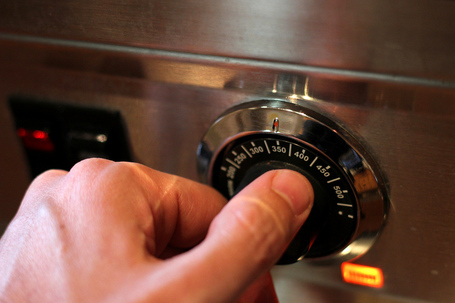 Next we dice our onion.  Don't ask how I was able to take this picture while chopping the onion. 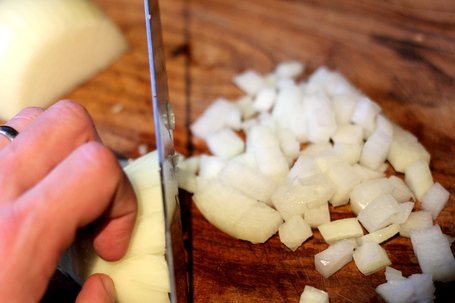 Now we melt our butter -- 1 stick in a large pan for the onions and potatoes and the myriad gloppy substances that will soon be introduced, and 1 stick in a saucepan to mix with the bread crumbs later on.  If you buy Kerrygold, just get the doublestick and chop it in half.  For the record, you don't need to use delicious Irish butter for this, but you should, because butter that comes from grass fed cows is better for your heart.  This is a ton of butter, by the way; you can actually smell cows when this stuff starts melting.  Oh, and here's a fun time killing link I stumbled upon:  I used this ridiculously comprehensive butter converter to not only convert cups of butter into sticks, but also to find my weight in sticks of butter and how many dekagrams of butter it would take to fill a kiddie pool.  Major time warp. 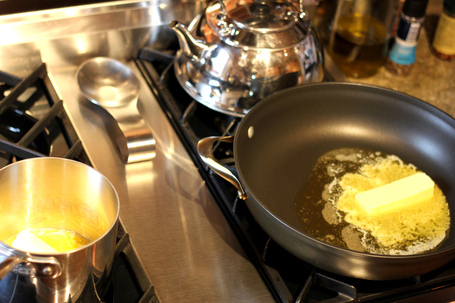 Once the butter is melted, turn off the heat on the breadcrumbs one, and then toss your onions in the big pan to poach them in the butter until they are translucent, stirring often. 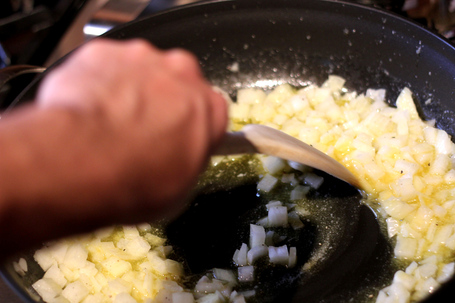 I am now the official OFD hand model.  Okay, so once those are translucent (about 7 or 8 mins), it's time to add the rest of our ingredients.  Remove the pan from the heat now and add the shredded potatoes which I've let thaw for a little bit already: 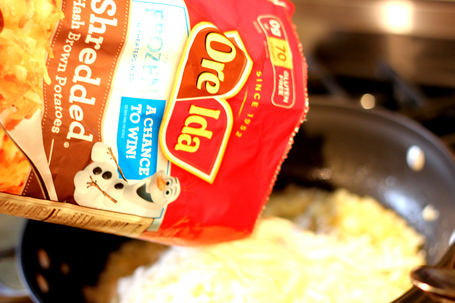 Also, add the 2 cups of sour cream (this is so much sour cream.  If you aren't the type that gets supreme versions of your food items at Taco Bell, then you might want to take a pass on the funeral potatoes this week): 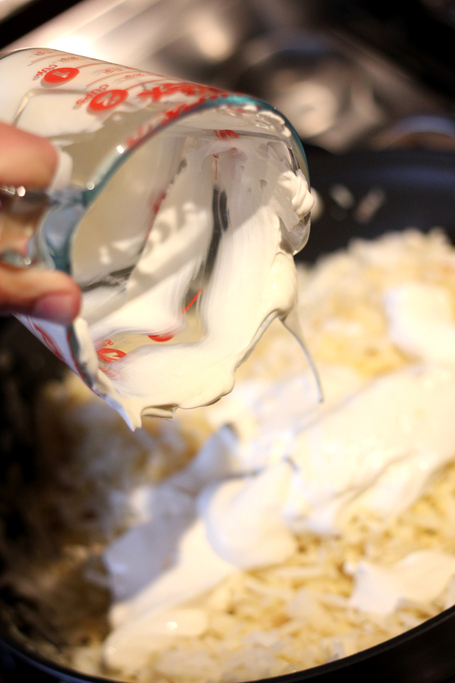 Next we add our cheese and our cream of chicken soup and plenty of salt and pepper so that we have a nice dairy summit.   You know you are about to eat football food when there is a dairy summit in your pan. 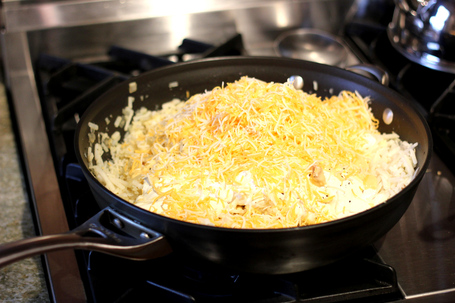 Combine everything well and transfer to a 9 x 13 casserole dish.  Flatten it out evenly once it's in there (not shown). 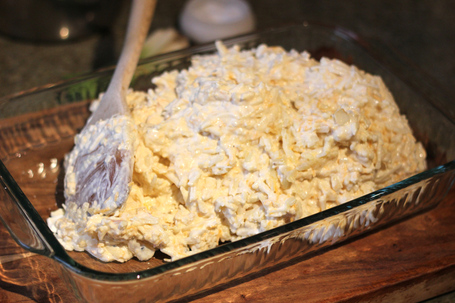 Now, add the panko bread crumbs to the saucepan with the melted butter and stir it up. 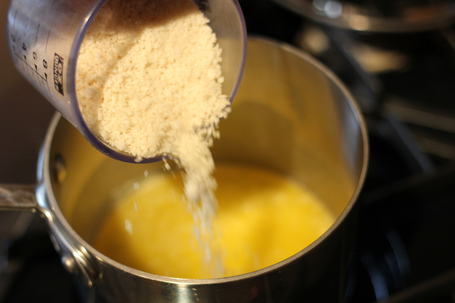 Spread the buttery bread crumbs evenly over top of the casserole. 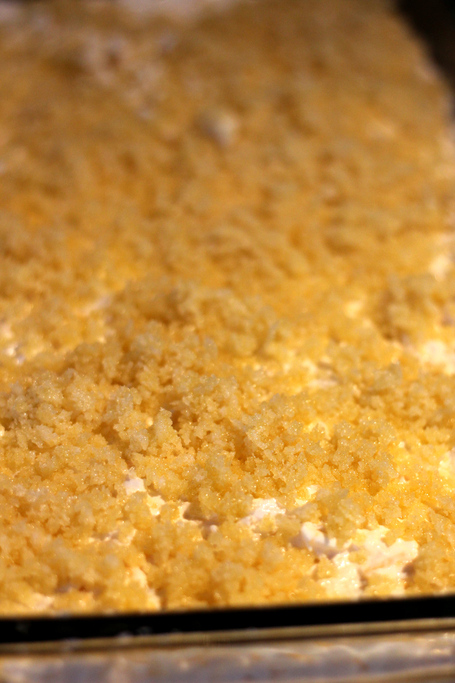 Finally, cover it with tinfoil, throw it in the oven, and bake it at 350 for about 45 mins.  While mine was baking I was taken back to a fond and familiar place, my grandma's house from when I was a child.  The smell was exactly like something she used to make -- it's the smell of old kitchens informed by Betty Crocker cookbooks from the 50s.  It's a very welcome smell and I'm now hopeful that this is going to taste amazing. 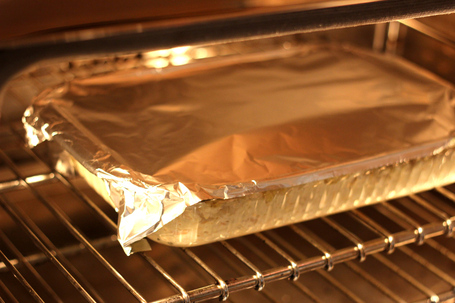 After 45 minutes, remove the foil, and bake for another 10 minutes or until the top is golden brown, like so: 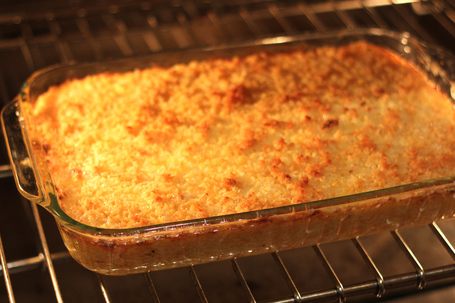 Chop up some green onions to go on top: 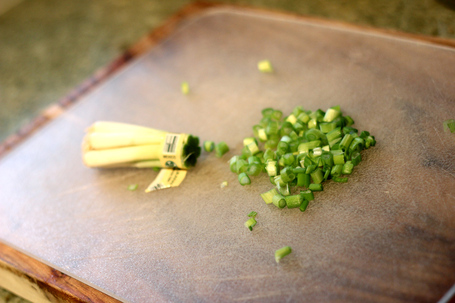 Let it cool for about 15 mins, then serve and eat! 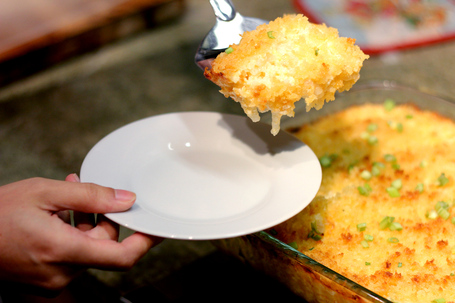 Mrs. ndmspaint does the honors

The verdict?  Delicious.  Perfect for the approaching cold weather this weekend.   Maybe a little bacon in there or some highfalutin cheese like gruyere would kick these up a notch, but at baseline these are tremendously flavorful potatoes, and rightfully so given the amount of fat and calories going into them.  I'm happy to say that even though they were an easy undertaking, funeral potatoes are still killer.