A breakdown of the veer in BYU's high-octane offense; and a look into the intricacies of the Cougars' hybrid 3-3-5 defense.

As Notre Dame faces off against Brigham Young on Saturday, the seniors will take the field at Notre Dame Stadium for the final time. Their senior season has been an up-and-down struggle: at times, showing flashes of putting it all together to be a very good team, and at other times looking like a team that is simply trying to win a losing battle against the long season and attrition through injury.

Last week's bye week could not have come at a better time for the Irish, who used the time to regroup, recouperate, and hopefully break down the upcoming matchup against the Cougars. BYU provides unique challenges on both sides of the ball: Bronco Mendenhall's men are a true up-tempo (one play every 19 seconds, on average) spread-option running offense, and their defense plays a hybrid 3-3-5 defense that utilizes primary playmaker Kyle Van Noy in many interesting ways.

In this edition of the OFD film room, I'll be breaking down one of BYU's core offensive packages, the veer and how to best defend it. I will also be taking a look at the defense of BYU to point out some of the common themes we will see when the Irish are on the offensive side of the ball.

In watching film on BYU leading up to this game, I noticed this play at the core of many of their offensive drives. The veer is a spread option play, but it differs from the zone read in that it reads the playside defender, instead of the backside defender. This makes it extremely valuable when running an inside zone with the running back, as it does not tip the direction of the play pre-snap. Here, we will take a look at an early drive in the BYU vs. Texas game where the veer was used in 2 out of 3 drives: 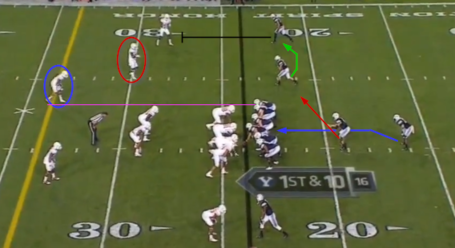 On the first play of the drive, BYU lines up in a pistol formation with a slot receiver to the right. They will run the veer with the added wrinkle of a bubble screen. Many spread option teams will run this type of play as a "new-age" triple option.

Just like a regular triple option, there are two defenders to be read (getting the count), from the outside shoulder of the tight end. Since Texas is in a strange alignment, the first defender that will be read is the safety (blue circle). After the first read, if Taysom Hill pulls the ball, he will move to the next outside defender to determine if he should throw the bubble or keep the ball himself. Generally, if the force defender (red circle) makes any movement to stop the run, the QB will throw to the bubble screen. They will almost always throw it if they see a cushion of 7-8 yards as is seen here.

For the play in question, watch as the safety immediately drops into coverage, giving hill the read to hand the ball off to the back. A simple gain of 5, and BYU has won first down: 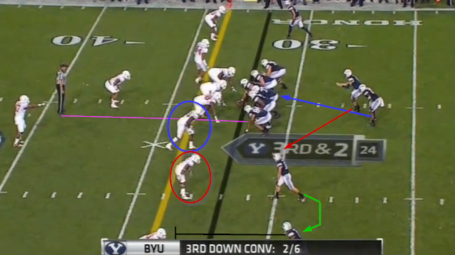 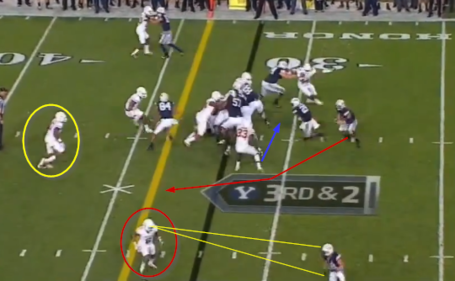 Here is the look immediately after the mesh point. Hill has correctly read that the rush end has crashed down in order to stop the running back. As he moves to his second read, the bubble screen, he sees that the nickel back has turned to defend the bubble. This will be a QB keeper all the way, and the only player with a chance to stop Hill before the marker is the strong safety (yellow circle). 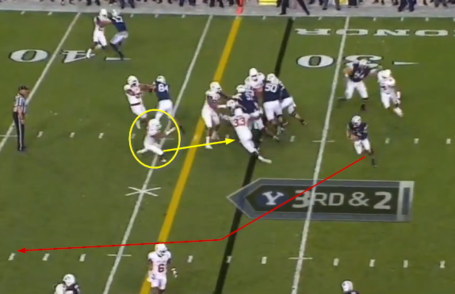 Here we see a perfect illustration of how NOT to defend the veer (or any read/zone option). Both the safety and the rush end have headed toward the running back. As a general rule, if you are going to crash the end, there needs to be a player responsible for "scraping" behind towards the outside to be able to handle the QB run threat. If you are going to keep the end home to prevent the QB from pulling the ball, the safety should be playing inside against the HB run. The golden rule is never to have both players defending the same option. If you do, and have a missed tackle from your free safety, then you could be looking at the QB's back all the way to the end zone: 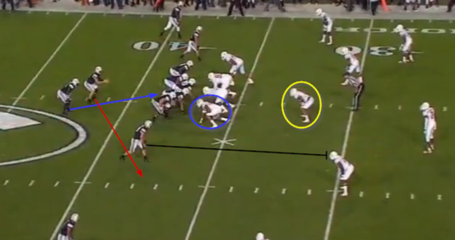 In this play, we will look at a well-defended veer. For this specific play, BYU does not have a bubble screen called in addition to the veer, which is unfortunate given the cushion the slot receiver is being given. Since there is no bubble screen to serve as a third option, there is only one player to be read, the defensive end (blue circle). It is important to take note that the linebacker (yellow circle) is on the inside of the end before the snap. 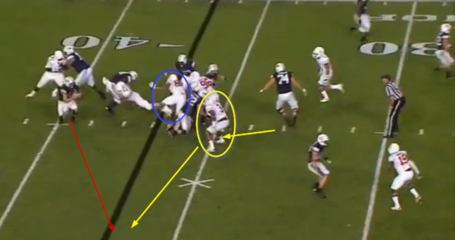 Immediately after the mesh point, Hill has pulled the ball as he has correctly seen the end crashing against the run. In stark contrast to the touchdown run above, the Texas linebacker has correctly "scraped" to the outside gap, settling in to prevent Hill from getting upfield. It is of utmost importance that this defender is able to get outside, avoiding blocks (BYU#74 on this play missed an assignment), otherwise the QB will be free to run. The linebacker was able to chase Hill down for a small gain on the play:

As we've seen from the above, the BYU offense is able to attack multiple points of a defense at the same time. It is important for the Irish to stick to their assignments on the edge and not double up, and it will be interesting to see how Bob Diaco schemes against the spread option look. Personally, I would use our ILBs where they are best suited, on the inside, and allow Prince Shembo and Jaylon Smith to roam the outside edges.

I would force Taysom Hill (52.4% Completion, 12 INT) to beat us through the air. BYU likes to use him on sprintouts/rollouts, and he's not the most accurate quarterback on the move. He is dangerous when he pulls the ball down on run/pass options, but his arm should be where the Irish try to force the game. I'd hope to see some more aggressive strong safety play (especially against slot receiver formations) in this game.

BYU's defense is extremely unique, but similar to a defense the Irish have already faced this season in Oklahoma. Their main goal is to allow playmakers like LB Kyle Van Noy (#3) and SS Alani Fua (#5) to get into free space to make plays behind the LOS. A good way to think of these two in the BYU 3-3-5 is to think of Van Noy as a Shembo-type linebacker, and Fua as a Jaylon Smith-type athlete. They will send rushers from extreme angles and strange alignments in order to try to get to the QB:

Here is one of the most common looks BYU will show out of its 3-3-5. Van Noy (red square) is in his "standard" rush linebacker position, and Fua (yellow square) is walked up on the line, a common practice for 3-3-5 teams. At the snap, Fua will blitz to bring 5 rushers to the line.

Of the plays I watched BYU's defense, they were bringing at least 5 rushers most of the time: the defensive line, Van Noy, and one of the members of the secondary. One of the benefits of playing a 3-3-5 is the ability for the whole coverage scheme to easily roll to either side of the field, allowing for blitzers from a variety of angles.

Along with BYU's base 3-3-5 seen above, they are also willing to change up their front occasionally:

Here we see BYU in an eagle front, with 5 men across the line. The defensive line (green circles) are heads up on the center and tackles, and Van Noy (red) and Fua (yellow) are in wide-9 techniques, looking to crash against the run or rush the passer.

I saw the above formation several times on film, and believe this will be the formation we will see out of BYU most of the day against our two-TE sets. It will be imperative for the players responsible for blocking the edge to ensure that Fua and Van Noy are unable to crash in against the inside run, as well as seal them inside when we are attempting to gain the edge.

Something else of note is the cushion that the BYU secondary is giving the Texas receivers in the above image. This is a constant theme I saw through all the games I reviewed - BYU's secondary doesn't have extremely great athletes, and they make up for it by allowing a large cushion. When they do bring pressure that requires tight man coverage, I believe that will be a great opportunity for Notre Dame's receivers to simply out-athlete the Cougar secondary.

I'm extremely interested to watch this matchup on both sides of the ball, but especially how Coach Diaco and the Irish defense will come out to defend Taysom Hill and the extremely fast spread option attack of BYU. I'm also a little worried that the thinned-out defense will lose a step or two as the game wears on.

On the offensive side of the ball, I think we will see an efficient performance from Rees & Co., highlighted by several BIG plays to our wideouts. As always against a 3-3-5, I think the opportunity is there on the ground (see the Oklahoma game), and it will be used to draw more and more pressure until Notre Dame can go over the top. It should be an interesting chess match, let's hope that the Irish are there to play for the seniors and bring them a win.