Notre Dame and Navy: Why We Play, Part 2

Share All sharing options for: Notre Dame and Navy: Why We Play, Part 2

In Part 1 of our little ND-Navy history course, I did my best to answer the question of "Why the heck does Notre Dame still play Navy?" In a nutshell, for those of you who didn't read (or forgot) Part 1, we still play Navy because Notre Dame nearly ran out of students and money (both of which are kind of important to a school), we asked the Navy to save our bacon, and they swooped in with thousands of naval students and kept the place from ignobly fizzling out of existence. Caught up? Good.

For this second half of ND-Navy series history, I want to shift the focus from cold stats to more deeply personal anecdotes--stories highlighting how the friendship between ND and USNA deepened in the years following World War II.

It began on November 12, 1945 when ND President Rev. J. Hugh O'Donnell, C.S.C. addressed the last-ever graduating class of the Midshipmen School at Notre Dame. After speaking about the importance of "God, Country, Notre Dame", Fr. O'Donnell humbly thanked the Navy for its support:

Notre Dame and the Navy have a long-standing friendship, and it was our good fortune to have the bond come even closer during the war[...]Not only Notre Dame, but higher education generally, is indebted to the Navy for its policy with regard to institutions of higher learning. At the time when education was suffering severely from the impact of war, its approach to university problems was intelligent and sympathetic.

In addition, Notre Dame also thanked Admiral Chester Nimitz--the man who had famously answered Fr. O'Donnell's plea for help back in 1941--with an honorary degree in 1946. When receiving his degree, Admiral Nimitz--now Chief of Naval Operations--remarked how ND trainees "absorbed not only Notre Dame's traditional fighting spirit, but the spiritual strength, too, that this University gives to all who come under its influence."

Notre Dame and Navy did not simply "go their separate ways" after the war.

It was through the generous and patriotic service of institutions such as Notre Dame that this nation emerged victorious[...]We sincerely appreciate these friendships [with ND and others], and we hope that through the continuation of the NROTC and Naval Aviation College Programs, these friendships will long be maintained.

Now, you're probably saying, "Okay, okay, we get it--ND and Navy became best buddies. But what does all that have to do with playing football?" Well, the first big step occurred in 1947, when Notre Dame Coach and AD (and Navy veteran) Frank Leahy officially renewed the series through 1949. While it was not yet a long-term deal, it was a clear sign that Notre Dame was determined to keep up good relations with Navy; it was telling that even as they extended the Navy series, ND broke off its game with Army from 1948-1956 because of bad relations. 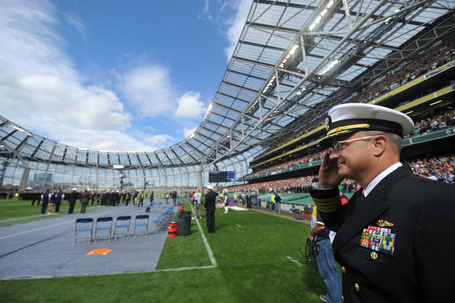 It is impossible to speak about the ND-Navy friendship without mentioning Father Theodore Hesburgh, C.S.C. President of Notre Dame from 1952-1987, Father Ted was responsible for many historic decisions. For our purposes, his love for the Navy (due to his time spent as a Navy chaplain) played a huge role in the strong bond between the two institutions, both on and off the field.

"It is a wonderful reflection of our rivalry that we can fight such a terrific battle and still be such good friends." -Fr. Theodore Hesburgh (1954)

While he was still Executive Vice President, Fr. Hesburgh was appointed to a three-year term as chairman of USNA's Board of Visitors; to this day, he enjoys recalling how the Navy cadets would parade by his Annapolis office during ND-Navy Week chanting "Beat ND!" until he poked his head out and replied, "Beat Navy!" In a 1951 letter to USNA Superintendent Harry W. Hill, Hesburgh thanked the Naval Academy for its hospitality, saying,

We are all very happy in our association with the Navy. Be sure that this game brings us more pleasure than many others which we play during the season, because of the opportunities to renew so many old associations.

After becoming President the following year, Father Ted continued to visit the Naval Academy and build friendships with its administration. A 1954 letter to USNA Superintendent W.F. Boone stated,

I do not know how to thank you for your wonderful hospitality this past weekend. I never felt more at home in so short a time. It seems to be a wonderful reflection of the Notre Dame-Navy rivalry that we can fight such a terrific battle and still be such good friends before and after[...]P.S.: I hope you beat the tar out of the Army and make muleburgers of their mascot!

And in a 1956 letter to yet another USNA Superintendent (Rear Admiral W.R. Smedberg), Fr. Hesburgh confided,

This is the only away game that I will be able to attend this year, but at the beginning of the season I put it down as a "must" on my calendar. As you know, we greatly cherish our associations with the Navy and, despite the outcome on the gridiron, always come away enriched by our meeting with your wonderful officers, your staff, and the midshipmen.

"Myself and the guys before and after me never had the slightest doubt that we ought to keep playing Navy." -Fr. Theodore Hesburgh

These three letters sum up much of the goodwill that still characterize ND-Navy relations to this day. But once again, how exactly did this affect the football series? To this end, I asked Father Ted for his own account of how the series really got rolling and stayed rolling. Although some of what he told me has already been covered here, he had a few nuggets to offer--since, y'know, he was there when it happened.

FDM: Father, there's been quite a bit of confusion about how exactly the Notre Dame-Navy series became a permanent thing. Most articles I've found suggest that some kind of agreement was made back in the 1950's, but no one seems to actually know any details about it. Do you remember if there was some kind of "magic contract" that said we would always play Navy, or was it more of a gentleman's agreement?

FTH: No, it just happened--it's one of those unspoken traditions. I think myself and the guys who came before and after me as president never had the slightest doubt that they ought to keep playing Navy. It also ties us in with the naval unit we have on campus. The Notre Dame-Navy connection is very close--we're like a big family.

FDM: Were there ever any times during your presidency when people questioned the decision to play Navy every year?

FTH: Well, during the Vietnam War there was a lot of anti-military sentiment going on. But I said that if we have to help the country in this problem, then we're going to help them. We're available. So the football rivalry wasn't the biggest thing in the world, but it was symbolic. And during that time, [longtime AD] Moose Krause was a good  influence here and a very good leader--he handled a lot of things in-house.

FDM: What are some of your personal favorite moments or memories from this series? They don't necessarily have to be from the games themselves.

FTH: We always took good care of the admirals when they came over here for the games; during those unbalanced years [the 43-game ND win streak from 1963-2007], we never rubbed it in their faces. If things got a little out of hand during the games (as they often did), we'd kind of put our 4th-string in there; that way, the backups would still get some experience, but we wouldn't clobber them. We'd beat them, but we didn't clobber them.

FDM: Currently, it looks like the coaches and AD's are still on the same page with regards to Navy.

FTH: That's right, they have no problem at all with Navy. They're always going to be on our schedule. 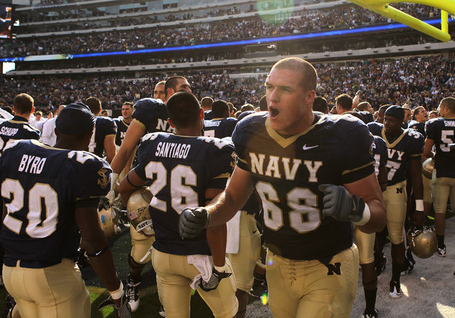 The foundations of ND-Navy that were laid by Rockne, O'Donnell, Leahy, and Hesburgh continue to bear fruit to this day. In a 1997 speech at Notre Dame, Secretary of the Navy John H. Dalton echoed what many Navy officials had spoken throughout the last half-century:

There is a great history of cooperation between the U.S. Navy and Notre Dame; a history that began with that famous agreement between Father O'Donnell, and Admiral Chester Nimitz. During that period, Notre Dame produced so many naval officers, it was referred to as "Annapolis West." Thankfully, this great institution continues to lead in the training of naval officers. Notre Dame has more Naval R.O.T.C. scholarships than any other university in the Country[...] I am truly grateful for your commitment and untiring advocacy of our Navy and Marine Corps.

With the exception of the Commander-in-Chief's Trophy, the Notre Dame-Navy rivalry is the only one of its kind.

In 2006, the series was renewed through 2016. At the time, Notre Dame AD Kevin White and USNA AD Chet Gladchuck both spoke in glowing terms about the series, its rich tradition, and how important it was to fans of both schools. In September 2012, AD Jack Swarbrick stated that "the tradition of playing Navy has very deep and important roots for the University." And earlier this season, Coach Brian Kelly emphasized that Navy would always be the first game that Notre Dame schedules every year.

So there you have it, everyone. The next time someone tries to claim that we should stop playing Navy because they're soft, we're bullies, or because it's "not a real rivalry", go ahead and tell them the story of how Navy saved Notre Dame. Sure, we want to beat Navy whenever we play them...but among the rivalries of college football, Notre Dame-Navy is one that is not built on hatred or even grudging respect, but is instead founded on a lasting bond of friendship and sacrifice.

Part 1 of "Why We Play" is located here.

A huge thank-you goes to the Notre Dame Archives, the Naval Academy Archives, and Father Ted Hesburgh for their assistance with this two-part series! If anyone would like a full bibliography, please email me at mosesofd@gmail.com and I will be happy to send it to you.