Exploring the influence of Junior College transfers, prep school post-grads, and incoming transfers around the country and at Notre Dame.

Editor's Note: This is not an attempt to persuade anyone for Notre Dame to change its ways, but merely to show how some teams operate differently. I cannot guarantee that every single stat is 100% correct but they should be darn close.

The research for this post began because I was curious about which programs have the most junior college transfers and also I wanted to know what the JUCO numbers look like in each of the 5 power conferences. It then expanded to to include a few more topics on maintaining roster health in college football.

If you're an Irish fan I'm sure you are aware that Notre Dame doesn't have any JUCO players on the football team and hasn't for many years. The reason is that anyone who is forced to go the JUCO route out of high school will be so far behind the junior-level course work at Notre Dame that it's virtually impossible to graduate over their final two years on campus. This also assumes an athlete will still want to stick with the Fighting Irish after 2 years anyway. In short, it's just not worth the coaching staff's time and the subsequent admissions headaches.

But other schools admit junior college transfers. Some use them to plug roster holes from time to time while others use the JUCO ranks as a first-stop in recruiting.

Here's a look at the total number of junior college transfers in each of the major football conferences: 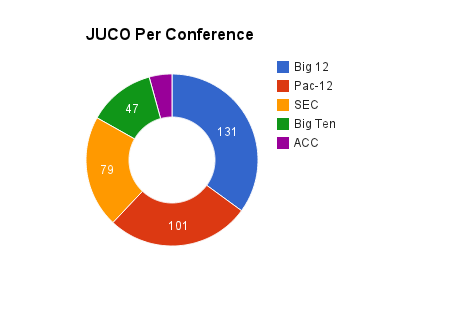 It doesn't take a rocket scientist to see why---at least through the lens of junior college transfers---Notre Dame fits in with the ACC far better than any other conference. For the 2013 season the ACC only has 16 JUCO transfers within the entire league.

Now here's a look at the JUCO representation for 2013 within each conference: 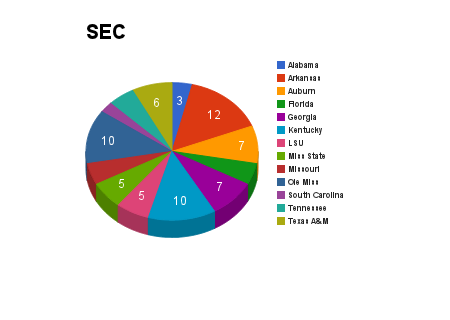 The only school in the SEC without any junior college transfers of course is Vanderbilt, the most academically prestigious school in the league.

The teams not labeled above are Florida with 4, Missouri with 4, South Carolina with 2, and Tennessee with 4.

You'll notice a little bit of a trend where the really elite recruiting programs for the most part don't sign a ton of junior college teams. For example, Alabama doesn't rely on JUCO's very often although they did have 3 starting in last year's title game against the Irish. Another trend is that you sometimes see a big spike in JUCO's when a new coach takes over and in the SEC the top 3 teams with the most junior college transfers either have first or second year head coaches. 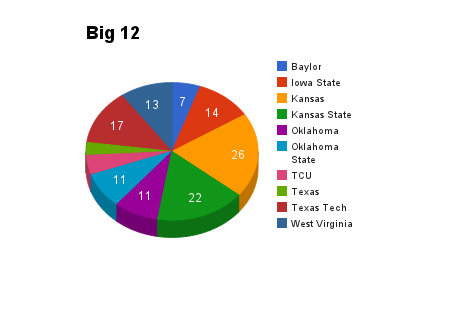 The Conference King of JUCO Talent!

The Big 12 is the only major conference where every team has at least one junior college transfer. The teams not labeled above are TCU with 6, and Texas with 4.

Everyone knows Kansas State's history with junior college transfers but the Wildcats have now slipped to 4th most nationally in 2013. The new national leader in JUCO's is Kansas as Charlie Weis has signed 27 such players over his last two classes and kept all but one on campus so far. 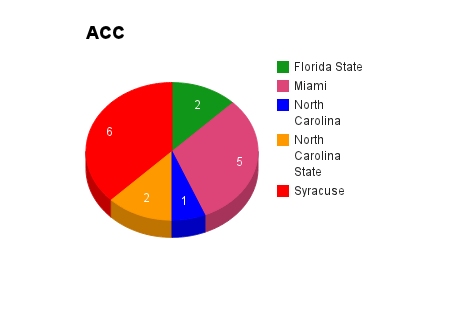 Boston College, Duke, Georgia Tech, Maryland, Pittsburgh, Virginia, and Virginia Tech all don't have a single JUCO on their roster.

Clemson is another ACC team that doesn't have any JUCO's currently on its roster but it does have 7 players from the boarding academy powerhouses Fork Union and Hargrave Military. Four of those players were 20 years-old during their freshman year and another turned 21 years-old during his freshman season. 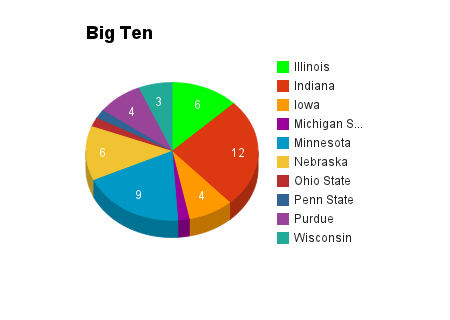 Two teams in the Big Ten are without junior college transfers: Michigan and Northwestern. 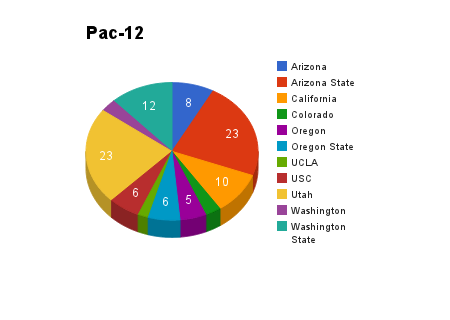 I'm not sure if it's always been part of Kyle Whittingham's recruiting philosophy or a reaction to joining the Pac-12 but for this season his program is tied for the 2nd most JUCO players in the country. Utah is joined by Arizona State as the bulk of Todd Graham's two classes have been from the JUCO ranks.

The teams not labeled above are Colorado with 3, UCLA with 2, and Washington with 3. The only team in the Pac-12 without a junior college transfer is Stanford.

Other ways to bring in talent---particularly seasoned and older talent---to maintain a healthy balanced roster is to utilize prep schools (like the Clemson example above), gray shirt, or seek out good old fashion transfers from other 4-year schools.

Prep schools could be a route for Notre Dame to explore but that too is usually a waste of time. A lot of athletes graduate high school and then take a post-grad year at a prep school but these aren't usually the type of high-caliber recruits that the Irish seek out each cycle, plus there's always the usual academic concerns. The on-going issues with Isaiah McKenzie could be a situation where a year at prep school might work for the Irish but not if McKenzie simply decides going to someplace like West Virginia is better for his career.

Grayshirting is a controversial tactic used by several schools but it will never work at Notre Dame. They can't stash players in a JUCO for a couple years and the school won't let a freshman take under 12 credit hours to preserve a year of eligibility while they hang out on campus for a semester or two before a scholarship opens up.

Bringing in transfers from other 4-year schools is another area of the roster where Notre Dame typically doesn't dabble all that much. Since the start of 2009 the Irish have only welcomed the following transfers who were given or eventually earned football scholarships:

Not many transfers who have made an impact over half a decade, right? The welcoming of transfers can vary throughout all the programs across the country but Notre Dame's last opponent the Pitt Panthers had 6 transfers on their roster including the starting quarterback, third leading receiver, starting defensive end, and the safety who intercepted Rees twice.

Not only does Notre Dame go without any JUCO's, prep post-grads, and very few transfers they've also lost the following players since 2009:

That's a lot of players leaving and not enough coming in to make up for their loss. Of course, this does allow Notre Dame to sign full 25-man classes (or thereabouts) from time to time as we're seeing over the last two recruiting cycles but adding a couple ready to play 20 year-olds can make life easier. Just ask Auburn who won their last national title led by quarterback Cam Newton and defensive tackle Nick Fairley and are making their current miraculous turnaround to 10-1 on the backs of JUCO transfers quarterback Nick Marshall and running back Cameron Artis-Payne who have combined for 1,391 rushing yards and 14 touchdowns this season.

So you can see how the numbers game and maintaining a healthy roster is difficult for a school like Notre Dame. The margin for error is very thin, you have to get lucky with injuries, and finally develop the heck out of your 18-year old freshmen with the hopes that they won't skip town.