"Look, even *I* lost at Heinz Field once. So quit your moping." --Batman

See? The sky hasn't fallen yet, people. Four days after an ignominious loss to the Panthers (not the Florida or Carolina variety), we're still alive and our beloved Fighting Irish still hold a horrendous, disgusting, pathetic, completely inexcusable very respectable 7-3 record with BYU, Stanford, and a bowl game(!) remaining. Trust us, it's really not that bad. So you can put away those paper bags and "FIRE KELLY" signs now. I SAID PUT THEM AWAY RIGHT NOW.

Well, I won't sugarcoat it for you, dear commenters: much like the margin of victory against Navy, the crop of TSW-worthy photos from that game was pretty slim. But much like the team itself, this is the stretch of the season where we have to give it our all, even through the highs and the lows. So even though Cam and George's gravity-free TD celebration was not quite the stuff of legends that we have become accustomed to for TSW, you guys still played your hearts out for the full 60 comments. To wit, we have two (composite) comments that deserve honorable mentions for their ELITE teamwork skills
[click for full]: 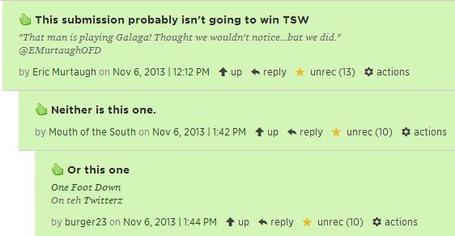 ...and the correction of a rather shaky penalty call. (And you guys thought no one would see these late comments!)

But although the TSW voting process is nothing if not crowd-pleasing, no amount of pandering will change the fact that there can be only ONE victor. Drumroll, please......

Excellent job, Mr. Burns! (No, not that one.) By golly, you may have just uncovered the secret to finally beating those cut blocks: just have the defense jump over the O-line every time! Anyways, congratulations on your week-long monarchy. As your reward, you get to pay the airfare for the OFD Staff Bye Week trip to Disney World! Ha ha! Ha! Betcha didn't see THAT coming, did you?? ...Seriously, though, make sure you fix all those clocks that CleverScreenName broke when he switched them to that imaginary "Central Time Zone".

Well, the rest of the staff has already analyzed just about everything there is to say about this game, so I'll simply do my shtick and let you guys do your thing. This week's Trick Shot Wednesday entry displays our beloved defender Bennett Jackson defending a pass intended for Pitt's Devin Street. And by "defending", we mean "getting flagged for a very questionable pass interference call when the ball went BOIIIING off of his upper body. But as the saying goes, "Bad luck smiles at us all...all a fan can do is smile back." So it is with a defiant spirit that we go into our second bye week, my friends...and nothing says "defiance" like coming up with a caption that perfectly encapsulates the scene depicted above and then clicking on shiny gold stars to vote.

Use the bye week to refill your heart medication, and we'll see you in the comments!