OFD Films: What is wrong with Notre Dame's defense?

Our defensive issues exist on many levels

Share All sharing options for: OFD Films: What is wrong with Notre Dame's defense?

What a difference a year makes. Last year Notre Dame had one of the best defenses in the country. This year? Not so much. This past Saturday many of the shortcomings we have seen throughout the season were on full display at Heinz field. Let's take a look at the film and I'll show you what I mean. 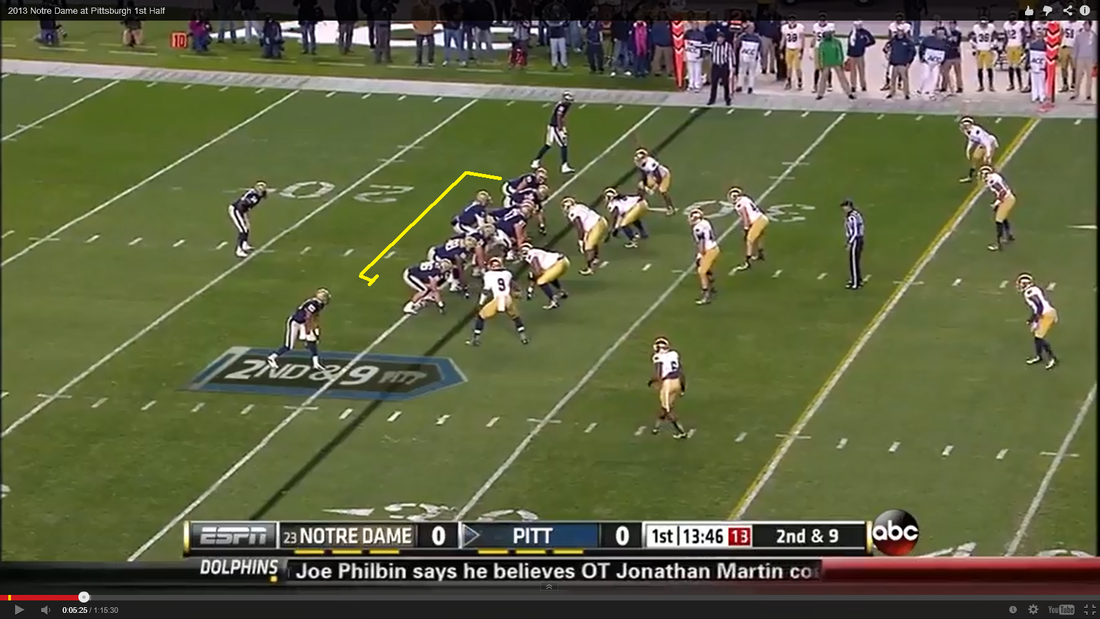 Pitt is going to motion the tight end to the other side of the formation, giving them two tight ends to one side. Logic suggests that Notre Dame would slide over with the motion to make sure they don't get out numbered pre-snap. 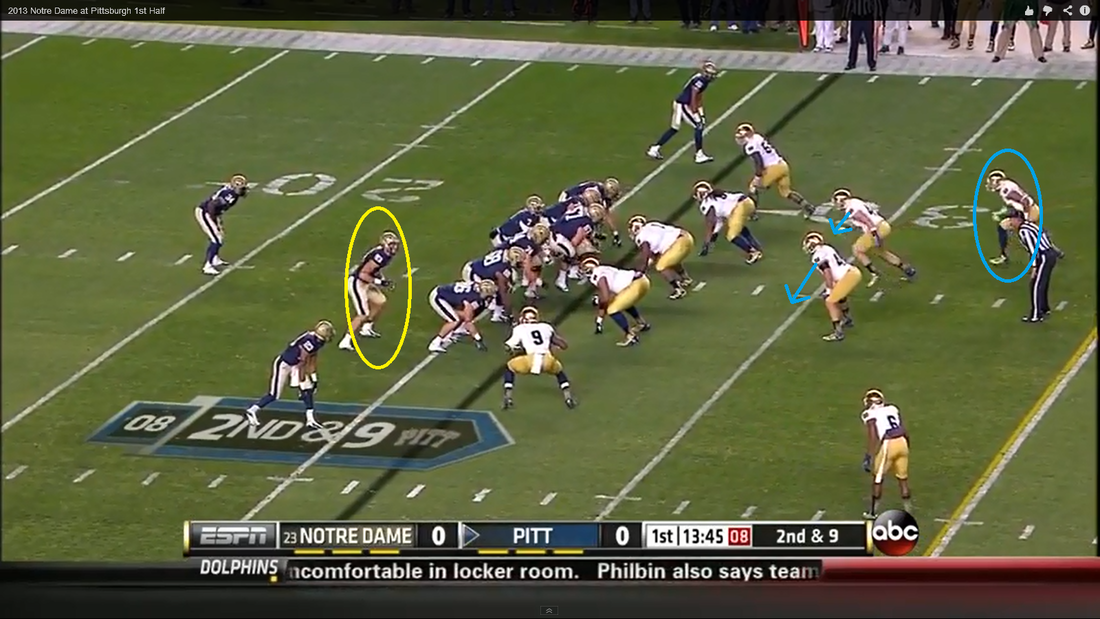 The circled tight end has motioned over. What Notre Dame should do is slide their linebackers in that direction. Instead, they do nothing. The only reaction from the Notre Dame defense is the safety creeping toward the line of scrimmage, on the opposite side of the extra tight end. 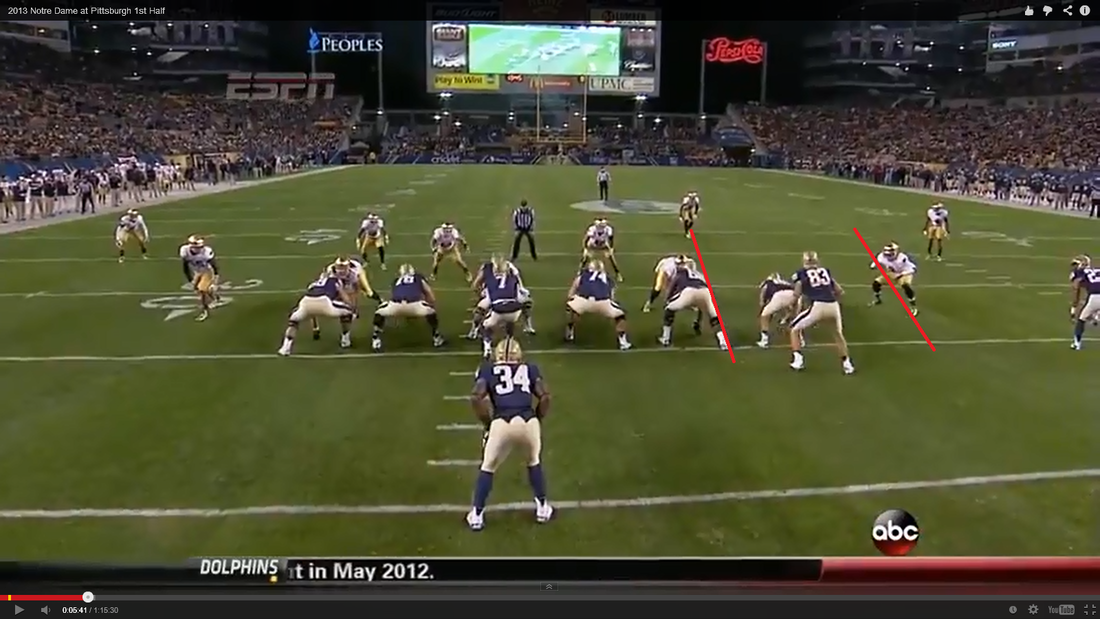 The lack of adjustment by Notre Dame has created a rather large alley where Pitt has a clear numbers advantage. This highlights an on-going issue for the Fighting Irish defense. In fact, we saw this same problem in the national championship game (click here for article). Notre Dame has a tendency to get mesmerized when other team moves their players. The lack of response by the Irish defenders doesn't happen all the time. It's most prevalent when Notre Dame is blitzing. I suspect the Irish defenders are so focused on blitzing that they forget to consider the formation. This creates two key problems for Notre Dame. The first is illustrated in the screen shot, the defense gets outnumbered. The second is when Notre Dame doesn't adjust to an obvious shift, it tells the offense Notre Dame is likely blitzing. 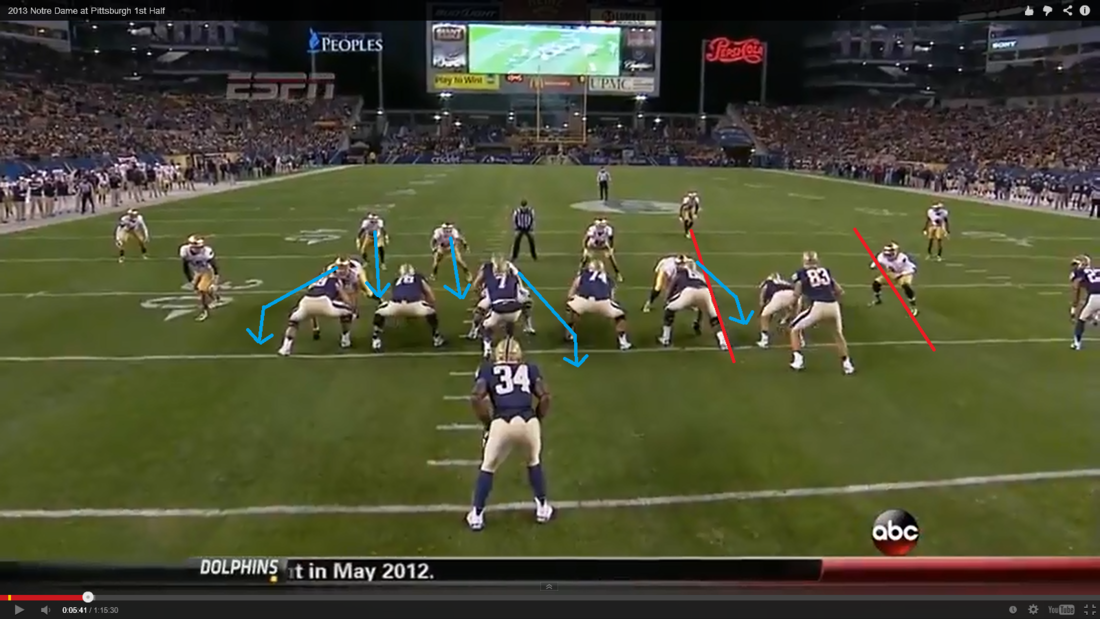 Notre Dame will slant Louis Nix III (# 1) and defensive end Stephon Tuitt (# 7) to the wide side of the field and blitz Eilar Hardy (# 16) and Carlo Calabrese (# 44) from the short side of the field. 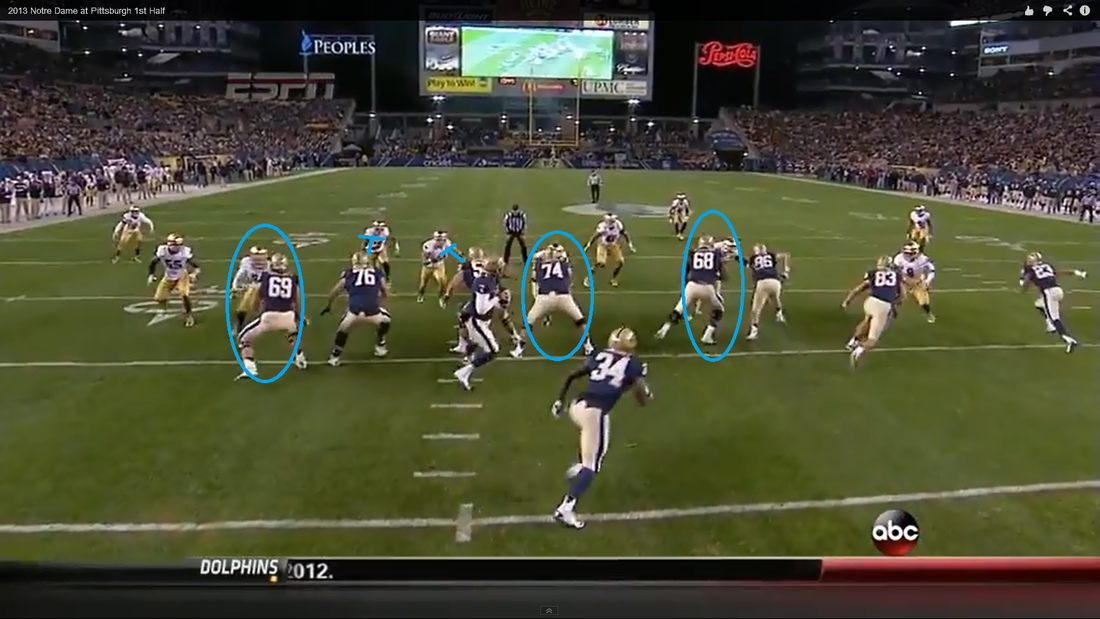 The blitz is poorly timed and its design is suspect. The image clearly shows that a relatively inexperienced Pitt offensive line had little trouble picking it up. One guard takes Louis Nix on the slant, the offensive tackles take the defensive ends, the other guard and center pick up the blitzing Notre Dame defenders. Pretty easy stuff. 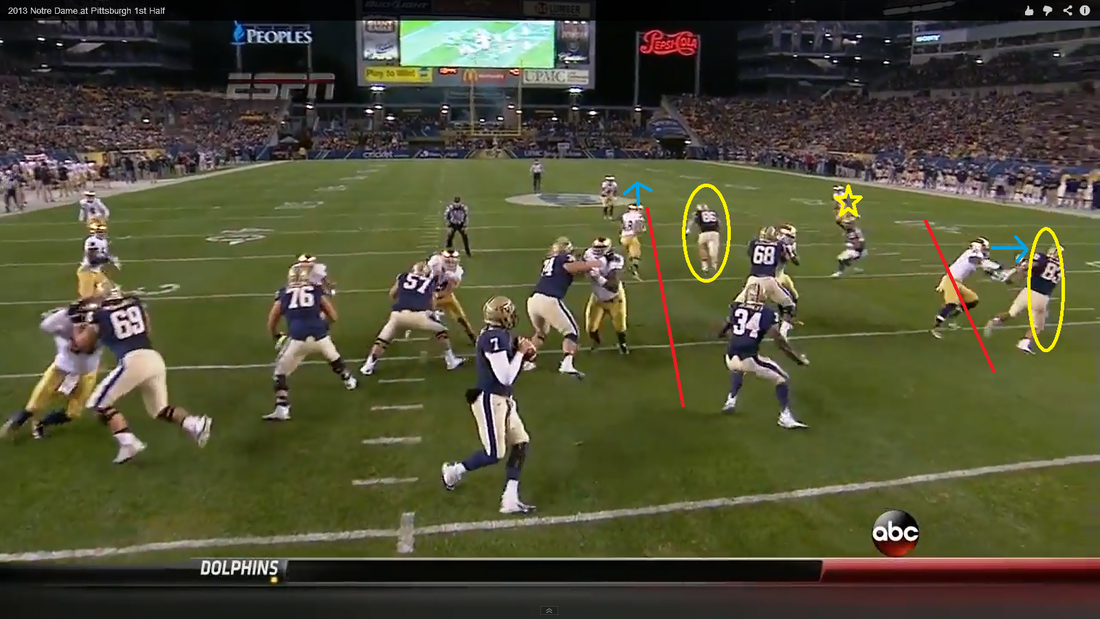 Often teams will run off tackle with this type of numeric advantage on the edge. Instead the Panthers decided to pass. Of course, this numbers advantage is also helpful in the passing game. In fact, Pitt makes the situation even worse by forcing Jaylon Smith (# 9) to get width covering the out pattern, creating a pretty obvious hole to throw into.

This play also demonstrates another persistent weakness in the Notre Dame defense. We struggle in zone coverage. Opposing teams have done a great job of preying on the fact that our safeties tend to get too deep (note the depth of the safety in this play), our linebackers are not great in space, and neither close rapidly when the ball is in the air. In this particular case, Pitt simply reads the drop of inside linebacker Dan Fox (# 48). He runs with the tight end on the vertical pattern so the quarterback throws to the underneath route (yellow star). The Notre Dame defense has been victimized by this type of play design all year. The lack of pre-snap adjustment and poorly executed blitz make it even easier for Pitt.

There you have it, one play highlighting a number of flaws in the Notre Dame defense. First we don't adjust to movement by the Pitt offense. This puts us at a disadvantage before the ball is even snapped. Second, we telegraph a poorly timed blitz , that isn't overly complex, making it pretty easy to pick up. Finally, our inability to effectively break on the ball and make plays in space leads to an easy first down for the opposition. Check out the video, it's not any better at full speed. 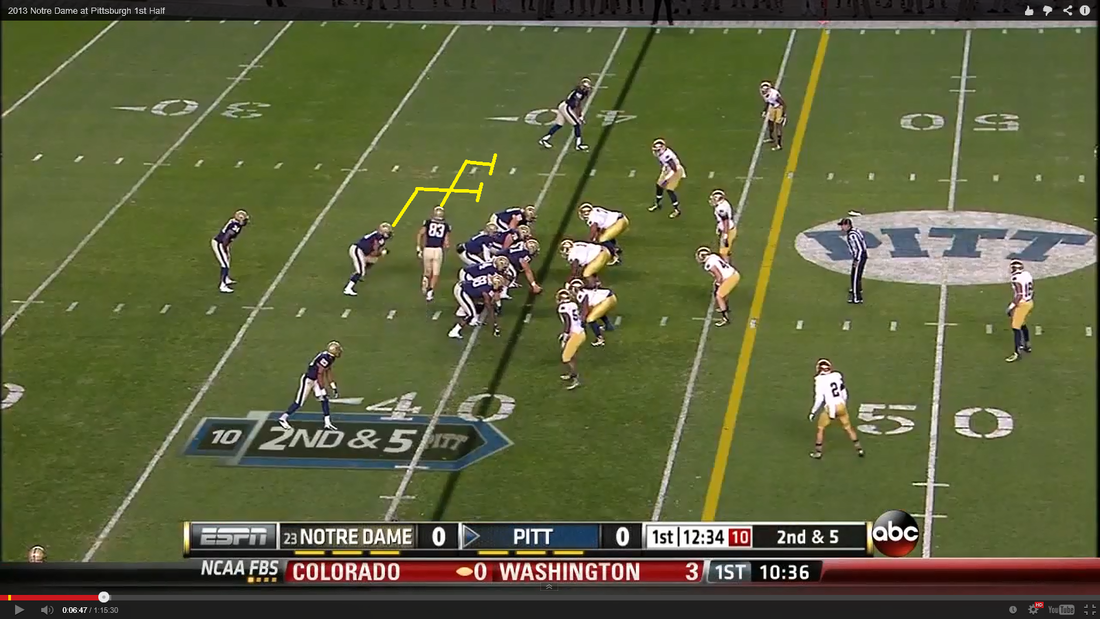 This time Pitt will move two players to the left of the formation (defensive right). Two players move, obviously Notre Dame will make an adjustment, right? 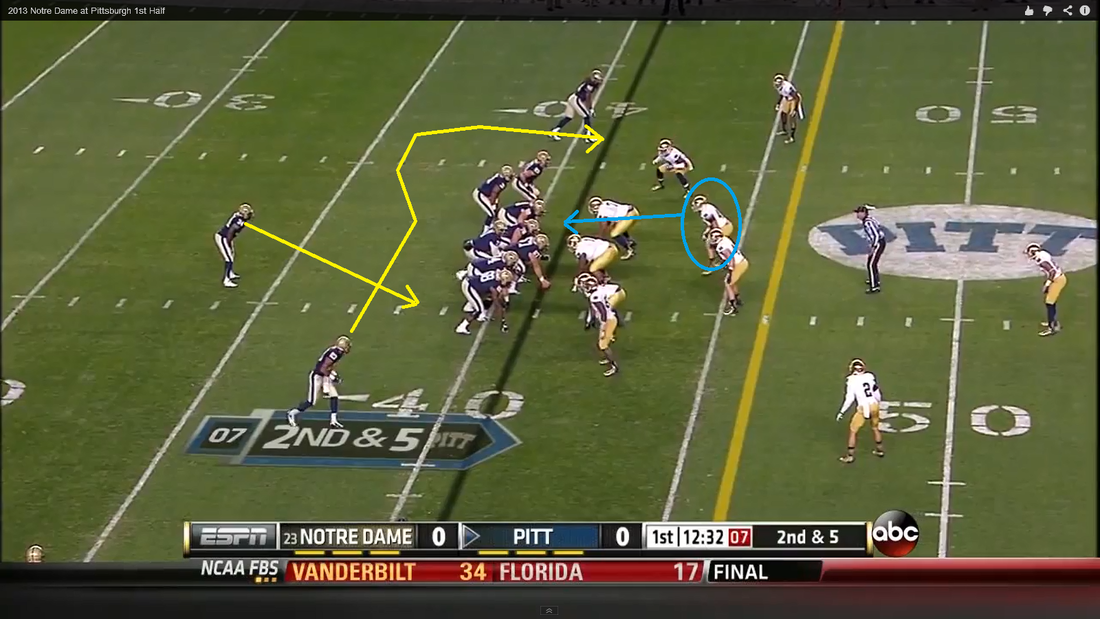 The play will be a fly sweep to Tyler Boyd (# 23). As an aside I coached the fly offense for many years at the high school level, it's a very effective offense. I'm also familiar with pretty much every adjustment a team can make to defend this play. To be honest, Notre Dame does a very poor job here. 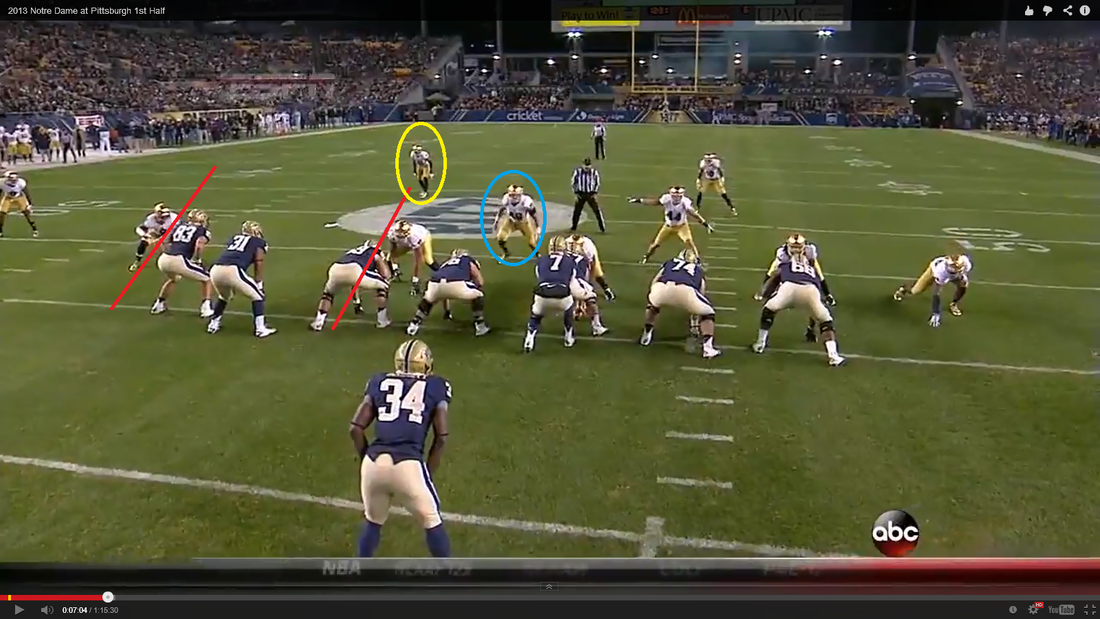 Can you guess where Pitt is going to run? Once again they've created a nice alley with a numbers advantage on the edge of the defense. The two players who should be responsible for filling that alley are Matthias Farley (# 41, yellow circle) and/or Dan Fox (blue circle). Unfortunately, Dan Fox is blitzing. I have to say, I'm not a big fan of the design of this blitz. Fox simply runs straight ahead into the guard. I get the concept of a run blitz, but what is the point of running a linebacker straight into the guard? This blitz reminds me of the type of strategy used on the front lines in World War One. Send waves of soldiers over the top and attack the enemy's trenches in a frontal assault. Not very smart or effective. 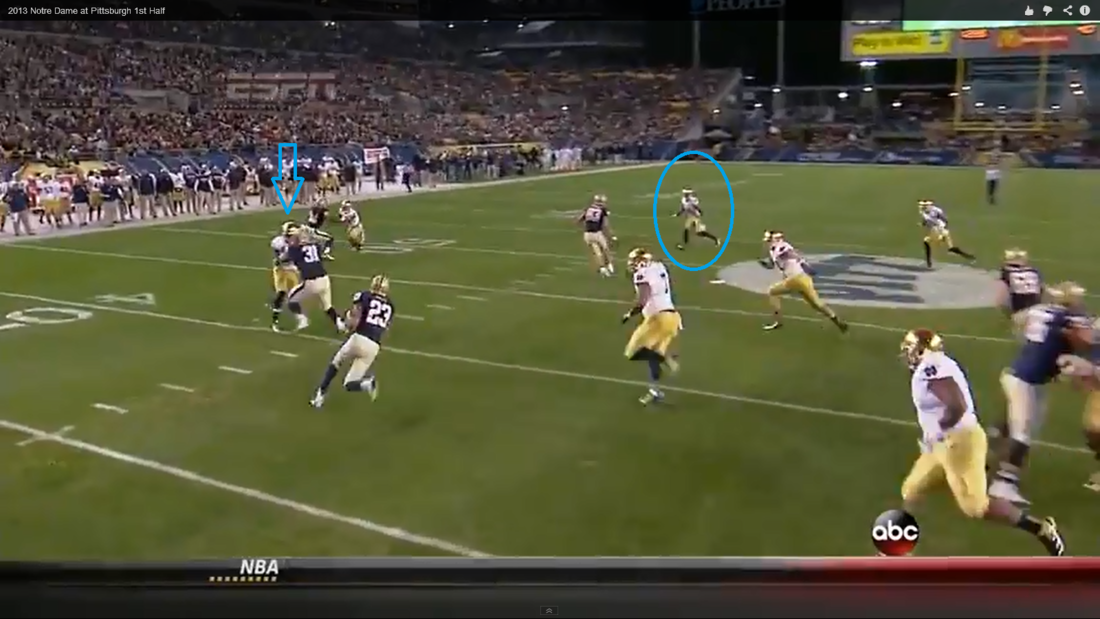 Jaylon Smith (blue arrow) isn't able to set the edge. Dan Fox is being mauled by the guard and Matthias Farley (blue circle)... well Matthias is about 12 yards away from the play and is decelerating. 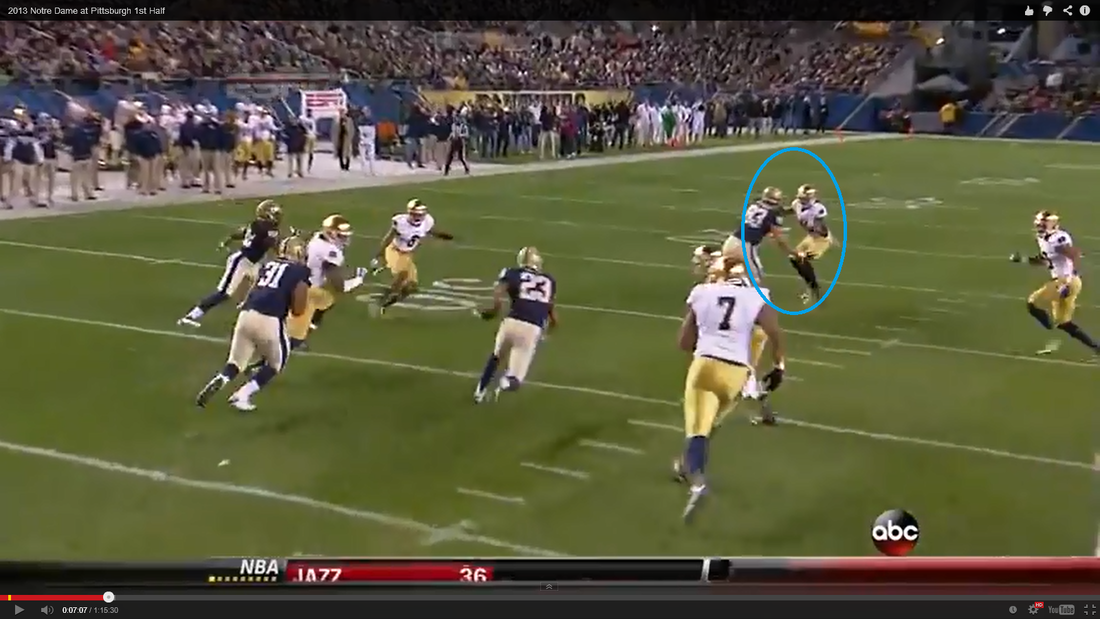 A fraction of a second later and Farley hasn't made much progress. Simply put, we need much better play from him. He is way too tentative. Totally unacceptable. 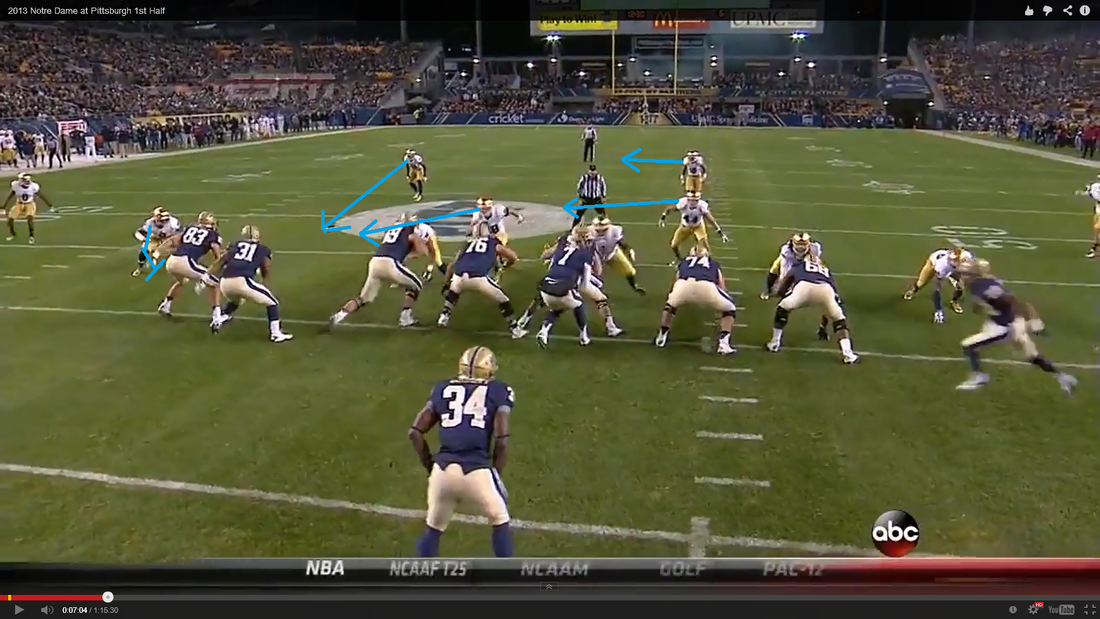 Here's what should have happened. Jaylon Smith should have done a better job setting the edge. This would have made it easier for the inside pursuit to get to the ball carrier. Next, Matthias Farley should have looked like he was shot out of a cannon attacking the line of scrimmage as soon as he read run. Dan Fox should have put the battle of the Somme impersonation on hold and actually flowed to the perimeter instead of running into the guard. The backside safety should have slow played it and pursued on a relatively flat angle acting as the last line of defense. Carlo should have checked the running back and then flowed over the top to make a play if the ball carrier somehow got past the first wave of defenders (which is actually what he did, except he was the first wave of defenders).

Once again this play illustrates many of the problems the Irish have had defending the run on the perimeter. Take a look at Burger's excellent review of the Navy game, you will see these same problems crop up. Tentative safety play, and poor pursuit from the inside lead to difficulties defending the perimeter. It's like ground hog day, we keep living this over and over again.

Here's the video so you can see it unfold at full speed.

These two plays early in the Pitt game highlight some real concerns with the Notre Dame defense. The Irish continue to have a difficult time adjusting to changes in formation, especially when they are blitzing. This creates a situation where Notre Dame is out numbered on the perimeter before the ball is snapped. As well, the blitzes that Notre Dame is using are predictable, poorly timed and relatively simple. This renders them largely ineffective. These schematic flaws magnify Notre Dame's personnel weaknesses. We have numerous injuries, our safeties are tentative and our inside linebackers aren't great athletes. When we put them in a bad position by getting outflanked and running ineffective blitzes, their weaknesses are amplified. Injuries aren't the coaches' fault, but the scheme is. Let's hope we can get some bodies back healthy for BYU and no matter who takes the field, let's hope the scheme gives them a better chance to be successful.