Freshman outside linebacker Jaylon Smith made some huge plays in the game against the Sun Devils, a game in which Notre Dame sorely needed the athletic presence on the edge to keep the Arizona State offensive attack in check. As Larz said, this is the type of game that Jaylon Smith was born for. Athleticism was sorely needed against the ASU speed attack, and he provided it in spades on Saturday.

So what did he show us that he is doing extremely well and what can he work on? Let's take a look into the film to see: 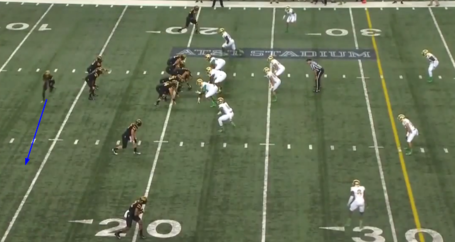 Here we see one of ASU's running backs motion to the weak side of the field. If this looks familiar, it's because OU used it to great effect against us last week. 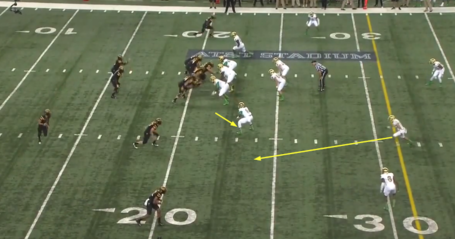 Just after the snap, we see that Jaylon Smith has backed up off the line and towards the sideline. Safety Austin Collinsworth has read the motion and is shooting towards the line to pressure the blockers.

After the catch is made, ASU's WRs shoot out to block for the back. #87 attempts to block Jaylon Smith. 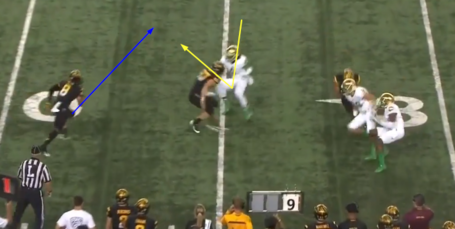 Following a cutback from the ball carrier, Jaylon shows an amazing cutback of his own to cut off the play. 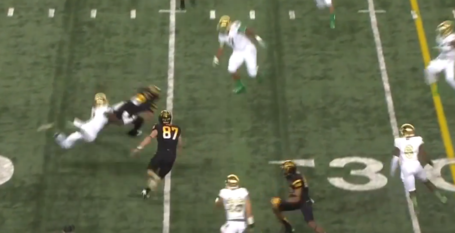 Just a great individual play to avoid the block and cutback with the ball carrier. He also finishes it off with a supremely athletic tackle near the line of scrimmage. He single handedly erased the horizontal stretch Arizona State was attempting to take advantage of, something his talent allows Bob Diaco to scheme around.

The next play we will take a look at is another supreme individual effort by Smith which limits ASU's ability to attack the ND defense horizontally. 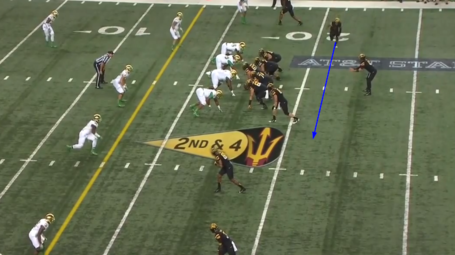 Prior to the snap, the Sun Devils' slot receiver begins his jet sweep motion towards Smith's side of the field.

The Sun Devils send two blockers at Smith, who has already started running full speed towards the line of scrimmage in order to set the edge against the jet sweep. 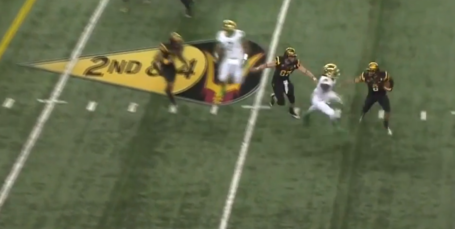 The two blockers each get a piece of Jaylon Smith, but he was able to fight through the blocks to meet the jet sweep in the backfield. GREAT play recognition and his speed made the blocks difficult to make, and his talent kept his balance through the chips to get to the back.

The next play we'll be able to see an area where Smith is still struggling to maintain his responsibility: 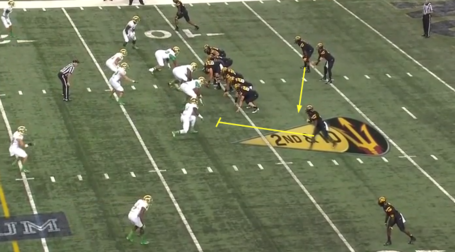 ASU is running a sweep play to the left, with two pulling guards. The Sun Devils' slot wide receiver will be making a crackback block here on Smith. On any run to his side of the field, his primary responsibility is to get upfield and set the edge, cutting off the RB and forcing him inside to his help. In the case of getting cracked, he can take the block on (if he sees it), or shooting upfield to try and beat the blocker to the ball. 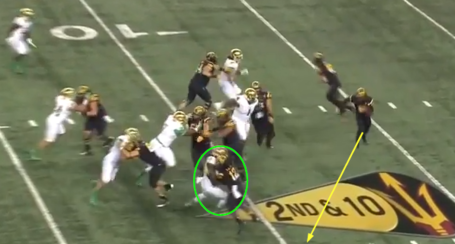 Here we see that Smith has taken neither approach, and has gotten cracked pretty effectively by the slot receiver. This is simply an awareness issue on Smith's part and is one of the things he needs to improve upon as Notre Dame moves along through the season.

Early in the season, Jaylon Smith looked like a freshman who was lost on many plays. As the season has worn on, he has picked up just enough to get really dangerous out there. He is showing flashes of what he may become more and more often, but he is still having some problems with play recognition and setting the edge on running plays.

The DOG position in this defense has some of the most complicated responsibilities in both pass and run coverages. The fact that a true freshman is able to step in and be as productive as Jaylon Smith is truly amazing, and a testament to his athletic prowess and ability to pick up the complex assignments required of the DOG position. We should all be extremely excited to watch him play for the next 4 years (please all 4 years).