Notre Dame and Navy: Why We Play, Part 1

The story of a desperate university, an incredible intervention, and a debt of gratitude that can never be repaid.

Share All sharing options for: Notre Dame and Navy: Why We Play, Part 1

In recent years, college football has seen an unprecedented shakeup in its traditional structures. Conferences have fluctuated wildly; previously-unimaginable partnerships have formed; and--perhaps most importantly--old rivalries have been disbanded in favor of new ones. Notre Dame has certainly not been immune to this phenomenon, either, as evidenced by the recent move to the ACC (you da man, Savvy Jack).

But as speculation about future schedules begin to rise, so too have worries about Notre Dame's all-important Strength of Schedule. Would they keep their traditional rivalries? Would their rankings suffer from being required to play mediocre ACC teams? And which opponents could be deemed "expendable"? In particular, one question keeps popping up: "Why don't we just drop Navy from the schedule?"

There are plenty of logical reasons to drop Navy from our schedule. So why haven't we?

I've also asked this question several times. After all, there are many logical reasons to swap out Navy for a tougher foe. Some include: "We have little to gain and a lot to lose"; "How can we drop Michigan but keep Navy??"; and by far the most common complaint, "How is it even a rivalry?? It's usually a lopsided win for us anyways!" All of these have merit to them--so much merit, in fact, that I decided to check it out for myself.

[Click here for the 2nd half of this 2-part series]

I wasn't sure what I would find out...but after a little research, a chat with ND legend Fr. Ted Hesburgh, and a lot of help from the friendly folks at the Notre Dame Archives and the Naval Academy Archives, it's safe to say I got a pretty solid answer. [To make things a bit more digestible, I'll split the story into the eras of 1927-1945 and 1945-present.]

Sit back and relax, folks--we're about to have ourselves a little history lesson about the longest continuous-running intersectional rivalry in college football.

I won't spend a whole lot of time on the very beginning, but the first meeting in this 87-year series between Notre Dame and Navy was in 1927 in Baltimore. Although Navy held a 6-0 halftime lead, they eventually succumbed to the Irish reserves; the final was a 19-6 Notre Dame victory. In a prophetic twist, ND's 1927 Season Review declared: "This was Notre Dame's first game with the Naval Academy, and Irish supporters are confident that the same cordial relations that have existed between the Army and Notre Dame will exist with the other branch of the service."

"No matter what the outcome, this game will serve to forge another link in a splendid relationship." -Rev. J. Hugh O'Donnell, C.S.C. (1940)

Throughout the first 13 years of the series, the two teams played in Baltimore, Cleveland, and South Bend. In 1930, Navy was also the opponent at the dedication game for the brand-new Notre Dame Stadium, which was also the game that inspired G.K. Chesterton to write his famous poem "The Arena" after attending it. By 1940 (at which point ND led the series 10-3), the two schools had already built up quite a relationship. It may have helped that ND's President from 1934-1940 was then-Rev. John F. O'Hara, C.S.C., who eventually became the Apostolic Delegate for the U.S. Military Forces. During the war, he even became the first Catholic bishop to be appointed to the Board of Visitors at the Naval Academy! 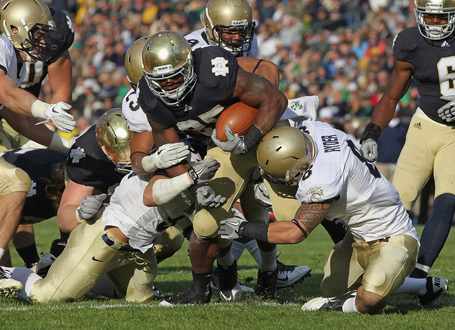 Prior to the 1940 game, then-ND President Rev. J. Hugh O'Donnell, C.S.C. was asked by the Baltimore Catholic Review about the importance of the game with Navy. His response, in part, read:

In many respects, the two schools are similar both in objectives and in the daily lives of the students. As a result, there has developed through the years an esteem for the Naval Academy which places this game high on our list of intersectional gridiron contests[...]Clean sportsmanship has always characterized students of both [Army and Navy], and we are honored that two of our best rivalries are with these splendid institutions. No matter what the outcome of [this weekend's game], it will serve to forge another link in a splendid relationship.

But as the Irish and the Midshipmen clashed on the field, a deadlier conflict was breaking out in Europe. At first, there was little concern among the 3,200 students living in the 14 dorms on campus. The only military presence to speak of was a small nearby Civilian Air Patrol training school for student-pilots (which was restricted to military two years later).

However, as the European conflict intensified and the United States grew increasingly worried, the University became more involved in the war effort. For the most part, this consisted of Engineering and Science faculty members helping with research and instruction. The last on-campus change in peacetime was the establishment of the Naval ROTC in the summer of 1941, a program that has endured to this day (and still provides much of the visible, concrete link between Navy and ND).

"If it wasn't for the Navy, we would've had to close within a year." -Fr. Theodore Hesburgh

As everyone knows, December 1941 changed the course of the nation, and its reverberations were felt even in South Bend. The all-male student body began leaving for the military in droves, and within a month an eerie silence settled over the once-bustling campus. The minuscule 750-man population was bad, but it was only one of the problems the University faced.

Frankly, it would be charitable to call ND's prewar endowment "mediocre"--it was downright bad. As donors began redirecting their funding to the war effort, schools nationwide suffered; in Notre Dame's case, it fell to three million dollars, which was among the smallest in the country for schools of its size. When I asked him how bad the situation was, Father Hesburgh (who was a young priest at the time) put it starkly: "We had a couple years with no income and a lot of expenses. If it wasn't for the Navy, we would've had to close within a year." 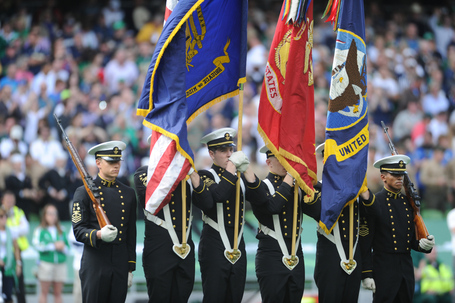 Thankfully for Notre Dame, help arrived not a moment too soon. Alerted to Notre Dame's dire financial situation by President O'Donnell's urgent request for aid, the War Department began a 5-year rescue effort that kept the University financially stable in return for using their facilities--a template that saved many other impoverished colleges across the country. I'll spare everyone most of the technical details, but here are the major milestones of the Navy's wartime resuscitation of Notre Dame:

Notre Dame and Navy are bound by something far stronger than a mere contract.

There are many more stories and stats to tell, but I will content myself with only a few more lines for today. At the conclusion of World War Two, the NROTC and the V-7 Midshipmen School stationed at Notre Dame produced 12,000 officers and officer candidates. Combined with the V-12 trainees and the regular alumni who entered the military through other means, Notre Dame gave the U.S. over 25,000 reserve Naval officers and ensigns during the war. But of all those military students and alumni, the most honored are these: the 331 who made the ultimate sacrifice, and their 1,200 fellow alumni who were wounded in World War Two--many of them products of both Notre Dame and the Navy. It is this solemn bond of shared blood, more than any contract or training course, that has forever sealed the friendship between Notre Dame and the Naval Academy.

Click here for Part 2, which includes an exclusive interview with Fr. Hesburgh, letters between the two schools, and the reflections of past and present ND and Navy officials on why we still play.