"Rees would be PERFECT for my Air Raid offense." --Mike Leach

Wow, you guys. I know that we pride ourselves on doing as little MATH as possible here at One Foot Down, but I gave in and decided to throw some stats together. Here are a few numerical observations from last week's historic TSW Article That Officially Started The Internet's Ridiculously Photogenic Cam McDaniel Craze:

Before we go any further, I want all of you awesome people to stop and give yourselves a round of applause for a job very, very well done--last week was proof that without you folks around, this site would be kind of super-lame.
Unfortunately, there can be only one winning caption...and with a TSW-record 32 rec's earned, fishoutofwater won it in style by proposing an important change to the rulebook: 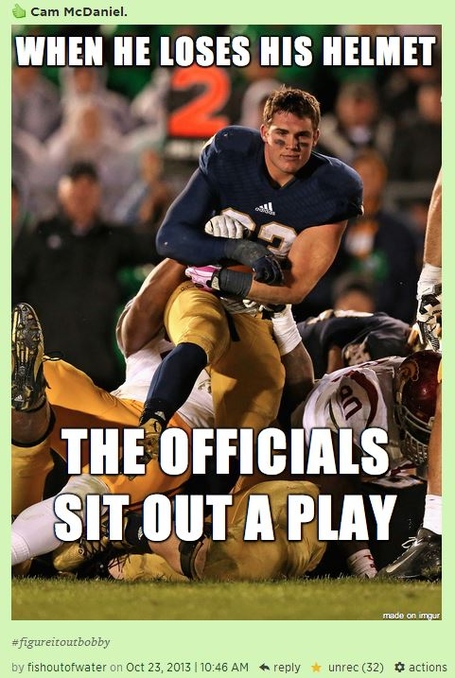 I believe Fish is our first Queen of the Commentariat (like she wasn't already!), but there can be only one crown...sorry, No-Longer-King occtipus. LONG LIVE THE QUEEN!

Boy, it'll be tough to top last week's outing, eh? Don't take it too badly if you have a letdown week for this one--just think of it as "taking one for the team" so that the real team doesn't have their own letdown! This week's TSW entry gives us a classic pregame handshake photo between Brian Kelly and Air Force HC Troy Calhoun. So, it's just a plain old handshake, nothing fancy about it. Yep. Absolutely nothing caption-worthy going on here. As boring as boring can be. Can't think of a single humorous caption that could be put on a handshake photo. PROVE ME WRONG, COMMENTARIAT.

Caption aweigh away, vote with gold stars, and see you in the comments! BEAT NAVY!