Pork in any form is a staple at tailgates across the country. This week's installment of Football Food offers one take on pulled pork.

So here's the thing-this isn't a recipe for BBQ. This does not incorporate tedious hours of tending a smoker. This is a pretty simple (and foolproof) method for making pulled pork in the oven. A crockpot would also work. Could you go ahead and use a smoker instead of the oven? Sure. It's your time, not mine.

BBQ is probably the most regional food in the US. Depending on location, you have pork vs. beef, wet vs. dry, and tomato vs. vinegar and mustard based sauces. BBQ just refers to the cooking method (low temperatures, wet heat, long cooking times).

Based on that, this will probably be the second most controversial post this fall-not sure anything can top "Whipping the guac."

I made two pork shoulders (~16 lbs worth based on the packages) because this was for my son's birthday party last weekend. We had about 30 people and had a ton left over.

On to the steps: 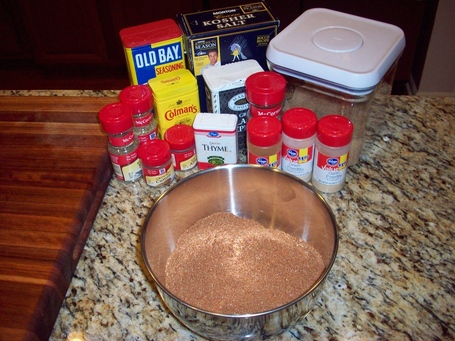 Honestly, this step is optional if you are making this in the oven or crock pot. Seriously. Purists will argue with me on that, but it is my opinion, and I am sticking to it.

¼ cup chili powder (use whatever heat level you prefer)

You can add or subtract whatever items you would like from the list. I thought this one had way too much cumin for my liking. Also, the Old Bay was a last minute addition-mainly a as shout out to the OFD Lax Bros. Old Bay is seriously versatile though. I recommend you keep some around.

Mix all of the spices up in a bowl or air-tight container. This makes a lot of rub, so plan on having plenty left over.

There are a few directions to go here on the cut of pork. I went with the picnic shoulder (bone-in), but the Boston butt would also work well here. The shoulder roast comes with a nice layer of fat on one side (pork fat rules!) and needs some trimming on the opposite side. Removing any extra fat on the bottom of the roast will save separating it when you go to shred/chop/pull the pork apart after it is done cooking. 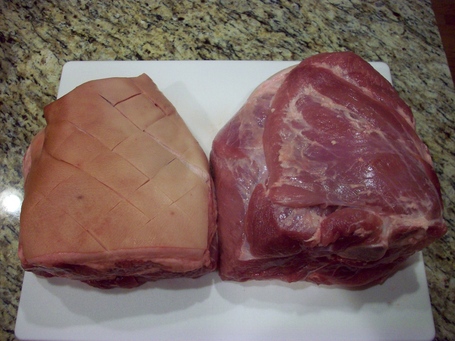 Once you are done with the trimming, pat the meat dry and apply the rub (you know, by rubbing it) on all sides. I scored the fat side in a crisscross pattern to help some of the spices add a little flavor to the top side of the meat. Don't feel like you need to do this-it's totally optional. 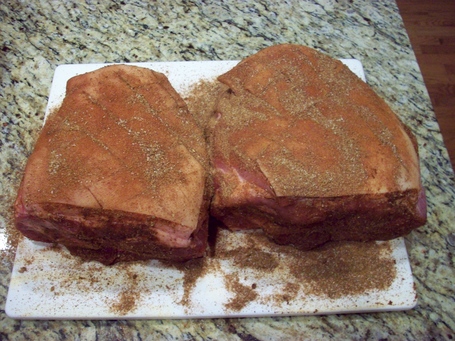 After applying the rub, I loaded the pork into a heavy duty Dutch oven fat side up. Many will use a disposable foil pan. Anything will work as long as you can seal it up with a lid or aluminum foil. I then added a few cups of water, some quartered onions and garlic cloves. You can use just about any kind of cooking liquid you like-it really doesn't matter. I have seen/read people using apple (or other fruit) juice, soda (Coke, Dr. Pepper, root beer), or stock. The important thing is to add a little liquid due to the long cooking time.

I then got out the trusty meat thermometer and put it into the thickest part of the roast, careful not to have it touching the bone (it will lead to false readings). Then just put the top on the Dutch oven, throw it into the oven at 250°F and let it go until the thermometer hits 200°F. It took 5.5 hours for the two roasts. If you are only cooking one, it should be around 4 hours or so. 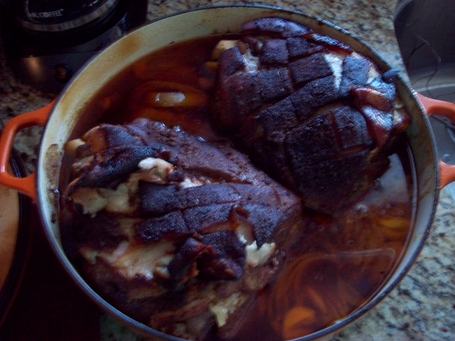 Ummm, this is pretty self-explanatory. Remove the pork from your cooking vessel of choice, separate the fat and bones, and shred the pork using a pair of forks. We kept ours in the crock pot with a little of the pan juice for the party. 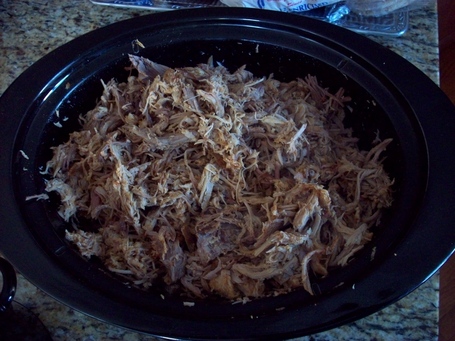 There are plenty of directions to go on this one. I prefer a tomato-based sauce that is a little bit sweet and has some nice spice. You can go grab your favorite from the store, or whip up a little something while you are waiting for the pork to cook. 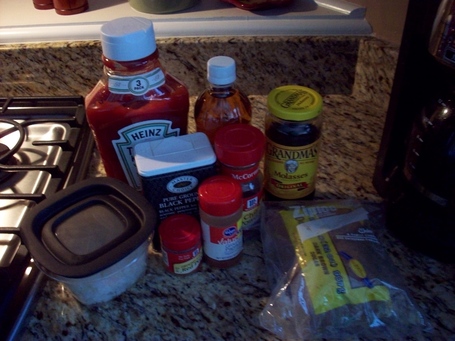 Here is a recipe that I made over the weekend that went over well:

Salt and pepper to taste

Heat the oil in a sauce pan over low heat and cook the onions until they are translucent. Add the remaining ingredients and simmer for 15 min. I used an immersion blender to smooth out the onions and then added to a squirt bottle for easy application. Feel free to add/subtract/change as like.

Now, bring on the variations. Let's hear what you have to say OFD readers.