OFD Films: The Devil is in the Details - Arizona State Preview

This week we take a look at the high powered Arizona State offense.

Share All sharing options for: OFD Films: The Devil is in the Details - Arizona State Preview

We lost last week. It sucks. No time for small talk or semi-humorous Canadian references. Let's get to work and take a look at the Arizona State offense.

In preparation for this post I've watched more than 100 plays by the ASU offense and have charted 72 of them. The bulk of these plays were against Wisconsin and Stanford. Here are some general observations and trends.

I'm not going to break down every single play that I charted, that would result in a post that would be long even by Murtaugh's standards. Instead I'll break down a single play that incorporates many of the key elements of the Sun Devil offensive philosophy. Although this is only one play, the concepts embedded in this play are present throughout Arizona State's playbook and will certainly be part of the game plan Saturday night against the Irish. 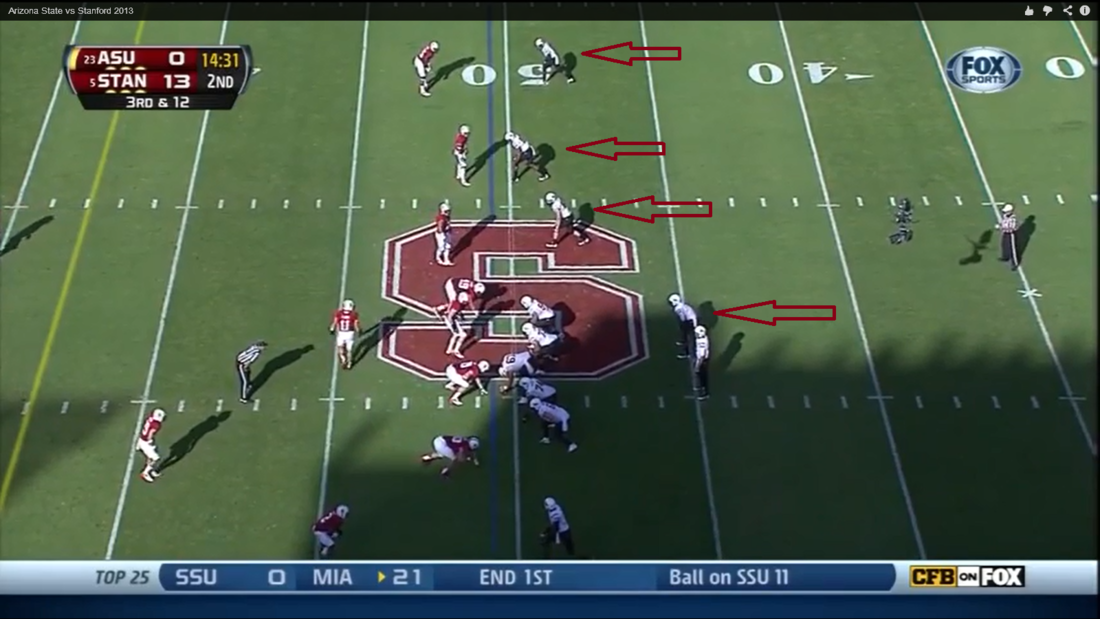 Overload formations are one of the foundational elements of the Arizona State offense. In this case Arizona State has three receivers and a running back (who is also a very good receiver) to the right side of the formation to create the overload. Overloading one side of a formation is a common tactic used by spread offenses. The idea is to force the defense to adjust to the formation pre-snap. This allows the quarterback to survey what the defense is doing and then attack whichever match up favours his team. 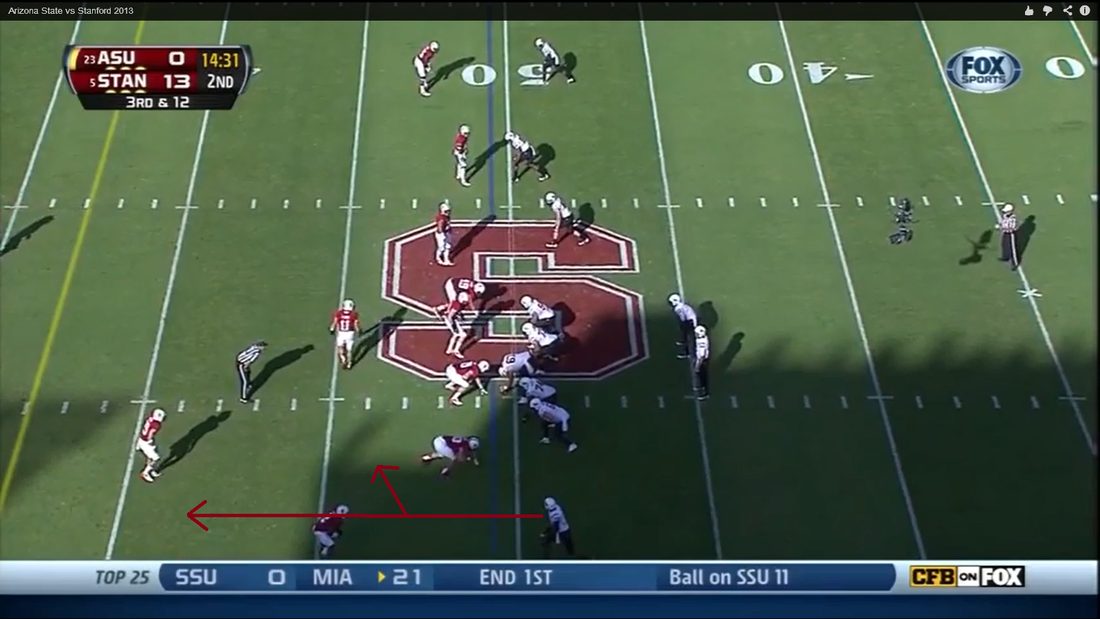 Arizona State designs plays to have multiple options off a single look. For this play the first option we'll look at is a pass to the Iso side (where the single receiver is). Typically this lone receiver will run some sort of vertical pattern if the corner is in tight or an inside pattern (usually a slant) if the corner is off. These patterns can be called pre-snap or can occur as a sight adjustment post-snap. Initially, I thought Notre Dame would try to get Bennett Jackson on the Iso side of the formation whenever possible and leave him alone in man coverage. After watching Jackson struggle at times in single coverage against Oklahoma the Irish may have to do something different.

Arizona State uses multiple formations where a receiver, tight end or running back are isolated on one side of the formation. This is something the Irish will have to contend with all night. Our defenders will have to win these one on one match ups on a regular basis on if we hope to be successful against the Sun Devils. 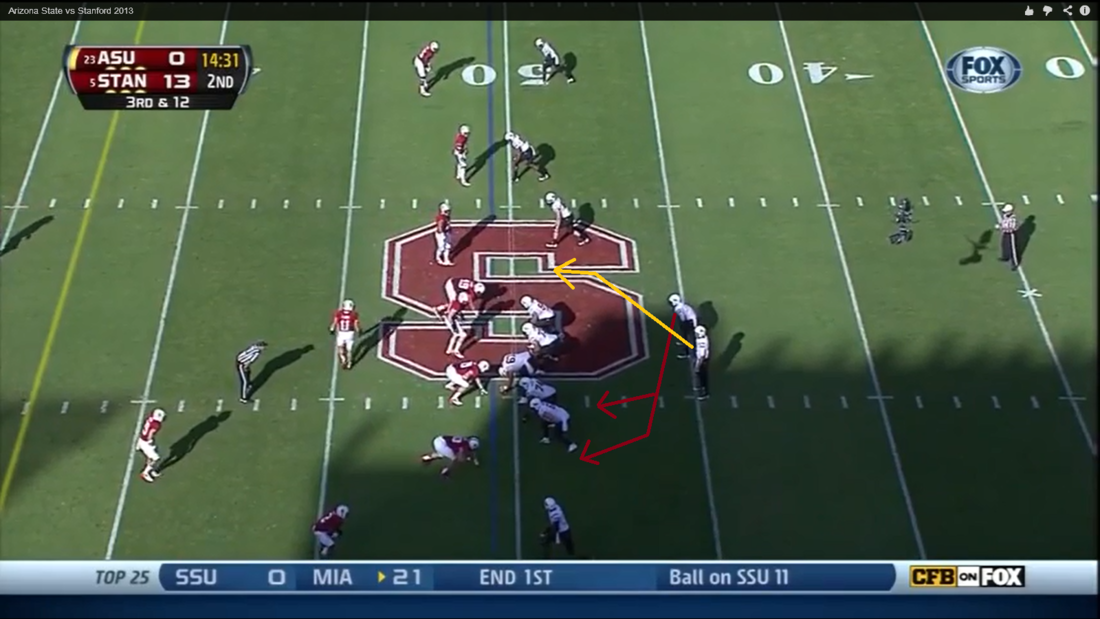 Arizona State can also run effectively out of this formation. If the defense sends too many players to the overload side, the Sun Devils will simply run the ball to the opposite side on the zone read. Additionally, quarterback Taylor Kelly averaged 20 yards a carry against USC so the Irish will have to account for him as a runner. 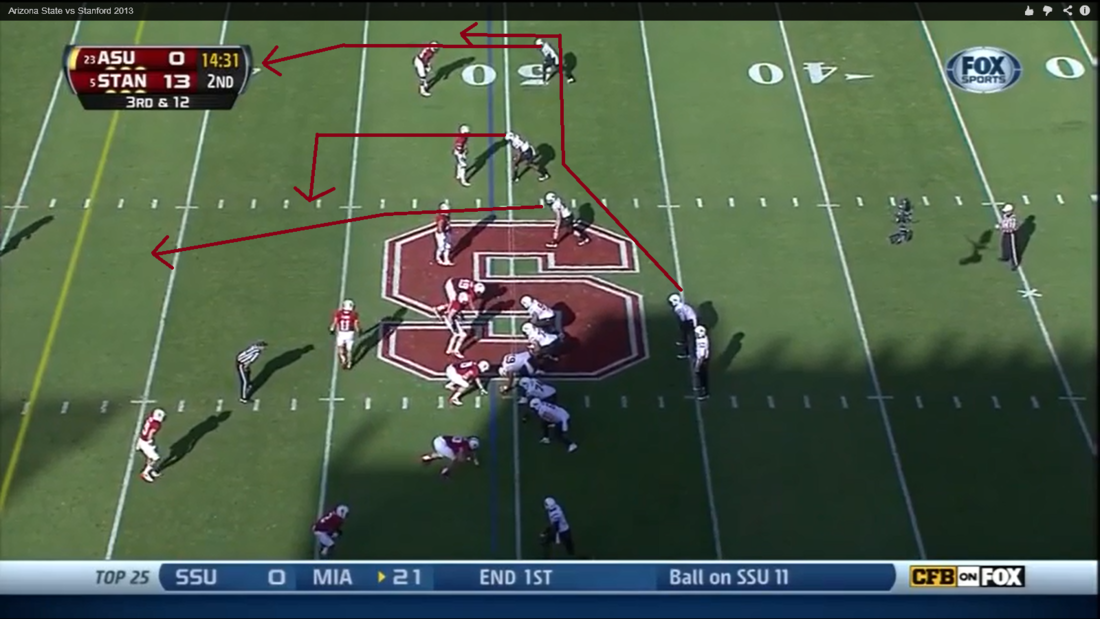 The overload side is where head coach Todd Graham would really like to attack out of this formation. ASU has two vertical patterns and two underneath patterns on this side of the formation so the quarterback has viable passing options regardless of the type of coverage the defense runs. What Arizona State really likes to do from this set is get the ball in the hands of running back Marion Grice. If ASU reads zone coverage pre-snap, they will throw a swing pass to Grice and let him make plays in space. If they see man coverage they will take Grice on a wheel route against a linebacker all day. Neither of these scenarios is a good match up for the Fighting Irish defense.

All the Options Together 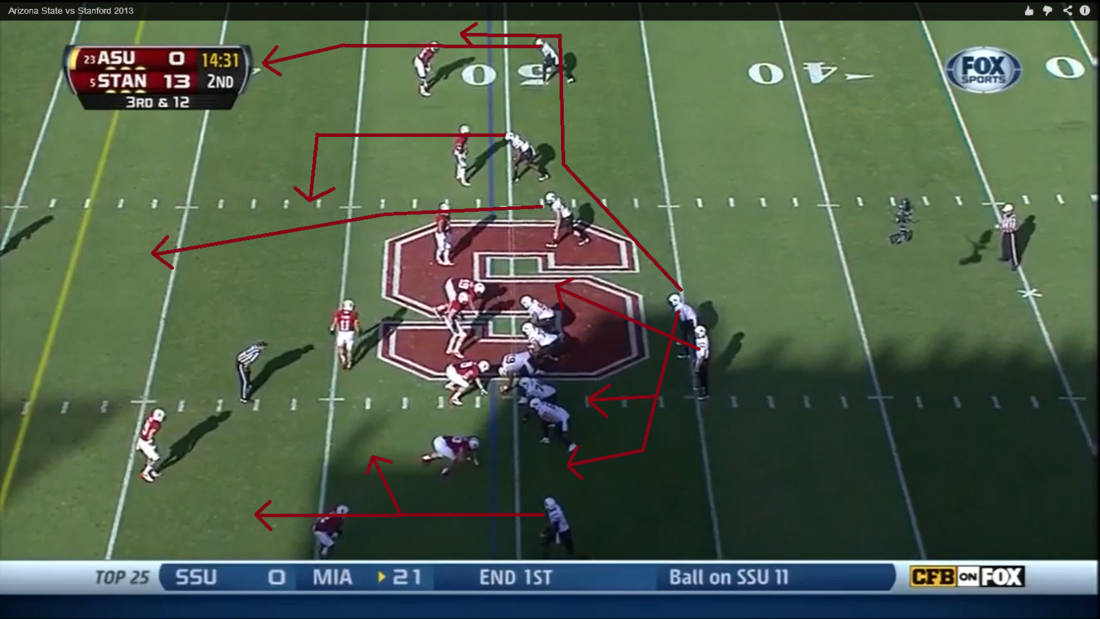 Uhh yeah.... as you can see, there are a lot of potential options out of this one play. The majority of the plays I charted are designed like this. They have multiple options to exploit any potential vulnerabilities in the defensive alignment.

The Crosser and the Running Back Release 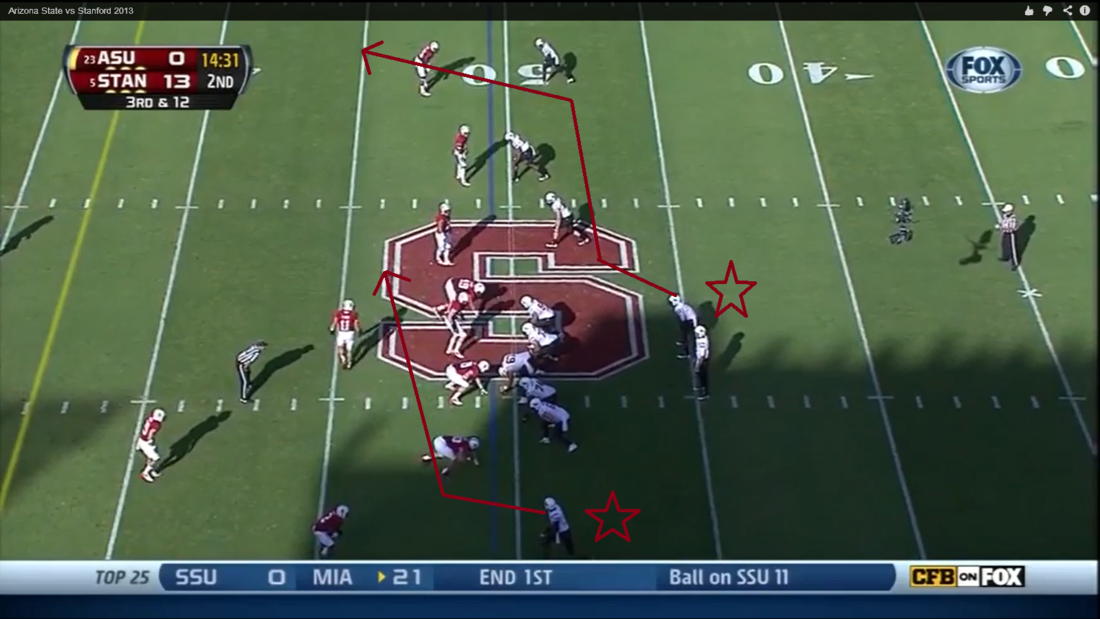 I wanted to highlight these two patterns because I think they represent critical elements of the Arizona State game plan. The Sun Devils love to throw the shallow crosser and to the running back out of the back field. They do this often and out of multiple sets. The unfortunate reality is that these two plays are kryptonite for the Notre Dame defense. We have struggled mightily dealing with shallow crossing patterns all year (see pburns excellent breakdown of these struggles against Oklahoma). As well, I am not confident our linebacking corps is ready to cover a talented running back one on one in man coverage or tackle him consistently in space. By the way, ASU running back Marion Grice has 22 catches so far this season, DaVaris Daniels has 21. If Notre Dame doesn't figure out a way to stop these two plays, it will be a long night in Arlington Texas.

What Does Notre Dame Need To Do To Slow ASU Down?

This is going to be a tough match up for the Irish defense. With all due respect to Oklahoma, I believe this is the best offense the Irish have faced this year (and likely the best offense they will face all year). Notre Dame is going to need a pre-game exorcism to remove the demons that have plagued them through the first 4 games of the year. We're a Catholic institution, we must have access to an exorcist, right?