The Irish head to Arlington, Texas to take on Arizona State in the annual Shamrock Series game.

Here is the One Foot Down preview of the third ever meeting with Arizona State.

This is the amount of receptions from Arizona State running backs D.J. Foster and Marion Grice over the past 17 games dating back to the beginning of 2012. This Sun Devils offense throws the ball to the running backs a whole lot. This year, each back has 22 receptions a piece while Grice leads the team with 4 touchdown receptions. Last year both of these running backs accounted for almost 29% of the teams receptions and this year that numbers has spiked to an incredible 40%.

This is the number of rushing attempts from quarterback Taylor Kelly since the start of 2012. This season he's run the ball 27 times for 124 yards. He's not a huge threat to score (just 1 rushing touchdown) but he's been consistently good for 4 yards a rush over the past two seasons.

This is the number of consecutive games that ASU has scored at least 28 points. Their 42-28 loss to Stanford was the low water mark for the team since their 38-17 loss to USC back on November 10, 2011. In 17 games under Todd Graham the Sun Devils have scored at least 20 points in 16 games. 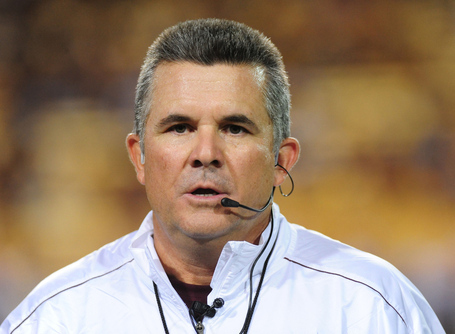 Heading into this season Arizona State was looking to replace two senior wideouts and JUCO transfer Jaelen Strong has stepped up into the void this fall. The Philadelphia native was one of the top junior college prospects for 2013 and currently leads the Sun Devils in receptions (31) and receiving yards (433). No other receiver for Arizona State has more than 5 catches this season.

Kelly is a redshirt junior who wasn't favored to win the quarterback position in Todd Graham's first season at Arizona State, but he won the job anyway and hasn't looked back since. Most would say Kelly is the best quarterback the Irish will see this season, and he's certainly one of the most dynamic. For his career he's thrown for 4,440 yards at 65.5% accuracy to go with 40 touchdowns and just 14 interceptions. As mentioned above, he can also run the ball with 589 career rushing yards.

The fifth-year senior is coming off a consensus All-American season in 2012 that saw him put up gaudy stats with 63 tackles, 23.5 tackles for loss, and 13 sacks. However, this season hasn't gone as well as hoped after Sutton passed up a high draft pick in the NFL Draft. There have been some opinions that he's put on some bad weight, he got banged up against Wisconsin, and heads into this weekend with just 13 tackles and 1 sack.

Notre Dame's defense was one of the best in school history last season in not giving up big plays. In 13 games in 2012 the Irish only gave up 10 plays of 30+ yards good for a tie with Oregon for second nationally. This season they've already given up 7 plays of 30+ yards in just 5 games.

This will be a huge concern for Notre Dame on Saturday night as the Sun Devils are one of the most explosive offenses in the country. Through just 4 games Arizona State has racked up 33 plays of 20+ yards with only Oregon, Florida State, and Maryland gaining more such plays with the same games played. And keep in mind the Sun Devils have already played Wisconsin, Stanford, and USC.

You can rest assured Arizona State is going to test this weakness on the Notre Dame defense just like Oklahoma did with their short passing game. Running backs D.J. Foster and Marion Grice will get the ball from the backfield and in the slot in order to attack the Irish defense.

It's the kryptonite for every defense (cut to Saban nodding angrily) and the Irish have struggled containing some of the mobile quarterbacks they've faced so far this season. Adding up the rushing of Temple's Reilly, Michigan's Gardner, and both Oklahoma quarterbacks and Notre Dame has given up 230 rushing yards on 39 carries.

Taylor Kelly might not be the huge running threat that Devin Gardner but he's dangerous enough to get at least 4 yards a pop and he's going against a defense that is giving up almost 6 yards per rush to mobile quarterbacks this season.

Arizona State has kept the same lineup on the offensive through all 4 games this season. Anchoring the left side is fifth-year senior Evan Finkenberg (6-4, 298) who comes into this weekend with 38 career starts. He's a lot like Zach Martin in that he doesn't have prototypical size at tackle but he's a very smart and productive player.

On the right side is redshirt sophomore Vi Teofilo (6-3, 302) who plays at guard after seeing a few starts there last season. Rounding out the line at right tackle is redshirt junior Tyler Sulka (6-5, 289) who had 2 starts in his career before this season.

Coming into this season Arizona State returned all of their starting defensive linemen for their 3-4 scheme but have been force to make some changes in recent weeks.

However, the Sun Devils may be without the services of sophomore nose tackle Jaxon Hood (6-0, 301) who is coming off a freshman All-American season in 2012 but was injured against Stanford and missed the USC game. If ASU is without Hood expect them to kick Conway inside with Coleman getting his starting end spot back.

Their defensive line depth also took a hit with the injury to senior Junior Onyeali (6-0, 240) who is out for the season after totaling 6 sacks last year. Other players who could see action against Notre Dame include senior Jake Sheffield (6-3, 270), junior Marcus Hardison (6-5, 290) and redshirt sophomore Mo Latu (6-3, 380).

My confidence for a victory in this game is pretty low.

First, Notre Dame will likely need to employ an offensive strategy that the coaching staff hasn't proven it will stick with for four quarters. The insistence on so many empty-sets and making Tommy Rees throw down field has not only befuddled and enraged Irish fans, but now it's making outsiders scratch their heads too.

Arizona State is giving up 192 yards per game on the ground (93rd nationally) and that's with holding Sacramento State to 51 yards on 31 carries. In their previous 3 games against Wisconsin, Stanford, and USC the Sun Devils have surrendered 718 yards at 6.08 per carry and 9 touchdowns. Granted, those are 3 good/great rushing attacks but each of them gained at least 200 yards against Arizona State.

The Sun Devils have decent size at linebacker but they aren't very big up front on their line. Not only are they being gashed on the ground but ASU isn't as disruptive on defense as they were last year. In short, this doesn't look to be a very good defense and Notre Dame should really run the heck out of the ball and stay patient because I don't know if the Irish can stop the Sun Devil offense when they are on the field.

This Irish defense is built to stop the likes of Michigan State and if Arizona State isn't all the way on the other end of the spectrum they aren't far from it. So Todd Graham's offense is built to give a defense like Notre Dame's all kinds of fits: up-tempo, quick passing game, attack the edges, mobile quarterback. This is not good news for an Irish defense that hasn't played well this year and will face ASU on the turf in Arlington.

Arizona State is averaging 44.3 points per game, 358 passing yards per game, and 505 total yards per game. The only thing they're not doing very well is running the ball (85th nationally and just 4.0 yards per carry) but they've also played very good run defenses too. Plus, you know when they say those short passes in the spread offense are equal to runs? Well, both Grice (109 yards from scrimmage per game) and Foster (85 yards per game) are being productive even if they aren't tearing it up on the ground.

Notre Dame not only has to control the clock on offense and run the ball with a lot of success but also finish most drives with touchdowns. On defense, the Irish should do well against the run and desperately need to turn in a good performance defending the short passing game.

Out of the 10 things Notre Dame hasn't done well this season they'll need to do 7 or 8 of those things very well to win against Arizona State. I'm not very confident this is going to happen.

The Sun Devils have the better quarterback, their offense is more explosive, and they've been injected with a lot of JUCO recruits to give them some physically developed talent. Graham's stocked ASU with 25 JUCO's, 11 of which are having an impact this season, and 6 of which are starting.

I didn't like this matchup back in the pre-season and I like it less after seeing both teams play. Going into the bye week at 3-3 should be super fun!