Last week Cam McDaniel, the most photogenic football player in history, took the internet by storm. The OFD community had a great time paying tribute to Cam and his helmetless performance during the USC game. Click here if you are the only person on the internet who hasn't seen the photo. This week we'll put the helmet back on Cam (sorry ladies) and take a look at how he ran the ball when he had all of his protective equipment on. 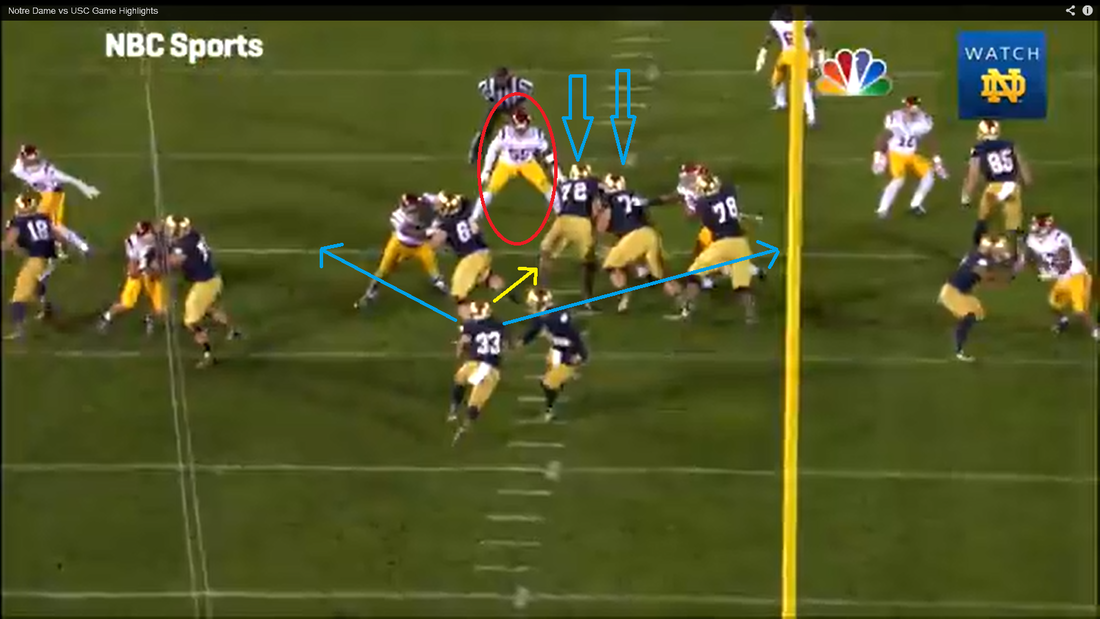 Notre Dame started this play in the pistol formation, we pick up the action a fraction of a second after the snap. There are two pretty obvious holes for Cam McDaniel (# 33) to choose from (blue directional arrows). As a ball carrier when you see an obvious running lane, your instinct is to get to it as quickly as possible. In a zone blocking scheme this is the wrong thing to do. If Cam follows either of the blue directional arrows right now, the effectiveness of the play will be drastically reduced. Instead, he must follow the yellow arrow towards the double team of Nick Martin (# 72) and Christian Lombard (# 74). This is called pressing the hole. The idea is to pull the linebacker Lamar Dawson (# 55) (red circle) towards the double team of Martin and Lombard (large blue arrows). If McDaniel cuts to the perimeter too early, the linebacker will simply scrape outside and Martin will have virtually no chance of getting off the double team to make the block. The ball carrier must be extremely patient and set up his blocks by pulling second level defenders towards the line of scrimmage before making a cut to the perimeter. 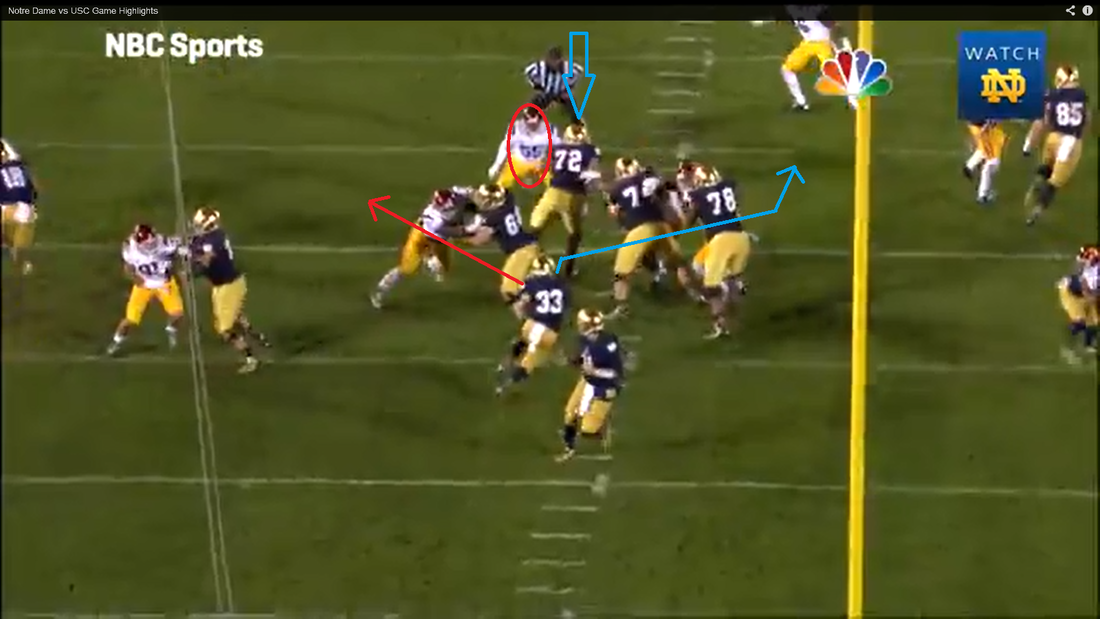 Nick Martin (blue arrow) is coming off the block and is about to engage the linebacker (red circle). While it appears McDaniel could go left or right, the correct choice is to follow the blue directional arrow to the right. If he follows the red arrow to the left, the USC linebacker is in excellent position to make the tackle (the defensive tackle that Chris Watt # 66 is blocking would also be in good position). By following the blue arrow, McDaniel augments the positional advantage center Nick Martin has on the linebacker. 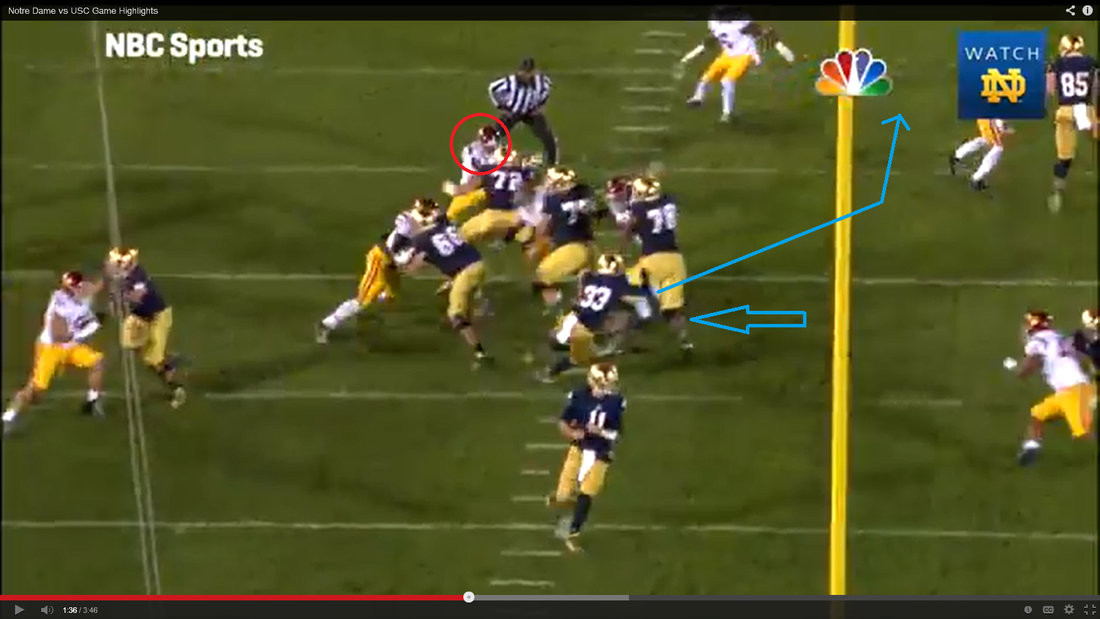 McDaniel is in the process of making a cut to the outside. As you can see, he is very close to offensive tackle Ronnie Stanley (# 78) when he makes his move. This highlights a critical element in zone blocking. Running backs must learn to wait until the last possible second to make their cut. In this case, waiting to make the cut forced the circled linebacker to continue towards the line of scrimmage due to the threat of inside run. This slowed his ability to get to the perimeter and allowed Nick Martin to get into good position to make a block.

This play provides a great example of why many observers feel that Cam McDaniel is such a good fit for the Notre Dame offense. He understands how to run the ball in a zone blocking scheme. Not every running back can remain patient and make good decisions with 11 large, angry men, running towards them. Check out the video to see the play at full speed. Note that at the end of the run the announcer says that McDaniel grinds his way across the 40.

We all know that Cam McDaniel is a plucky grinder who knows how to run in this scheme. Of course, his limited athletic ability means that he is destined to be a role player who will take up carries until the more talented players on the depth chart figure things out and pass him by. Everyone knows that, right? 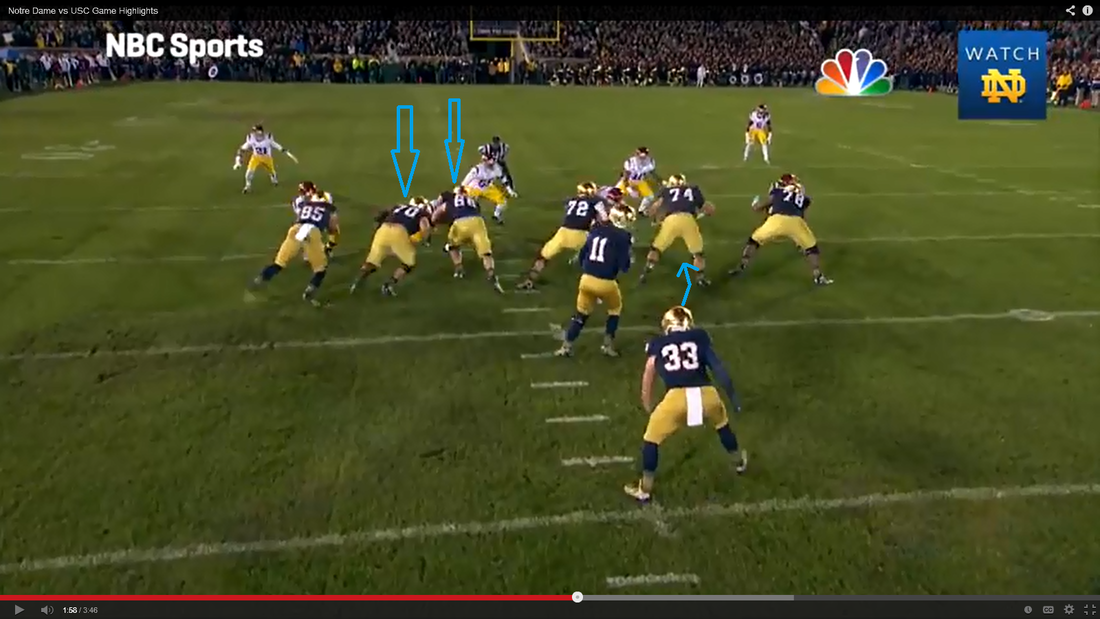 Pistol formation, zone blocking: this time McDaniel will look to work off the double team of Zack Martin (# 70) and Chris Watt (# 66). 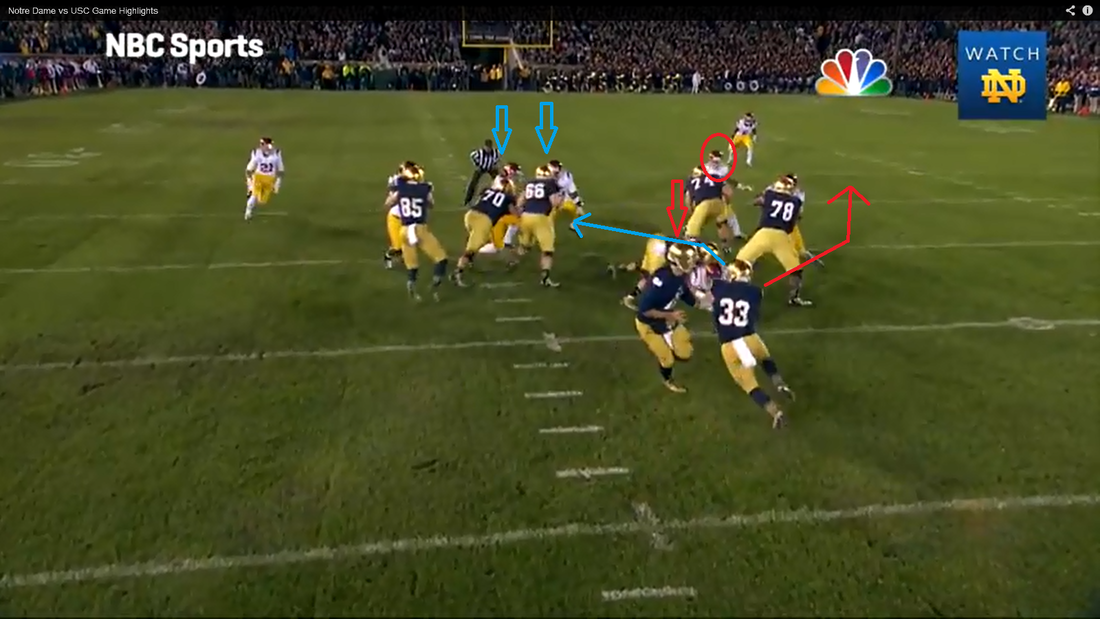 Again Cam is faced with two potential choices: follow the red directional arrow or follow the blue directional arrow. The red arrow is the wrong choice for a couple of reasons. First, the nose was able to get penetration and although Nick Martin has neutralized him (red arrow), this penetration would make it difficult for McDaniel to press the hole to that side. As well, the circled linebacker is shaded to the outside on Christian Lombard (# 74), putting him in a good position to make a play on the perimeter. Therefore, McDaniel will need to follow the blue directional arrow to move towards the blocks of Martin and Watt and make a cut from there. 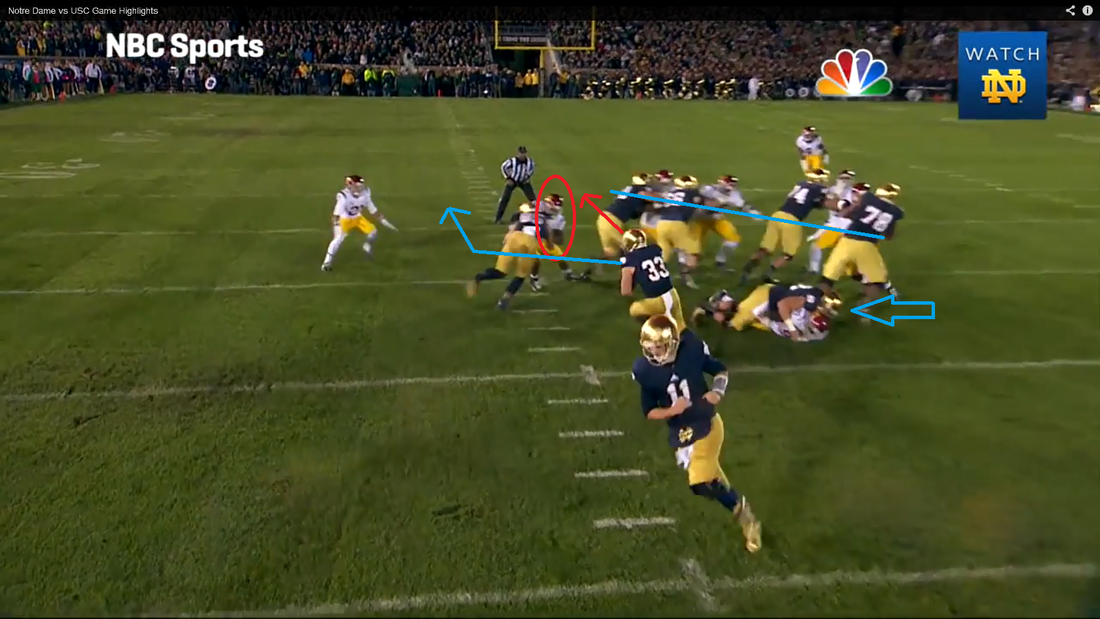 Like a pack of wild grizzlies the Notre Dame offensive line is absolutely mauling USC (and yes I know that grizzlies don't typically travel in packs and most grizzlies are wild so calling them wild is somewhat redundant. Even so, I couldn't resist making that statement because I love me a good old fashioned bear metaphor mixed with a little hyperbole!). Again, McDaniel is faced with a choice. Try to hit the seam between the block of Zack Martin and Troy Niklas (# 85) or bounce it to the outside. Neither choice is overly appealing as USC seems to have the back side of this play pretty well defended. 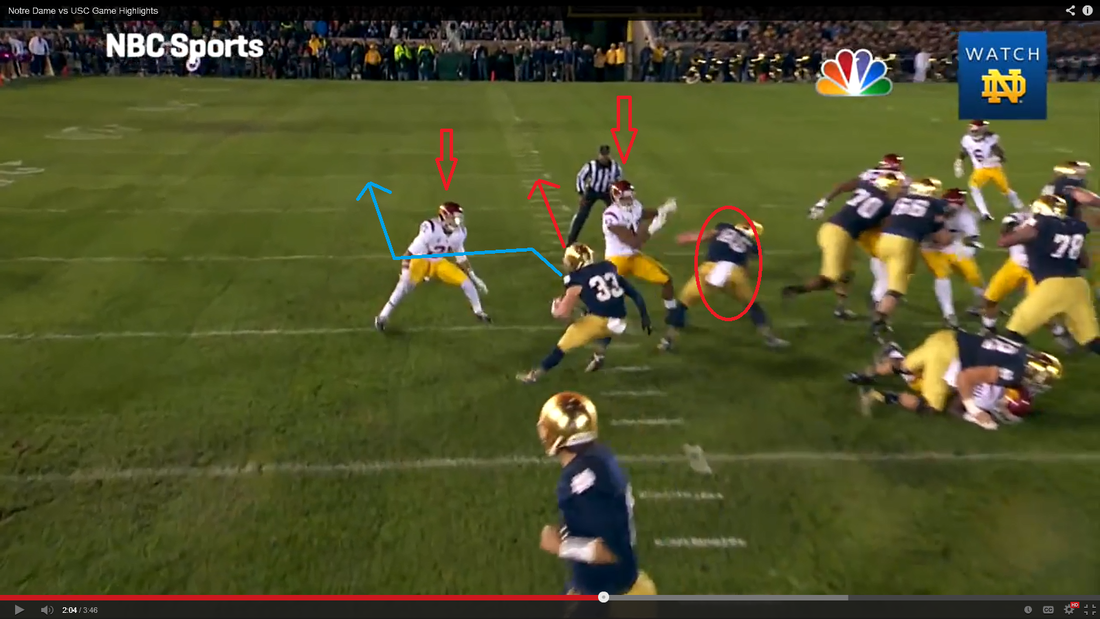 Oh Cam, why did you make a cut to the outside? You're a plucky little grinder who doesn't have the athletic ability to compete on the perimeter, especially against the type of athletes USC has. To make matters worse, Niklas has lost his block and now McDaniel has two defenders to deal with. Fortunately, Cam realizes his mistake and like a true grinder he is going to stick his foot in the ground, follow the red directional arrow and salvage a few positive yards. 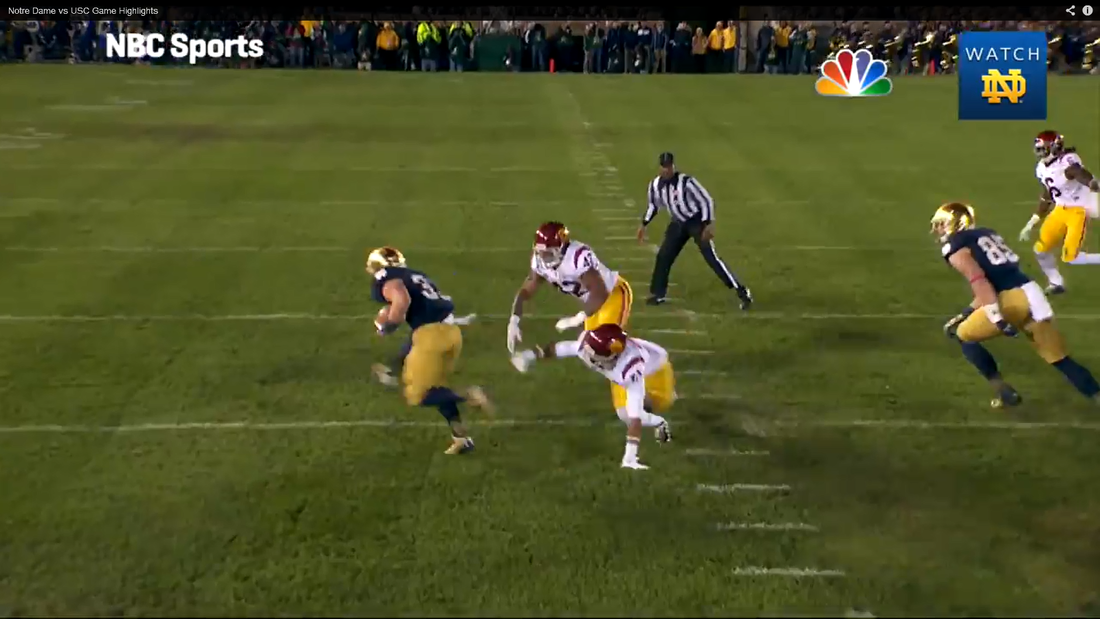 What the....? Yes that's right, Cam McDaniel is an athlete and he just made two USC defenders look foolish in open space.

I'll let the video do the talking. This is a pretty good move for a guy who isn't athletic enough to be the top running back at Notre Dame.

It's time to acknowledge that Cam McDaniel is more than a pretty face and more than a plucky grinder who fits well in the system. Cam McDaniel is a very good running back. He is consistent, dependable, tough, and makes great decisions. He's also a good athlete who is fully capable of making other good athletes look foolish in space. Full disclosure, I wrote this article before the Air Force game. As I sit here post Air Force, I can say I saw nothing in Colorado Springs that would dissuade me from stating that Cam McDaniel is currently the best running back on the Irish roster.