Everything you ever wanted to know about the option but were too afraid to ask.

Notre Dame is playing a military academy this Saturday, so that can mean only one thing: option football. Though there's plenty of option in today's modern offenses, there's something old school about the traditional option offenses that I really like.

Though the option offense looks simple on the surface, there's a lot of subtlety to them, and in preparation for Notre Dame's upcoming games against Air Force and Navy, let's talk about what these teams do so you understand what the heck is going on.

Let's start with the basics. This is the flexbone:

Paul Johnson, the head coach at Georgia Tech and the former head coach at Navy, refers to this formation simply as "spread." But to avoid confusion we'll stick with the more common term, "flexbone."

The two slot backs are called A-backs in this offense. The deep-set back - usually called the fullback - is known as the B-back. The left wide receiver is the X and the right receiver is the Z. The differentiation between X and Z is only important in the passing game, as their blocks are determined by which direction a play is going.

The flexbone formation isn't a new innovation; wishbone teams frequently "broke the bone" by lining up halfbacks closer to line of scrimmage. But the flexbone spreads the defense out and threatens a four-wide passing attack on every play.

What's the difference between Air Force and Navy?

Both teams run the option, but their systems are very different.

Paul Johnson has moved on to Georgia Teach, but his "spread option" offense lives on at the Naval Academy. Unlike the old wishbone offenses with their lead blockers and pulling linemen, Navy's spread option is pure finesse. Navy does not use a tight end and the fullback (B-back) is rarely used as a lead blocker. Navy lines up almost exclusively in the flexbone, though they've been dabbling in the pistol. Philosophically, they want to spread teams from sideline to sideline and then pick apart the defense with option plays.

Air Force's option offense is a branch of Fisher DeBerry's wishbone offense. Unlike Navy, Air Force takes more of a power running approach to their option game. They use the same base plays as Navy and Georgia Tech, but they like to use multiple formations as well. They might line up in the flexbone: 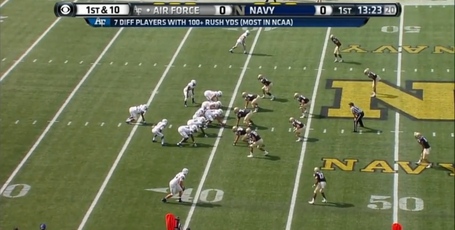 Or in the I-formation: 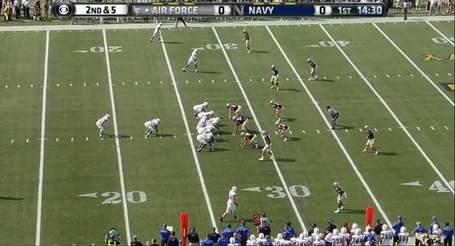 Or in the shotgun: 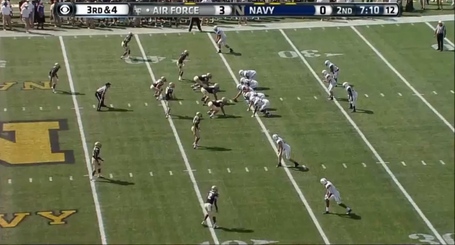 Or in a "broken bone" formation: 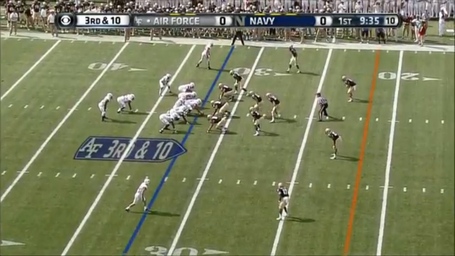 They'll run the option from all of those formations, but they'll also run iso or power O. Unlike Navy, Air Force wants to run downhill while still sticking with their bread-and-butter option plays. If Navy is like Oregon with its spread principles, then Air Force is like Stanford with its battering ram approach.

The mechanics of option plays are determined by what's known as "the count." But before we discuss that, we need some background info.

The gaps between offensive linemen are identified with letters. The gap between the center and guard is the A gap, between the guard and tackle is the B gap, and between the tackle and tight end is the C gap.

Now back to the count. The count begins with the first player "touching" the playside tackle and progresses outward. #1 is typically a 4i-, 4-, or 5-tech player. #2 is the player next to or stacked behind #1, usually an outside linebacker. The defender outside or behind #2 is, of course, #3. This is usually a safety.

Identifying the count properly before the play starts is vital for running the base plays in the option offenses.

Time to crack open the playbook...

Now let's look at the base plays in the option offense. Since both Navy and Air Force use the flexbone quite a bit, we'll focus on how they're run out of the flexbone.

The inside veer is the play of every option team. When sportscasters talk about the triple option, this is the play they are referring to.

Let's break it down to the very beginning. 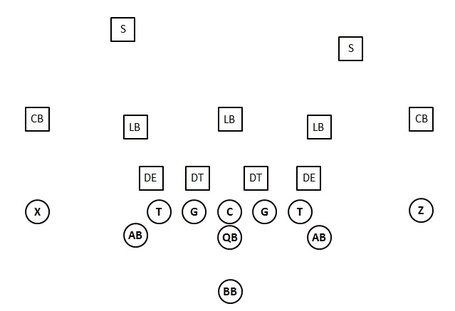 Here we have a flexbone formation against an imaginary 4-3 defense. The playcall is an inside veer to the right. Let's start by identifying the count. 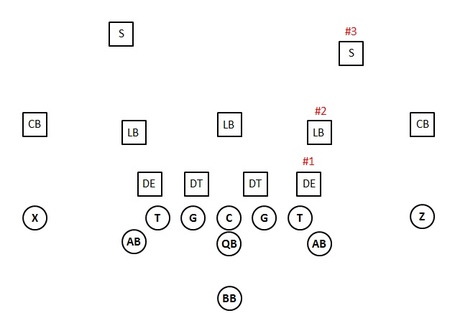 Before the play even starts, the backside A-back goes in tail motion. His aiming point is the B-back. The snap is timed so that the ball is hiked when the A-back is two steps into his motion. Once he clears the B-back, he turns upfield to potentially take a pitch from the quarterback. 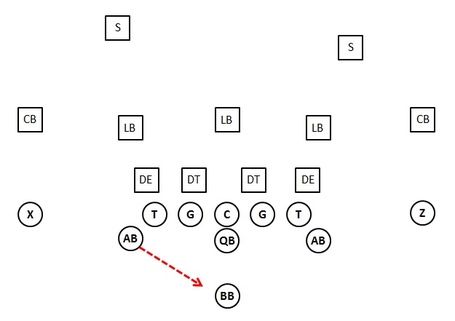 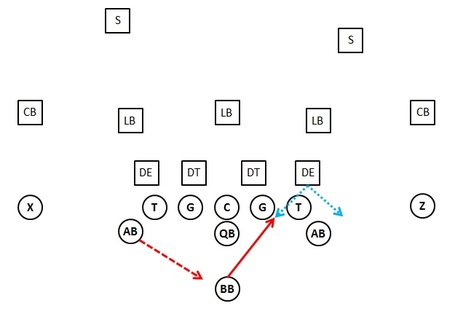 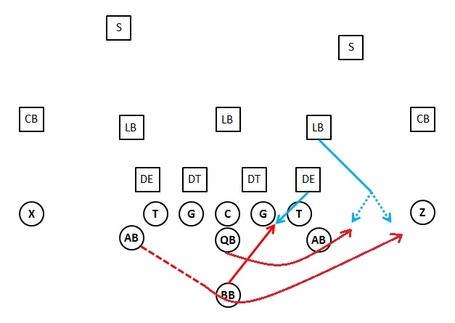 Here's a video of the veer triple option in action. Try to identify the count and watch the quarterback make his reads. Also notice how the middle linebacker got swallowed up right away and the nice block the A-back threw on the safety (#3), allowing the A-back to get the edge on the pitch.

The speed option is a double option. The goal is to race to the outside while the defense is worrying about an inside handoff.

The play itself is very simple. The quarterback can option off of either #1 or #2, depending on the playcall. He takes the snap and races outside with an A-back coming around off of tail motion. If the optioned defender takes him, he pitches the ball. If not, he keeps it. This play is good if the offense has figured out the defense's assignments on defense and wants to put the ball in the hands of either the QB or a particular A-back. The playside A-back and B-back act as lead blockers. 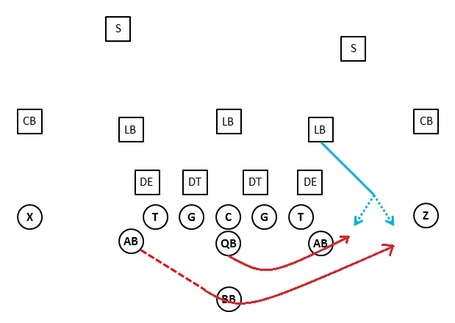 Here's an example of Georgia Tech running the speed option. They option #1, who is standing at the end of the line. He covers the pitch and the quarterback cuts up the field for a first down.

The midline can be either a double option or a triple option. The big difference between the midline and the veer is that the midline options an interior defensive linemen, usually a 3- or 4i-tech. 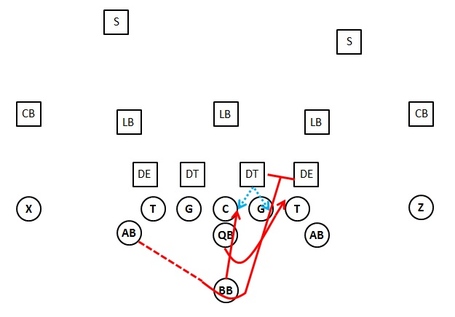 Notice that on the veer, the B-back runs through the B gap. On the midline, he's running through the A gap.

TV commentators usually mistake this play for a QB keeper because they typically don't know what they're talking about a defensive tackle's first instinct is to go after the ball carrier, so the quarterback rarely hands the ball off on this play.

On a midline triple option, if the QB pulls the ball, he'll read the next defensive lineman and either pitch or keep the ball. The A-back in tail motion runs a normal pitch route instead of cutting up through the hole. This play looks very similar to the veer triple option, but all of the reads are shifted inside. 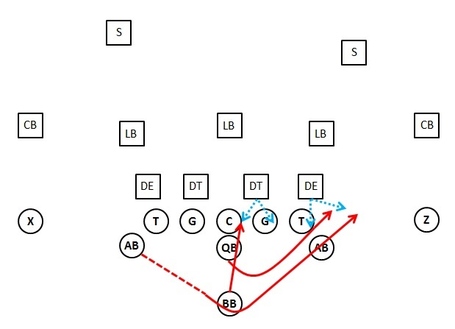 Here's a video of the midline double option. Watch at how a lane opens up for the quarterback and the leading A-back ends up not blocking anybody.

The rocket toss is my favorite play in the option offense. Most defenses focus on controlling the middle of the field and taking away dive plays, so a quick-hitting toss to the outside can be very hard to defend.

Paul Johnson says this play is essentially a screen because, well, it pretty much is. 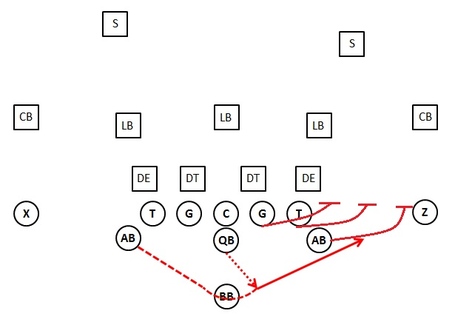 Like every other play, the backside A-back goes in tail motion, the QB pitches the ball to him, and the A-back runs until he gets the edge and turns up field. Everyone else heads in his direction and blocks anyone that gets in the way.

Watch the rocket toss in action. The A-back follows his blocks out to the edge and then picks his way through for a big gain.

How Do You Stop The Option? Assignment Football, Right?

This is the common refrain from sports broadcasters. "It's all about assignment football," they say. "Who has the fullback, who has the quarterback, and who has the running back?" Any breakdown on defense can be attributed to someone "not keeping their assignment."

In a sense this is true. A defense does need someone to cover every phase of the triple option. But to say that the defense just has to assign one player to each phase and then trot out onto the field is too simplistic. It ignores the fact that the coaches on the other sideline are not - one would hope - idiots. If you do the same thing over and over again, the coaches on offense will make a few tweaks and start gashing the defense. For proof, look here and here.

The biggest kryptonite to option offenses is strong defensive line play. If Louis Nix is bulldozing through the line and disrupting the mess between the quarterback and B-back, that throws the whole timing of the play off. If there is penetration into the backfield that the QB has to avoid, it will give the rest of the defense time to get to the edge.

Another key is to mix up the look the defense gives the offense. One common change-up defenses like to throw out is to have the defensive end and outside linebacker (#1 and #2 to the offense) switch assignments. The end now takes the QB while the linebacker takes the dive. With any luck, the QB will see the end widen and hand the ball off, only to have the B-back get hit at the line by the linebacker.

Paul Johnson refers to this as an "easy stunt" because it's so easy to counter: the QB just reads the linebacker instead of the end. But if this gets mixed in 5-10 times a game it can maybe create some big plays on defense.

Notre Dame has been rather vanilla on defense against the academies since the disaster against Navy in 2010, but I think that's mostly due to the talent of players like Louis Nix, Stephon Tuitt, and Manti Te'o.

Te'o was a big component of Bob Diaco's defense against the academies. The defense was asked to string option plays out to the sideline and it was Te'o's job to clean them up. But he was also responsible for covering the middle of the field on pass plays. With Manti currently playing for the Chargers it will be interesting to see who is asked to play his old role or if Diaco will change up the defensive scheme.