"It's just not fair--why can't WE have a schematic advantage in ridiculously photogenic running backs?" --Ed Orgeron

Twelve years. That's how long it's been since we beat USC at home--yes, way back in the halcyon days of Bob Davie and Carlyle Holiday. So let's keep that in mind when we're tempted to panic over a 14-10 victory, shall we?

Last week's Punterrific TSW was a bit of a curveball, as we took the opportunity to cleanse our palates before the USC game with a non-ND picture from the bye week. Interpretations of the Cal punter's "unique" form included a new marketing strategy for Head-On (applied directly to the forehead, natch), Adam Sandler in disguise, and attempted espionage/sabotage by Jim Mora. At the end of the day, however, veteran commenter occtipus elected to go with the modest play-by-play [click for full]:

Congrats, occtipus! In addition to receiving this week's title of King of the Commentariat, you'll also receive a complementary roster spot as ND's 4th-string QB. If Tommy and Andrew get hurt and Zaire's redshirt stays on, then may God have mercy on your soul. (If it makes you feel better, you'd probably be featured on OFD the following week!)

In addition to the QB drama and the defense impersonating a brick wall in the second half, our running backs also had a solid game against USC. One particularly epic moment occurred when Run-CMC plowed into the teeth of the Trojan defense and lost his helmet, evoking that immortal image from the Purdue game captured by Matt Cashore and our own ndmspaint. Now, losing one's helmet in the midst of a maelstrom of angry 300-pound armored giants would cause most human beings to react with terror, dumbfounded shock, and/or loud wailing and grinding of teeth. Cam's reaction? 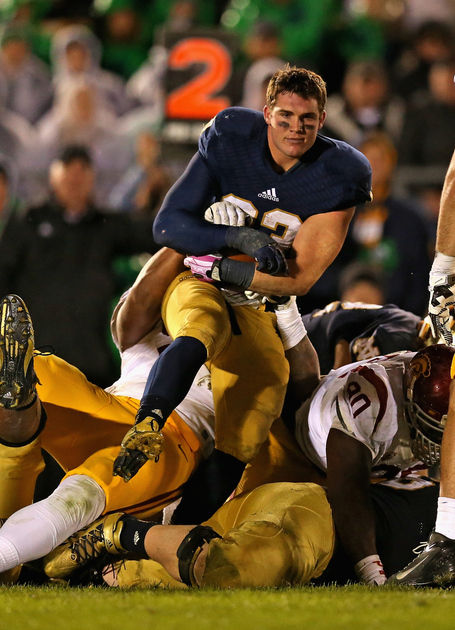 That, ladies and gentlemen, is the face of a man who simply doesn't give two Fig Things about USC.

Although we pick our photo on Sunday and try to keep it under wraps, TSW almost began two days early when Cam's magnificence (unsurprisingly) caught the approving eye of ESPN's Notre Dame guru Matt Fortuna (hi Matt!) and several other top-notch ND folks on Monday:

TSW? RT @TJamesNDI I sense a meme being born. MT @Matt_Fortuna An outstanding pic of ND's Cam McDaniel being the man http://t.co/9s6EFZSiyf

To all you Twitter folks who so graciously waited two whole days to submit your ideas: thank you! Here's a quick recap of the TSW ground rules for everyone:

See you all in the comments--and BEAT AIR FORCE!