Notre Dame came out in an uptempo spread offense to start the game against USC. Among other things, this is something many of us here at OFD have been clamoring for, well, since Brian Kelly has taken over as head coach. It seemed especially useful when used by an offense that needs to be simpler than usual (given physical limitations). Also for some of us at OFD (mostly yours truly), we believe it is the direction that all college football offenses are going to tend towards, since it provides so many advantages over traditionally-paced (slow) offenses.

The usual types of teams that are running hurry-up-no-huddle (HUNH) offenses have mobile quarterbacks, and are almost exclusively spread teams. There's plenty of positives to running the HUNH: preventing the defense from substituting (taking advantage of matchups), wearing the defense out, catching defenses in bad formations. However, these all pale in comparison to the biggest advantage (in my opinion) of the HUNH offense -- taking away a defense's ability to call complicated coverages/blitzes or make checks at the line of scrimmage.

There are plenty of reasons why the Irish had yet to use the hurry up, but Brian Kelly put them most succinctly in his post game press conference:

"...I thought we got some really good things out of [the tempo]. We had been trying to settle on a few plays that we really felt like Tommy could handle well without putting us in a position where we had to check anything. I didn't want to check anything with him, and I didn't want to be in a position where he had to pull it. And that's not easy."

Ideally, if you are going to run a HUNH offense, you are going to rely on plays that have multiple options: pass plays that have man beating and zone beating concepts to opposite sides of the field, packaged plays that give a run/pass option based on a pre-snap read, and the now ubiquitous spread option packages. If you have a QB who can do all 3, and any combination of the above (see: Marcus Mariota), you'll have a much easier time selecting 4 or 5 packaged plays to run over and over and over until you've broken the game open.

When you are trying to do the same with a QB who can't "pull it" as Coach Kelly puts it, you have to be more selective in your playcalling. The best thing about the spread option (in most cases, specifically the zone read) is that if it's run correctly, the playcall is never wrong. This is essential to the HUNH offense, because it allows the QB to call it and haul it, and simply make the read the defense gives him, with no need to make a check or look back to the sideline for a playcall after lining up (the "meerkat" offense).

If the QB can't be a run threat, but there is a running play called, and the defense stacks the playside of the line - the QB needs to make a check, wasting time and letting the defense potentially get a new call.

Now that you know why the HUNH without a mobile QB is a little more difficult to run, let's take a look at how Brian Kelly and Tom Rees (are we in agreement that he became Tom on Saturday?) did it out of the gate against the Trojans anyway. Let's look at only the "call it and haul it" plays that were called (the first 4 plays of the game), and how each one fits into the modified HUNH approach: 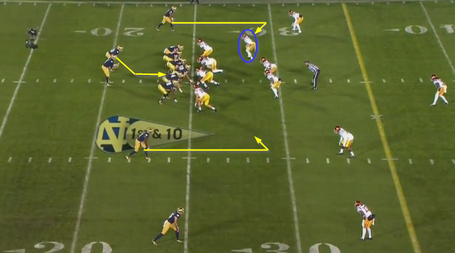 The packaged play is one of the cornerstones of the modern HUNH attack. It allows for a run or a pass, all in the same play design. One of the original packaged plays was the draw/stick concept, where an inside receiver would run a 5 yard hitch, and if the outside linebacker stayed in coverage, the QB would hand the ball off to the running back on a delay.

The play above is a modified version of the draw/stick concept, with a slightly easier presnap read. Simply put, if the linebackers crowd the LOS, the QB will pull the ball and throw to one of the curl routes. If there are good numbers on the line, the QB will hand the ball off.

In this case, Rees has good numbers to run - and in addition, the safeties and CBs are MILES from the line of scrimmage. Hand the ball off and take what the defense gives you. 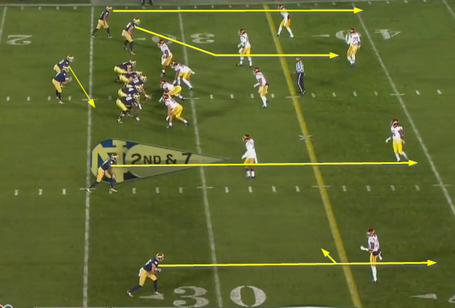 If there is one play that Brian Kelly had to take to a deserted island with him, it would be 4 verticals. With the right WR reads, it will always have a receiver in a good spot to make a play, and if the coverage breaks right, you'll be looking at a long touchdown pass.

For this play, I think Brian Kelly and Chuck Martin were looking to take a shot at the end zone, after the previous run play. There was a non-zero chance that USC would have seen the first run play and in the hectic tempo checked to something more run-oriented.

As it was, the USC safeties appear to be in the same package as before, giving plenty of cushion. Rees finds a one on one matchup with TJ Jones on the outside and gives him a chance to go up and get the ball. 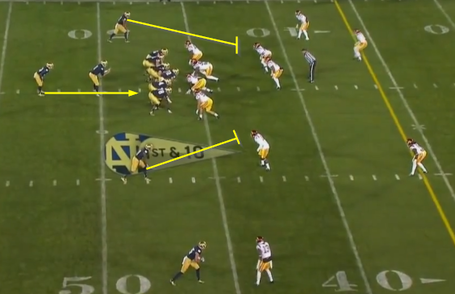 Here is a prime example of why going quickly will get you into good positions. USC is in the same alignment as the previous play with two high safeties. With one of the linebackers bumped out to cover Davaris Daniels in the slot (he played in the slot quite a bit on Saturday), this left only 6 men in the box.

The Irish ran an inside zone from the pistol right up the gut. It was a guaranteed 3 yards, and had some potential for more with the right blocks. 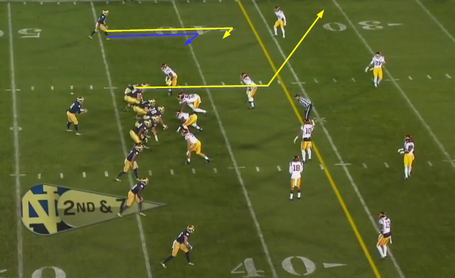 The final play Brian Kelly included in his hurry up package was an extremely well designed play, given what had been run up to that point.

Notre Dame set up with Cam McDaniel wide to one side of the formation, and the 3 wide receivers to the other. In most cases, a defense will be able to react to the personnel should they want to play man coverage or have better matchups across the field, but given the hurry up aspect of the play, they simply had to react. You can see in the screenshot (immediately before the play), there's 5 members of the USC defense that aren't even looking at the line of scrimmage.

The play design is simple, and Troy Niklas and Cam McDaniel will run a smash concept. I believe the 3 wide receivers are running a flood pattern to the near side of the field.

Again, USC's defensive backs are 10+ yards off of the line of scrimmage, and McDaniel is wide open on the curl route. He runs it a bit deep, and the throw misses him. It's important to note this fact, since if the pass was completed, Notre Dame is in 3rd and short and can continue to run the hurry up. As it was, it was an incompletion, and Notre Dame had to make some personnel changes and a more in depth playcall to try and get the 3rd and 7.

I really hope we see some more hurry up mixed in to Notre Dame's offense, and while I don't think we'll see a ton of it this year, it is something I think will serve us well moving forward. For now, it will serve as a good curveball, and we have worked out a few plays that we feel comfortable running at warp speed with Rees at the wheel. It never hurts to have an extra tool or two in your bag of tricks that opponents have to gameplan for.