The current coaching ranks in college football look very different than 10 years ago. Several high profile jobs may open up soon to change the landscape even further.

Share All sharing options for: USC & The Shifting Coaching Landscape

In case you've been living under a rock Notre Dame's biggest rival just fired their head coach. After 3+ years in Los Angeles with a 28-15 record Lane Kiffin was let go as the coach of Southern California. One of the first things I ever wrote here at One Foot Down was back in June 2010 on USC's sanctions and how I believed a down Trojan football program wasn't good for Notre Dame football.

I still feel that way. As an era arrives when strength of schedule will become a factor in playoff qualification it remains imperative that Notre Dame's biggest rival is a strong program and we're getting primetime matchups as often as possible.

As USC begins to go through the process of hiring a new coach there has also been a lot of discussions throughout the country how we're seeing a shifting landscape in the sport. Gone are the never-ending tenures of Bobby Bowden and Joe Paterno and the game has embraced a win-now mentality like never before.

As of this writing 83 current head coaches (excluding USC & UConn at the moment) have been at their current program for 4 years or less. This is a shocking amount of new blood at new places.

Only 10 of the 23 HCs hired prior to the 2010 season are currently in the same position.

We're not too far away from the current longest tenured list being shaken up as well.

A lot of coaches are very safe at their current jobs from this list. Still, Beamer seems to be on the downside of his career (he's 66 and hasn't won a conference title since 2010), Bill Snyder is 73 and is coaching a team that is struggling, DeLoss Dodds is reportedly stepping down as Texas AD so you can kiss Mack Brown goodbye after this season, Ferentz might not make it another couple years at Iowa, and Grobe's days appeared numbered as do Pinkel's if the Tigers struggle down the stretch.

1997 might as well be 1972 with all the change we've seen and will continue to see. This off-season could be led by blue bloods like Texas and Nebraska in addition to the now vacant USC position.

Before I get into the rumored Trojan head coaching candidates, let's look at some issues staring athletic director Pat Haden in the face.

A) Do you pick a coach who runs a spread offense?

The USC faithful are struggling with this question as many want to modernize but others a wary of such a major change in philosophy from their roots. Sure, this question has hit many teams over the past 10 to 15 years but USC has really been a cradle of pro-style quarterbacks. If you pick a spread coach he'd inherit roster completely devoid of the type of signal-caller he'd want and someone like last year's No. 1 QB Max Browne would probably think about transferring.

B) Is offense or defense more of a priority?

Tough question, right? Typically USC has done well enough on offense (except for this season) and it's been the defense that's played poorly throughout the Kiffin era. Where does the focus go?

C) Will college experience be a necessity?

We all know the risks of hiring someone from the NFL without any college experience.

D) How important is 'fitting with the West Coast" going to be?

Haden might look to some candidates with USC roots but someone who can handle the Hollywood lights and deal with the Los Angeles media will probably be more important.

This isn't happening. Maaaaaybe he thinks about the Texas job but he's going to be very hard to pry away from Baylor. He's a life-long Texan who probably doesn't fit Hollywood all that well. 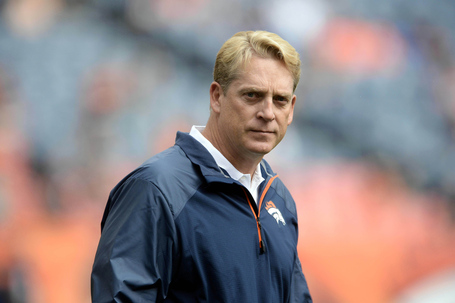 Del Rio has been in USC head coach rumors for a number of years. Personally, if you want USC to miss on a hire I think he's your guy. He's a former Trojan linebacker, he just looks like he'd coach at USC, and as of Monday he had the best odds from Vegas to be Haden's choice. However, he has zero college experience so he'd be a very risky hire. But if they look across town at Jim Mora? Also, the Broncos will likely be in a deep playoff run well into 2014 so that's something to keep in mind but plenty of sources are claiming Del Rio wants the job.

He'd be a bit of a flyer but at least he has a lot of experience in the college ranks. He hasn't been a head coach for very long but in the time he has been DeRuyter has done a lot of good things. He could be coming off an undefeated season when USC decides on a new coach too.

He's like the same thing as Del Rio but a bigger name and less likely to take the job, I think. Then again, maybe it wouldn't be that surprising? He's only in his second year with the Rams but they look like they'll be one of the worst teams in the NFC and he'd be able to take over in L.A. before the New Year.

He's probably a lifer at Northwestern, right? But if he's not he might be a sneaky good hire. He's familiar with a private school setting, he's young and I think he could handle the L.A. spotlight reasonably well, and he's been doing more with less for a long time. If he's going to leave Evanston (and he's been there 8 years already) the USC job would be a good reason. 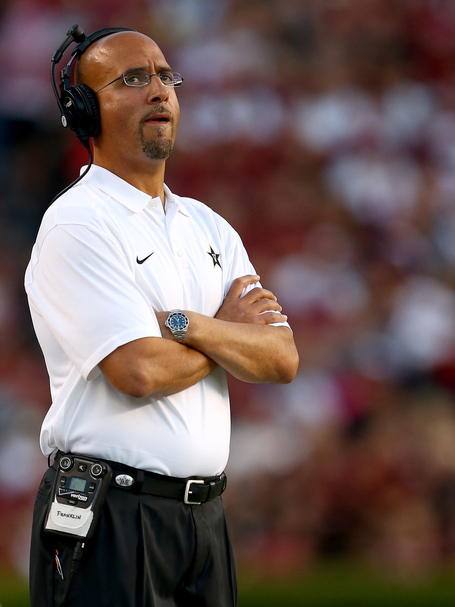 Franklin's name popped up immediately and he's someone I really think may get serious consideration at some point in the hiring process. For some reason I can just see this guy at USC: Good rebuilding job at a private school, he's done well at recruiting, the personality is there, and he doesn't have deep ties to his current school. I'm not sure he'd be a great candidate for USC though and I expect them to aim higher in their initial search.

His name is being thrown out there but I seriously doubt he leaves he alma mater after just one season. I also doubt that USC is all that interested in someone with so little overall coaching experience.

Yeah, Morris probably isn't leaving the comfortable 6-year, nearly $8 million deal Clemson just handed him less than 2 years ago. His stock has risen like a rocket since the beginning of 2011 but let's not forget he was coaching in high school less than 4 years ago. However, he did interview for the Texas Tech job that opened up last year so he may be more than willing to listen to USC. 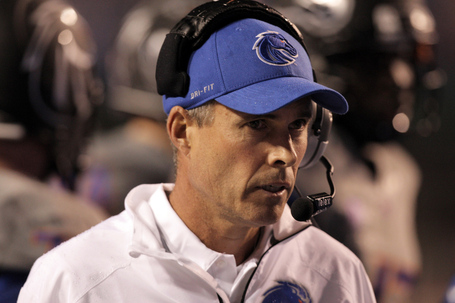 Petersen has seemingly rebuffed many offers from big programs in recent years but USC just might be the right fit for him. He hasn't been the head coach in Boise for terribly long but in combination with his days as OC he's been with the Broncos for 13 years. Now may be the time to leave---as his team may lose 3 games for the first time since 2007---and something close to a 'dream' offer is presented to him.

Come on he's perfect for USC in so many ways! Sure his slip up at Arkansas may prevent Haden from considering him but I think Petrino could do a lot of good things for the Trojans.

I don't know if he's a cultural fit in terms of personality but scheme-wise there's probably a lot to like, especially for the old guard at USC. Roman's one of the hottest names on the market and could make the trip down the coast to one of the top jobs in college. However, he did just sign a 2-year extension with the 49ers less than 4 months ago. 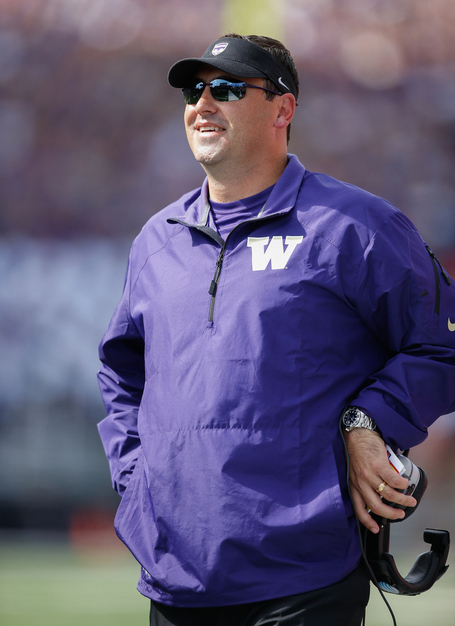 He's always seemed like the choice to me. Sark is young but he's been coaching at the BCS level for almost 15 years, he has decent experience at a major program, he's recruited quite well on the West Coast, and he has the familiarity with USC from the Carroll era. Yet, I've seen a lot of backlash against Sarkisian from USC circles.

I think he's a sneaky good pick but Smart's probably not going to leave the SEC. I would guess if Texas strikes out on Nick Saban that Smart might consider moving to Austin, but I doubt Los Angeles is in his plans.

I still can't believe that Strong is 53 years old, nor that he's making $3.7 million per year at his current gig. You have to think that salary is going to keep him at Louisville for a little while longer. Still, Bridgewater will be in the NFL next year so would it really be all that surprising if he jumped ship? Nah, he probably stays to compete in the ACC for a little while. 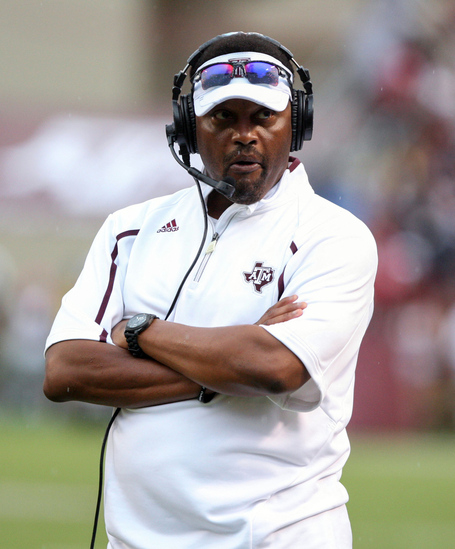 So who do you think it will be, OFDers?