Do not trust the leprechaun, Trojans! Whatever it is, I fear the Notre Dame Fighting Irish, even though they bring special teams prowess.

Looking Ahead to Southern Cal

For as poor as Southern Cal has looked all season, they have, arguably, the biggest return threat, in my opinion, that the Irish will face this season in Marqise Lee. He is shifty, fast, and is a playmaker. That said, he only has 8 punt returns on the season for a total of 46 yards, an average of 5.8, a long of 18. The long punt return was against Arizona State and I invite you to check out my Arizona State Preview to see what happened on it (TL;DR: It was a combination of Lee’s speed and shiftiness and ASU’s overpursuit). Nelson Agholor has taken 2 punts for 16 yards, an average of 8 per return. Darreus Rogers has one return for 5 yards. Su’a Cravens took one punt vs. Arizona for a 1-yard return. Lee also is the primary kick returner. He has 5 returns for 99 yards, an average of 19.8 per return. Agholor has 3 returns for 45 yards and Kevon Seymour has 5 returns for 44 yards. No punt has been returned longer than 18 yards and no kick has been returned longer than 34 yards (Lee had that one against Utah State). There are no ifs, ands, or buts about it—these stats are pretty mediocre for the level of skill Lee and Agholor possess. Lee’s 18-yard return was mostly due to Arizona State’s poor punt strategy, in my opinion. However, we have seen what he can do and the Irish cannot discount his playmaking ability in returning punts and kicks.

On the kicking side, Andre Heidari is Southern Cal’s kicker. He is 5-8 on the year, with makes from 20, 52, 22, 25, and 45. He missed both of his attempts vs. Washington State from 32 and 43 and also missed a 46 yarder against Utah State. The 45-yard make against Arizona was Heidari’s first 40-49-yard make of the year. The 32-yard miss against Washington State was blocked. Heidari is also the kickoff man, having 30 kickoffs with only 7 touchbacks and one out of bounds. Craig McMahon has 1 kickoff for 65 yards and Kris Albarado has 1 kickoff for 56 yards. Their coverage unit is allowing an average return of 19.5 yards on 24 returns. The longest return of the season allowed by the Trojans was to ASU’s Marion Grice, who the Irish saw last weekend. He had a return of 36 yards against Southern Cal. Compared to our previous opponents, this is a large number of returns and I can see the Irish having a lot of opportunity in the return department on kickoffs next Saturday, but considering the average, Southern Cal’s coverage team s pretty good and the Irish are going to need to maintain discipline and block well to have success.

As for punt returns, the stats are not so promising for the Irish. Kris Albarado is Southern Cal’s punter. He has 34 punts on the year (that’s almost 7 PER GAME!) for a total of 1354 yards, an average of 39.8 per punt, a long of 64(!) , only one touchback(!!), 16 inside the 20(!!!), 8 fair caught, and 3 over 50 yards, with none blocked. Their coverage unit has allowed 11 returns for 67 yards, an average of 6.1 per return. The longest return of the year on a Southern Cal punt was by Scott Harding for Hawaii, who had a 7-yard return. If there is an all-star on Southern Cal’s special teams, the award certainly goes to Albarado. His stats are truly stellar and their coverage unit is certainly good enough to limit Notre Dame’s chances next Saturday. However, they have still allowed returns on almost a third of their punts, leading me to believe that Albarado outkicks his coverage a lot. ND's punt return unit might get some chances on Saturday, but they are going to need to block effectively, as Southern Cal's punt team covers very well.

What do we take from these stats? For starters, Southern Cal’s kickoff and punt coverage teams are pretty good, and it is going to take disciplined play to succeed against them. Albarado is right up there with some of the best punters ND has faced this season from Purdue, MSU, and Oklahoma. Heidari is a spotty kicker but he has a leg, as he made a 52 yarder this season. This isn’t the worst special teams unit the Irish have, or will, face, but it is about average, trending towards mediocre. 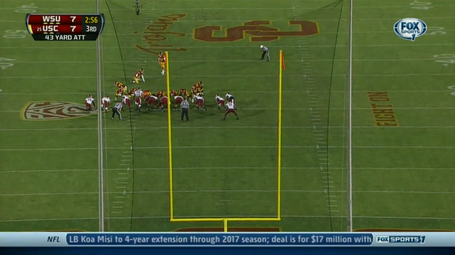 Here's Heidari lining up at the right hash. Now, he should be aiming for the inside of the right goal post on this kick. This is a problem hash for right-footed kickers, as we have seen Brindza's struggles from the right hash throughout this season. 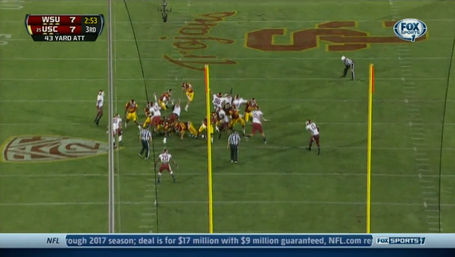 Now, it's tough to tell but I think Heidari's hips are too far to the left. This is certainly not as drastic of a hip placement as Brindza's was in his miss vs. ASU, but that's why this ball ended up only going slightly left and not into the crowd like Kyle's miss. 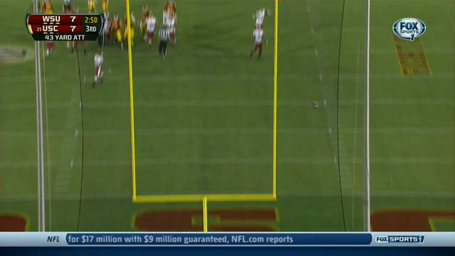 And he hooked it. In all honesty, the kick didn't look that bad to me, but it just goes to show you how important a hip placement on a kicker can be. FS1 tried making a big deal out of this: 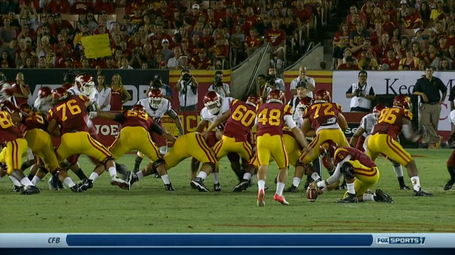 LACES OUT, CODY. Kessler never turned the ball and Heidari was forced to kick the laces. Lots of commentators try to spread the idea that it's impossible to make field goals when kickers kick the laces. HOWEVER... 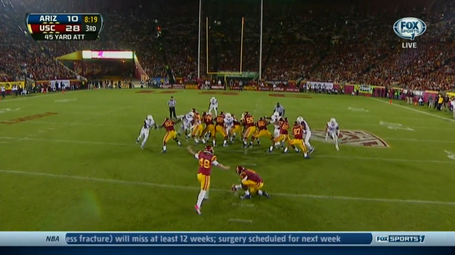 Here's Heidari's make vs. Arizona. Note that the laces are also in on this kick. I think, therefore, that the culprit for the miss was his hips and not the laces. Now, don't get me wrong--it's a WHOLE lot easier to kick a ball on the bare belly of the ball as opposed to the laces, but I don't think that the miss vs. Wazzu can wholly be blamed on the hold. Heidari certainly had the leg to get it there but I think his hips were too far left. Still, holding footballs laces in is poor play, poor discipline, and not smart. It lowers the make percentage, in my opinion, but it doesn't make it 0%. At least the blocking was better--on the 32-yard blocked FG attempt, a Wazzu player came, quite literally, up the middle and was practically on top of Heidari and Kessler when Heidari kicked the ball. What do we make of this? Well, Heidari is certainly spotty from long distance and this poor hold certainly didn't help him, but he also pulled the ball. If the Irish can keep his attempts to long distances, they have a shot to take advantage of the poor special teams play. 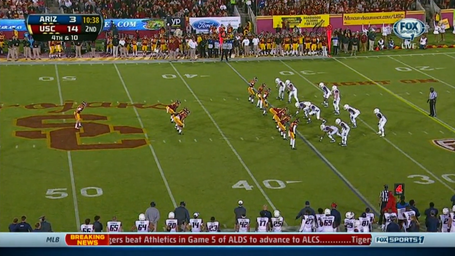 Southern Cal, like all smart teams out there (looking at you, Michigan), runs a spread formation on their punts. Perhaps not shocking from the Arizona box score, Southern Cal moved the ball at will and Southern Cal's punts came inside Arizona territory. Because of this, I think that is why they are in a max protect formation here. They have no gunners to the outside but still got good coverage downfield. Southern Cal's first punt, for example, was downed inside the 5-yard line. What do we make of this? Well, it bears repeating that Notre Dame is going to need to properly stalk block the coverage team downfield if they want to return any punts at all. The chances are in their favor, as Southern Cal is allowing returns on a third of their punts. Personally, I will be happy if Albarado sticks to his average of almost 7 punts per game. If that's the case, then the defense is doing something right. 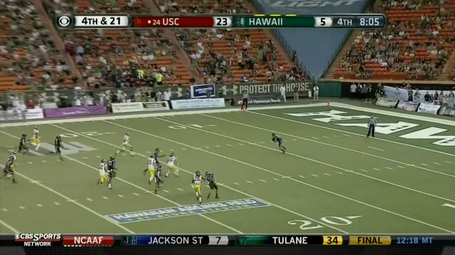 Here's Harding, for Hawaii, catching the ball at his own 10. You can plainly see that Albarado outkicked his coverage by a good 10 yards, giving the return man time to view the field. What hurt Hawaii is while most of their guys are properly blocking, one guy (at the 25, right hash) decided to not block and his man ran in unscathed on the Hawaii return guy. Also, while Harding is looking right, he should be looking left, as there are more blockers that way. I think he saw the white shirts to the left and decided to go right, even though there are two Southern Cal coverage men in his way with no blocking. 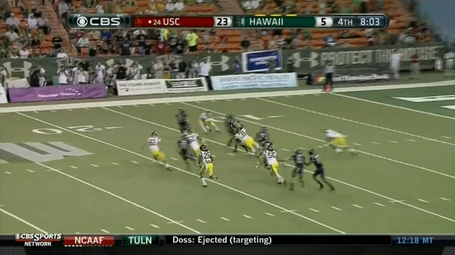 Harding did a great job by making the first man miss (and the other guy at the top also overpursued, as you can see him slipping to the ground). Unfortunately for Harding, his team just didn't block and one of the middle Southern Cal coverage men ran him down. What can we learn from this? Block, ladies and gentlemen. If Albarado outkicks his coverage on Saturday night, TJ is going to have time for a return, but he can't always make something out of nothing, like he did vs. the Sun Devils. At least TJ on that return had Hardy and Onuwalu blocking for him, but Harding had nobody. ND NEEDS to block to have good returns on Saturday. The chances may be there and they need to take advantage of them if they can. 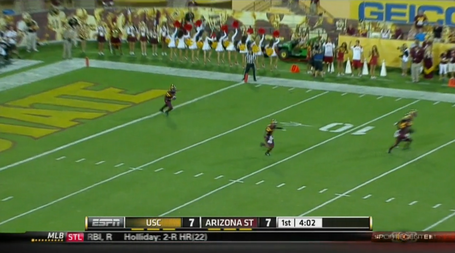 Now, ESPN's guys on this game said the kick was "a little short," but this kick had great hangtime, and I think Southern Cal does what I like seeing Kyle do: kick the ball high, force a tackle inside the 25, and call it a day. Of course, that requires the kickoff guys to keep their lanes, contain the play, and shed blocks. 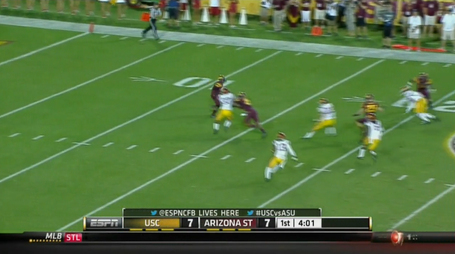 ASU had some utterly horrific blocking on this kick return. Note that only two guys are properly engaged and one of them forced Grice to make a move AT THE 14-YARD LINE. That's terrible. Let's continue watching to find out how they polished this turd. 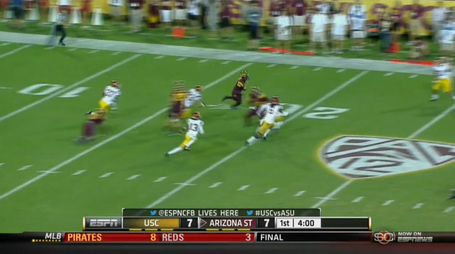 Well, there's your answer: Speed. Grice turned on the jets and just cut it to the outside. Note that Southern Cal overpursued like crazy but they still have a guy to the outside to force Grice back inside.

It's shocking to me how many Southern Cal guys ended up on the ground. However, on the return, Grice found a hole and made a beeline for it. In what proved to be a positive for the Southern Cal kickoff unit, they forced Grice back inside and he was forced to slow down to make moves to find the holes. This, inevitably, led to: 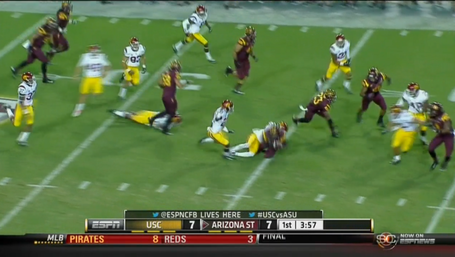 Grice getting caught from behind. This was a great kickoff return by ASU, mostly due to the efforts of Marion Grice turning on the jets. If he didn't get forced inside, or if ASU had decided to block, he could have easily take this one to the house. Southern Cal lucked out on this. So, as always, we have to ask ourselves what do we make of this? Well, Heidari doesn't kick for distance, so George Atkinson III, Cam McDaniel, and whoever else is back there are going to have their chances Saturday night. Along with the punt return, they NEED to block and maintain their blocks if they want to have a long return. The chances are certainly going to be there, they just need to look at plays like Grice's and see that, but for 1-2 missed blocks, he could have taken it to the house.

As always, I welcome comments below. I bid you good kicking.