"Why am I getting all these angry and confused emails from Notre Dame alumni?" --Pope Francis

Did you all enjoy your week off? Everybody rested up and ready for the second half of this crazy season? Happy to hear about the exotic location for next year's Shamrock Series? Well, in that case, let's get the ol' Notre Dame hype machine revved up once again!

Although the team was idle this past week, the same could not be said of the OFD Commentariat. The biggest postgame analysis after the Shamrock Series victory against ASU was not about the stadium, the uniforms, the use of timeouts, or the playcalling...rather, the greatest concern was what transpired in the corner of the endzone on T.J. Jones' touchdown catch. Was Mark May expressing his opinion of the game's irrelevance? Were T.J. and the ref engaging in a secret touchdown celebration? Well, according to all of you, our resident Special Teams Guru Patrick Rigney saw something that everyone else missed [click to enlarge]: 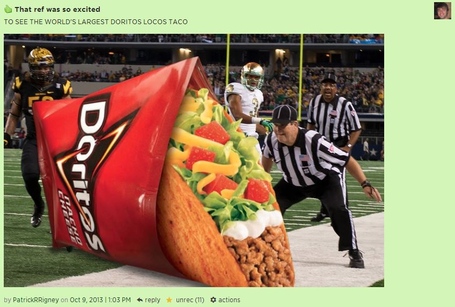 And with that, we have our first two-time King of the Commentariat! Yes, Patrick Rigney has burst onto the OFD scene and punted his way into the hearts of the OFD community. However, since his attempt to fill America's power vacuum didn't go so well last week, he is now applying to fill the head coaching vacancy at Southern Cal. Frankly, I can't see how "Two-time Defending King of the OFD Commentariat" wouldn't automatically land him the job...although I just realized that we may have made him overqualified for the position. SON OF A--

Anyways, as we prepare to clash with hated rival USC, I strongly considered making this "TSW: Target Practice Edition" by having Coach Emeritus Lane Kiffin as our photographic guest star. However, since we more or less always take the high road here at OFD, I've decided to cleanse our collective palates and go with a special teams photo in honor of King Patrick. Here we have UCLA linebacker Jayon Brown running into Cal punter Cole Leininger during their game last week (which UCLA won 37-10). Your editor just yelled from his desk, "I need photos--photos of punters!" and you have 3 minutes to deliver him this picture with a solid caption. What's it gonna be?

Caption away, vote with rec's, and BEAT USC!