Notre Dame was widely considered to have one of the best defensive lines in the country before the start of the 2013 season. While they have been stout against the run, it's fair to say their production in passing situations had been disappointing through the first 5 games of the season. This changed against Arizona State. The defensive line was able to generate consistent pressure and was credited with 4 sacks as a group. Strangely enough, this improved production was spurred on in part by play calls where the defensive line didn't rush the passer. Let's take a look at the film and I'll show you what I mean. 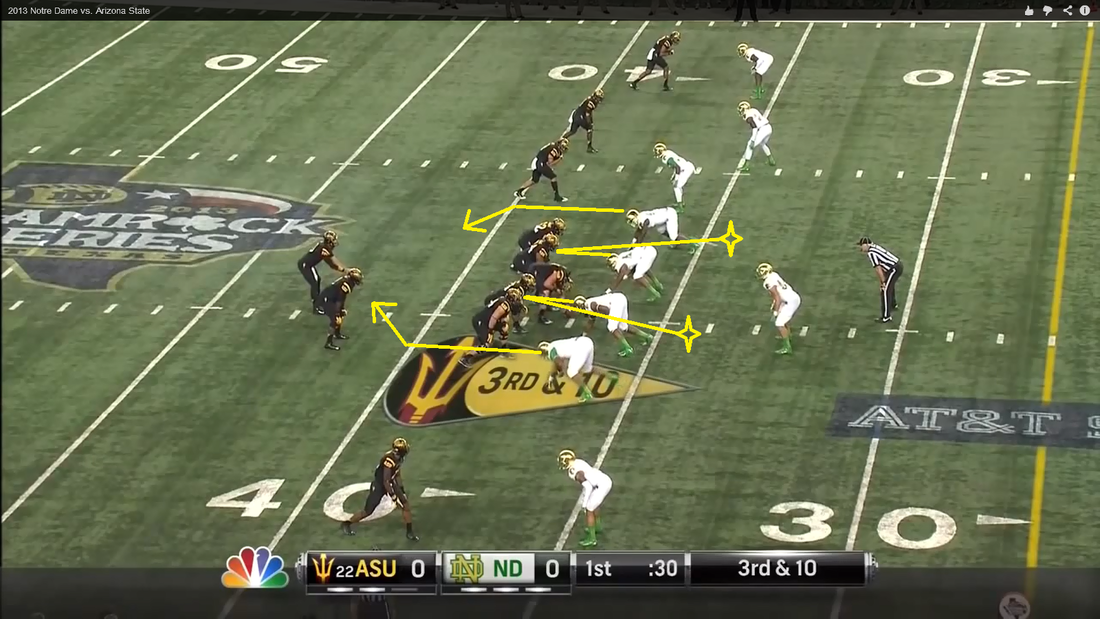 3rd & 10, Notre Dame is in a 4 man front. Traditionally out of this look Notre Dame rushes 4. In this instance Bob Diaco has something a little different in store. He has two defensive ends / outside linebackers Ishaq Williams (# 11) and Romeo Okwara (# 45) lined up as defensive tackles. The plan is to make it look like a 4 man rush and have Okwara and Williams drop off post-snap to play coverage and spy the quarterback. 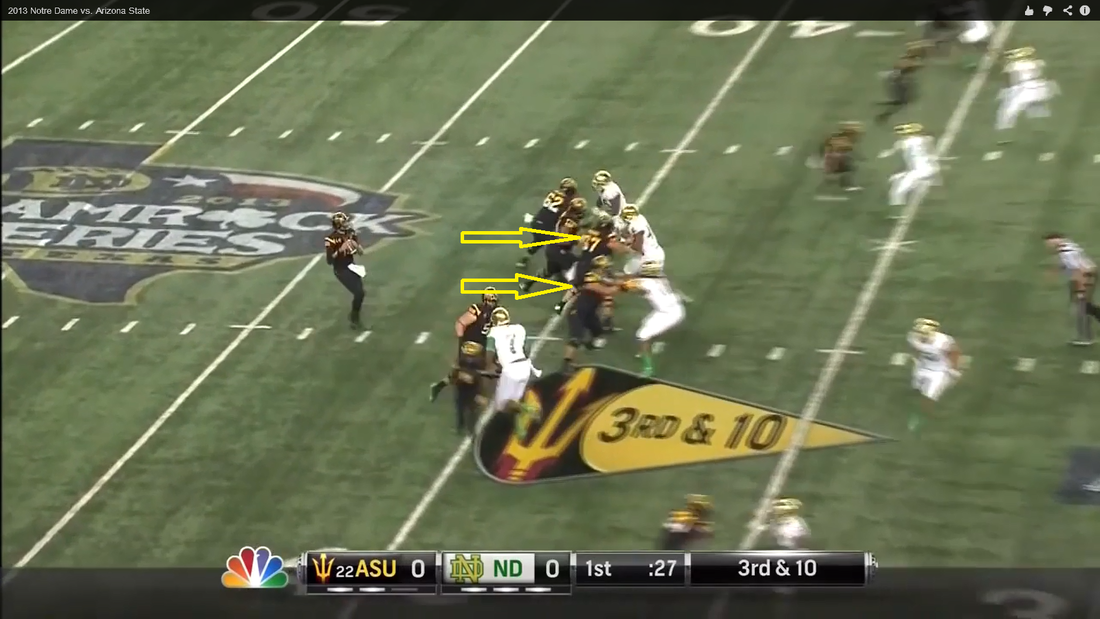 A fraction of a second after the snap. Okwara and Williams have both engaged Arizona State's guards. As you will see this initial attack will pay dividends as the play develops. 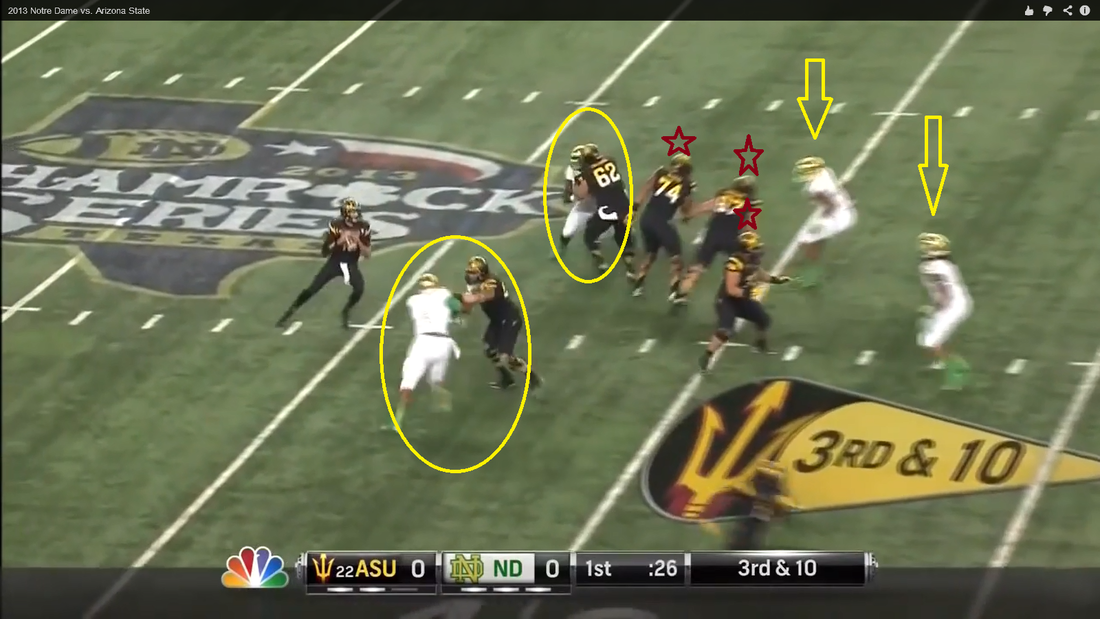 Arizona State's guards have to honour the initial pass rush move. This leaves Prince Shembo (# 55) and Stephon Tuitt (# 7) alone with the offensive tackles. This is part of the genius of this play design. It forces Arizona State to try and block Notre Dame's two best pass rushers one on one. The rest of the ASU offensive line (crimson stars) is left to stand around doing nothing, waiting to block two Irish defenders (yellow arrows) who aren't rushing the passer.

All year Notre Dame has been able to generate decent pressure off the edges. Yet quarterbacks have avoided trouble by stepping up into the pocket and running or passing for big gains. This subtle adjustment against ASU addresses that concern. Notre Dame can pressure with only two pass rushers and if the quarterback steps up, Williams and Okwara are in good position to make a play. 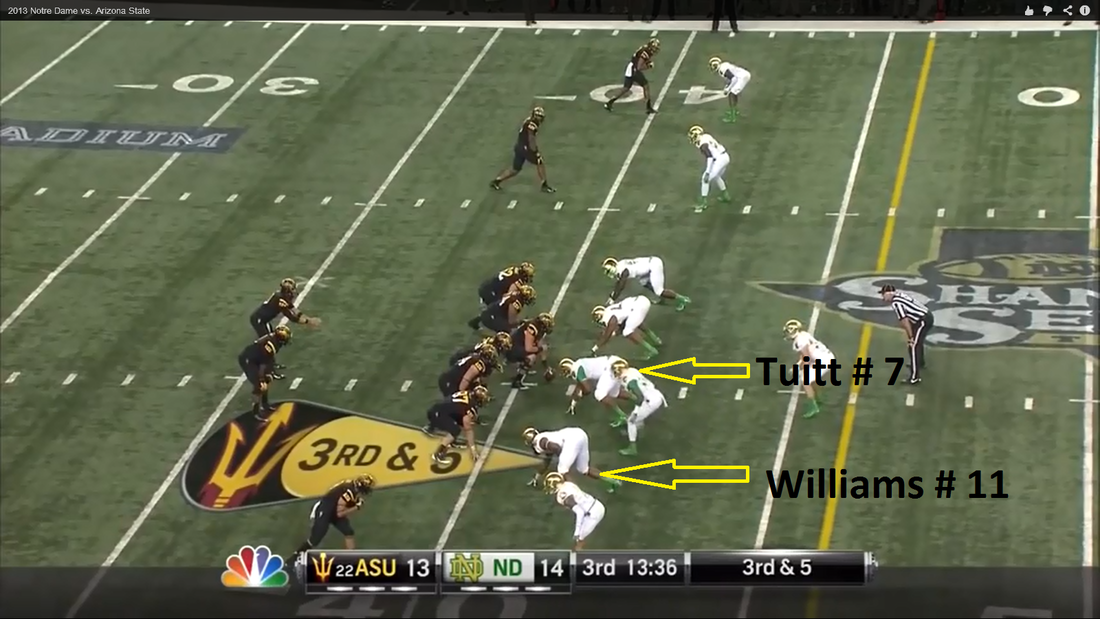 Notre Dame is in a 4 man front again. Tuitt is in the tackle spot and Williams is lined up as an end. Taylor Kelly looks over the defensive alignment and turns to the sidelines for a new play. Check out the next screen shot to see the adjustment Notre Dame makes. 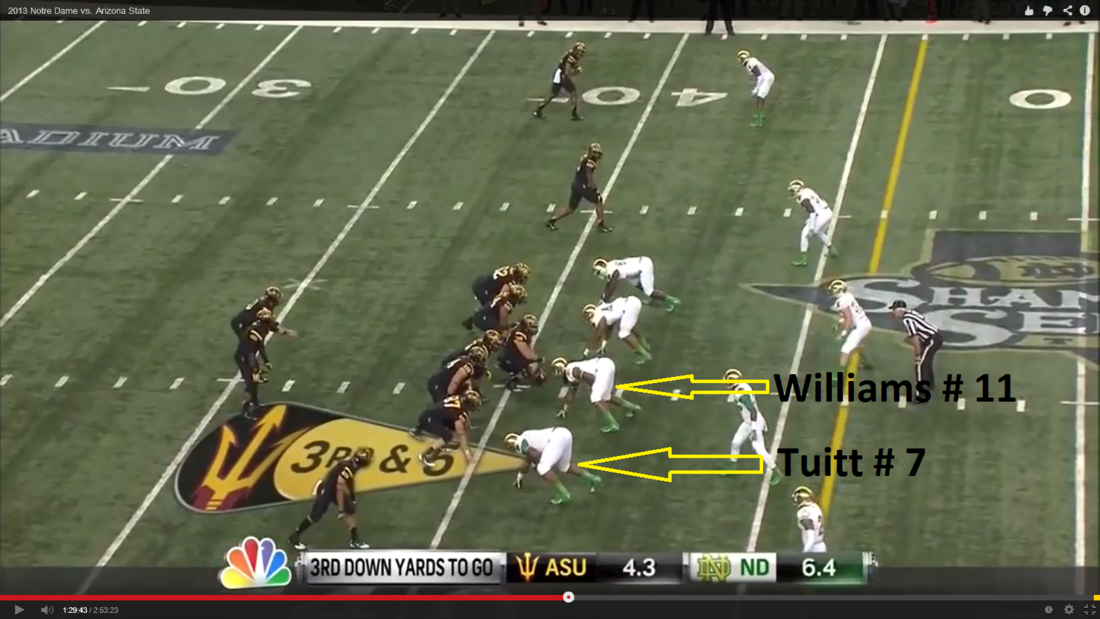 We didn't see this on TV because NBC showed a close up of Taylor Kelly while it was happening, but Notre Dame made a slight change to their alignment. Note the screen shot, while Kelly was getting a new play, Williams and Tuitt switched locations. The Irish are expecting a shallow crossing pattern and this new alignment will help them defend that play more effectively. A nice bit of cat and mouse by coach Diaco. 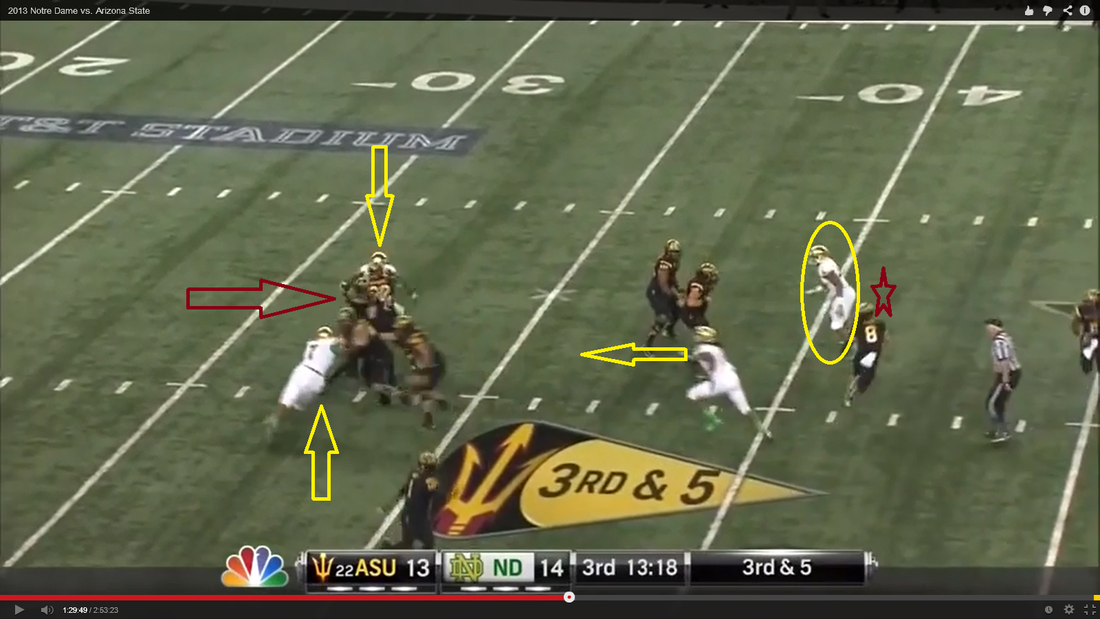 Again, Notre Dame has Okwara and Williams attack the guards and then back off. Tuitt and Shembo have done an excellent job of collapsing the pocket from the outside, bringing significant pressure off the edge. Ishaq Williams senses that Kelly might try to step up and run, so he attacks to keep him in the pocket or make a tackle. Okwara (yellow circle) demonstrates the other advantage of this adjustment. He is in great position to disrupt the shallow crossing pattern that serves as a safety net for Taylor Kelly (crimson star). 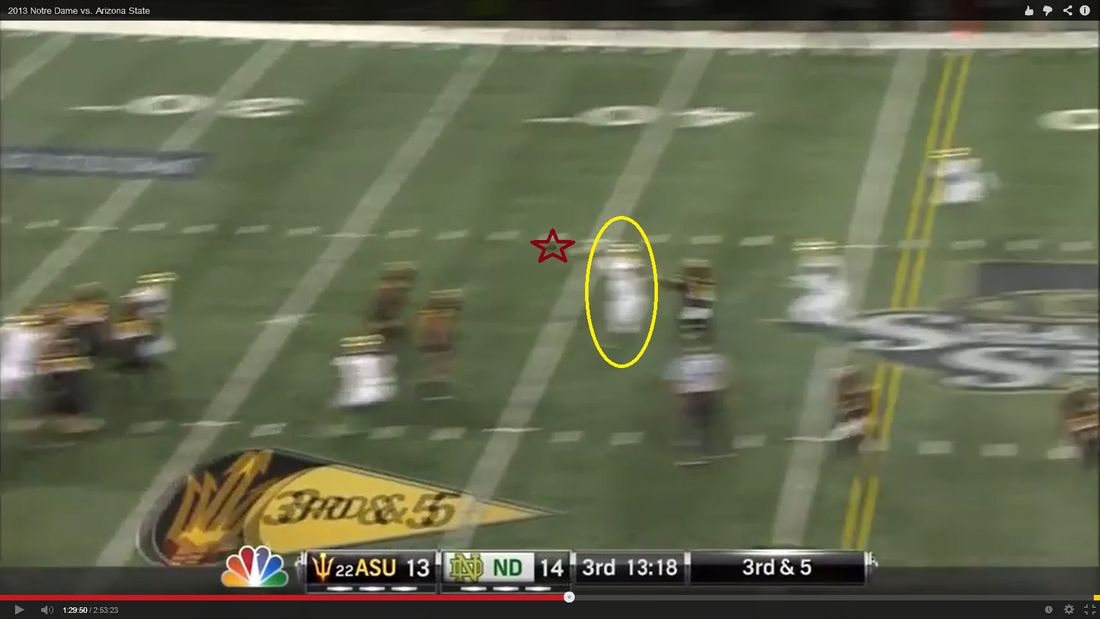 It's blurry, but that is Romeo Okwara in the yellow circle just about to deflect the pass to the shallow crosser (the ball is in the middle of the crimson star). This is a pattern Notre Dame has struggled to stop this season and it's one that ASU throws on a regular basis (see ASU preview for more details). In this case, a great scheme by Bob Diaco nearly leads to an interception for the Irish. 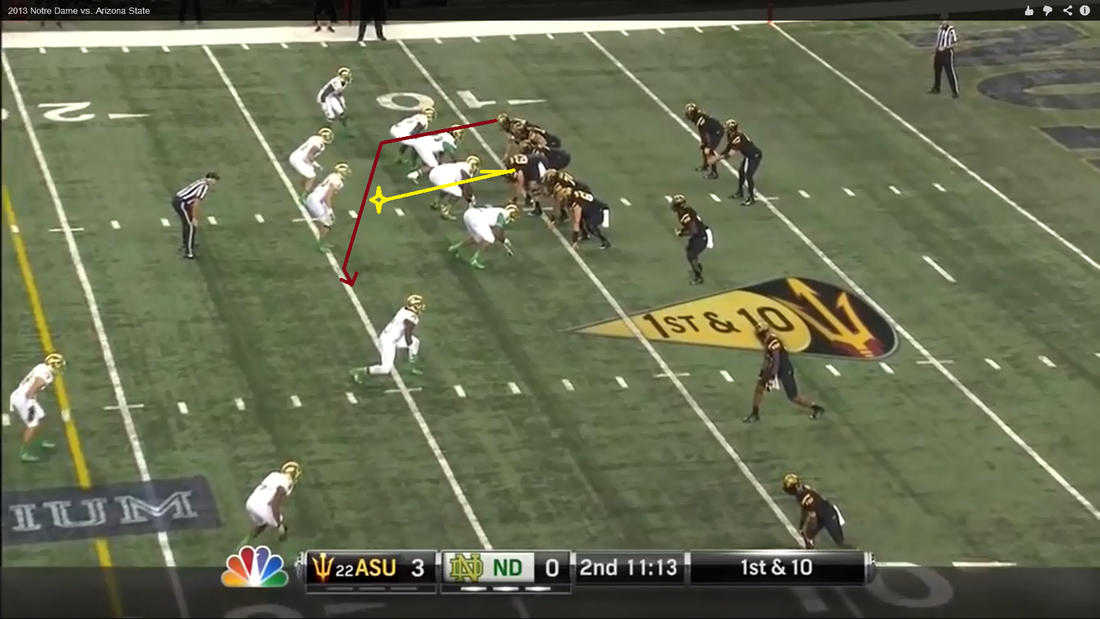 Yes you read the title correctly. Arizona State is going to try and hit a 5 yard pass to tight end Chris Coyle (# 87). Notre Dame is going to counter with 340 pound nose tackle Louis Nix in coverage. 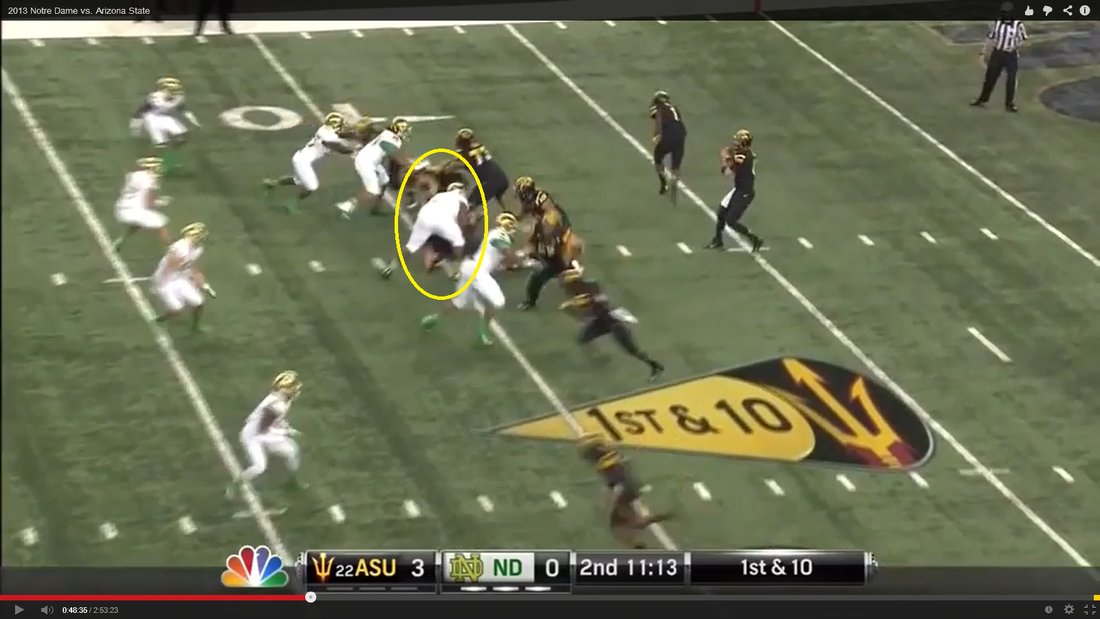 Arizona State attempts to cut Louis Nix. Whenever a team uses cut blocking in a passing situation, it means the quarterback will be throwing the ball quickly. Nix recognizes the cut block and does a good job of getting his hands down to defeat it. Traditionally, defensive linemen are taught to continue towards the quarterback and get their hands up in this situation. The thinking is that they likely won't get a sack, but they might be able to deflect the pass. 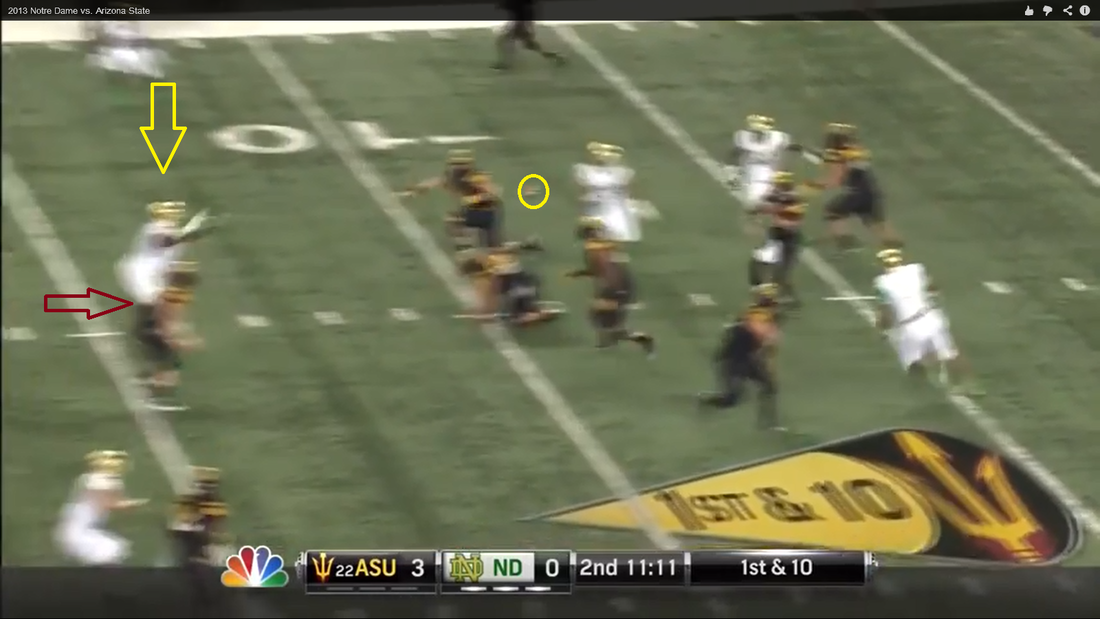 When Nix sees the cut block instead of carrying on to the quarterback, he drops into pass coverage. 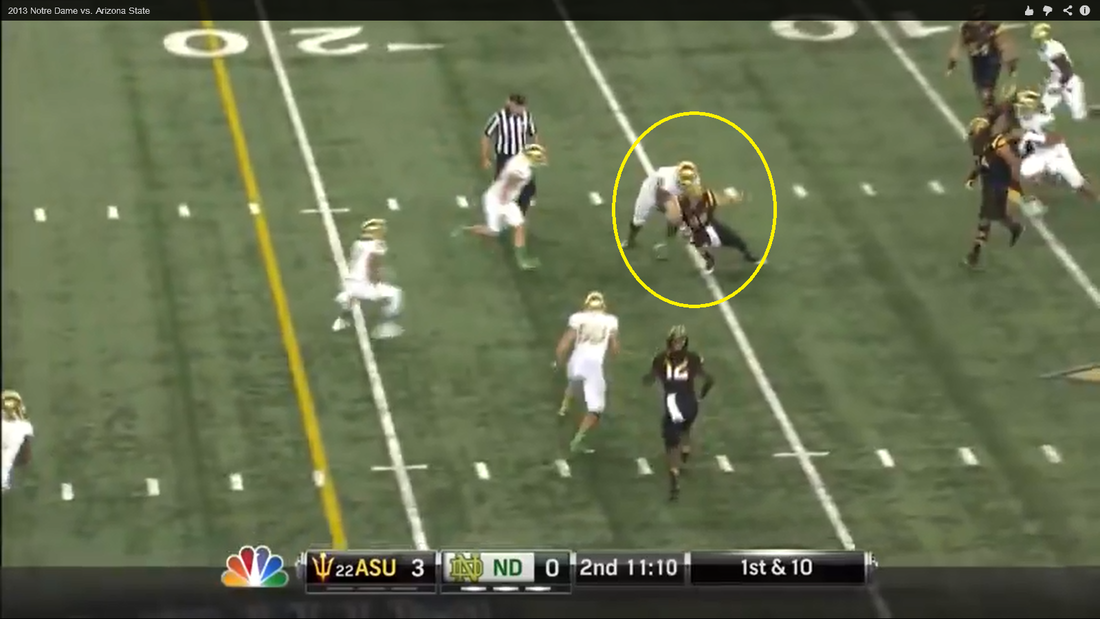 Nix breaks up the pass. Well he sort of broke up the pass. In reality I think the tight end was so worried that Nix would land on him, he dropped the ball. Regardless, the pass was incomplete.

When you watch the video take note of how hard Nix attacks at the snap of the ball. It is clear that he is planning on playing the run or rushing the passer. However, he has the presence of mind to stop and drop into coverage when he sees the cut block. I don't believe this was a called play like we would see in a zone blitz situation (as an aside, none of the plays I broke down in this post are zone blitzes). I believe this was a post-snap adjustment. I suspect it was something the Irish worked on during the week and Nix probably had the freedom to drop whenever he read a cut block and a quick pass. Admittedly Louis Nix can be a bit of a freelancer so it is well within the realm of possibility that he was simply reacting and trying to make a play.

Getting To The Quarterback

So how does having your interior defensive lineman drop into coverage result in more quarterback sacks? Coming into the Arizona State game, opposing quarterbacks could essentially throw the ball to shallow patterns over the middle with little or no fear of a negative play. This was one of the reasons the pass rush wasn't getting sacks. Quarterbacks had the luxury of throwing quick, high percentage passes when pressured. Against ASU, the Irish defense put fear and hesitation back into the quarterback. Taylor Kelly could no longer be certain that the crosser was going to be automatically open. To make things more difficult, it was virtually impossible to get any sort of a pre-snap read on the defensive line drops. The Irish would engage the ASU line, sometimes they would rush the passer, sometimes they would drop off. This uncertainty forced Taylor Kelly to hold onto the ball longer, which in turn gave the pass rush more time. Let's take a look at an example of this. 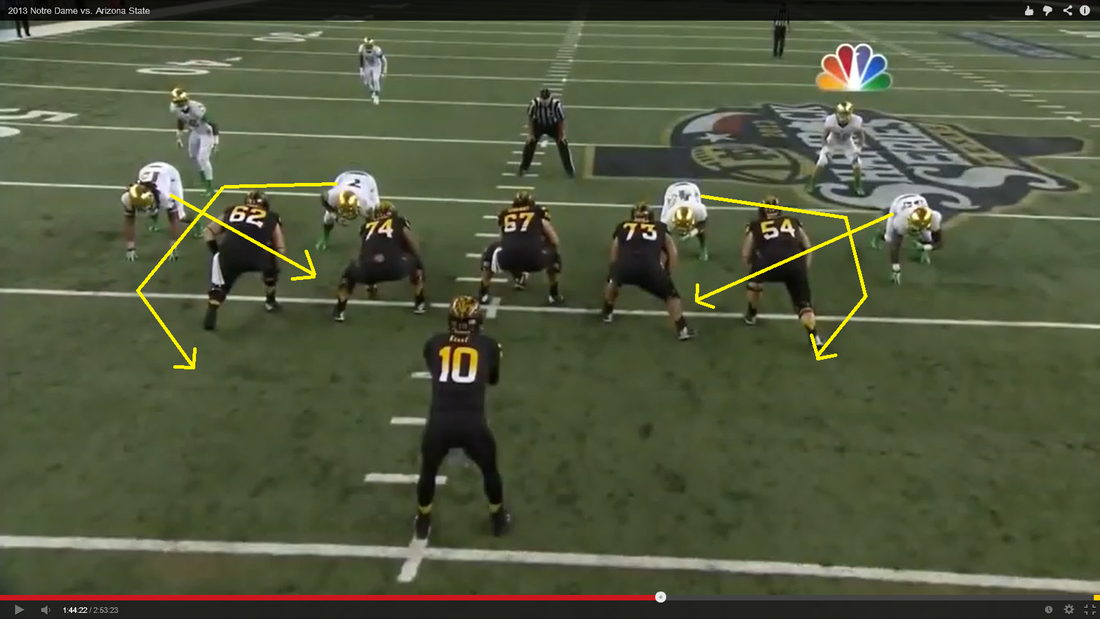 Notre Dame is going to run a stunt out of a four man front. The Irish used this stunt extensively in 2012, take a look here for a more in-depth discussion of the last year's pass rush. 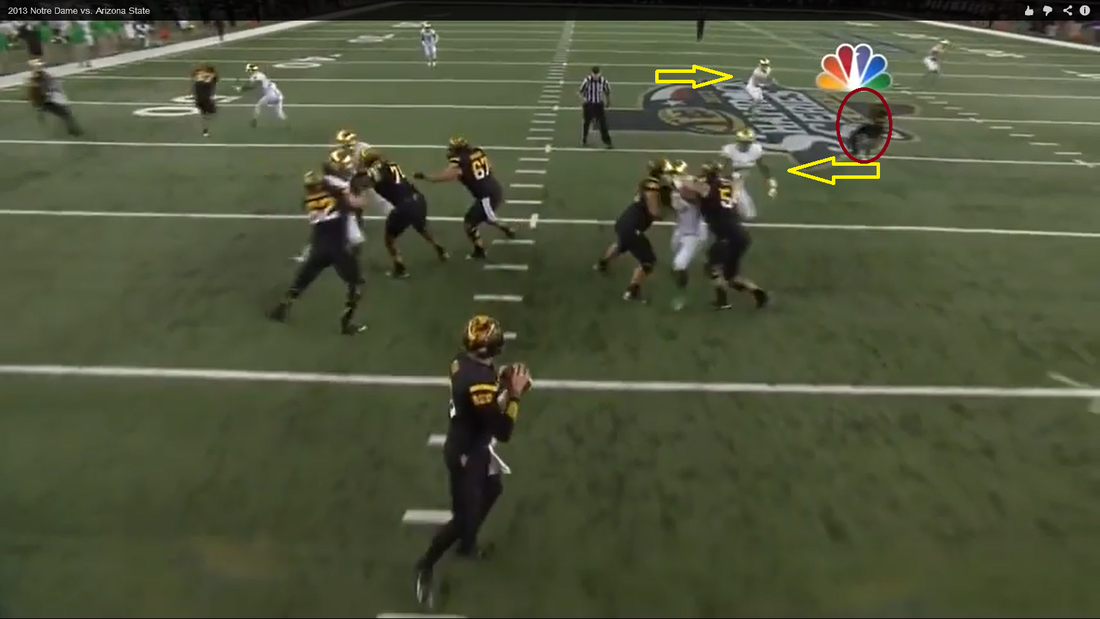 As you can see, the shallow pattern (crimson circle) is pretty well covered. There is a linebacker over the top (yellow arrow) and Romeo Okwara (yellow arrow) looks like he might drop into coverage to take away the underneath. Given that Notre Dame has dropped defensive lineman into coverage before, you can see why Kelly might be reluctant to throw the shallow pattern. Instead he holds onto the ball and waits for one of the deeper patterns to come open. 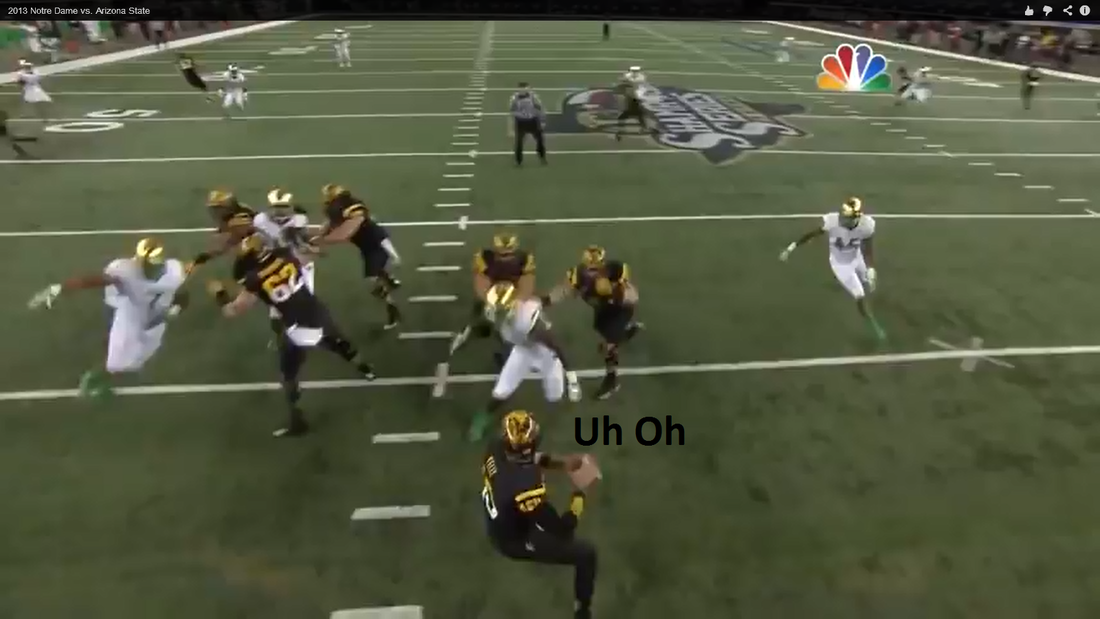 The quarterback holds onto the ball. The pass rush has time to get to him. The blood is in the water. The sharks are going to feed. Uh Oh, indeed.

I'm not suggesting that dropping defensive linemen into coverage was the only reason the Irish had success against a very good Arizona State offense. There is no question, the linebackers broke on the ball well, the secondary did a better job of taking away the inside in man coverage and the defense as a whole tackled very well. Even so, dropping linemen into coverage was an exceptional adjustment by coach Diaco and his staff that clearly had an impact on the game. Having Williams and Okwara patrolling the shallow middle helped prevent Taylor Kelly from scrambling out of the pocket and making plays with his feet. An added bonus was this adjustment meant that Tuitt and Shembo were left one on one with ASU's tackles. As well, dropping linemen from time to time played a key role in limiting one of Arizona State's most effective plays, the shallow crosser. This forced Taylor Kelly to look down field, which meant he had to hold onto the ball for longer, which allowed the Irish pass rush time to get to him. Finally, this adjustment helped the Irish maximize the unique physical talents of players like Romeo Okwara and Ishaq Williams. There are very few defenders in the country who can play defensive tackle in a 40 front, rush the passer, spy an athletic quarterback and drop into coverage. A tip of the cap to the Irish coaching staff for this adjustment, this is what schematic advantage should look like.