Standing next to a beaming Pope Francis at a podium in St. Peter's Square, Swarbrick opened the press conference by stating, "I am very pleased to announce that after extensive talks between His Holiness, myself, and Fr. John Jenkins, we have quite literally received the Church's blessing to play a Shamrock Series game at this historic site." As his words were translated into 15 different languages, Swarbrick continued: "It has been our hope for quite some time to play in a location that honored both our Catholic identity and our untapped international fanbase. And thanks to the benevolence of His Holiness, this once-impossible dream is finally a reality!"

The presser was attended chiefly by Notre Dame beat reporters--many of whom had been hustled onto University jets the day before with no explanation--as well as many confused Italian passers-by. Before anyone could muster a question, the Pope gave his own statement: "In the exercise of my office as shepherd and teacher of all Christians, and in virtue of my supreme apostolic authority, I solemnly declare that we would love to have Notre Dame come here for their annual ritual of beating the snot out of opponents."

Pausing briefly to acknowledge the raucous cheers from reporters, he continued: "As everyone knows, the Blessed Mother has long held a special place in my heart; as such, I could not be happier to welcome Our Lady's beloved sons and daughters to Rome!" These last words were drowned out by more applause from the rapidly-gathering crowd of bishops, priests, and seminarians, many of whom were from the North American College. 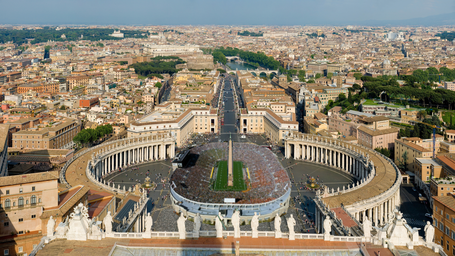 Before taking questions, the two leaders discussed the playing venue itself. The stadium would be erected in St. Peter's Square itself and will easily hold over 100,000 raucous fans. The Holy Father pledged to provide natural turf from the Vatican Gardens, while Swarbrick expressed his eagerness to utilize the "OmnipotenTron" videoboards that so often "regaled the eyeballs" of millions of devout pilgrims. Swarbrick did acknowledge that leaving the huge obelisk in the field of play presents "a unique challenge", but dismissed any concerns about it. And instead of a halftime show, the Holy Father said he would set up an altar in the west endzone and say Mass for all the attendees. "If anyone skips Communion," he said with a wink, "I'll excommunicate them on the spot!"

The first question came from NBC's Keith Arnold, who inquired who the opponent might be. "Well", replied Swarbrick, "I can't say for sure...but I think a certain someone would be happy if the opponent was a certain Jesuit institution." He accompanied this with a playful jab to the Pope's ribs, which elicited a loud guffaw from the Supreme Pontiff and a bone-chilling glare from the head of the Swiss Guard. "So yeah, probably Boston College."

An elderly fellow with a rumpled hat and a prominent sneer stood and asked, "So, how hideous are the uniforms gonna be this year? Another round of trampling on tradition, I suppose? Rockne would never have done this!"

Pope Francis chuckled in reply. "Well, have no fear, my son. First, I'm in charge of an institution that's been around for two millennia and whose founders personally knew Our Lord and Savior Jesus Christ, so I think I know a thing or two about tradition. Second, the uniforms will be wonderful--they'll be the Swiss Guard's Madonna Blue & Papal Gold striped pattern, but with Kelly Green instead of red." He chuckled again as the man's face turned purple, then white, then a sickly shade of green. "Anyone else?" 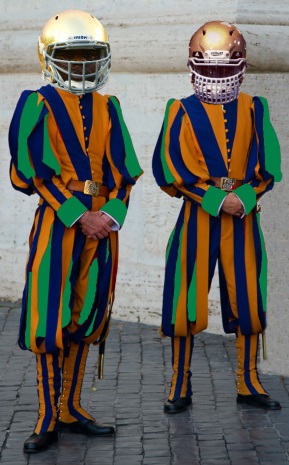 Al Lesar's hand shot up. "Director Swarbrick, this is an outrage. How are we expected to recruit in such a football-barren place such as Europe? And don't you think our guys will be a bit too optimistic about finishing above .500 in 2015?"

Swarbrick sighed and rubbed his temples. "Look, Al...first, this entire article is a giant parody, so ease up a bit. Second, this is a huge draw for recruiting, and Europe is a massive untapped pipeline that we can gain a huge schematic advantage from if we get there before anyone else. Just look at Carlo. And heck, we have two Italians on the hockey team, for Chri--er, for cryin' out loud! As for the optimism? Well, if you're so negative about it, give your ticket to someone else!"

Matt Fortuna asked who the officials would be for such a prestigious event. "Why, myself, of course!" exclaimed Francis. "After all, Mr. Fortuna, would you try to argue with a referee whose judgement on matters of football doctrine is divinely infallible?" Warming to the topic, the Holy Father also stated that the Cardinals who were Prefects of various ecclesial Congregations would serve as the other field officials, while the ACC would man the replay booth in the dome of St. Peter's Basilica. 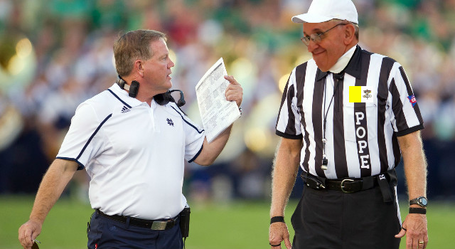 One Foot Down Editor-in-ChiefÂ Eric Murtaugh was next to rise. "Holy Father, I've been analyzing the matchups, and--"

He was cut off as the Pope exclaimed, "Ah, Eric, very good to see you! I always look forward to reading your weekly 30-page encyclicals, but now may not be the best time. Over lunch tomorrow, perhaps?"

"Yes, your Holiness," replied Murtaugh with a grin. "Did you still want me to bring my friend NDMSpaint along to do your official portrait?"

"Of course!", said the Supreme Pontiff. Lowering his voice to a stage whisper, he winked and added, "I'll be sure to bring some of that Miracle Whip you both love so much."
[Ed. note: If you're new to the site, do NOT ask about this in the comments. Bitter wars have been fought over putting MW in guacamole.]

One of the last questions concerned the traditional pregame festivities. Swarbrick was coy about most of the changes, but he did confirm a few things: "First, the Holy Father will still say a private Mass on Friday in St. Peter's Basilica for the players. And second--well, let me just say that the Band is going to perform the greatest 'Concert on the Steps' and 'Trumpets Under The Dome' that you'll ever see." When Her Loyal Sons Editor-In-Chief Ryan Ritter (aka "NDtex") inquired whether there was any truth to the rumors that the Golden Dome would be shipped to Rome just for that weekend, Pope Francis smiled knowingly and replied, "My son, I can neither confirm nor deny that statement." 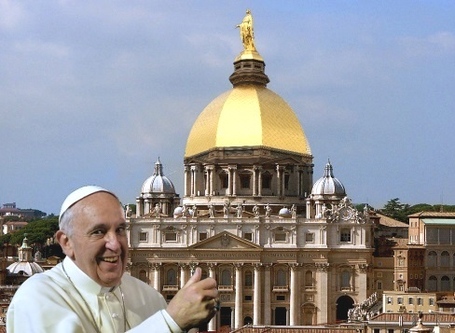 What is your reaction to this news? Is it the greatest thing in the history of things, or is it yet another sign of how far Notre Dame has fallen from its once-great tradition and its Catholic roots? Let us know in the comments! [And YES, THIS IS A PARODY. If you hadn't already figured that out, well...I don't know what to say.]