Brian Kelly and his staff add a second verbal commitment from the Under Armour All-American game this week, this time from a California safety prospect.

Coach Brian Kelly has received his 23rd verbal commitment for the 2013 class today from S Max Redfield (Mission Viejo, CA - Mission Viejo). He is listed at 6'3" and 195 lbs.

Redfield committed to the Irish during the UA All-American game. He was a one-time USC verbal commitment and chose Notre Dame over the Trojans and held several national offers including Oregon, Cal, Oklahoma and Washington among others. 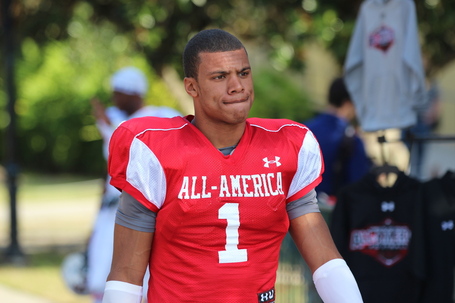 I think it is safe to say that Redfield will make an impact as a freshman, and likely it will be on special teams. He is being recruited as a safety, but I think he is a more natural fit at WR. Depending on where he ends up and how well he performs in camp, he should be able to crack the two deep on either side of the ball at some point during the fall.

As a safety, Redfield is an excellent fit at free safety for the base zone coverage that DC Bob Diaco prefers to run. His highlights show his ability to read the QB and react to the ball. Some of the scouting reports talked about a need to improve in man coverage, but there aren't a lot of safeties at the high school level that have much experience in that area. He probably needs to improve his tackling, specifically around wrapping up the ball carrier, but that can be quickly corrected. Over the summer, SBNation gave their take on Redfield, which can be found here.

As a wide receiver, I think Redfield could be special. His size and physical play (especially blocking) will remind Notre Dame fans of a certain guy by the name of Michael Floyd. While I don't think he quite has the same frame as Floyd, he will probably end up playing at 210-215 lbs. He attacks the ball in the air and is accelerates quickly. With the likely redshirt of Torii Hunter Jr due to a broken leg and existing depth at safety, the staff could give him a shot at WR in camp and see what happens.

Either way, he is a very talented player and great addition to the 2013 recruiting class.