Laying it all out on the line for the world to see. The OFD staff makes their predictions for the 'ship.

Share All sharing options for: OFD Staff Predictions for the BCS Title Game 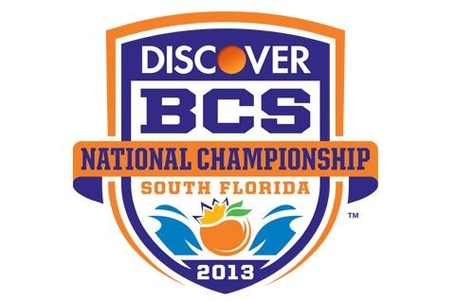 Going into this year's presidential election, I was fascinated by the reaction to Nate Silver. I had seen the hatred of math and projections in sports for years, but it was really fun to see talking heads on cable news with nothing to back up their bloviating screech "WITCH!" at Silver for doing some simple projections. (Silver, who might be an actual wizard, was obviously correct.)

I am now the person on the other side, eschewing any numbers or analysis and only going on blind faith. Alabama is an excellent football team, but they're not invincible. I believe in Manti Te'o. I ~really~ believe in Everett Golson. If this game is close - and there's nothing in either teams' seasons to suggest it won't be - the magical run closes with one more heart-stopping victory.

Sometimes people deserve to have their faith rewarded.

But seriously, I am expecting a tight and low scoring game. I think that Bama will have the upper hand out of the gates as the teams feel one another out through the first series or two. I won't be at all surprised if Alabama is able to put together a couple of early drives as the Notre Dame defense settles in.

It will be key to hold Alabama to field goals on those early possessions.

On offense I suspect that Kelly will try and settle Golson in with heavy doses of Riddick & Wood and some easy short passes. The key for Golson will be taking care of the football and making good decisions. That will be especially important in those first couple of posessions as he gets dialed in. After those first couple of possessions I expect ND to settle in on both sides of the ball and play a solid football game for the rest of the night.

This Notre Dame team has shown that it won't be intimidated by any team or any situation and I expect that will be the case again on the 7th. I am certain that I'll catch hell for saying this in the comments but this team has repeatedly shown that they have the mental toughness to just find a way to win. You can't measure that or assign any statistical evidence to back it up. But I think that Notre Dame will make a few plays late in the game to pull off the upset.

There is the sound of magic in that score. Notre Dame somehow finds a way, much like they did throughout the season. A steady diet of Cierre Wood and Theo Riddick, mixed in with a controlled passing game and a few big strikes downfield gets the Irish out to a lead, only to watch Alabama storm back to a one possession contest.

The game essentially ends on a fourth-and-one, when AJ McCarron gets stuffed by the stout front seven from South Bend around the ND 40 yard line. A few kneel downs from the victor formation later, joy and elation erupt as the SEC stranglehold on the MNC is ended.

On the bonifate foot of Brindza's four field goals and a stirring third-quarter run for six by our young quarterback, the Irish secure the unlikely victory over the supremely talented Tide. Both daunting defenses hold, but ours surrenders two touchdowns to the cleatshod thunder of Alabama's bruising backs; and though kicker Shelley takes three from the Irish on a red zone stand, he and Foster miss twice, and there are no points left to be claimed by the frustrated Tide.

The Fighting Irish prove true to their name and with spirit and vigor unmatched, halt their opponent's final drive at mid-field as the game clock drains. Beside a wide-eyed Coach Kelly, warrior nose guard Louis Nix III hoists the Coaches' Trophy in the air with a jubilant smile as Coach Saban shepherds his tired team from the field, a field finally and fully won by a team none dreamed to see deemed champions.

Get ready for Brent Musberger to call yet another Irish goal line stand to end the magical season none thought was possible. Down 20-17 with a little more than 4 minutes left in the game Davonte Neal will return a punt 50 yards - yes RETURN A PUNT - to the Alabama 10 where the freshman QB will maneuver himself into the endzone after a few pump fakes to both Eifert and Riddick and put the Irish up 4 with 1:30 left.

After a kick return to the ND 35 yard line McCarron will connect deep with Amari Cooper for 30 yards and a screen pass that gets them to the redzone in under 45 seconds. There after a failed pass attempt to Cooper in the endzone, Saban will listen to the Crimson faithful and heed their call to pound the ball. But the Irish defensive front - who fought valiantly all night - will squeeze out every last drop of energy they have to put up another wall. On 4th and goal at the Irish 1, Alabama will hand the ball off to Eddie Lacy where Irish Chocolate's penetration and the jump over by the most decorated player in college football history will stop the forward momentum who will be finished off by one last push from the storming Zeke Motta.

As a Notre Dame fan, of course I'm going to pick the Irish to win this game, but I'm not going to try and convince anyone that Bama isn't as good as everyone thinks. They're a great football team that has won two of the last three championships and it would be an upset if Notre Dame won. But the Irish have a few things going for them that I think give them a shot at winning this game.

First, this game will be low scoring. This isn't a knock on either teams' offense, it's just that both defenses are too good for this game not to be low scoring. Notre Dame has held more explosive offenses (Oklahoma and USC come to mind) in check and Alabama still has the Nick Saban/Kirby Smart brain trust. And when a game is low scoring, it came down to one busted coverage, one timely turnover, or one special teams play, and that's great for the underdog.

Second, the Irish have a playmaker at quarterback. Analysts can point out Golson's inaccuracy or his youth, but a player like EG who can improvise and make plays out of nothing can keep a team in any game - just ask Pitt. So I guess if I have to predict a score, I'll say:

I'll go a little bit against the grain. I think, with over a month off, both offenses will be clicking out of the gates and each get on the board twice early before the defenses get in rhythm. This game will slow to a crawl in the middle, though, as each team needs to grind out their drives a little bit more and stall out a lot more frequently, with maybe a couple of field goals being exchanged.

Then, as is often the case in college football, a more frantic 4th quarter with a faster tempo and bigger plays, making this championship game one for the ages. I give the 4th quarter advantage to ND to make a few more plays on defense, quite simply because they are the best in the country at limiting big plays and keeping teams out of the end zone. All it takes is being one or two big plays better than the other team, and you are raising the crystal ball, and I think Notre Dame has that advantage.

Also, I think if nothing else, this bowl season has shown us that unlike recent years SEC teams can be scored on, and I really like a Golson and Riddick led offense to continue their 4th quarter excellence and do it against this Alabama defense.

Is the entire staff picking Notre Dame? Oh, we are so screwed.

Okay, I've written enough about this game, so I'll try and keep it short and sweet. Up until two weeks ago I was set on picking Alabama. If you're out there betting money on Alabama straight up that's not a bad idea. But Notre Dame came all this way and they have to win it. You never know when you're going to get back to the big show. It's our time to shine.

I think we're going to see the Irish be super aggressive on offense and leave it all on the field with a bunch of new plays and a lot of up-tempo. As long as the Irish have less than a 14-point lead the offense will be moving way faster than it has all season. Notre Dame will prove tough enough to slow down the Bama rushing game somewhat and each team will have 2 turnovers. Where and when those turnovers occur will be crucial. Should be an awesome game.

Mouth of the South:

After the Pitt win, I wrote that I still had a good feeling about the season and that the Pitt game would do a lot for Irish lore if the season continued its upward trajectory. Well the Irish did nothing to dispel my optimism. In fact, every time my cockeyed optimism has faltered this season--after Purdue, after Michigan, before Oklahoma, after Pitt--the Irish have picked me up, dusted me off, and said "there, there, laddie--we're still undefeated."

So just as I started to doubt whether we could hang with the creme-de-la-SEC, the rest of the country decided that it had had enough of the SEC. The Irish will express that same sentiment on Monday night. The Irish offense starts out sluggishly, but owns the fourth quarter. Meanwhile, the defense gives up yards between the 20's, but the linebackers tackle Lacy and Yeldon, and Air Traffic Control refuses to allow Tide Air to land. Irish become the first team to end the season number one on the field and in the classroom.