5 Recruits from '13 Class to Enroll Early This Weekend

Examining the impact the 5 EE's can have this spring and next fall.

Share All sharing options for: 5 Recruits from '13 Class to Enroll Early This Weekend

The Fighting Irish welcome 5 recruits (it was 6 as few as 18 hours ago but I'm sure you heard) from the 2013 class to campus this weekend. Undergraduate move-in day is this Sunday, January 13th and classes for the semester start on Tuesday the 15th.

National Signing Day is less than a month away before these players are officially joined by the rest of the #IrishMob class and the start of spring practice begins in just 10 weeks.

We'll have plenty of coverage and more in-depth analysis of these EE's and the entire class next month, but right now I wanted to take a quick look at the new freshmen who'll be unpacking their belongings and starting their new life at Notre Dame this weekend.

*Rankings are from 247's Composite

Settle in and get familiar with that playbook. Zaire is a wonderful quarterback prospect but he'll be 5th on the depth chart even as an EE and he's a long way from serious consideration for playing time.

Tear it up on the scout team, continue to work on his passing skills, and keep adding bulk to his frame. Zaire is very athletic so he should excel on the scout team. He also has a good frame to add some weight and creep towards 200 pounds---a goal I think he will meet in a couple years when he's beginning to push for playing time.

Remember the last time we grabbed the top-rated player out of Minnesota who played at CDH? Onwualu is physically ready to compete at this level and if he can prove to be trusted as a blocker I'd bet he'll be on the accelerated Daniel Smith plan, as in someone with good size who will at minimum contribute on special teams.

Count me among those who think Onwualu is a little underrated relative to his rankings. I'm not sure who he'd move ahead of in our class since it's such a strong class, but I think we my look back and say, "James was barely a top 50 wide receiver?"

He's got the tools to contribute as a freshman and being here for the spring can go a long way. If the stories about him are even half true Onwualu will be one of the most athletic and strong players on the team and certainly among the freshman class. Kelly has been loathe to use freshman receivers a ton so far but all 3 from the 2012 class burned a year of eligibility and I see the same for Onwualu.

Hit the weight room and training table with ferocity. Being the son of the Admiral he definitely still has a basketball players lean body. 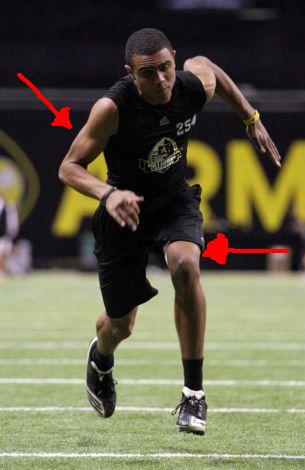 Many are expecting Robinson to grow in to a tight end because of his height but that could be a couple years away. For now he should focus on getting bigger and stronger.

Robinson didn't play in a very competitive league in Texas but he has impressed with this athleticism and playmaking ability at various all-star camps. Still, he's nearly a lock for a redshirt and one of the players from this class who will have to be intensely developed.

I doubt he ever moves to tight end though. Even at 7'1" his father maxed out at a chiseled 235 pounds and I just don't see Corey adding the 40+ pounds to his frame necessary to play the tight end position at Notre Dame.

The loss of Tyler Eifert will loom large and senior-to-be Alex Welch will be making his way back from another injury. That means Heuerman will have an opportunity to get in the mix right away in the spring. He's a little light in the weight department but he does have the frame to be near 230 by the start of spring practice.

Heuerman is a slightly less heralded but very similar type of player to Ben Koyack. The latter found his way on to the field quite a bit as a freshman after the injury to Mike Ragone, and I think Heuerman is going to do the same with 8 months in the program before the Temple home opener.

Even if he's not 240+ pounds Heuerman's athleticism and pass-catching abilities are pretty enticing for a team that is losing Eifert. This isn't a knock on the other tight ends but Heuerman might have the most upside as a receiving tight end.

Elmer was once considered the elite gem of this class when he became a verbal to Notre Dame on September 17, 2011. Talk about being a rock, this kid has been a part of the 2013 class for 16 months!

His stock fell a little bit over the past year but he's still the 2nd best offensive linemen in the class according to the Composite Rankings, plus now Elmer has the opportunity to gain a leg up on his classmates at a somewhat thin tackle position.

Things might depend upon the health of Tate Nichols who had another season ending injury in 2012. With Tate that gives the Irish an entire two-deep of non-freshman tackles. However, if Nichols is not healthy or Lombard is moved inside then Elmer could possibly be a backup tackle in 2013.

Long-term I think Elmer moves to guard. Yes, I know he's huge already for a freshman but two other classmates (Bivin & McGlinchey) are much taller and fit the profile much better. Plus, 'Elmer' is such a guard-sounding name isn't it?