The Evolution of the Brian Kelly Offense, Part III: The Tommy Rees Era

Share All sharing options for: The Evolution of the Brian Kelly Offense, Part III: The Tommy Rees Era

I know, it's been awhile since part two of this series*. I suppose even some of OFD's most loyal readers don't even remember the first two parts.

So let's start with a quick review.

Anyone that watched Cincinnati play in 2009 can easily see that the offense Brian Kelly is running at Notre Dame isn't even close to what he ran with the Bearcats. The purpose of this series is point out the schematic and philosophical changes that have taken place over the past four years.

Here are links to the first two parts:

The 2012 season has just begun, but we're going to hop into the Way Back Machine and revisit the end of the 2010 season and the 2011 season. I know no one wants to actually relive all of that (except maybe the Utah and USC wins in 2010), but indulge me for a little bit. You can resume reveling in Saturday's game afterwards.

In the first two parts of this series, I talked about how important tempo is in Kelly's spread offense. Kelly doesn't do anything unusual schematically; his offense's success is based off of keeping defenses on their toes by running at a hurry-up pace that prevents defenses from disguising their coverages and wears them down.

When Kelly got to Notre Dame, he tried to install that style of offense. However, his quarterback, Dayne Crist, wasn't as efficient throwing the ball as his quarterback at Cincinnati, Tony Pike. To account for that, Crist needed to keep defenses guessing by picking up yards on the ground. But, as we saw in part two, Crist was not very good in the running game. He struggled to make good decisions on the zone read, which kept defenses from respecting his ability to beat them on the ground.

But early in the game against Tulsa, Crist went down with a knee injury. In his place stepped true freshman Tommy Rees. We all know the story: 4-0 to end the season, followed by a much maligned season in 2011.

What I found interesting was the wholesale philosophical changes Kelly made when Rees took over. Schematically, not a lot changed, but Kelly completely abandoned the hurry-up part of his spread offense and slowed everything way, way down.

Rees was the back-up quarterback for much of the 2010 season, so presumably he was practicing the no-huddle spread every day. I know Rees was a true freshman, but it's interesting that Kelly felt like he needed to completely change his offense.

But the defense started to gel and the running game finally kicked into gear, which helped mask a lot of Rees's deficiencies. That trend continued into 2011. Kelly started using more multiple tight end sets and began establishing a strong running game.

That worked for a few games, but started to catch up to Kelly as the season went on.

After Mike Ragone went down with an injury early in the season, the formations became a lot more vanilla - a lot of shotgun and a lot of three and four receiver sets. That isn't a bad thing, but it requires a few things from the quarterback.

First, he needs to make the defense account for him in the running game. With little variation in the formations the offense shows the defense, there needs to be some misdirection to open things up for the running backs.

Second, he needs to be efficient in the passing game. He doesn't necessarily need to be Tony Pike, but he has to be able to complete passes on first or second down and occasionally take some shots downfield to spread the defense out. A quarterback that's a threat to run also helps in this department.

Those two points don't really describe the type of quarterback Tommy Rees is. Kelly tried to lean on the running game to keep the pressure off of Rees, but by the middle of the season, the book was written on how to beat the Notre Dame offense: stop the run on first and second down and force the ball into Rees's hands on third down.

Here's a series of three plays from the Stanford game that visualizes my point. 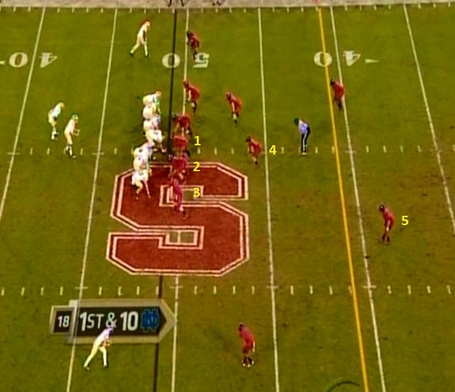 This play takes place on first down. Cierre Wood is lined up to Rees's left.

When running from the shotgun, the running back usually has to run across the quarterback to take the handoff, which tends to tip off the direction of the play to the defense. The way to beat this is to use misdirection with either another player in motion or with a read-option play.

Stanford responds by loading up to the offense's right. The Cardinal have seven defenders in the box against Notre Dame's seven blockers. The defenders on the line are shifted to the right with the linebackers shaded more to the left. If you count the deep safety, there are five defenders to the right half of the field.

Cierre Wood gets the handoff but doesn't pick up any yards. 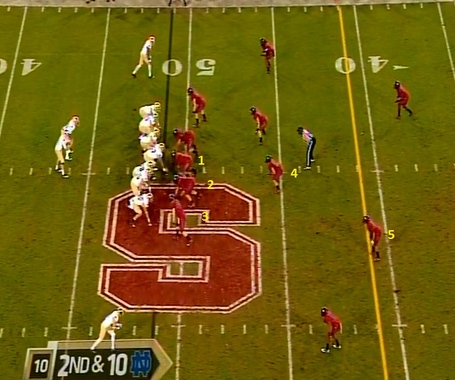 Notre Dame lines up in the same formation, so Stanford lines up the same way as well. Rees hits John Goodman for a gain of six yards. 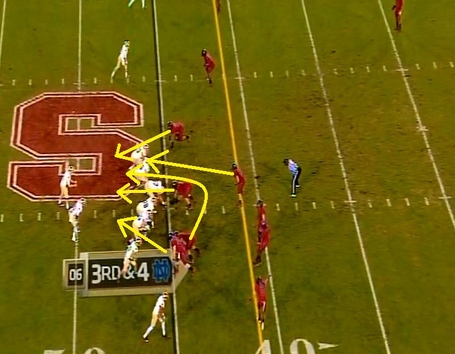 Now it's 3rd and 4. Stanford doesn't need to worry about Rees keeping the ball, so they spread themselves out. With only four yards to go for the first down, Stanford doesn't drop back into coverage and brings the blitz. They get in Rees's face and force a bad throw to an open Michael Floyd.

You can see the problems this offense had with Rees at the helm. With his struggles in the deep pass game and his inability to run the ball, teams could stack the box and stop the run while forcing Tommy Rees to beat them with his arm. Teams had absolutely no reason to respect Rees's legs on read plays or on third down.

Here's a third down against Boston College: 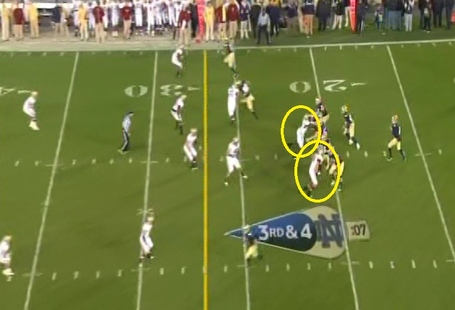 The Eagles rush TWO defenders on 3rd and 4. Instead of tucking the ball and picking up an easy first down, Rees turns and throws incomplete to Robby Toma. I doubt teams would do that against any of the other quarterbacks on Notre Dame's roster.

This defense didn't work every time, especially for the less talented teams on the Irish's schedule, but it was effective for the better defenses Notre Dame faced.

Outside of the crazy game against USF, the Irish were good enough to beat the bad teams on their schedule last year and put scares into Michigan and Florida State, but the limitations the quarterback position put on the offense kept them from being a really good team and competing with the best teams on their schedule.

We're only one game into the season so it's hard to tell how much the offense has changed, but it's clear changes had to be made if Kelly and Notre Dame want to take that next step to become an elite team.