It appears the Massacre at the Meadowlands is fully in Notre Dame's rear-view mirror. After the sloppiest and least prepared game of the Kelly era in 2010, the Irish have now defeated Navy by a combined 82 points over the past two meetings.

This past Saturday in Dublin the Fighting Irish left no doubt who is the more physical and talented team.

50-10 was the score and Notre Dame did the majority of its damage on the ground, going back to a power running game that did not let the team down. On the other side of the ball, the Irish defense took away the fullback dive and got Navy out of their comfort zone on offense.

That led to a comfortable halftime lead with the cruise button calmly switched on in the third quarter.

Full breakdown coming after the jump.

The line straight up dominated again. Last year the Middies rushed for 3.9 yards per rush, but on Saturday they were down to just 3.7 per rush. Navy only mustered 149 total rushing yards as well and basically gave up running for long stretches in the middle of the game.

If we count the outside linebackers as defensive ends in an even front on the afternoon, the line came through with 6 tackles for loss, 3 sacks, and a forced fumble---a nice day at the office against a triple option offense.

The line did their job as well by shutting down the fullback up the middle, being more physical than the Navy line, and constantly being disruptive. I'd probably agree if you said the line could have done a touch better getting after the quarterback when Navy was clearly throwing the ball on nearly every down, but they did enough and let's not forget they did injure the Middies starting quarterback Trey Miller on a pass attempt.

Perhaps it wasn't a coming out party---you'd like to see that against top competition---but Stephon Tuitt and Ishaq Williams both displayed their immense and budding talent on Saturday.

There was a drop-off when the 2nd unit came in led by Schwenke, Day, Hounshell, and Springmann, but they held their own and got some much needed experience. The fact that they came in for reps with plenty of time left in the second quarter speaks to the staff's comfort with getting these players in the regular rotation.

It's a little difficult to rate the linebackers in a game like this with many of them playing in unfamiliar positions, but Manti Te'o shined brightly in his first game as a senior. He finished with 6 tackles (and a huge stop up the middle on Navy's only 4th down attempt) and picked up his first career interception and fumble recovery. 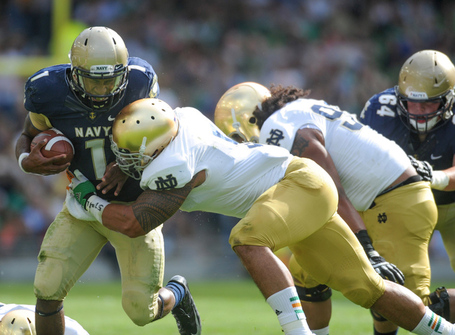 Prince Shembo, who could have been mentioned above on the line, played with explosiveness and great speed. Dan Fox didn't seem to be doing a lot but he ended up tied for the team lead with 7 tackles. The youngsters in Grace and Councell got some quality time on the field and much like the backups on the line they handled themselves well.

Yes, there were problems. However, I'm a little more worried about the safeties than the corners.

We can expect the inexperienced Bennett Jackson and KeiVarae Russell to struggle, especially in man-to-man coverage while left out on islands as they were for the bulk of the first three quarters. Thus, while they are still obviously a big concern for this defense, we likely can't rate these players against a quirky offense playing out of character and in a defense they'll never run again.

Zeke Motta laid the afternoon's biggest hit of the day, but otherwise played like he always has---inconsistent and missing some assignments and tackles. If the secondary is going to be even decent, they'll need improved play from Motta.

With Farley down at the hybrid outside linebacker spot, Slaughter stayed back at his normal safety position. Curiously, there wasn't much out of Slaughter in the game and that was a little concerning since Navy threw for almost 200 yards. I didn't notice much of Farley (just 1 tackle) but I like that he got a ton of experience in this game and Kelly praised him for playing tough assignment football.

Quite simply, this was one of the most dominating performances from an Irish line in years. You might argue that this is how it should always be against Navy, but even some of the best Notre Dame teams have struggled moving the ball on the ground against the Middies.

Not much else needs to be said. We'll see how the line matches up against bigger opponents in coming weeks but they appear to be getting stronger under Brian Kelly. New line coach Harry Heistand deserves a strong hand shake for an excellent debut as well.

Quite a busy day for this group with the amount of blocking they performed. All-American Tyler Eifert led the team with 4 receptions and 1 touchdown, but he only totaled 22 yards in a very conservative passing game. Niklas looks to still be working out the kinks as a blocker but he caught a nice pass from Golson and nearly scored a touchdown. 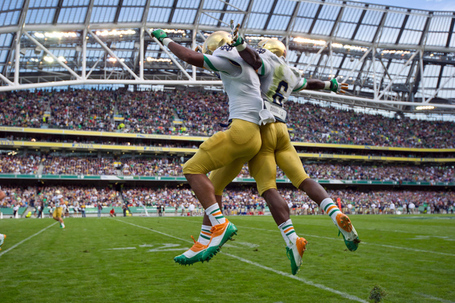 The celebration was on after GA3's long score. Matt Cashore/US Presswire

Koyack's day was hampered by a couple drops, but he picked up a 23-yard reception late in the game and appears to have improved as a blocker.

This group has the potential to be as productive and lethal as the multi-headed monster seen at Stanford in recent years. It's no wonder the offense has been built around them.

There weren't many targets for the receivers in the passing game with the sloppy comeback to Daniels (which he caught but just out of bounds) as the only incompletion. Otherwise, the receivers had 7 receptions on just 8 targets.

Who knows if Goodman's injury was worse than the staff was letting on, but DaVaris Daniels got some early looks and looked impressive with a team leading 49 yards. It's an encouraging sign to see No. 10 make an impact in his first career game.

I was also pleased with Jones' quickness, vision, and toughness in taking a couple screens for nice gains. More of that please. Elsewhere, Justin Ferguson caught a pass late in the game as did Daniel Smith. Davonte Neal only got a couple touches, gaining 7 yards on a reverse and losing 5 on that Dana Holgorsen-inspired tap-pass while in motion which is technically a pass reception.

Once the offense starts to open up I think we'll be pleasantly surprised by this group. There is a lot of young talent and speed.

I was little worried that this group would look merely "good" without Cierre Wood, but they played lights out. In fact, Riddick looked an awful lot like Cierre out there on Saturday. He wasn't tentative, he ran hard with good vision and he was the workhorse that drove the offense against Navy.

George Atkinson's 56-yard touchdown run was electric and he protected the ball, which was a concern. With a handful of other nice runs he's shaping up to be a tremendous young back. 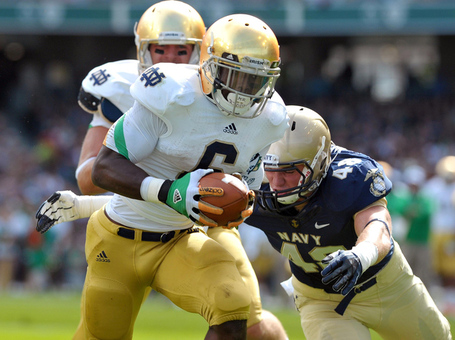 Riddick looked like a No. 1 back. Matt Cashore/US Presswire

Cam McDaniel proved why he's a playmaker who needs get some reps here and there with a solid 60 yards on just 9 carries, while also adding a 20-yard reception. And let's not forget Robby Toma's 9-yard touchdown run near the end of the game as well.

There should be plenty of smiles on Irish faces that the backs were this deep and talented without the starter making the trip.

Good but not great start by Golson for his career, though he wasn't asked to do a whole lot

He wasn't asked to run the ball, nor did he challenge Navy down field or have to rely on his receivers to move the chains. He did show maturity in being able to run the offense and you have to like the fact that he looks very comfortable in the offense.

I would have liked to see Golson do a little more given his skills, but that's mostly the coaches holding him back for now. The interception was a lazy throw and for as good as he can be right now, we'll probably see one of those throws per game.

The highlights are that he was accurate (66% completion with a couple drops and two completions just a touch out of bounds) and he's a weapon throwing on the run. His accuracy, touch, and velocity on the short screens and swing routes were also a big benefit for the offense, where again, Golson just fits the offense better.

I'm very excited to see what the offense can do, particularly the running game, when Golson starts carrying the ball.

There was a time when I was very high on Andrew Hendrix, but he continues to look like a raw kid out of high school. My biggest worry is that he's cursed with tunnel vision, and poor vision overall. He still struggles going through his progressions, panics quickly in the pocket, and continually misses holes when running the ball.

A lot of football left in Hendrix' career, but he's going to have to step up if he wants to remain the backup this year. 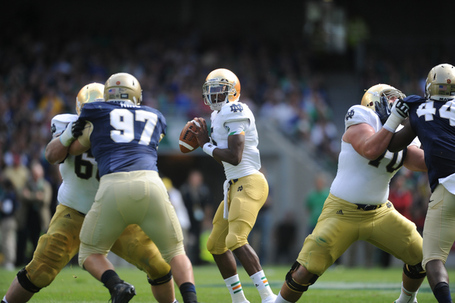 So it begins. Barry Cronin/Getty Images

Besides the missed PAT and another failed PAT due to the holder not doing his job and holding the ball, there's not much to complain about with special teams.

Tausch hit his only field goal and one of Turk's two punts went inside the 20-yard line.

The kickoff coverage was okay, but not great. Nevertheless, the team continues to arrive in a bad mood when they get to the ball carrier---a continuing staple of Kelly's teams at Notre Dame.

I hate the new kickoff rule and it limited GA3 to just one return, and it didn't help that Navy rarely scored. Still, many kickers are going to try and take Atkinson out of the game if they have the leg to do so.

Davonte Neal got some good experience at punt returner fair catching one ball and dangerously scooping up another one and racing ahead for 11 yards. It's life on the edge back there, so get used to it. At least he's going to be explosive.