Walking the Walk, Part II: The Unfamiliar Faces of the Fighting Irish Offense

In Part II of Walking the Walk, we bring you profiles of the ten walk-ons on the Notre Dame offense, student athletes whose impact on the Fighting Irish football team is meaningful, and yet too easily overlooked.

Share All sharing options for: Walking the Walk, Part II: The Unfamiliar Faces of the Fighting Irish Offense

From Rudy to Ruffer, walk-ons have long held a storied place on the Notre Dame football team. Walk-ons work hard, day in and day out, alongside the starters, making them better, without the glory (or many of the resources) that comes with the scholarship. They aren't on the NBC broadcast; they don't run with the first team in practice (though they may get worked by them); they don't line up on first down when the game begins. But they are, nonetheless, a crucial part of the Fighting Irish football team, and they have names and stories and roles to play in getting Notre Dame to game day.

In this two-part article, we consider the role walk-ons play and profile your Notre Dame Fighting Irish walk-ons for the 2012 football season. In Part I, we brought you profiles of the twelve walk-ons on defense and our one walk-on specialist and tipped our caps to WOPU (the "Walk-on Players Union") Nation. You can read about those players here.

Here in Part II, as we go through the season's bye week, we bring you profiles of the ten walk-ons on the Irish offense.

You might be surprised by just how much there is to say - and by how well worth your time it is to get to know these Notre Dame football players. 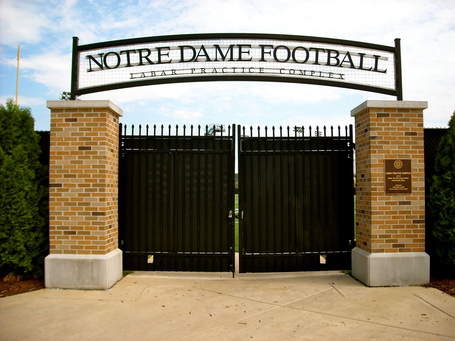 Fiessinger is our fifth quarterback, straight out of Andrew Hendrix's Ohio alma mater, Archbishop Moeller. He has caught and will catch a lot of air time on NBC this fall as he signals in Brian Kelly's plays to the offense (currently alongside QB-turned-WR Luke Massa) - Fiessinger is the new commander of the "Red Army," stepping into Matt Mulvey's shoes. You saw Fiessinger on ND Athletics's August 5th practice report video, practicing signaling plays in to Everett Golson under the tutelage of Luke Massa. Last season, Fiessinger watched the Irish from the stands. This season, he'll have the best view in the stadium - standing at Coach Kelly's side from kick-off to the final whistle.

Matt Tansey was a two-way standout lineman, wrestling team captain, and lacrosse player at Governor Livingston High School. Tansey - or perhaps more appropriately, Midshipman Second-Class Tansey - is a member of the Navy ROTC and will serve as a Naval officer after graduating from Notre Dame. Chris Terono spoke with Tansey before the 2010 Sun Bowl game: "This has really been something special; to be a part of this team that has so much history," Tansey told him. "I haven't had a chance to play yet, but its just an honor to be here. I'm very lucky....There really is no difference between the starters and non-starters here. Everybody makes you feel like a part of this team. I'll be walking the halls and you're just as likely to get a 'hello' from the starting quarterback as you would from anybody else. I don't feel like a practice-squad guy."

Josh Anderson, of Notre Dame High School (Dayne Crist's Alma Mater, in the same league as Cierre Wood's and Jimmy Clausen's high schools), played fullback, tight end, and defensive end and was named Junior Athlete of the Year and All Serra League 1st Team in 2011; he was also a very successful shotputter.

Gerard Martinez played at quarterback, punter, and holder at Cimarron Memorial High School, where he was named 2012 2nd Team All-Conference QB and excelled in the classroom - Martinez was valedictorian of his high school.

Dennis Mahoney graduated from Boys Latin School where he served as student body president and received all-conference honors for his O-line play while maintaining a 4.2 GPA. He will soon graduate from Notre Dame with a degree in history and law school plans. He's already played a key on-field role for the Irish: in his very first play for Notre Dame, Mahoney made a big block to spring Andrew Hendrix's much-enjoyed 78-yard run on Air Force in 2011. The Baltimore native was rewarded with making the travelling team for his first road game when the Irish played Maryland last season. He's lived and labored as a walk-on for the Irish for four years; 2012 will be his fifth and last. Mahoney loved and longed to attend Notre Dame from the time of his first visit, when he was just six years old, and his parents have done their best to be at Notre Dame for all of Mahoney's home games.

Eric Lee, a preferred walk-on at the slot position, helped lead his Dowling Catholic High School team to a state title his senior year as team captain, catching 11 TD passes and scoring several more on special teams, plus bringing down 6 INTs as a DB - the guy never left the field. Lee was simultaneously the starting second baseman on the baseball team, starting point guard and team captain on the basketball team, and ran sprint races on the track team - all while maintaining a 4.1 GPA. Lee is one hard worker, and if he keeps at it, may contribute in-game for the Irish. 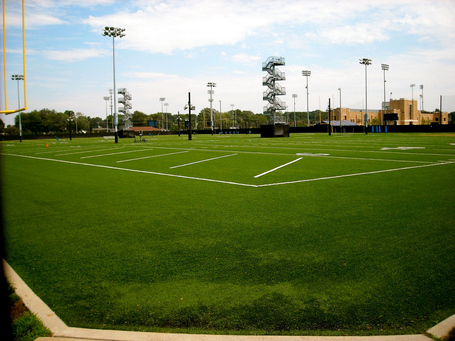 Dan Furlong was a two-sport star for Orchard Lake St. Mary's, playing both basketball and football. His high school football team won the 2011 D3 state championship with Furlong at left tackle and as captain of the o-line. He also helped take his school's basketball team to back-to-back Class A regional titles.

Tyler Plantz walked on in the spring of 2011 amid concerns about depth at the running back position - only 2 scholarship RBs were left after Cam Roberson's knee injury. According to Eric Hansen at the South Bend Tribune, Plantz, son of former Irish and Indianapolis Colts offensive lineman Ron Plantz, was a standout linebacker and sometime fullback at Providence Catholic High School. Plantz played tailback for the Sorin Hall intramural team during the 2010 season, played for the ND rugby club, and fought in Bengal Bouts in 2011, making it to the championship round in his weight class. According to Plantz's father, Tyler "was recruited by three or four of the Ivy League schools for football and one of the smaller MAC schools, but his dream was to walk on at Notre Dame. Now here it is." Here it is, indeed.

Andre Smith, of North Broward Prep, joined the Fighting Irish just this past spring and made his mark during spring practice: when Goodman sat with an injury, thinning an already inexperienced receiving corps still without the recently-arrived freshmen, Smith caught passes from Golson in the coaches' clinic day scrimmage. Wes Morgan of Blue Gold Illustrated has the quote of record from QB Andrew Hendrix on Smith: "He does look the part. He made a one-handed catch yesterday and some ridiculous jumping catches and he even laid the wood one time in the kickoff drill today. He's been really impressive. He's fast, and it will be interesting to see how he develops."

You have seen Nick Fitzpatrick play. He snagged Gunner Kiel's first pass in Notre Dame Stadium, for 11 yards, at this year's Blue Gold Game. Fitzpatrick was given honorable mention as a kicker for the AP's Indiana 3A All-State Team in 2008 and played at both kicker and receiver at local Marian High School. He is also the shortest player (as listed) on the roster, checking in at just an inch shorter than Robby Toma and Davonte Neal; he's the lightest player, by a pound, as well (at 170; the lightest scholarship player is Davonte Neal at 171). Size hasn't stopped Toma or Neal, though, and it hasn't stopped Fitzpatrick from playing with the Irish.

In fact, according to Manti Te'o himself, Fitzpatrick played a crucial role in preparing the defense to face Michigan's Denard Robinson. As noted on UND.com, when a reporter asked Te'o if "there [was] something you saw on film that made you think you could get to [Robinson] and rattle him?" the linebacker replied, "Talking about that, I want to give a big shout out to Nick Fitzpatrick. Better write an article about Nick Fitzpatrick. He was our Denard for the week on our scout team, and he's one of my good friends, and he did a wonderful job in trying to duplicate what Denard does. He was running all over the field, and he gave us a great look along with the rest of the scout team. Definitely we were prepared. The coaches watched that film and drew up a great scheme to help us win, and the scout team headed by Nick Fitzpatrick really prepared us for today." You couldn't ask for a clearer shout-out than that.

The 23 walk-on players on the Notre Dame football team are each worthy of note. As the Irish take the field this fall, you will know a bit about their journey to game day; you will know some of those players who've labored alongside the starters to get them there - who have walked the walk - even if they their impact goes, for the most part, unnoticed.