The Irish were expected to run all over the Wolverines but didn't. It's not time to panic, but I hope you love Tressel Ball.

Share All sharing options for: Michigan Review: At Least We're Running The Ball

The offense hasn't been very good this season.

That should be obvious to anyone that has watched a Notre Dame game that has taken place on US soil. There are many reasons for this:

Those last two points are the ones I'll focus on today.

The offensive line was thought of as a strength coming into this season. Zach Martin and Braxton Cave are three year starters, Chris Watt is in his second year starting, Christian Lombard was highly rated coming out of high school, and Mike Golic started some games last year. With a lack of proven playmakers in the passing game, it seemed like Notre Dame would lean on the running backs this season.

But outside of the Navy game, the running game has been very disappointing. Purdue and Michigan State have very good front sevens, so struggling in those games can be forgiven, but playing Michigan seemed like a good opportunity to right the ship. Michigan's defense had been, until Saturday, pretty terrible against the run and the Irish gashed them for 198 yards and 6.0 yards per carry last year.

But that wasn't the case, as the Irish failed to crack the century mark in rushing yards against the Wolverines.

So the inevitable question is: why?

Of course there's several reasons for that.

The first is execution. Kelly has mentioned this in his press conferences, but it seems like on every play there's one missed block that blows the play up.

These two plays sum up this issue:

In the first play, Notre Dame runs a counter. Zach Martin pulls around and Cierre Wood reverses direction after taking the handoff and follows Martin. 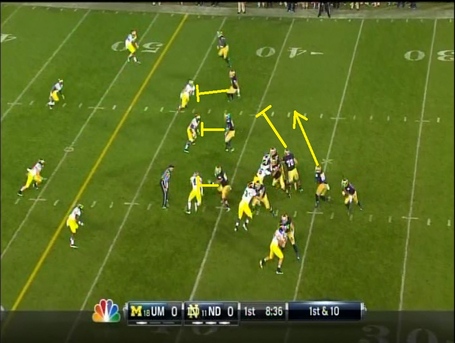 Everything looks great here. The right side of the line has sealed the edge and Wood still has Martin as a lead blocker. 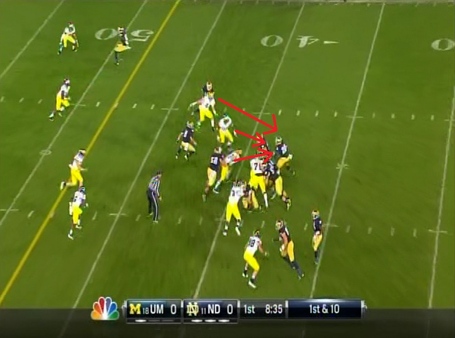 But then Cave, Robby Toma, AND Ben Koyack all whiff on their blocks. Zach Martin is awesome but he's pretty much powerless against three defenders. Wood gets crushed under a pile of Wolverines.

In the second play, the Irish are in the redzone and have their jumbo package in with three tight ends. The Irish run power O. Mike Golic pulls from his guard spot to lead the way for George Atkinson. 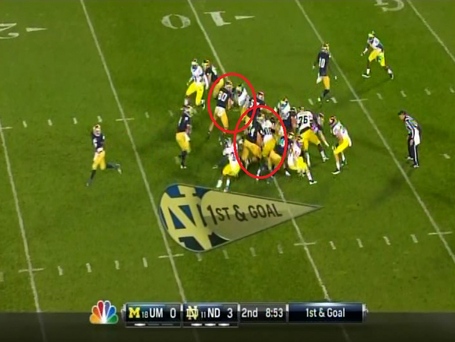 Again, this play had a lot of potential. Golic, Cave, and Watt (until he falls down as well) make very nice blocks and Davaris Daniels does a nice job on the safety. If Atkinson gets through the hole, he might have walked into the endzone.

But it wasn't all execution; it was also scheme - from the Michigan side and the Notre Dame side.

After Kelly pulled Golson and went up two scores on a Tommy Rees rushing touchdown(!), Kelly pretty much packed it in and spent the rest of the game calling run plays. In the second half, the Irish ran the ball sixteen times and only threw it seven times.

Michigan was having none of that and decided Notre Dame would not run the ball.

Look at the defensive alignment. 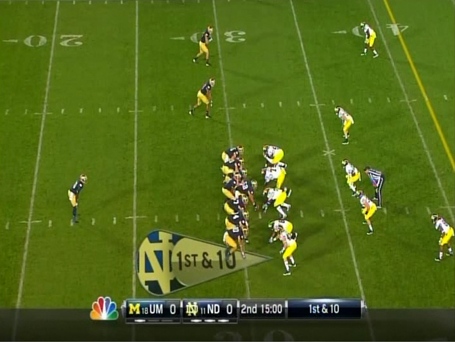 Michigan has five men on the line with the other two linebackers five yards off the line of scrimmage. One of the safeties is creeping down to the line and the other safety is only offering up token coverage to the slot receiver. Look at how far inside Jordan Kovaks is lined up relative to Danny Smith. Greg Mattison might as well be holding up a giant sign on the sideline that says "THROW A BUBBLE SCREEN I DARE YOU."

Brian Kelly, meanwhile, saw that sign, looked at the scoreboard and then to Stephon Tuitt and Manti Te'o, and decided to keep ramming his running backs into brick walls. To the offense's credit, they still picked up some tough yards and kept the clock rolling, but that just looks like free yards Michigan is handing out on a silver platter. 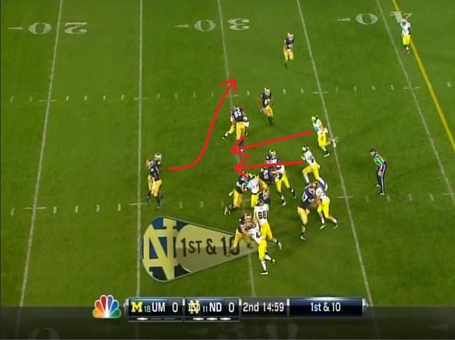 You can see the problems this created in the video. Golic misses a block on the backside and Troy Niklas definitely got away with a hold, but the blocking is decent overall. But Kovaks is lined up so far inside of Smith that he has no shot at blocking him. Kovaks forces Wood outside and Cierre manages to pick up four yards out of that.

So that's pretty much why Notre Dame ran for less than 100 yards. Michigan played tough on the lines and the linebackers had a pretty good day, but the blocking was sloppy and Brian Kelly had no interest in throwing the ball. I suspect if Michigan had scored a touchdown at any point we would have seen Kelly open things up, but he wanted the defense to win the game and Denard Robinson was happy to oblige.

This isn't directly related to the outcome of the game, but Notre Dame showed something they haven't done this year - shifts by both tight ends from one side to the other. These type of wholesale formation changes were a staple at Wisconsin under Paul Chryst. The goal is to simply give the defense a different look right before the snap to create some confusion.

Schematically, the Irish didn't do anything new; both runs were standard outside zones. But you can see Michigan was not ready for those shifts at all. If Notre Dame could have gotten the snap off sooner on those plays, they could have caught Michigan horribly out of position. This is the first time I've seen this done under Kelly, so I can forgive them for not getting the snap off right away. I hope we see more of this because it could be a useful tool in the future.

Finally, let's end with Riddick's big third down run that iced the game. 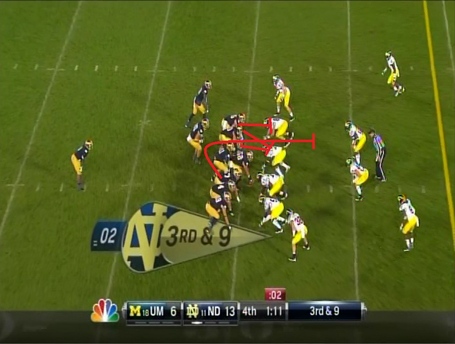 Notre Dame is in their jumbo set again. Michigan has ten men within ten yards of the line of scrimmage. This is the definition of selling out against the run. The Irish run power O. 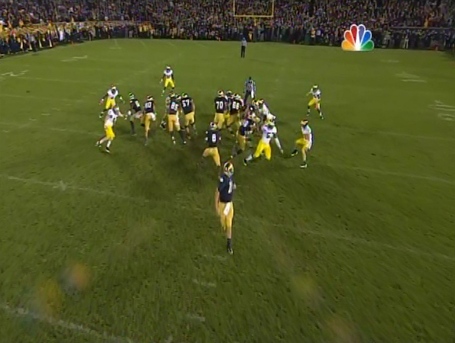 A lot of good things happen on this play. Martin and Watt get a nice double team on the tackle and block him into the linebacker. For good measure, Cave throws a cut block on the linebacker and takes him out of the play. Niklas gets a great kick out block on the defensive end and provides a nice lane for Theo Riddick. Lombard and Koyack hold off the backside. The Michigan linebacker overruns the gap and Golic seals him off. Riddick bursts through the hole and drives forward for the clinching first down (with the help of a generous spot and the Michigan sideline calling for a measurement).

The bye week couldn't have come at a better time. Kelly and Chuck Martin can sit down together and evaluate the offense. The offensive line can spend some quality time with Harry Hiestand and go over the finer points of his zone blocking scheme. And Everett Golson can spend a little more time in the film room going over his mistakes.

There's still a lot of potential in this offense and things will hopefully start to click soon.