8 turnovers and a whole lot of defense later, the Fighting Irish finally defeated the Michigan Wolverines.

It wasn't pretty, especially on offense, but Notre Dame sits at 4-0 heading into the bye week and moved up one spot to No. 10 in the country in the AP poll.

Let's break down the each unit from this past Saturday night's victory.

It was a bit of an up and down game for the Irish defensive line, but they won the day more often than not. They came out from the start and smacked Michigan in the mouth, but the Wolverines did counter with some good protection on a couple of long-ish drives.

But when it mattered, this unit stepped up big time. More importantly, the line was eating blocks in a clinic of the 3-4 defense which allowed Notre Dame linebackers to be very disruptive for all four quarters.

I was somewhat disappointed with RB Toussaint's production (58 yards on 13 carries) but that is nearly all due to Robinson's threat as a runner stringing out some of those read plays. Any time Michigan tried a simple handoff to a running back it was the same answer as last year: LOL, NO.

Counting Prince Shembo, the line had three more sacks and that will keep Notre Dame in the top ten nationally in that category. Tuitt added yet another and freshman Sheldon Day added his second of the season. With more quality minutes from backups in Schwenke and Springmann this line continues to be one of the country's best.

This was probably the best back-to-back performance by the Irish linebackers that I've seen in years. A lot of that has to do with Manti Te'o (8 tackles, 1 TFL, 2 INT's, and only credited with 1 QBH although it was really more like 6), but you can tell Danny Spond brings so much to the table from the drop linebacker position.

Spond was sharp again in coverage and moves very well on the edge for a 250-pound athlete. His forced fumble was likely one of the two or three biggest moments of the game because Michigan was definitely taking the momentum away from the Irish at that point.

Fox and Calabrese also had strong games as well. I often like to think the linebackers are doing well when we don't see a whole lot of mistakes from this duo in the middle, but they've actually stepped up and made plays in recent weeks. We're so spoiled!

We're still waiting to hear more from Ishaq Williams aren't we? Since the Navy game he's been awfully quiet and from what I've seen he is seeing the field often enough. Let's hope he starts making more plays in the future.

A resounding success on the night for the Irish secondary. Robinson only completed 13 passes and the vast majority of those were in the middle of the field on a lot of crossing routes. In fact, I can't recall a pass that was completed where someone in the secondary made a really egregious mistake.

Mayock highlighted Bennett Jackson making the wrong decision on a high-low read on the sideline, but that's forgivable---especially when Jackson had the best game of his career with a team-leading 9 tackles (team-leading 6 solo stops as well), to go along with a fumble recovery and interception. 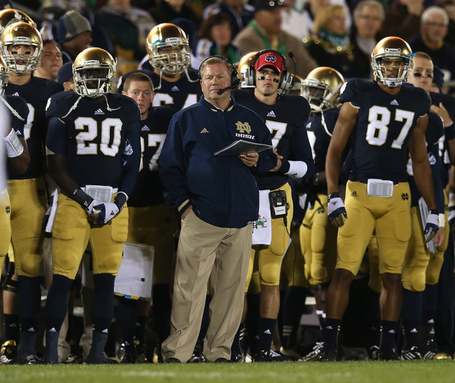 BK has been in chill mode all season. Jonathan Daniel/Getty Images

I'm so impressed with this unit's ability to stick to their assignments, but most of all their physicality is downright shocking right now.

We know Motta can lay the wood---and what a freaking great season he's having by the way---but it's hard to think that newcomers in Farley and Russell bring more physicality to the secondary than what this team has had in the past. There were a couple of really big hits on Saturday that I believe really sent a message to Michigan's receivers and set the tone early. Actually, the whole defense's tackling was phenomenal---no small feat against Denard Robinson.

Here are some thoughts on the struggles of the offensive line...

The right side is still a weak-link and likely will be all season, they're missing some assignments (may still be adjusting to the new zone blocking?), and the offense/gameplan isn't doing them any favors.

I'll just focus on the latter problem, which I think is the most concerning.

Notre Dame is a shotgun spread offense but we're trying to have our cake and eat it too with long stretches of games going under center and 'pounding' the ball on the ground. Maybe it's the NDNation coming out in me, but that's not our identity and I highly doubt there's been enough practice by the linemen to make it so.

Add in the fact that there isn't a down-field threat like Floyd anymore (and still quarterback issues), the tight ends are average blockers, and the gameplan has been going into hyper-conservative mode the last two games, and it's not really that surprising that defenses are having success stopping the run.

I know they didn't play well but I'm oddly in a mood where I'm not going to overreact...yet. The offense was painfully one-dimensional for most of the game, Notre Dame did rush for nearly 100 yards, and yet again they came through with some big runs late in the game.

I'm just going to throw it out there that the football gods are really making Tyler Eifert earn his all-time receptions record over former Irish great Ken MacAfee. Just one catch (but it was a huge one to seal the game) over his last two games is pretty astonishing. Nevertheless, Eifert's blocking is making him earn his elite tight end status.

There doesn't seem to be anyone playing more poorly on the whole this season on offense than Ben Koyack. To me, that means you have to reconsider this whole 2 and 3 tight-end set offense that Notre Dame is running. If Koyack is struggling with blocking and a non-entity as a receiver, he shouldn't be taking a spot on the field instead of someone like Robby Toma.

To a lesser degree, the same goes for Troy Niklas. He's improved his blocking but the game could have played out differently on offense if he comes down with that great throw by Golson in the end zone. It may be a tad harsh but the Irish have built a large part of the offense around these guys blocking well and producing on the field and it's not working very well right now.

Not much to talk about, really.

TJ Jones is really impressing me with the strength and skills on the outside. I'm pretty shocked actually. If ND can ever get consistent quarterbacking it seems like Jones has figured out how to play the position at a high level and make plays on the ball, and he could be a legitimate weapon in the offense.

Three more catches by DaVaris Daniels who is quietly leading the team in receiving yardage---albeit by just a single yard over Tyler Eifert. It feels like we have a big incomplete grade for all the receivers through four games and this game was no different.

I'm a little perplexed at the lack of playing time for Cierre Wood.

Yes, Riddick ran hard and gained some tough yardage, but I don't know why you went away from a guy averaging almost 2 more yards per carry. I suspect the coach's have fallen in love with Riddick's versatility (he did lead the team with 5 receptions) and that Wood might not be completely in game shape, but I'm handing the ball to Cierre way more than 7 times.

Also, this was a tough showing for George Atkinson with 4 yards on 4 carries. Do you try to get him more carries? I'd say 4 or 5 per game is just about right for GA3---there's not much you can do about that right now.

Winning does a lot of positive things, and it definitely has me a lot more comfortable with the QB situation than I otherwise would be. 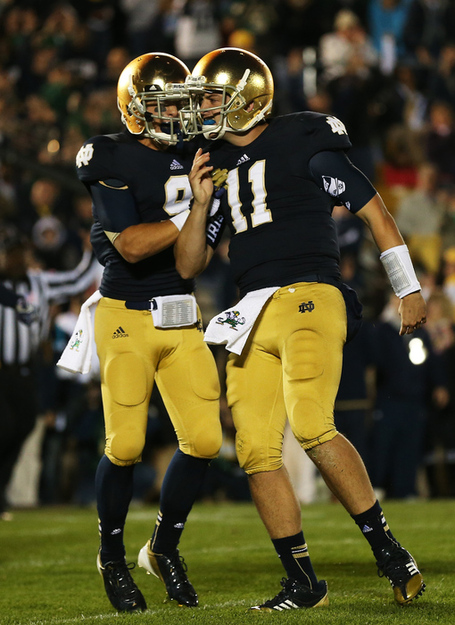 First, I have as big of a man-crush on Golson as anyone, but I love, I repeat LOVE, having Tommy Rees in the come-off-the-bench backup role. To me, this was the role he was born to play as the smarter more experienced veteran on the team with a weaker skill-set.

I share in the concern about Golson's confidence level moving forward but I also would bet he's doing fine knowing A) He's constantly getting support from Coach Kelly immediately after the game, B) He's getting starter reps in practice, and C) The other players surely support him, believe in him, and realize his immense talent.

Going forward, I'm okay with this setup as long as Golson performs competently---and I'm sure he will turn it around. When you throw that heinous of an interception as Golson did in the end zone, you deserve to ride the pine.

I'm not sure if it's by design or not, but I would boot the ball in to the back of the end zone on every single kickoff. The Irish coverage has been iffy, and I'm perfectly fine with placing the ball on the 25 and forcing teams to drive 75 yards on this defense.

Kyle Brindza does deserve a lot of credit for his clutch field goal kicking. A bad game on Saturday could have turned this one into a loss. What's more, he's probably inadvertently forcing Nick Tausch not to be offered a 5th year in 2013.

As I mentioned in the open thread, Ben Turk is the worst good punter I've ever seen. He seems to have improved over the years, but he's always been inconsistent with two solid games, one great game, and then one bad game. Rinse and repeat. There were some indications that he was turning a corner this year but Bad Turk showed up again on Saturday.