Notre Dame vs. Michigan: Feathers In The Cap and Black Eyes

Share All sharing options for: Notre Dame vs. Michigan: Feathers In The Cap and Black Eyes

Not this time, Mr. Robinson. You have been a worthy adversary, and so I tip my hat to you, but not this time. This time Tommy Rees ices the Irish victory while you sit helpless on the sidelines. I wish I could say that I enjoyed the time we've spent together on Saturdays in the fall, but it has been a little too exciting for my tastes. So it is with great relief that on behalf of Irish fans I bid you adieu, and close the book on our shared history. May you now wreak havoc on someone else's cardiovascular health. I thank you for a fine evening. Good day, sir.

Feathers In The Cap

Te'o. He finally got the better of D-Rob, and notched another win before heading into what promises to be the emotional bye week of his career. I hope he realizes how much all those lei-wearing fans love him. God bless ya, kid.

Defense. Does anyone notice a trend developing? The defensemen held Shoelaces to 6 points. The defense shut down the run and got in Predator's face early and often. Good job, men.

September. The Irish have finished the first quarter of their season undefeated. They've allowed 36 total points over four games in September--that's nine a game if you're using science, and I am. And it ain't like the Irish beat up on Florida International or some other rent-a-win school with name that sounds like some two-bit regional airport. The Irish held Navy and three B1G question mark opponents to an average of 9 points. This is impressive even though the B1G is not.

Final Offensive Drive. The boys needed a first down and they got it to ice the game. It wasn't a pretty offensive performance, but we again took care of business to close the game.

Theo Riddick. He continues to do a thankless task in grinding out very tough yards without a ton of help from the line. There's a special place in heaven.

Zeke Motta. Ol' Zeke's taken a lot of flak on this website, but he has been a rock this season in a ridiculously depleted secondary.

Tommy Rees. He did what we needed him to do to win the game. Good for him. 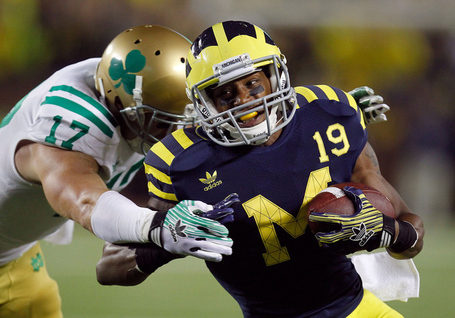 Playing down to the competition. The team apparently did not read the six simple words I've been typing all week: it does not have to be close. I mean the seven simple words: it doesn't have to be close. Right. Well, they didn't listen. Yeah it was Michigan, but so what? Michigan will always be dangerous with D-Rob roaming the field, but shoelaces aside, this Michigan team just lacks playmakers on either side of the ball, and it was all we could do to eek out a 7-point win. Better than a 1-point win. Or a 1-point loss. Anyway, the Irish got through September--and more importantly the Michigan portion of our schedule--without stubbing a toe. This... this I like.

Offense. I'll leave the x's and o's to Burger, but I know a few things. We have a lot of talent on offense. Michigan does not have a lot of talent on defense. Michigan's defense still held us to thirteen points. I get the feeling that Michigan is doing more with less. This... this I don't like. Where was Roby Toma this week? Where were the crossing routes? Where were the tight ends? If they're stacking the box and expecting us to run to kill the clock, why didn't we hit the tight ends off of play action? We just have GOT to do something to open up the run game. Whether its making people pay through the air, using more misdirection, throwing some zone-reads in there, using our matchup-nightmare tight ends, or just going out and getting a highly-touted, veteran offensive line--nevermind, got one of those already--I don't know. But we should have been able to score more points on what is not a good Michigan defense. I get the impression that Greg Mattison outcoached our offensive coaching staff. All that said, I respect that Coach Kelly just did what he had to do to win the game, style points be damned. I probably wouldn't be too happy if EG or Rees had thrown a pick-six to send us to OT. I'll take this win.

Here's what I hope. I hope we get our offensive--ahem--stuff squared away during the bye week, get our confidence up and find an identity in a nice scrimmage against Miami, and build up some momentum before a very tough Cardinal team comes into Notre Dame Stadium.

All in all, though, this was another great win for the team. They put away the skunks and D-Rob and exorcised some losing demons. They just need to start playing up to their incredible potential on offense. Readers?