Share All sharing options for: MSU Review: Let’s Talk About The Defense

Remember when Charlie Weis was the coach at Notre Dame? No? Well, I can't say I blame you.

One of the (many) problems with the Weis regime was Weis's inability to run the same defensive system more than two years in a row.

In 2005 and 2006, the Irish ran a 4-3 defense under defensive coordinator Rick Minter. Minter was replaced in 2007 with Corwin Brown, who installed a 3-4 scheme. In 2008, Weis brought in Jon Tenuta as an assistant head coach. Weis then named Tenuta and Brown co-defensive coordinators before the 2009 season and the defense switched back to a 4-3.

The result was a jumbled mixture of players recruited for a number of different defensive systems. There was a lot of talent but inconsistent coaching stunted the growth of a number of players (sorry Brian Smith and Kerry Neal).

But Brian Kelly has had one defensive coordinator: the always interesting Bob Diaco. He's put a system in place, recruited players to it, and the fruits of his labors are paying off. The Irish defense has gone from a laughingstock in 2009 to the team's strength three years later.

We saw that on full display last Saturday against the Michigan State Spartans. The Irish held Michigan State to 237 total yards, just 50 net yards rushing, and only three points. This was maybe the best defensive performance Fighting Irish fans have seen in years.

So let's spend a little bit of time highlighting the defense's performance.

The number one priority of the Irish defense last Saturday was to take away the Spartan running game. This game was mostly defined by the Irish defensive linemen winning their individual battles on every play, but Bob Diaco still had a couple tricks up his sleeve.

One of the first things I noticed was the alignment of the Dog linebacker.

Look at this play from the back. 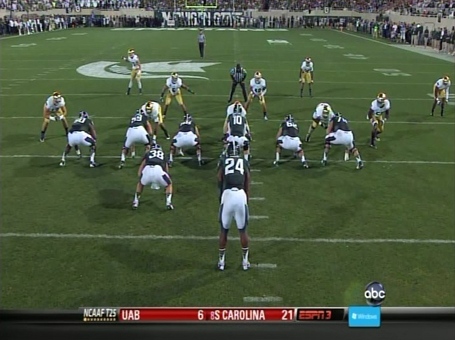 Prince Shembo (and Ishaq Williams on occasion) spent almost the entire game right on the line of scrimmage, both standing up and with a hand on the ground. The defensive linemen were in their usual spots pretty much the entire game: the nose tackle lined up over the center and the ends lined up over the offensive tackles. But when Michigan State lined up without a tight end to the short side of the field (like in the picture above), you can see the problems this created.

Both the linebacker and end are lined up over the tackle. This forces the tackle to block Shembo, which leaves Kapron Lewis-Moore for the guard. If the play goes to that side of the field and Louis Nix two-gaps correctly, he's going to be left one-on-one with the center. This is an obvious advantage for the defense to that side. 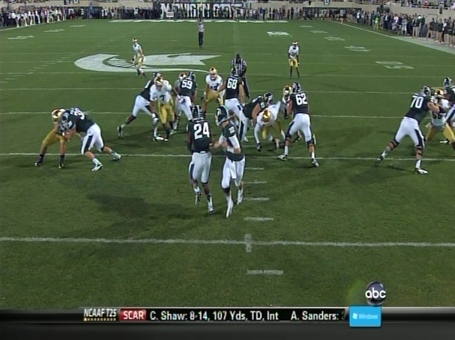 On this particular play, Michigan State runs to the other side, but it doesn't matter. The offensive line gets a pretty good push on Nix and takes him out of the play, but Stephon Tuitt sheds his block easily and he and KLM hold Bell to a gain of only one yard.

Diaco also brought a little bit of heat in this game. He didn't call a lot of blitzes, but when he did they were usually effective. 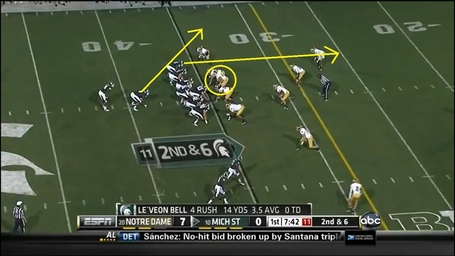 There's nothing fancy about this alignment. Carlo Calabrese is lined up right between Kona Schwenke and Kap.

Michigan State calls a play-action pass. The tight end runs down the seam while the fullback slips out into the flat. 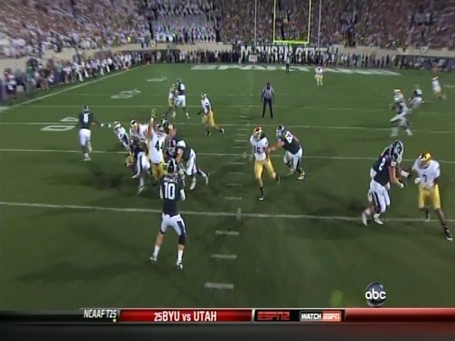 You can see that the play-call was perfect. The fullback is wide open in the flat and could have easily picked up the first down.

But Carlo overpowers the guard and gets into the backfield. Schwenke also makes a nice move on the center and comes free. Neither one gets to Andrew Maxwell, but Maxwell panics and throws a sloppy pass that the fullback can't hold on to.

But as I said before, this game was more about individual performances than about scheme. Here's another example:

This play looks like it's designed to go right up the middle. The two interior linemen are double teamed with two of the linemen releasing to block the middle linebackers. 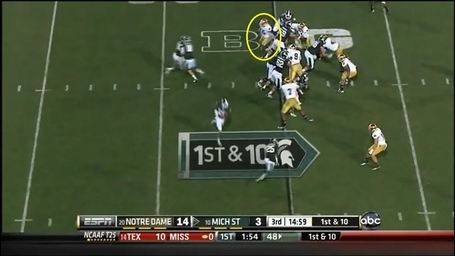 This play is obviously off to a bad start. Dion Sims, the tight end, barely lays a hand on Shembo. KLM is blocked and one of his blockers gets to Dan Fox. Things don't go as well on the other side. 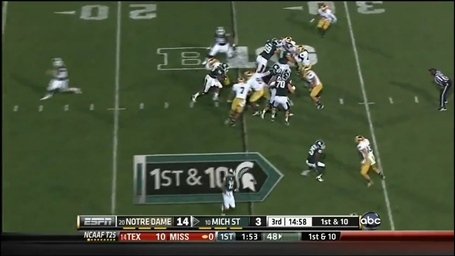 Nix slips past his double team and Shembo redirects Bell right into him. Tuitt, who was chipped at the beginning of this play and shouldn't have been involved in any way, converges on Bell as well. Bell can only salvage two yards.

The last thing I noticed was how aggressive the middle linebackers played. Manti Te'o and both Calabrese and Fox typically lined up in the middle of the formation and both attacked the ball aggressively on every play. 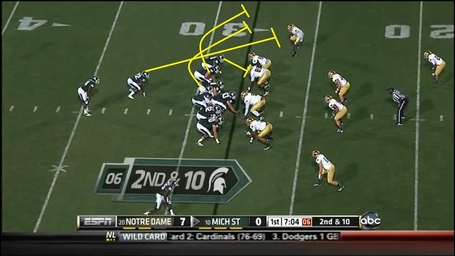 On this play, the play side guard and tackle pull and lead the way along with the fullback to the outside. The goal is get a ton of blockers to the point of attack. The fullback blocks the outermost defender - KeiVarae Russell here - and Sims, the tight end, takes KLM. 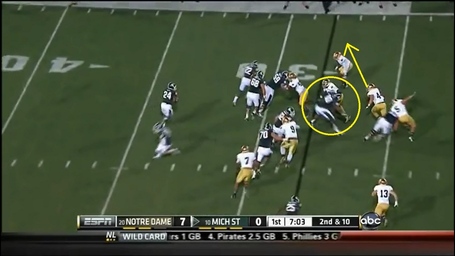 Sims - who struggled mightily with his blocking on Saturday - whiffs on KLM. The center tries to take on both middle linebackers and misses both of them. Russell and Shembo are blocked, but KLM takes away any cutback lanes for Bell who is forced to keep stretching the play outside. Calabrese is untouched and forces Bell out of bounds for minimal gain. Just look at the number of white jerseys around Bell. 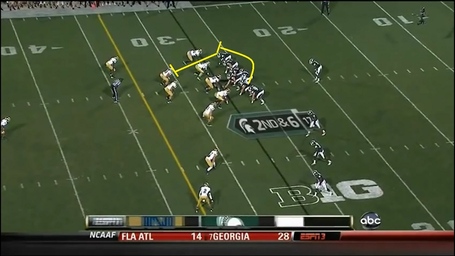 This play is a trap. Sims, instead of blocking Shembo on the end, releases to block Dan Fox. The backside guard pulls and throws a block on Shembo, who rushes upfield after going unblocked. 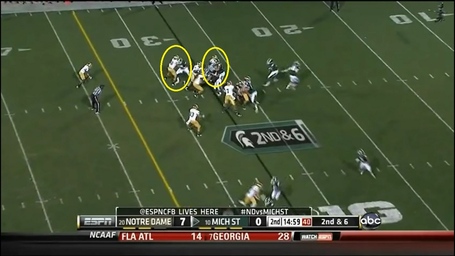 Well, that's how it's supposed to go.

You can see the guard throw a block on Shembo and Sims get up to Fox. There's a lot of room to the outside if Bell can get there. 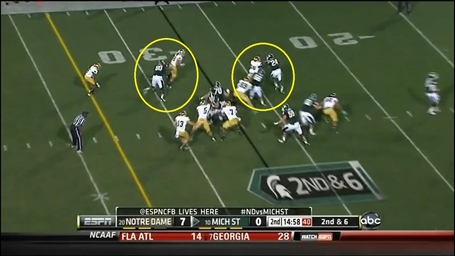 Sims whiffs once again - told you he had a rough game - and Shembo gets off his block easily. Shembo gets a hold of Bell and Fox cleans it up. Bell is dropped for a loss.

I could go on, but I think you get the point. The Irish played great defense all game, especially on the line. Shembo had a great game, but KLM, Nix, Calabrese and Fox all played very well. Te'o was all over the field, as always. And Tuitt had a relatively quiet game, but he still notched a sack and a forced fumble.

It's important that the defense continues to play this way all season. The offense is still a little shaky and the secondary just lost its best player in Jamoris Slaughter. But a strong front seven can cover that up. If the defense can shut down the run and get in the quarterback's face when he drops back to pass, opposing offenses will have a tough time scoring points.

We saw that on Saturday and let's hope we see it the rest of the season.