Five Wide Fullbacks: The "We're Taking This to the BCS/Getting Carried Away" Edition

Share All sharing options for: Five Wide Fullbacks: The "We're Taking This to the BCS/Getting Carried Away" Edition

So while walking through the halls of school Monday morning, multiple people congratulated me on the win. This means 1) that I've successfully made it known that I am a Notre Dame alum and 2) they will turn on me and troll me at the earliest possible opportunity, and dear God do I hope that it's not next Monday.

Having said that, I may or may not have started shouting "WE'RE TAKING THIS ALL THE WAY TO THE BCS!" in response to those salutations yesterday, so I may be getting carried away over here. I don't care, it's football season again and I love it.

So just how good is this team and how far can they go?

Every major news outlet has already done their premature crowning of Notre Dame and Kirk Herbstreit so graciously dubbed the Irish relevant again on national television so I do this with some caution now that I've come back down to earth... somewhat. I predicted in our preseason magazine that this team would go 9-3. Maybe, just maybe we can win a game or two more than that, but let's not get completely carried away just yet.

That said, I have a classmate over here who used to play center for a FBS football program and he told me yesterday that he thinks Notre Dame has a better front seven than Alabama and LSU and that despite the still very tough schedule, he'd be SURPRISED if Notre Dame didn't win 10 or 11 games. I asked him if he even liked Notre Dame - "Nope" he said, "Never liked them, never will." So there's that.

So it looked like the men's basketball team showed up in full force to support the football team. Fun question: Who would be the best football player among the basketball players? 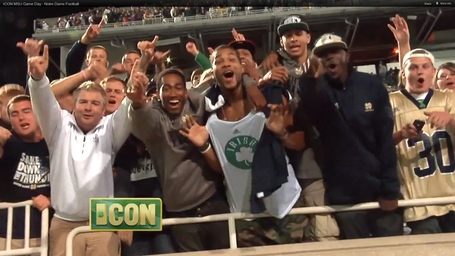 So yes, the roundballers did show up in East Lansing! That's Eric Atkins, Joey Brooks, Cam Biedscheid, Zach Auguste and Jerian Grant repping hard for ND over there. The basketball team had a good week with their move to the ACC (Though of those guys in the picture, only Biedscheid and Auguste are likely to ever play in the conference) It's good to see the two teams bonding on the field and the court! Remember KLM and Golic leading Leprechaun Legion last season? I know for a fact that Brooks is good friends with Te'o and KLM among others and that all the other young guys are hanging with each other in their free time so that's good to see.

And why yes, that does sound like a fun question. Good job, me! I think having Jack Cooley as a blocking TE and goal line target would be interesting and I think a guy like Grant would make an exciting WR. But if I had to pick one, I'd probably have to go with Brooks just because of his physical attributes. While Atkins, Grant and Biedscheid are all relatively skinny guys, Brooks has a 6'6"/220 frame and good speed so I can see him as an every down WR or even a Safety type in the secondary. I also know that he used to clock in around 4.6 in his 40 time in high school so if he wasn't lying about that then I think we'd have a nice athlete to put out there.

So how is Notre Dame going to stop Denard Robinson?

They're not. As coaches typically say, you can't quite stop Denard Robinson, you have to contain him. Though, I gotta say Alabama pretty much stopped him. The play of the Prince Shembo/Ishaq Williams duo will be key as will the (now even younger, due to Slaughter's season ending injury) secondary. If the pass rush can get to Robinson every once in a while and land a good hit just to get to his head (I'm looking at you all 650 pounds of Louis Nix and Stephon Tuitt) while using Shembo and Williams' athleticism to bother Robinson on the rollouts, there is a chance that Robinson will not completely embarrass Bob Diaco's defense this Saturday. But who are we kidding. This is Denard Robinson we're talking about. Of course he'll look like the Heisman favorite against Notre Dame. (Dear God, please let this reverse jinx work.)

Any unusual predictions to along with the final score conjecture?

So I predicted in my last 5WF that one of the young CBs would return an INT for a touchdown. When Jackson picked off Terbush, I thought he would take it to the house to prove me right, but alas I'll take half a prediction - so I'll say Robinson will be held for under 25 yards rushing (which means that if I'm half right as I was last time, he'll be held under 50 yards on the ground which I would still take happily). The final score? 35-21 Notre Dame. BOOM. Two TD win that vaults ND into the premature "OMG They're gonna really go to the National Championship Game!" conversation.

Finally, how amazing is Manti Te'o? Is he a legitimate Heisman contender? 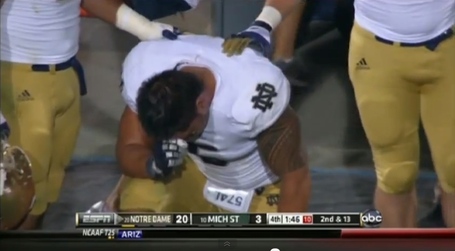 Like many of you, I teared up during this moment as well.

Our own Jim Miesle will come up with a post in the near future about how amazing this man is (oooh, a verbal trailer) and while we all feel an indescribably profound connection with this awesome Polynesian man, I want to focus on his on field performance so far this season. We all knew how hard a hitter he was, how great a run stopper he was and how passionate a player he was but he added the final piece of the puzzle with his markedly improved pass coverage as he had his first career pick against Navy along with several crucial pass breakup. But most importantly he has inspired this team on both sides of the ball and every single player that has seen the field has picked up their level of play because of his example. We've already celebrated his return this season and E has well documented what he means to this program, but if Notre Dame can pull off the kind of season that they believe they are capable of, I'm fairly confident that we'll see #5 make a trip to New York City. He's already on the rise in the Lott, Bednarik, and Nagurski list and I see no reason why he won't get some Maxwell and Heisman love if the Irish keep this up. The fact that he's become America's football sweetheart won't hurt either.

BONUS! Our own CW had this to say on twitter this week, what are your thoughts?

As Goldilocks would say about the Baby Bear's porridge, this is just right.