Share All sharing options for: Purdue Review: Purdue Sells Out

What a difference a week makes.

After shoving Navy up and down the field and running for almost 300 yards, most Irish fans (including myself) had high hopes for this team. We were going to run all over teams by throwing a bunch of tight ends out there and Golson was going to ease into his role as the starting quarterback and don’t worry about the secondary because we were playing an option team and so on and so forth.

But after seeing the offensive line get manhandled by Purdue and our rushing output drop by 241 yards, I think most fans are re-evaluating those thoughts.

But was it really that bad? Are our coaches that incompetent?

No and no. But it wasn’t pretty and it certainly wasn’t the most well-coached game ever.

Let’s look at how the Boilermakers were able to bottle up the Irish offense.

Simply put, Purdue sold out to stop the run. They routinely lined up with more defenders in the box than we had blockers. 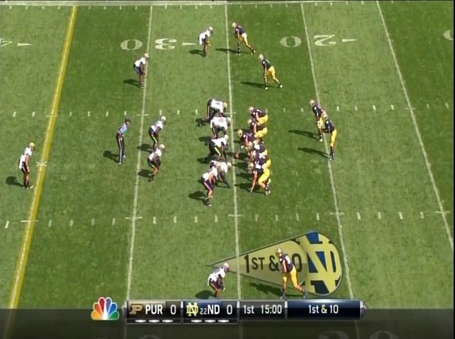 This is the first play of the game. The Irish line up with one tight end and five offensive linemen - six blockers total. Purdue is in a "4-3 over" defense, meaning the strong side outside linebacker is lined up over the tight end. The other two linebackers line up in the middle of the formation.

That's seven defenders against six blockers. I don't care how gritty of a fullback you have or if your coach is Nick Saban, Urban Meyer, Bob Stoops, or John Gruden, you cannot run the ball on that defense. To do so would be an exercise in futility.

Further complicating things, bubble screens aren't all that helpful in this situation. Look at the picture above again. When the Irish lined up with three receivers, one of safeties came down to cover the slot receiver. That leaves two defensive backs against two receivers. Throwing a bubble screen would result in a one-on-two blocking scenario. Sure, it could work sometimes and maybe the receiver could break a tackle and pick up some good yards, but that wouldn't have forced the defense to adjust in any way. Purdue probably liked their chances against those bubble screens and it wouldn't have done anything to soften the middle of the field to open up the run.

But this does open up different areas. Purdue mostly lined up in man coverage with only a single high safety over the top. There are a couple different ways to attack this defense.

The most obvious answer is to throw the ball a lot. If you have enough success throwing the ball over the top, eventually the defense will drop that second safety back and the middle of the field might be open to run the ball again.

That's pretty much the approach Brian Kelly and Chuck Martin went with. But they tried a few other things with varying degrees of success.

The first was to hit the Boilermakers with play-action. 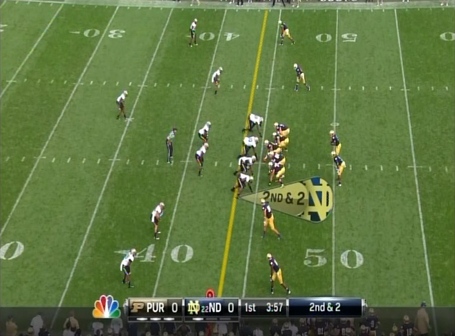 The Irish line up with four wide receivers. Purdue has six defenders in the box against five offensive linemen. The receivers are all matched up with a defensive back with one safety helping over the top. 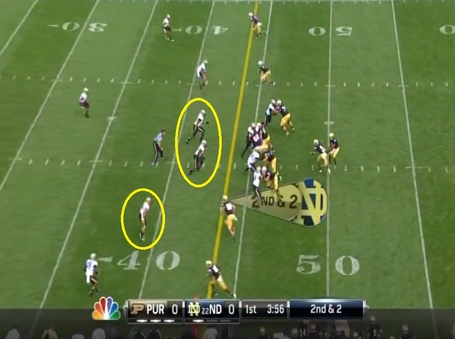 The play-action fake uses the aggressiveness of the Purdue defense against them. The linebackers both bite on the fake, and the DB covering Tyler Eifert freezes momentarily. 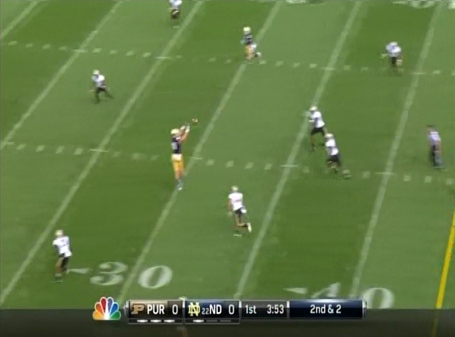 This leads to a wide open Eifert down the seam.

The next approach was to start running the ball to the edges when it became apparent that running up the middle was futile.

The first play the Irish used was a quick pitch to the outside.

The play itself is pretty simple. 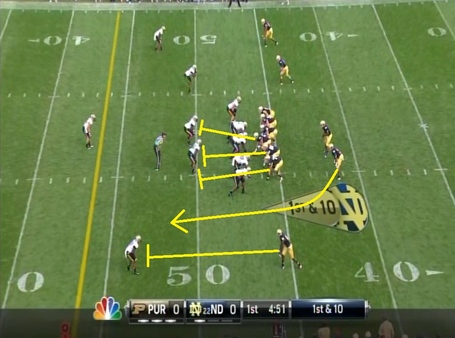 The center and playside guard and tackle ignore the defensive linemen and go after the linebackers and safeties. The running back only has to outrun the linemen to the outside to turn it into a nice gain.

The second play was the good, old-fashioned outside zone. Notre Dame ran it from under center and from the shotgun. Theo Riddick had a little bit of success using this play, though the line and tight ends still struggled to seal the edges.

They also used motion to force Purdue to stop stacking the box.

The Irish initially line up with an empty backfield. Purdue only puts six men in the box against Notre Dame's six blockers. 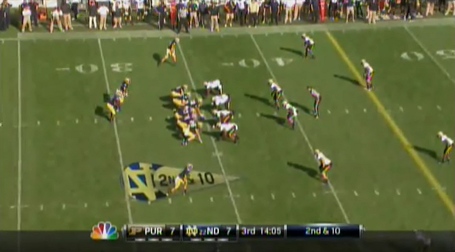 Theo Riddick motions into the backfield and the ball is snapped before the defense can adjust. 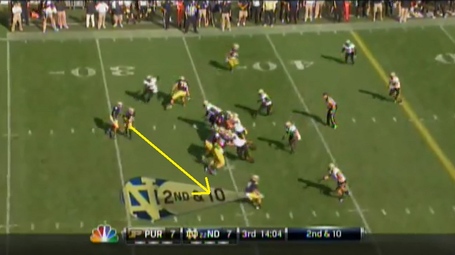 The line does a nice job blocking on this play. 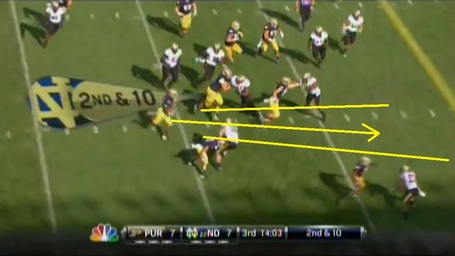 Riddick has a lane and picks up seven yards. This was one of the best runs on the day.

So you can see that it's not like Kelly and Martin did nothing to counteract the Purdue defense. They tried a couple different things and managed to pick up yards even with the offensive line struggling.

The problem is, they didn't do them enough. Why the Irish didn't keep using play-action and motion to try and loosen up the congested Purdue defense is beyond me. They worked when they used them, but they didn't go back to them.

I'll cut the coaches a little bit of slack because Kelly can only call the plays Golson is comfortable running, but I find it hard to believe there's only two or three play-action plays Golson knows.

Combine the unimaginative play-calling with the struggling offensive line, and it made for a long day on offense. It's not that Golson played poorly, but I think Kelly could have done more to help him out.

This isn't the end of the world and if there was ever a game for Golson and Kelly to struggle, at least it was in a winnable game. It's unfortunate we have to talk about Kelly "struggling" as a playcaller with a quarterback he recruited in Year Three, but here we are. Let's just cross our fingers and hope everything gets better.