Following a late game-winning field goal to sneak past Purdue, the Fighting Irish travel to Michigan State this week to battle the tenth ranked Spartans. Last time Notre Dame was in East Lansing a fake-field goal and pass for a touchdown won the game for State in overtime.

Little Giants Revenge commences at 8PM in a couple days.

Here's the One Foot Down preview for this Saturday night's game in prime time.

This is the Irish record against Michigan State teams that come into their game against Notre Dame ranked 10th or better in the country. The Spartans come into this Saturday's matchup right at No. 10 in the AP Poll. This is the highest ranking for Michigan State leading up to a game with Notre Dame in 33 years. You have to go all the way back to September 29, 1979 when the Spartans traveled to South Bend as the nation's 7th ranked team, to see the Irish play such a highly ranked Spartan team. Notre Dame won that game 27-3 as the No. 15 team in the AP Poll.

The amount of touchdowns the Spartans have given up through two games this season while on defense. Boise State and Central Michigan each took back an interception for a score, but Michigan State has yet to yield one when their defense is on the field.

This is the consecutive wins by Michigan State in which they come into the game as the favorite according to the spread. Last year, the Spartans were slight underdogs in their loss to Notre Dame.

The consecutive home victories by Michigan State, stretching all the way back to the end of the 2009 season and a loss to Penn State. Since then, MSU has gone a perfect 7-0 at Spartan Stadium in each of the last two seasons and won their home opener against Boise State this season.

Sims has been a backup for Michigan State before this season but is now getting his chance to shine. At 6'5" 285 he's a huge target that moves well for his size. Sims already has 10 receptions, 113 yards, and one touchdown through two games and will be a major crutch for an inexperienced quarterback in this game.

Bell has been a very productive running back for two-plus years and is being tasked with carrying the Michigan State offense in 2012 as the team breaks in a new QB and receiving corps. This season he's 5th nationally in total rushing yards (280) and has carried the ball an absurd 62 times through two games---good for the second most in the country. Bell had a big game against the Irish in 2010 (17 carries, 114 yards, 1 touchdown) but was effectively shut down early last season in South Bend (7 carries for 27 yards) as the Spartans abandoned the run after getting down to the Irish. 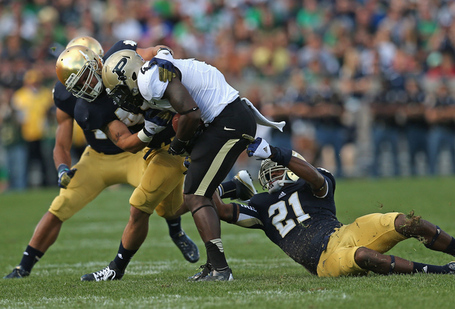 Maxwell has been groomed to be State's starting quarterback for three years now and is very much in the mold of his predecessor Kirk Cousins. He's got good size (6'3" 212) and can move around pretty well. Maxwell has a very strong arm and can fit the ball into some tight spaces as well. He's generally looked quite sharp in his first two career starts this season, but he's also shown he can be mistake prone.

Bullough is State's leading returning tackler from 2011 and is atop that stat line again in 2012 with 11 tackles. He leads the linebacker corps, along with Denicos Allen and Chris Norman, that may be the best the Irish face this season outside of Stanford's group. USC may plead their case, but State's corps led by Bullough are much better at clogging lanes and stopping the run.

Gholston is one of the more controversial players in the country thanks in large part to his infamous personal fouls as well as his maddening inconsistency---he was limited to 4 tackles and 0.5 tackles for loss last year against Notre Dame. However, he's long (6'7" 250) and athletic and has a ton of potential. Even with good but not great numbers last year (70 tackles, 16 TFL, 5 sacks) he is considered a 1st round NFL Draft talent. After Notre Dame's struggles on the offensive line last week he'll have to be a major player to keep in check this Saturday.

This is likely to be the toughest defense Notre Dame faces this season. The Spartans might be a touch less explosive and disruptive on the defensive line in comparison to Purdue (especially in the middle), but State has an overall deeper, talented, and experienced starting 11 than the Boilers and probably than anyone on the Irish schedule.

They did lose arguably their best defender in DT Jerel Worthy to the NFL, but the Spartans return 8 starters from last year and have some experienced players filling in holes in the middle of the defensive line. Michigan State was 6th in total defense last year---giving up just 277 yards per game---and were ranked 8th in Football Outsiders Defensive S&P rankings. FO's S&P rankings aren't out yet, but the Spartans are ranked 3rd overall in Defense Efficiency, so for all intents and purposes this is an elite defense.

The Irish had some early success last year against this defense and took advantage of a couple big plays, but State shut the Notre Dame offense down in the second half as the Irish went conservative nursing a lead. We'll see if the Spartans defense is even better this year, and if the Irish offensive line can come back strong after a very poor effort last week.

Things were pretty easy for Golson overseas in Ireland as he spent most of the game handing the ball off and watching his teammates roll for almost 300 yards. Now, he'll have to enter one of the more intimidating stadiums in the Big Ten against a team that has played sensational for a number of years inside their own building.

Further, we saw last week that Golson and the offense are having a difficult time getting the offense set up and in the right protections before the play clock expires. These problems will likely be magnified with the crowd noise and smart defensive playcalling that the Spartans are known for.

Kelly said this week that they are comfortable with their non-verbal communication and that Golson simply has to speed up his internal clock and get everything set a little quicker. He'll have his hands full this weekend, particularly if Notre Dame continues to shuffle in 3 or more players after nearly every snap.

Notre Dame isn't exactly the walking wounded right now, but they had some injury concerns last week that may impact this game. As of today it's expected that everyone who was injured against Purdue will play, but we won't know with certainty until kickoff. 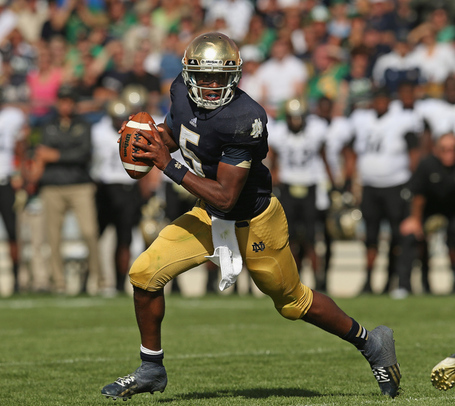 Kapron Lewis-Moore strained a calf muscle, Jamoris Slaughter has a shoulder injury, DaVaris Daniels is nursing an ankle, and Tyler Eifert is recovering from a mild concussion. The team really needs all four of these starters on the field Saturday night.

The good news is that outside linebacker Danny Spond has been cleared to play and should help inject some life in the pass defense game.

Michigan State's offensive line was a little banged up last year but they return 4 starters from 2011. However, despite being known as a power-running, pound it down your throat, type of offensive line, they haven't been nearly as productive as their rep suggests.

They do like to run the ball a lot, which creates that rep, but last year the line paved way for only 1,931 yards at 3.95 per rush---fairly pedestrian numbers. Even this year, with Le'Veon Bell throwing his hat in the Heisman race, the Spartans are only averaging 4.15 yards per carry---a tenth of a percent less than Notre Dame.

However, State is one of only 9 teams who have played 2 games so far and not given up a sack. With Notre Dame giving up 7 sacks through two games after last week's dismal performance, there are a lot of questions with the Irish line. I am certain that Mike Golic is the weakest of all linemen on both teams, and the inexperienced Christian Lombard is a concern as well, but these offensive lines are fairly close to each other when you factor in the future pro's at center, left guard, and left tackle for the Irish.

All things considered, the line play for this game looks awfully equal.

I expect this to be a tight and entertaining game, but I think Michigan State is the better team right now.

However, I have more faith in Notre Dame's defensive line that they can stop the run AND get after the quarterback. In a game like this, such an advantage (however slight) may prove to be the difference.

Also, despite the ascendancy of Le'Veon Bell, I like Notre Dame's depth at running back better, their advantage at tight end, and the playmaking skills of Golson versus Maxwell.

You could make the case that Notre Dame, on the whole, looks to be quite a bit stronger on offense compared to Michigan State. Given that the O-lines are potentially a wash, I'm sure most people would take Golson, Wood, Riddick, Atkinson, Eifert, Niklas, Daniels, Jones, Toma, and Neal over Maxwell, Bell, Caper, Hill, Sims, Fowler, Lippett, Mumphrey, and Arnett.

In fact, there's probably a decent chance that Michigan State struggles mightily on offense on Saturday. If their running game can't move the chains and Maxwell is tasked with throwing to a bunch of talented but inexperienced receivers, things may not go too well for State. You can bet that Notre Dame's primary goal on defense will be to shut down the run early and make Maxwell beat them.

Nonetheless, defense wins games like this and Michigan State is better on that side of the ball. They'll have an amped up crowd in prime time, at night, and facing a young quarterback making his first career road start on U.S. soil. If I'm Michigan State, I'd be plenty worried about their lack of proven playmakers on offense outside of Bell, but an elite defense at night against a program that is 0 for their last 9 against top 10 teams has to make them feel comfortable about a win.

State's line is good enough that they'll make it hard for Notre Dame to run the ball, and they have the horses in the secondary and efficient enough linebackers in coverage to contain the Irish passing game. On the flip side, Notre Dame's corners are inexperienced and the linebackers in coverage continue to be a major liability and State will continually pick on the latter group just like they did last year.

I actually think the Irish will bottle Le'Veon Bell up and I'd be surprised if he gains over 100 yards (unless he's carrying the ball 30+ times) but their offense should do just enough to win teamed up with a nasty defense. Notre Dame should play well and compete, but there are too many indications pointing to a loss and I believed before the season that ND would split the Michigan games. An Irish win would be nothing short of momentous, especially given the recent history in these big games, but I don't see it happening this weekend.