With the off-season drawing to a close, we’re ending our Blue-Gold Game Reviews with a look at the quarterbacks.

Here are the other players we’ve looked at:

After breaking down true freshman Gunner Kiel – the quarterback least likely to see the field this season – we move to the quarterback who was close to ending up as an afterthought in the quarterback derby but was thrust back into the discussion last week, rising junior Andrew Hendrix.

We saw a bit of Hendrix last season and a lot of use (including me) drooled over his potential. He showed excellent execution running the ball and flashed the cannon attached to his right shoulder. But that’s all it really was: potential. He never played poorly, but it was obvious he still needed work to be the starting quarterback. And that’s what we saw in the spring game.

I thought Hendrix did a nice job making the proper reads in the passing game, but lacked in execution.

Let’s start with a good play.

This play was probably the highlight of Hendrix’s spring game. 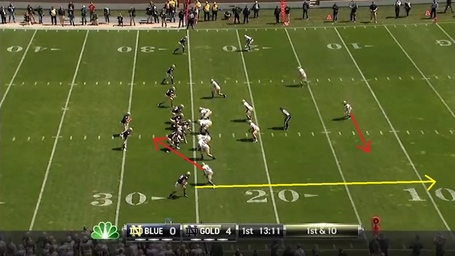 The offense lines up with four wide receivers. The corner covering Eifert comes on the blitz at the last second. Hendrix reads the play perfectly and throws a strike to Eifert for the touchdown.

Hendrix made nice reads for the most part, but didn’t always make a good throw. 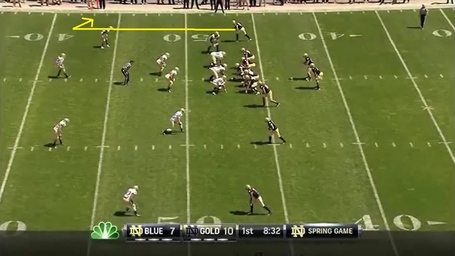 The offense lines up with four wide receivers again. Once again, Tyler Eifert is split out wide to the short side of the field. Eifert runs ten yards downfield and settles in the hole in the zone defense. 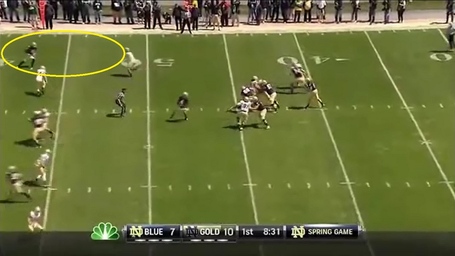 Hendrix times it right and throws the ball before any defenders can catch up to Eifert. But the Voodoo Child tries to throw too far outside and Eifert can’t make the catch. 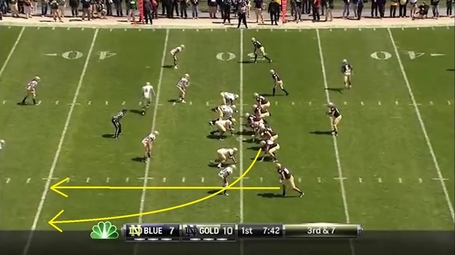 Once again, Tyler Eifert is split out to Hendrix’s left. Theo Riddick motions out of the backfield, taking a linebacker with him.

Alex Welch runs a wheel route out of his tight end position on the line. Eifert runs a go route, mostly to screen the defender covering Welch. 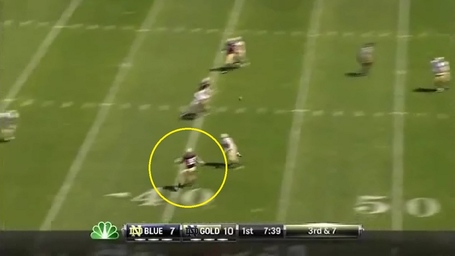 Welch is open, but Hendrix airmails him.

I think Hendrix looks about the same as he did at the end of last season: all the tools to be a good quarterback but still raw in the passing game. Even though he made good reads, he needs to complete those passes if he wants to be the starting quarterback. And I didn’t even talk about his very last play where he stared down his receiver and threw the ball right into Ishaq Williams’ chest.

The other question is how well Hendrix fits into this offense. It’s no secret that Kelly likes to throw the ball, but Hendrix is a much better runner than he is a passer. I think he would be best suited in a run-first spread. The reads in the passing game are (typically) simpler and he would be deadly throwing downfield off of play-action with his arm.

But Hendrix still needs refining in the passing game. In this offense, the quarterback will be a passer first and a runner second. If he can’t consistently complete his passes or protect the ball, he won’t be the quarterback for Notre Dame. But if the light turns on, Hendrix could be very, very good.