Last week, OFD was abuzz when it was learned Kelly said he was interested in using three or four tight ends at once this season. Naturally, we all started asking what putting four tight ends on the field would look like.

Well, to answer that question, I decided to look at the tight end-iest offense in the country, the Stanford Cardinal. When Stanford played the Irish at the end of last season, they lined up with three tight ends and a fullback eight times. Here’s what that looked like: 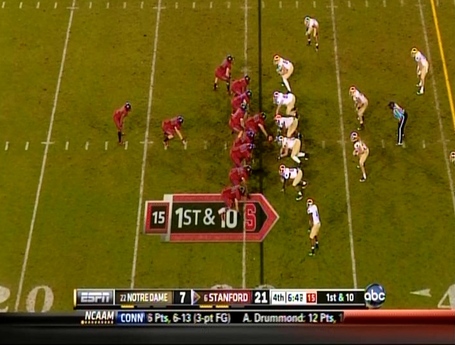 Obviously, a formation without any wide receivers is built for running that ball. In five of the eight times they lined up in this formation, the Cardinal ran their specialty, Power O. 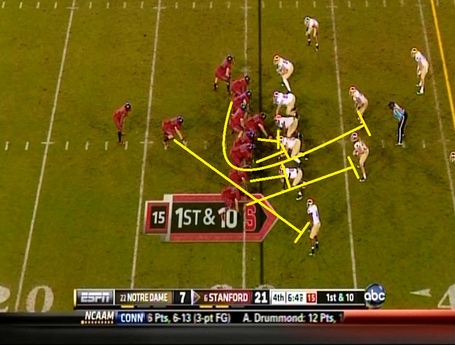 The extra tight ends bring along extra defenders, so the blocking scheme is slightly different. Normally in a Power O run, the tight end on the end of the line seals the edge while the fullback kicks out an outside defender, typically an outside linebacker. On this run, the innermost tight end on the line seals the edge while the outer tight end takes out the first linebacker he sees, Dan Fox. The fullback still kicks out the outermost defender, but in this case that happens to be cornerback Gary Gray. The backside guard pulls around and leads the way like normal and blocks Manti Te'o.

Twice, Stanford ran play-action out of this formation. Both times, Andrew Luck hit the fullback in the flat, but the Cardinal only gained a total of five yards on those two plays.

That leaves one last play out of this formation. After running and using play-action all game, Stanford dialed up a pass play to throw the Irish defense off balance. 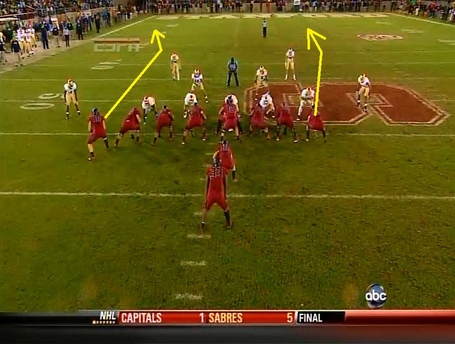 The Cardinal were relying on surprise to trick the defense. The two outside tight ends ran seam routes down the middle of the field while the other eight players blocked for Luck. The Irish secondary covered the play well, but Zeke Motta slipped on the "turf" and Stanford tight end Coby Fleener broke free for the clinching touchdown.

So what can we learn from this? Can the Irish do anything like this? You might be tempted to say no since Stanford used a fullback in their formation, but Kelly has already shown a willingness to use tight ends as fullbacks. We saw this in the Sun Bowl two seasons ago when Tyler Eifert lined up as a fullback multiple times. 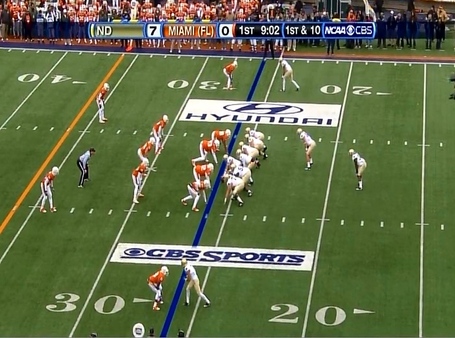 I'm not saying the Irish will do this, but it's a possibility. They also could put three tight ends on one side or put two on each side of the line.

I think this would be an excellent addition to the offense. The Irish have a stable of talented tight ends and an unproven receiving corps. They also benefit from a variety of skill sets within their group of tight ends. Tyler Eifert and Ben Koyack excel at catching the ball and are match-up nightmares over the middle of the field. Alex Welch and Troy Niklas are powerful blockers who can move bodies in the running game. Putting all four on the field would allow the Irish to take advantage of their strong running game while keeping defenses honest in the passing game. I don't know how much of this we'll actually see, but it could be a lot of fun.