We made it. Finally. The long, dark days* without football have passed and camp is set to open tomorrow. Coach Brian Kelly is set to hold his first presser of the season later today, complete with comments sure to enlighten and intrigue fans and haters** alike.

*Note: we did not actually spend our off-season in the southern hemisphere, which is the only circumstance that would make this statement plausible

**Second note: this is specifically aimed at a certain sportswriter assigned to cover the team in the largest Midwestern market

Largely inspired by Longo Beach, Whiskey created an offseason training regimen for the OFD staff. While details cannot be shared, let's just say it included copious amounts of YouTube footage, keyboarding drills, a bit of required reading and of course, a tailgating obstacle course. These are the kinds of sacrifice we are willing to make for our loyal readers.

Without further ado, let's address this week's five points of discussion (after the jump).

1. Head Coach Brian Kelly announced that QB Tommy Rees and LB Carlo Calabrese will be suspended for the season opener against Navy (in Dublin). Neither will make the trip to Ireland. Thoughts?

While this has been discussed extensively already on OFD, I am firmly in the not surprised camp on this one. In hindsight, it appears that CBK wanted to let the legal side of things play out before handing down (or publicizing) his punishment for the not-so-dynamic duo.

Too many people want to compare this directly to the Floyd situation-a mistake in my eyes. Given the reported "facts" on what actually happened, Kelly had to dish out some punishment to both players. To not do so would have been a mistake.

Also, to further elaborate on a comment by Joe Schulz in Whiskey's FanPost announcing the suspensions-this may play out to be a stroke of genius by CBK. In a single stroke, he increased the number of reps for Goldrix in camp, while challenging Rees to step up his game when he is reinstated. This move should also give Hendrix an immediate confidence boost, as he appeared to be the third wheel in the QB battle. It also gives the staff an opportunity to evaluate the QBs head-to-head, which will help them make the best possible decision.

2. Following the announcement of the Rees/Calabrese suspension, everyone's favorite ND beat writer Brian Hamilton got into a Twitter spat with ND Law Professor Rev. William Dailey. Do you have any feelings on this?

For reference, here is part of the exchange: 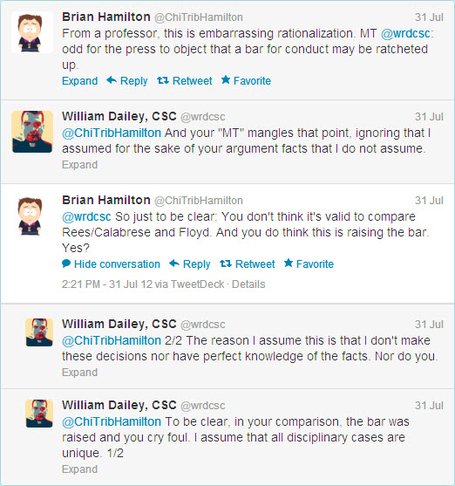 To borrow a quote from Vizzini in The Princess Bride, Hamilton fell victim to one of the classic blunders--never engage in a land war in Asia. Or perhaps more appropriately in this case, don't engage in a debate with a law professor.

At this point, Hamilton is just playing the antagonist role in order to cruise for clicks. If you don't ignore everything he says already, please start doing so immediately.

3. This week AD Jack Swarbrick hosted a Google+ Hangout with a bunch of ND Sports Bloggers, including OFD's own Eric Murtaugh. On a scale of 1-10, how do you would you grade how great that was?

Captain Jack continues amaze, so I will give this one a solid 9. As an alumnus, JS understands and appreciates all things Notre Dame. In addition, he also has is finger on the pulse of the future of college athletics. By embracing new mediums (including lowly bloggers) and utilizing technology to give fans a peek behind the scenes, I think it is safe to say he knocked this one out of the park.

Our own CW probably said it best in the reaction to the seemingly inevitable announcement concerning Redd:

Well, it's good the PSU punishment was able to help out a team that earned its sanctions by having an actual competitive advantage.

Silas Redd sounds like a great name for a fictional villain. Considering he is now headed to SoCal, I think he officially became a real-life one. Did I mention that someone will have to give up their scholarship to make room for Redd?

While I am sure that Redd will help the Trojans this season (RB was their thinnest offensive skill position), the last time I checked he doesn't play defensive line.

I may be wearing blue-and-gold colored glasses on this one, but the 2012 USC football team feels awfully Weisian. They have tons of talent in their first team, but lack depth at certain key positions. After avoiding major injuries in 2011, one has to think that they will have difficulties repeating that feat this fall. Add to that the scholarship limitations and a lack of a true bye week (they play on a Thursday night after their weekend off), this Trojan team will likely drop a game or two along the way-something that would have happened with or without the addition of Redd.

How does one pick an appropriate song? There are several ways to look at this one.

First, you could go with some of the more obvious choices, like AC/DC's "Thunderstruck" or perhaps even Ozzy's "Crazy Train" (not really serious on that second one). Other choices would include several tracks from the Led Zeppelin discography or other classic rock tracks.

Then I thought of some instrumental tracks, such as Metallica's "Call of the Ktulu" or "To Live is to Die."

Given that the BCS title game is in Miami this season, perhaps you could choose something related to that.

However, the song I am going to pick is "Ill with Want" by the Avett Brothers. Here are a few lines from the song:

I am sick with wanting

And it's evil how it's got me

And everyday is worse than the one before

The more I have the more I think:

I'm almost where I need to be

If only I could get a little more

It may sound like an odd choice, but this one is for the fans. We collectively are so starved for a run at a national title, it has lead to increasingly irrational behavior from the "lunatic fringe" portion of the fans. As we look forward to the upcoming season, just bear in mind that the players, coaches and staff want the same things that we the fans do-and likely want it much, much more.