Where Have All The Option Teams Gone?

Share All sharing options for: Where Have All The Option Teams Gone?

On September 1st, the Irish will take on the Navy Midshipmen and face what has become a relic in college football: the option-based offense.

The option used to be the offense du jour in college football but has fallen by the wayside with the rise of the spread offense and a newfound emphasis on the forward pass. It is now seen only as a crutch used by undermanned teams like the service academies, even though the academies continue to go to bowl games and pull upsets with less talent than most mid-major schools.

But the question is: why? Sure, the option is popping up again in spread offenses, but true option-based offenses are no longer seen in major college football. But why have teams abandoned the option despite its past success and continued success at the academies?

It's hard to pinpoint when option plays first entered into football, but the true triple option was developed by Houston's Bill Yeomen. He first introduced his split-back veer offense in 1964 in a game against Penn State. Houston went 47-15-2 from 1965-1971 while running the veer. 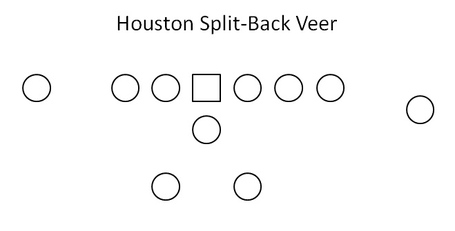 Yeomen's work was picked up by Texas offensive coordinator Emory Bellard. The 60's started off great for the Longhorns, winning the 1963 national title under legendary coach Darrell Royal, but Texas went a combined 19-12 from 1965-1967 and needed to try something new. Bellard took Yeomen's split-back formation and tinkered with it, creating what is now known as the wishbone. 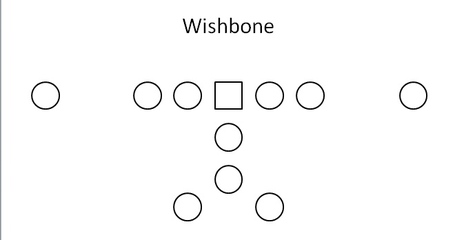 The term "wishbone" was coined after the offense's debut against, oddly enough, Houston in 1968, a 20-20 tie. Texas proceeded to go 74-15-1 from 1968-1975, winning two national titles. From there, the offense took over the nation. Bear Bryant rode the wishbone to two national titles at Alabama, and Barry Switzer's Oklahoma Sooners ran for 472 yards a game in 1971. The wishbone evolved into the I-bone (triple option plays run from the I-formation) and won national titles for Colorado in 1990 and Nebraska in 1994, 1995, and 1997. And some coach named Lou Holtz won a national title in 1988 running an option-based offense.

But by the 90's, the option offense had become the exception rather than the rule. Most major programs began running pro-style offenses before the spread offense began taking over college football around the turn of the century, much like the wishbone did in the 60's. But, why? Did defensive coaches "figure out" the option offense? Not really.

In his book "Blood, Sweat, and Chalk" Tim Layden quotes Lou Holtz on the decline of the wishbone:

"I think it's one word: recruiting," says Lou Holtz, who ran option football at five stops in his college coaching career, including with his Notre Dame national champion in 1988. "Once alumni started treating recruiting like it was a season in itself, it became very difficult to run the option. All of a sudden, [if you were an option team,] you couldn't get the dominant quarterback, because you weren't going to throw the football and get him ready for the NFL. You couldn't get the dominant left tackle, because you weren't going to teach him to pass-block. You couldn't get the dominant running back, because he wasn't going to be featured enough. Now, you can still win with the option even if you don't get those people, but if you're not getting those top recruits, the alumni start to think you're losing and you're not exciting enough."

"The wishbone in particular became a service-academy offense because the major programs running it could no longer recruit the great quarterback, the great running back, the great left tackle," says DiNardo. "When we were running it at Colorado, I can't tell you how many programs beat us up in recruiting by telling kids, ‘You won't be able to play in the NFL because you won't be learning the passing game.' And eventually most of the option teams just caved in, and it gradually went away."

But the option isn't completely dead. The spread offense employs options plays quite frequently. The veer, the midline, and the speed option are all very common plays in the spread.

The new trend in the spread is to take common run plays and find a way to attach a quarterback read onto it. The zone read is obviously one example, but many teams have begun using the "inverted veer," which uses Power O blocking. This play is ideal for pro-style teams that want to add some option plays to their playbook. This was a favorite last season at Ohio State with Braxton Miller at quarterback and at Michigan with Denard Robinson.

These plays usually do not incorporate a second read, so they are not true "triple option" plays. Every so often, a coach will use a slot receiver or second running back as a pitch man to add that third option, but it's not required on these types of plays. There's been some experimentation in adding passing routes to these plays to add some versatility and maybe even create quadruple option plays, but asking a quarterback to make pitch reads and then read a defense and make a good throw is asking a lot, so it's unlikely those types of plays will ever really take off.

But one triple option holdout remains outside of the service academies. Former Georgia Southern and Navy head coach Paul Johnson brought his flexbone offense to Georgia Tech in 2008. 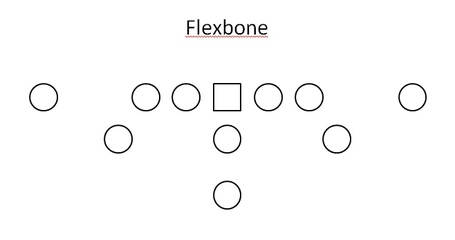 It galled Johnson then, and it galls him now, that the wishbone fell into such disfavor and was so roundly criticized, like fashion worn a year too long. To his mind, it never stopped working. Coaches just stopped using it because something else was available. "All of a sudden there was this stigma attached to it, that you're not supposed to use it anymore," says Johnson. "Well, why not? I think it's because those really strong Miami teams beat some Oklahoma option teams by throwing the ball. And that was about it. Then they would say it's an offense for overmatched teams, when you don't have equal talent. At Georgia Southern we had equal or better talent than the team we were playing, and we went 62-10."

Georgia Tech is an interesting case study for how the option works in the modern game. On one hand, Johnson won a lot of game at Navy running the flexbone with overmatched teams, so running it with the talent available to him at a BCS conference school should open the door to new heights for him. But on the other hand, how much of that success was due to running an unfamiliar offense against teams that had never seen the option before is unclear. In a conference, coaching staffs will see the option every year and will, in theory, learn how to defend it.

So far, it's hard to argue with the results. Georgia Tech is 34-19 in its four years under Johnson, winning the ACC in 2009. The Yellow Jackets have slipped to just 13-12 the past two seasons, but much of that can be blamed on the defense. Georgia Tech hasn't finished lower than fourth in the nation in rushing under Johnson.

But the big question for Johnson was how well he would recruit offensive players to play his system. Let's look at Georgia Tech recruiting over the past 11 years (because that's how far back Rival's database goes):

(all ratings via Rivals)

As you can see, Georgia Tech never exactly set the world on fire in recruiting outside of the 2007 class, which just stands as an outlier. In fact, I would even argue Georgia Tech recruiting has actually gotten better under Johnson.

Let's compare the average star ratings of offensive recruits in the four full seasons before Johnson took over (2004-2007) with the first four classes completely recruited by Johnson (2009-2012).

This doesn't take into account transfers, position switches, and says nothing about the eventual performance of each recruit, but it does show the caliber of the recruits that Johnson is attracting to Atlanta.

It looks like recruiting is holding steady at the QB, RB, and WR positions, even though the number of WR recruits is way down. The flexbone offense typically doesn't use more than two wide receivers at a time, so it is not necessary to have a large number of them on the roster, though. It is interesting, though, that Georgia Tech hasn't signed a recruit listed as a tight end since 2006. The tight end position is basically non-existent in the flexbone offense.

What is very interesting, however, is how the average star rating of offensive linemen has improved almost a whole star under Johnson. Again, Johnson isn't pulling in four- or five-star linemen, but Tech didn't recruit a single offensive lineman rated higher than two-stars between 2003 and 2006. From 2009 to 2012, every single lineman has been rated three-stars. It's probably not too hard to sell kids on being able to run-block all game, even if it means a tougher road to the NFL.

If Georgia Tech continues to succeed and even manages to win a few more conference championships running an "outdated" offense, I think you might see another school or two cast an eye in the direction of the option.

So the option is still alive in college football. It's prevalence in the spread shows just how good the option is. We may never see another true option-based offense outside of the service academies or wherever Paul Johnson coaches, but we'll still be able to turn on our TV on Saturdays and see the option at work.