We still have one more week before the Irish take the field in Dublin, but we have reached the end of the Blue-Gold Game reviews.

For the last time, here's the lineup of players we've looked at:

Today, we close with The One Who Must Not Be Slept On, (presumed) starting quarterback of your Notre Dame Fighting Irish, Everett Golson.

Where should we begin with Everett Golson?

Unlike last week when I posed that question out of exasperation, I ask it this time with a twinge of excitement.

Pardon my fan-boyish gushing, but Golson looks like a natural. Gunner Kiel flashed his tools in the spring game but showed that he still needs refinement. Andrew Hendrix displayed a lot of potential but proved that's he's still a project. Tommy Rees continued to frustrate with his inconsistent play. Golson, however, looked very polished in the pocket, had a smooth throwing motion, and glided down the field when he tucked the ball.

That's not to say Golson was perfect in the spring game. His fumble probably caused quite a few painful flashbacks for Irish fans. Ball security has to be Priority Numero Uno for the Irish quarterbacks this season, and inexplicably dropping the ball isn't going to cut it. But he was the only QB not to throw an interception. He didn't even throw any passes that should have been intercepted. And Brian Kelly informed us last week that Golson has only thrown one pick in about 130 pass attempts. Of course those were practice reps, so take that number however you'd like, but it's an encouraging stat nonetheless.

So with my gushing complete, I'm going to highlight two plays that show what Golson brings to the table as a quarterback. 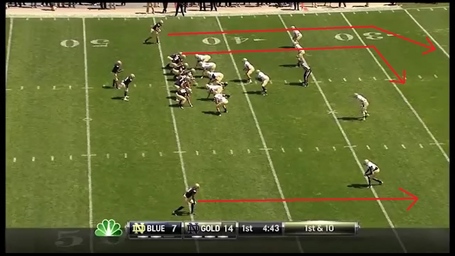 The offense lines up in the shotgun with two tight ends. Tyler Eifert - split out wide - will run a deep post over the middle. The offense only sends three receivers deep, leaving everyone else in for protection. 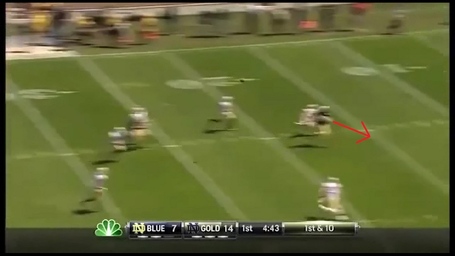 Golson has all day in the pocket and slings a dart to Eifert 30 yards downfield. Eifert has a step on his man and Golson leads him perfectly. This had to be the prettiest ball thrown in the spring game.

Vertical passes like this were mostly nonexistent in the offense last season. Rees did hit Floyd on a couple deep passes over the middle and he got the ball to Eifert on seams routes fairly consistently, but this ball was thrown on a rope with touch. 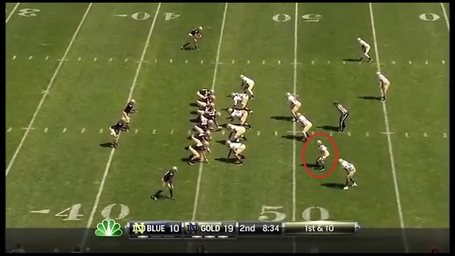 The offense lines up again with two tight ends. 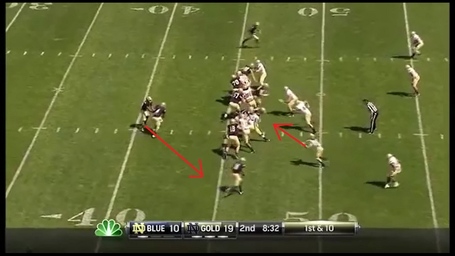 Salvi takes off after Atkinson, so Golson pulls the ball and keeps it. 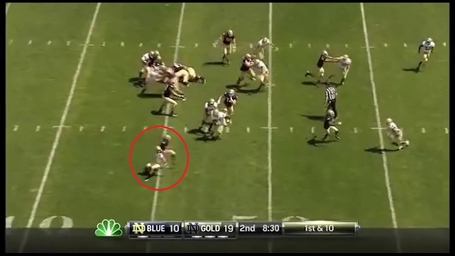 Golson jukes Salvi out his shoes, but the former walk-on throws up an arm and gets enough of Golson to drag him down after just four yards. But if Salvi's flailing doesn't bring him down, Golson almost certainly picks up the first down.

This subject has been talked to death, so I don't think I need to go into too many details about why this play is important. Unless you're running the Air Raid, the spread needs a mobile quarterback. Golson doesn't need to be Denard Robinson and this offense doesn't need to be Oregon East (no matter how awesome that would be). But the ability to pick up yards on read plays and option plays is basically a must in this offense.

So that's my take on Everett Golson. Maybe he'll grab the reins of the Irish offense and take us to new heights and maybe he won't. Maybe he'll light the world on fire or maybe he'll struggle and get supplanted by Gunner Kiel next year. Maybe the light will turn on for Andrew Hendrix and he'll push Golson for playing time.

We'll just have to see. But at the very least, you have to be excited to see what Everett Golson can do as the starting quarterback. That's what August is for, right?