We've reached the penultimate Blue-Gold Game Review. Any guesses on who the last one will be on?

Here are the players you can eliminate from your guesses:

We move on to the player who has caused the most discussion among Irish fans this off-season, rising junior Tommy Rees.

Where should we begin with Tommy Rees?

What we saw in the spring game was the same we saw last season. Some good throws and some bad throws. Some very nice reads and some head-scratchers. Enough mistakes to make you pull your hair out, but enough good plays to make you think "If he only cut down on the turnovers..." Pretty typical Tommy Rees.

But I want to draw your attention to two plays in particular. It may not make sense right away, but bear with me. 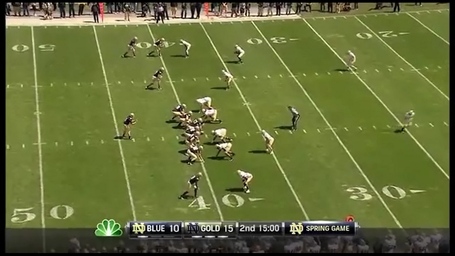 The offense comes out on 3rd and 5 with an empty backfield. Brian Kelly dials up a quarterback draw. Yes, with Tommy Rees in the backfield. 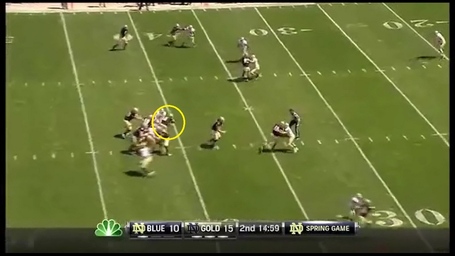 The play call sounds crazy, but look at all the space Rees had. Tyler Eifert and Alex Welch had the only players close to him blocked and he even had Matt Hegarty as a lead blocker. But Rees doesn't exactly explode through the hole and Sheldon Day makes a nice play to get him by the ankles. 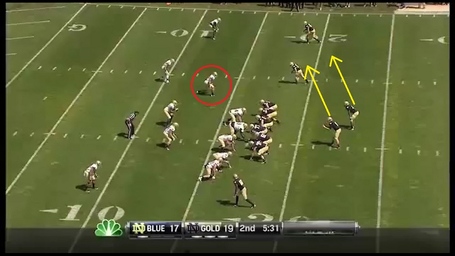 Here, the offense is in the red zone with three wide receivers and George Atkinson in the backfield. Kelly calls a speed option. Again, Tommy Rees is still the quarterback. Ben Councell is the optioned defender. 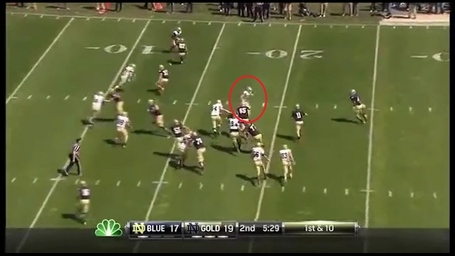 What Tommy needs to do right here is attack the optioned defender by cutting upfield. If Councell follows him, he should pitch the ball to Atkinson. If Councell widens to cover Atkinson, he can keep the ball and gain some yards. There was room to run if he had run the play correctly. 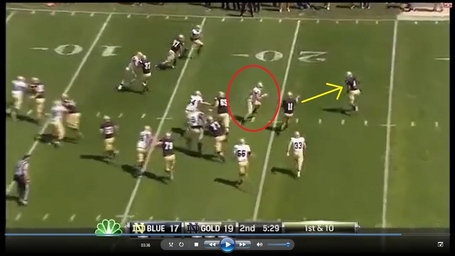 Instead, Rees slow-plays it and keeps going outside, bringing Councell with him. By the time Rees finally decided to pitch the ball, Atkinson is only a few feet away from him and Councell could have still made a play. Of course, it doesn't matter because Atkinson dropped the pitch. It should be noted that Rees's pitch was fine; this turnover was not on him.

So why did I choose these plays to highlight? Why does it matter if Rees was bad at running the ball? Everyone knew that.

Well, it matters if the quarterback is expected to make these types of plays. Brian Kelly and Chuck Martin have expressed their desires to get the quarterback more involved in the run game. If they expect the quarterback to pick up five or six yards on a draw or run the speed option correctly, then Rees needs to be able to do that.

I want to make it clear that I did not choose these plays as a way of pointing out Tommy Rees doing something poorly. These are just areas where he needs to improve if he wants to be the starting quarterback (that, and not throwing balls at defenders, but you knew that).

For as much flack as Rees gets about his athleticism, he's a starting quarterback at an FBS college, so I have to think he's actually a pretty good athlete. I know he's not perfectly suited for this type of offense, but if he works at it and starts running the option correctly and gets through the hole faster on draws, the offense could open up for him.

But as a fan, I also look at those two plays and think about how many yards Andrew Hendrix or Everett Golson (or even Gunner Kiel) would have picked up. Tommy Rees doesn't seem to fit the mold Brian Kelly has at quarterback if the QB is expected to be. He's not a lost cause but he does need more work. In the end, it will be up to the coaches to decide which quarterback best fits into their vision for the offense.